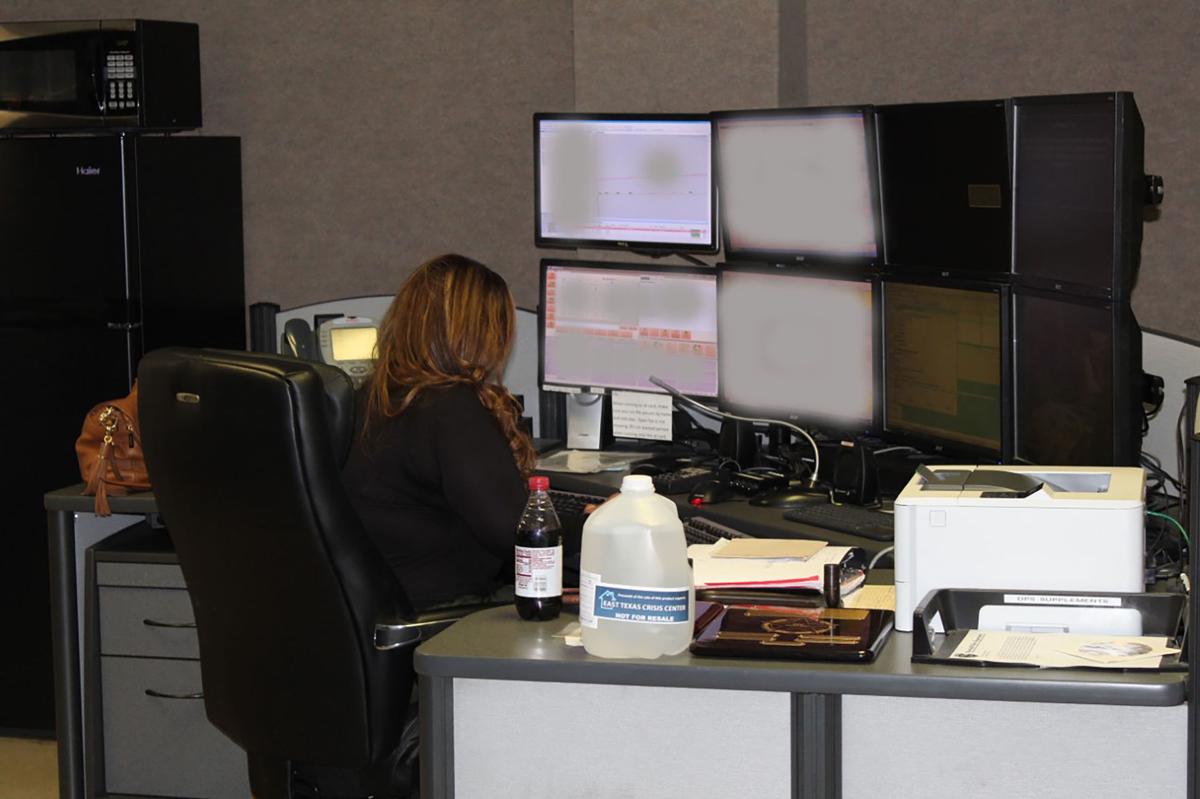 Dispatcher Maria Jones works at her desk in the Marshall Police Department. 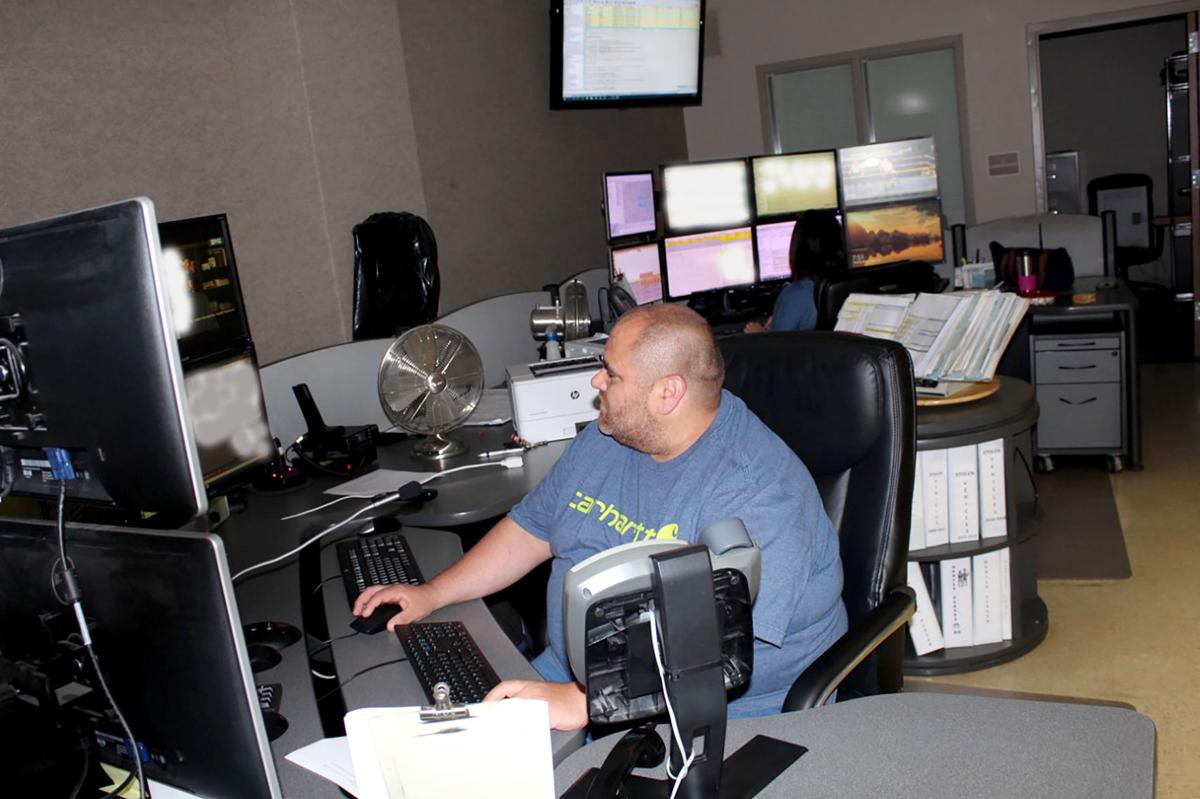 Dispatchers David Calhoun and Tina Rutherford work at their desks at the Marshall Police Department, with Calhoun working the fire side and Rutherford on police. 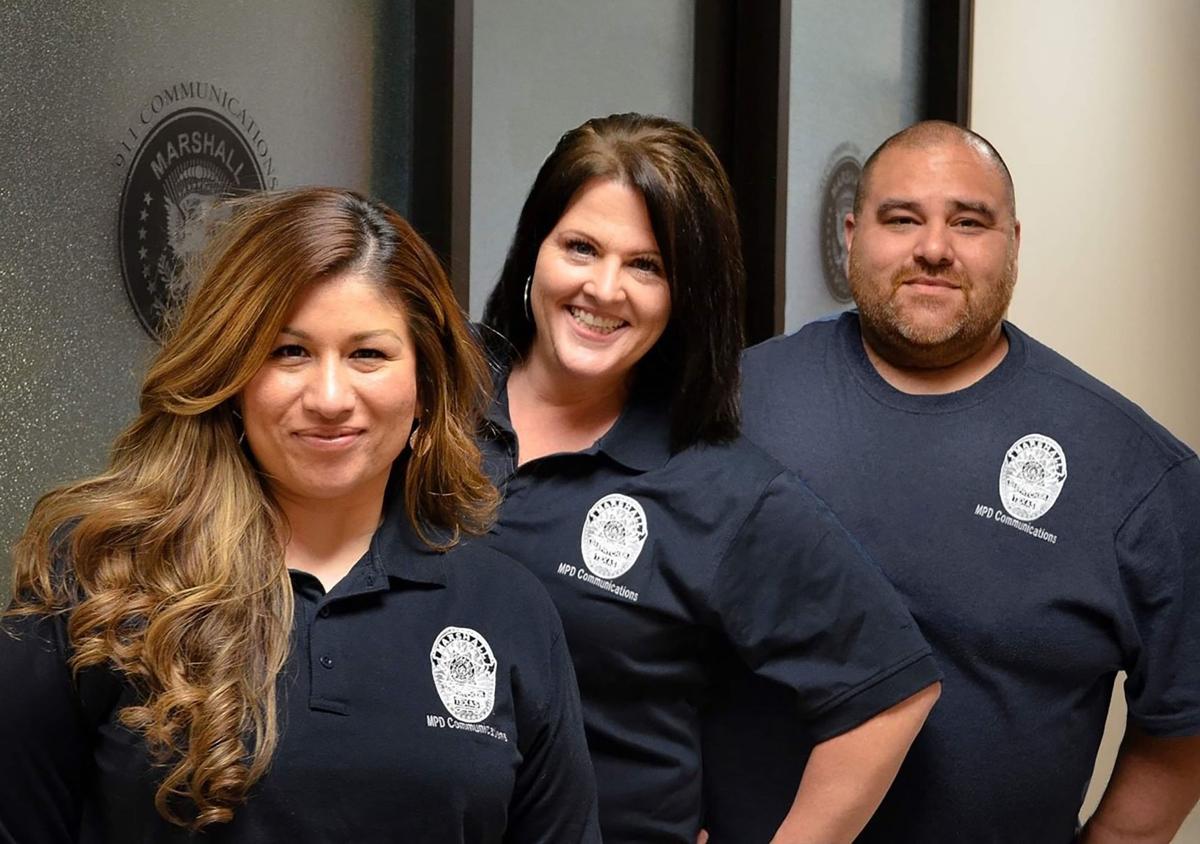 Dispatcher Maria Jones works at her desk in the Marshall Police Department.

Dispatchers David Calhoun and Tina Rutherford work at their desks at the Marshall Police Department, with Calhoun working the fire side and Rutherford on police.

Everyone who works at the Marshall Police Department seems to agree on one thing, David Calhoun, Tina Rutherford and Maria Jones are some of the best dispatchers the department has ever had.

“Our telecommunicators are an essential part of the operations of the Marshall Police Department and Fire Department. They are the first voice a person in distress hears and are the calm in the storm,” said Marshall Police Chief Cliff Carruth, “We have an exceptional team working as emergency telecommunicators, sending the help that our citizens need. We can’t thank them enough for everything they do. They never get the recognition that they deserve, but without them we would not be able to do our jobs as police officers, EMT’s and fire fighters.”

MPD has a number of dispatch operators who work to connect the community with the resources that they need, while also be sure to keep the officers and other first responders safe. Calhoun, Rutherford and Jones are some of the best.

“It’s a very different experience, dealing with the public face to face versus on the phone, when we speak to them there’s a different level of distance that you don’t have as an officer, it really makes you realize how important each of our roles is,” Calhoun said.

Having been interested in police work since he was in high school, Calhoun said that he started working as a dispatcher right out of school at 18 years old, and has been there ever since.

Rutherford has been working as an operator for five year along side Calhoun. The two have even become friends, both stating that their favorite hobby is going to crossfit together.

“We love our crossfit family, we cannot wait to get back to it,” Rutherford said.

Jones is the newest member of the group, joining the team just under a year ago. But what she lacks in experience, Rutherford and Calhoun both agree she makes up in skill.

“It has been great working with Maria, she has really fit in with us right away,” Rutherford said. “I remember one call, I could barely understand what the person on the other end of the phone was saying. Maria was able to take over, and speak to them in Spanish, it was really amazing.”

In fact, Jones said that one of the reasons why she was interested in becoming a dispatcher was because she felt that her ability to speak Spanish and English fluently would be of service to the community.

“I know even in my family there are people who do not speak English, or it is not their first language. In an emergency situation, if there is no one who can speak the language, we have to use a translation software that takes twice as long. Or the family will try to have a child translate for them,” Jones said.

Calhoun agreed that in his experience, having someone who is bilingual working as a dispatcher is a great resource, and provides an essential service to the community.

On an average shift the three dispatchers service the Marshall Police and Fire Department’s on all calls, along with ambulance services for Harrison County.

They work in 12 hour shifts, answering every call into 911 and connecting the community with the first responder services that they need.

“Regardless of what they are told by a caller, they have to remain calm and send the help that is needed while trying to gather information so that the can deploy the appropriate assets,” Carruth said. “They never get the recognition they deserve.”

The dispatchers jobs have gone through a number of recent changes, due to the outbreak of COVID-19 and the new installation of Mobile Data computers consisting of cradle point mobile routers and wireless in all Marshall patrol vehicles.

“The new computers haven’t taken away from our jobs, but they have cleared up the airways and made communication with officers faster, and clearer. We can also keep track of them now, which helps us keep them safe,” Rutherford said. “That is always my priority, making sure my officers are safe.”

The new technology update has also added the ability for the local community to send a text to 911, for use in emergency situations where calling may be more dangerous, dispatchers receive the message on their screens and are able to respond.

During the unprecedented current situation of the outbreak of COVID-19 the dispatchers are the only people who are able to get information to officers about potential contagion risks, while also working with the community members to keep them and the officer safe.

Calhoun said that dispatchers now have to be sure to ask community members a series of questions pertaining to symptoms, and request that they meet the officer outside as often as possible.

“Really, what makes us good at our jobs is that the officers trust us. It is important to keep the community safe, and when your officers trust you they can go into a situation without fear because they know you have their back,” Rutherford said.

She explained that one call that she would never forget was last year when Officer Zach Lastra was injured in the line of duty.

“Just today was his first day back after he injured his arm,” Rutherford said on Wednesday, “I remember I was working and I got the call that he was injured, I had to work to coordinate getting him assistance, while also still answering all of the other 911 calls coming in. Because that’s the thing, on a serious emergency situation other people in the community are not aware that that is going on, so they are continuing to call 911 at the same time.”

All the dispatchers agreed that the key to working as a dispatcher is simply, to remain calm, and to take control of any situation.

“It’s amazing, really, to do this job. I care a lot about the community, and this is my way to give back to them,” Jones said.

Guidance for Dental Settings During the COVID Response

During this COCA call, presenters will provide an overview of the updated guidance for dental settings, including recommendations for resuming non-emergency dental care during the COVID-19 pandemic. Presenters also will discuss strategies for dental healthcare facilities to optimize personal…