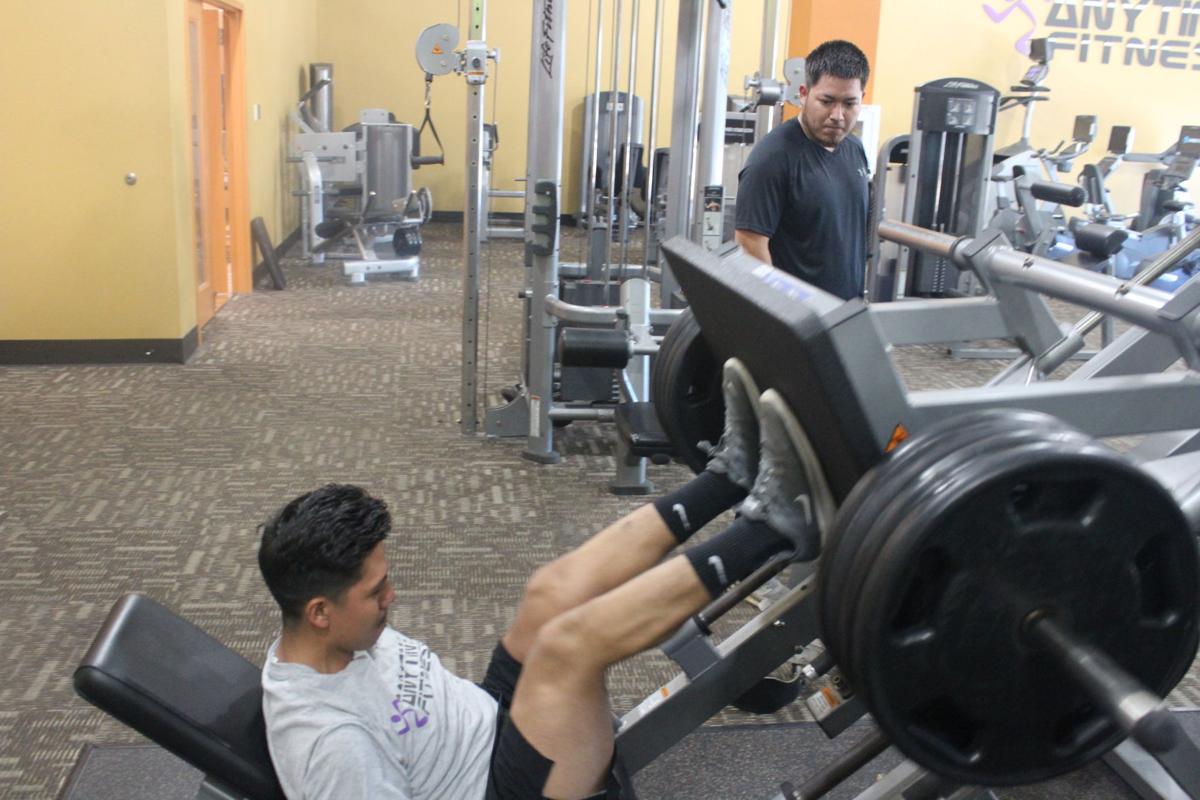 Agustin Perez and Daniel Sanchez work out at Anytime Fitness, at 1806 E End Blvd N., as the gym reopens nearly two months after the COVID-19 shutdown. 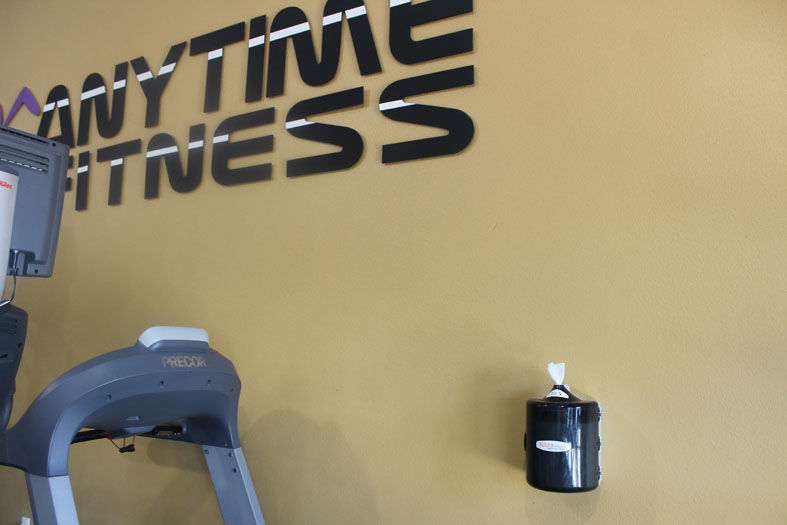 Anytime Fitness in Marshall was one of many gyms across the state to reopen Monday, following the two-month long COVID-19 shutdown. Sanitary stations are available to help ensure the safety of members. 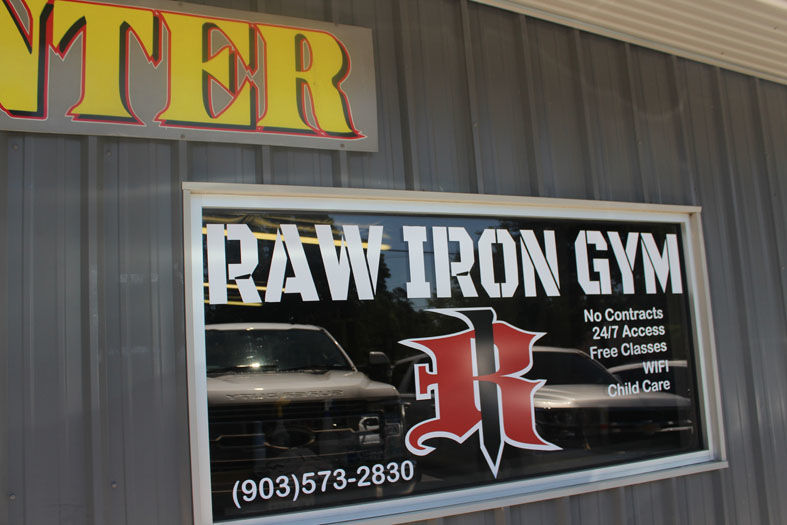 Marshall’s new Raw Iron Gym, located at 2520 S. Washington Ave., was one of many gyms across the state to reopen Monday, following the two-month long COVID-19 shutdown. 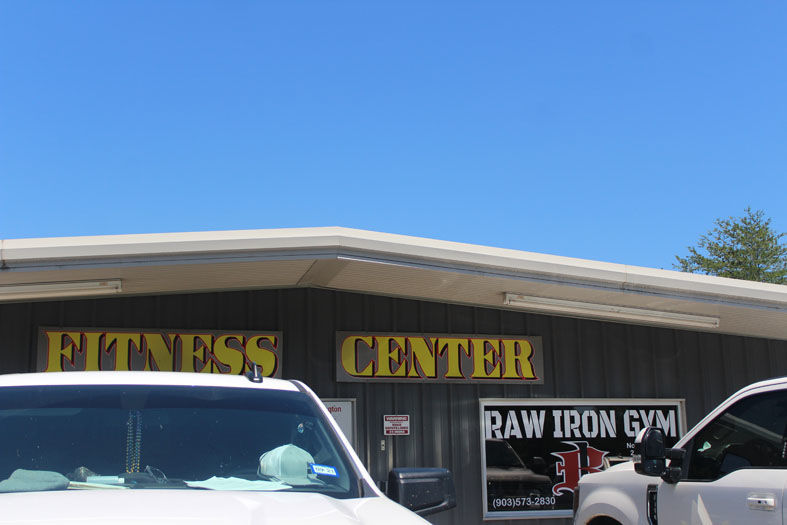 Marshall's new Raw Iron Gym, located at 2520 S. Washington Ave., was one of many gyms across the state to reopen Monday, following the two-month long COVID-19 shutdown.

Agustin Perez and Daniel Sanchez work out at Anytime Fitness, at 1806 E End Blvd N., as the gym reopens nearly two months after the COVID-19 shutdown.

Anytime Fitness in Marshall was one of many gyms across the state to reopen Monday, following the two-month long COVID-19 shutdown. Sanitary stations are available to help ensure the safety of members.

Marshall’s new Raw Iron Gym, located at 2520 S. Washington Ave., was one of many gyms across the state to reopen Monday, following the two-month long COVID-19 shutdown.

Marshall's new Raw Iron Gym, located at 2520 S. Washington Ave., was one of many gyms across the state to reopen Monday, following the two-month long COVID-19 shutdown.

Two months after shutting down amid the global COVID-19 pandemic, gyms across the state, including locally, reopened on Monday, with safety restrictions in place.

“Right now, we’re (operating) along with the rest of the state,” said Dustin Wilson, manager at Anytime Fitness in Marshall. “We did get the go-ahead last Friday evening to go ahead and open.”

He said they are following and staying abreast of all of the latest directives of Gov. Greg Abbott regarding the reopening.

In addition to operating at the mandated 25 percent occupancy, Wilson said Anytime Fitness is limiting members’ workout to an hour at a time, as a precautionary measure.

Additionally, the 24-hour gym is advising members to wear gloves and masks, but not requiring.

He said they are also doing extra cleaning behind members’ too.

“We’re making sure we wipe down regularly,” said Wilson.

He said the gym’s first and primary concern is the safety, health and wellness of its members.

“We wouldn’t do anything to jeopardize their health and fitness,” said Wilson.

The manager said Anytime Fitness is excited about the reopening.

“Everybody is really excited to get in and going again,” he said.

“It feels great to come,” Perez said as he worked out Monday while Sanchez spotted him.

“We miss the gym,” said Sanchez.

Raw Iron Gym, located at 2520 S. Washington Ave., was also excited about Monday’s reopening. The gym, which took over the former Heavyweights Gym on March 1, had to shutdown days later after its March 14 grand opening due to the global crisis.

“It was horrible,” Aaron Baxter, owner of the new 24-hour gym, said of having such a short stint before shutdown.

Baxter said they, too, are taking extra s{span}anitization{/span} and safety measures at Raw Iron.

“We had to minimize people to 25 percent capacity. We’ve been mopping and cleaning and wiping everything down,” he said. “We’ve had Lysol wipes. We’ve got some towels and cleaners and wipe down the benches before and after people use it.

“We’re trying to keep everything sanitized; and then we’re encouraging everyone to maintain their distance,” said Baxter.

Baxter said the Marshall location is one of eight Raw Iron gyms in East Texas.

“We’re definitely excited about being able to reopen,” Baxter said.

He’s been keeping tabs on the numbers of coronavirus cases in the county and the recoveries.

“We’ve been watching the numbers here,” said Baxter. “They seem to be getting lower each day, at least some more recoveries than people that are sick, so we’re glad about that.”

Being a new gym, Baxter said they don’t have many memberships yet, thus, social distancing should be easy to maintain.

“We don’t have a whole lot of members yet, so the capacity thing is not really going to be an issue for us at this point,” said Baxter. “People kind of trickle in all day, so we’ve got plenty of room for people to come in.”

“We’re glad to get back open,” he reiterated.

“Local officials recently announced that gyms can reopen. While we look forward to reopening and welcoming you back into the club soon, after careful consideration, we’ve decided to remain closed as we continue to evaluate local guidelines and restrictions,” the Marshall location stated on its voicemail.

“We are working hard to get ready to welcome you back and provide you with a clean, safe and judgment-free workout experience you love,” the 24-hour gym told customers.

The club noted on its website safety measures that they are putting in place, including touchless check-in, which allows members to avoid unnecessary contact by checking in using their digital key tag on the Planet Fitness app. Additionally, each cleaning station throughout the club will also be stocked with disinfectant spray and paper towels. Hand sanitizer stations will also be replenished often.

Planet Fitness also advised that some cardio and strength machines won’t be available for use in order to give members extra breathing room.

The gym is also asking members to please be “cleansiderate” upon their return by washing their hands for 20 seconds before and after using the equipment, by wiping down equipment before and after each use, and by keeping a safe distance by “putting an imaginary treadmill — or two —between themselves and others. And instead of a high-five for encouragement, the gym urges giving a thumbs up.

Planet Fitness said they will keep members informed via email on when the club is ready to reopen safely and responsibly. For now, the gym said it has proactively frozen all memberships and will not charge members any fees while closed.

In the meantime, Planet Fitness urges its members to “stay healthy and be well.”

Planet Fitness noted updates will be posted on the club’s page on Planetfitness.com or the gym’s Facebook page.

Information on Raw Iron and its reopening can also be viewed on Raw Iron’s Facebook page.

“Right now is a good time for people to take into consideration their health and well-being,” said Wilson.

He said nutrition and exercise has been highly recommended by physicians to help strengthen the immune system to fight against the coronavirus.

“We’d like to get to help people where immune systems are better,” Wilson said of Anytime Fitness.

On April 27, 2021, CDC announced an international funding opportunity for partners with experience in disease detection and response to infectious disease and antimicrobial threats in health care and response, and/or antibiotic and antifungal resistance across the One Health spectrum. This v…

AMR in a Changed World: Building Resilient Systems for Today and Tomorrow

AMR in a Changed World: Building Resilient Systems for Today and Tomorrow