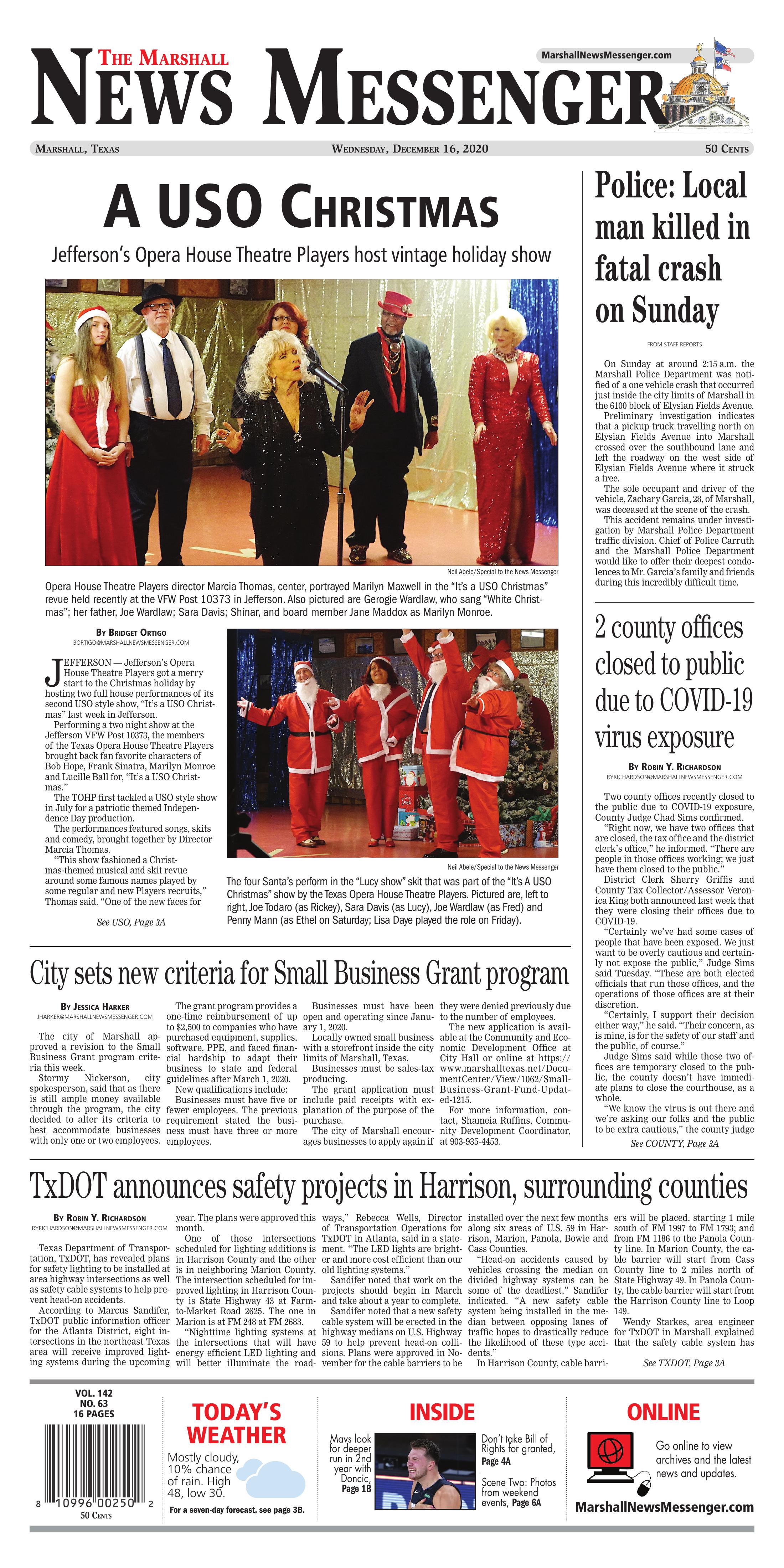 Neil Abele/Special to the News Messenger

The four Santa’s perform in the “Lucy show” skit that was part of the “It’s A USO Christmas” show by the Texas Opera House Theatre Players. Pictured are, left to right, Joe Todaro (as Rickey), Sara Davis (as Lucy), Joe Wardlaw (as Fred) and Penny Mann (as Ethel on Saturday; Lisa Daye played the role on Friday). The skit also included Santa, Hollis Shadden, hiding behind the Christmas tree.

The performances featured songs, skits and comedy, brought together by Director Marcia Thomas.

“This show fashioned a Christmas-themed musical and skit revue around some famous names played by some regular and new Players recruits,” Thomas said. “One of the new faces for this production was a Frank Sinatra sound alike that hails from another city. He goes by the name of ‘Gozz’ and he’s got the closest Sinatra sound to be heard around here in years.”

Jane Maddox returned to reprise her much-acclaimed impersonation of Marilyn Monroe in some of the songstress’ most famous songs including “Santa Baby”. Thomas again portrayed Marilyn Maxwell, one of Bob Hope’s favorite blondes during his years performing USO entertainment to U.S. troops.

To find out more about the TOHP or to volunteer in their next production, visit their website at www.jeffersonoperahousetheatreplayers.com

The city of Marshall approved a revision to the Small Business Grant program criteria this week.

Stormy Nickerson, city spokesperson, said that as there is still ample money available through the program, the city decided to alter its criteria to best accommodate businesses with only one or two employees.

The grant program provides a one-time reimbursement of up to $2,500 to companies who have purchased equipment, supplies, software, PPE, and faced financial hardship to adapt their business to state and federal guidelines after March 1, 2020.

Businesses must have five or fewer employees. The previous requirement stated the business must have three or more employees.

Businesses must have been open and operating since January 1, 2020.

Locally owned small business with a storefront inside the city limits of Marshall, Texas.

Businesses must be sales-tax producing.

The grant application must include paid receipts with explanation of the purpose of the purchase.

The city of Marshall encourages businesses to apply again if they were denied previously due to the number of employees.

The new application is available at the Community and Economic Development Office at City Hall or online at https://www.marshalltexas.net/DocumentCenter/View/1062/Small-Business-Grant-Fund-Updated-1215.

Texas Department of Transportation, TxDOT, has revealed plans for safety lighting to be installed at area highway intersections as well as safety cable systems to help prevent head-on accidents.

According to Marcus Sandifer, TxDOT public information officer for the Atlanta District, eight intersections in the northeast Texas area will receive improved lighting systems during the upcoming year. The plans were approved this month.

“Nighttime lighting systems at the intersections that will have energy efficient LED lighting and will better illuminate the roadways,” Rebecca Wells, Director of Transportation Operations for TxDOT in Atlanta, said in a statement. “The LED lights are brighter and more cost efficient than our old lighting systems.”

Sandifer noted that work on the projects should begin in March and take about a year to complete.

Sandifer noted that a new safety cable system will be erected in the highway medians on U.S. Highway 59 to help prevent head-on collisions. Plans were approved in November for the cable barriers to be installed over the next few months along six areas of U.S. 59 in Harrison, Marion, Panola, Bowie and Cass Counties.

“Head-on accidents caused by vehicles crossing the median on divided highway systems can be some of the deadliest,” Sandifer indicated. “A new safety cable system being installed in the median between opposing lanes of traffic hopes to drastically reduce the likelihood of these type accidents.”

Wendy Starkes, area engineer for TxDOT in Marshall explained that the safety cable system has three to four strands of ¾-inch high tension cable that are supported by metal posts.

“The cables are suspended up to 30 inches above the ground and are intended to catch vehicles in the median before they get into oncoming traffic,” Starkes stated in a press release. “Although no system can prevent all crossover accidents, this new cable system looks very promising in preventing most and has been tested to hold back even a semi-truck when hit at a glancing blow.”

Work on the project is expected to begin in February 2021 and take about 18 months to complete, Starkes said.

Sandifer pointed out the advantages the new cable system has compared to the typical concrete median barrier.

“The primary advantage is cost—concrete barriers can cost more than twice as much, so funding for this type project can go more than twice as far in erecting safety barriers,” he noted. “The cable system also has more give, slowing the vehicle down more gradually and is less likely to cause vehicles to ricochet back into traffic.”

Another plus is the maintenance. Starkes said the cables rarely ever break during crashes and the posts are easily replaced to quickly repair the system.

On Sunday at around 2:15 a.m. the Marshall Police Department was notified of a one vehicle crash that occurred just inside the city limits of Marshall in the 6100 block of Elysian Fields Avenue.

The sole occupant and driver of the vehicle, Zachary Garcia, 28, of Marshall, was deceased at the scene of the crash.

Two Harrison County offices, the tax office and district clerk's office, recently closed to the public due to COVID-19 exposure, but the courthouse remains open with caution.

“Right now, we have two offices that are closed, the tax office and the district clerk’s office,” he informed. “There are people in those offices working; we just have them closed to the public.”

District Clerk Sherry Griffis and County Tax Collector/Assessor Veronica King both announced last week that they were closing their offices due to COVID-19.

“Certainly we’ve had some cases of people that have been exposed. We just want to be overly cautious and certainly not expose the public,” Judge Sims said Tuesday. “These are both elected officials that run those offices, and the operations of those offices are at their discretion.

“Certainly, I support their decision either way,” he said. “Their concern, as is mine, is for the safety of our staff and the public, of course.”

Judge Sims said while those two offices are temporary closed to the public, the county doesn’t have immediate plans to close the courthouse, as a whole.

“We know the virus is out there and we’re asking our folks and the public to be extra cautious,” the county judge said. “We want to try to operate as normal as possible and still be safe.”

King, tax collector/assessor, said the Marshall office will reopen on Thursday. Office hours will be 8:30 a.m. to 4:30 p.m., and closed for lunch from noon to 1 until the 2021 new year.

“I urge everyone that can to please mail in their vehicle renewals and tax payments or utilize the outside dropbox,” said King.

“It is very important that I protect the office staff, as well as the citizens of Harrison County,” she said.

Anyone that needs immediate in-person assistance prior to the Marshall office’s reopening to the public Thursday can visit the Hallsville or Waskom tax offices.

Last week, district clerk Sherry Griffis noted on the District’s Facebook page to email sherry@co.harrison.tx.us, if there was an emergency matter for her office to address.

Click and hold your mouse button on the page to select the area you wish to save or print. You can click and drag the clipping box to move it or click and drag in the bottom right corner to resize it. When you're happy with your selection, click the checkmark icon next to the clipping area to continue.