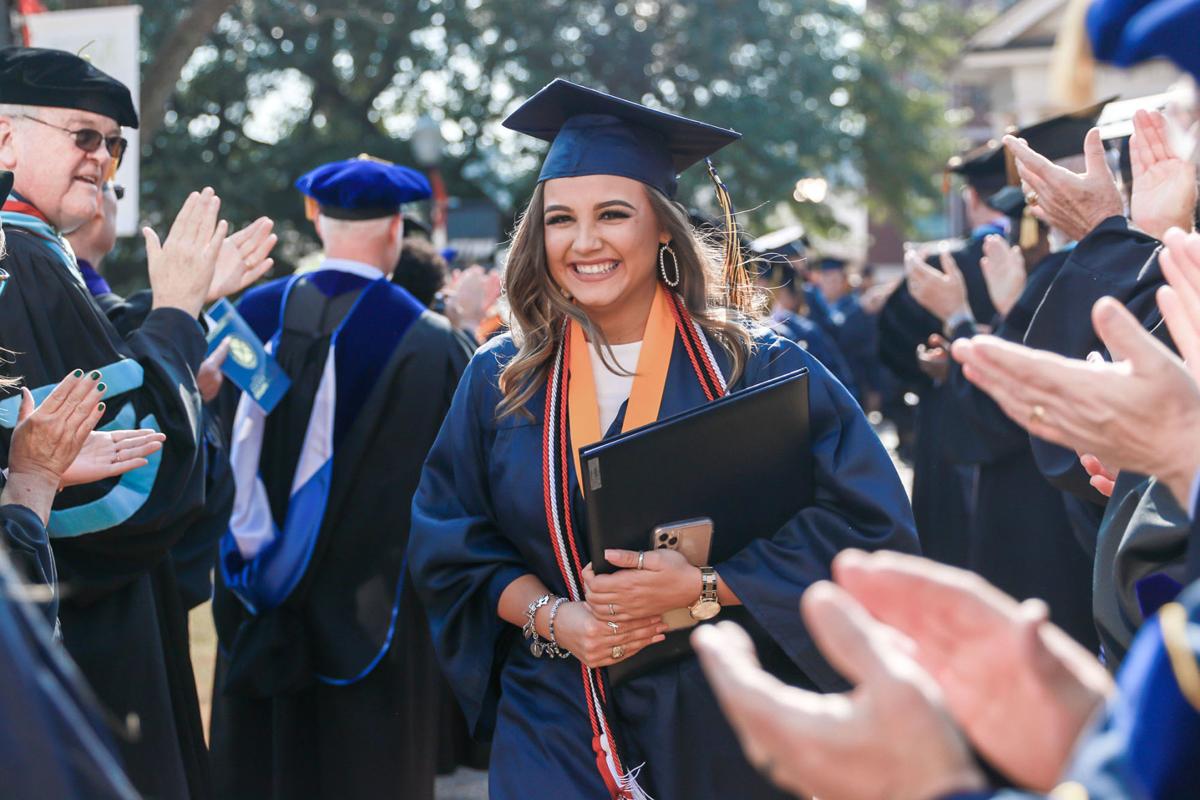 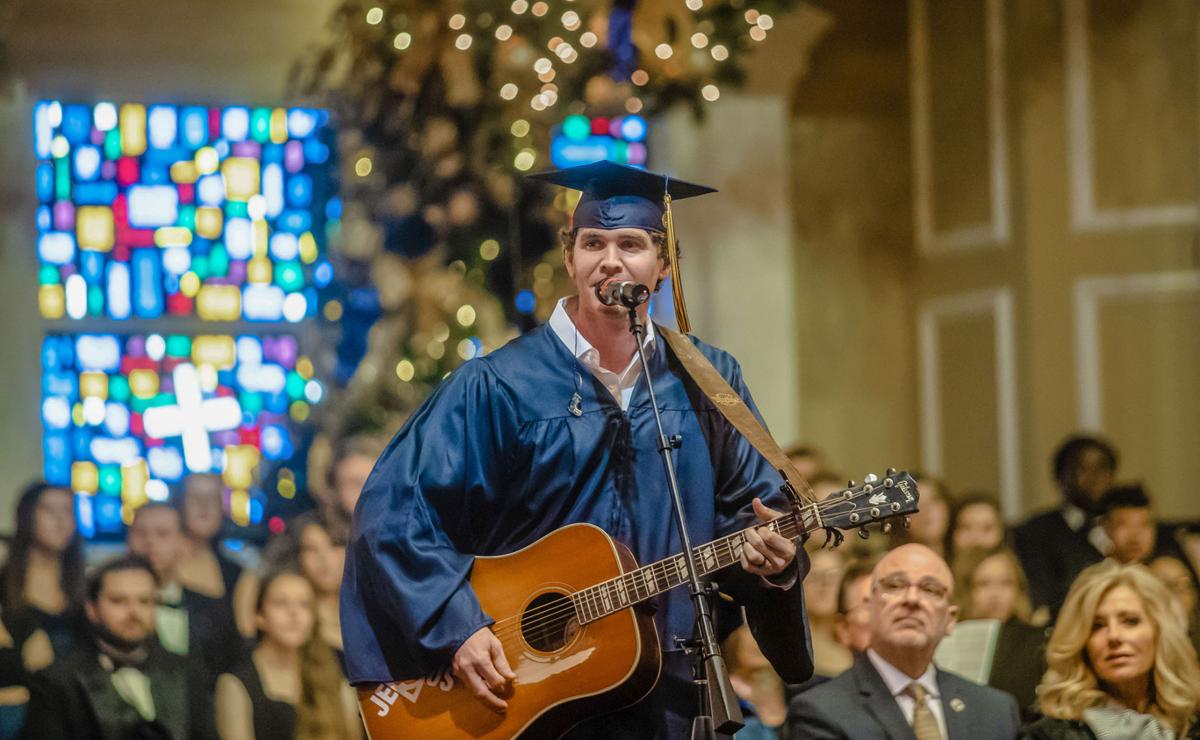 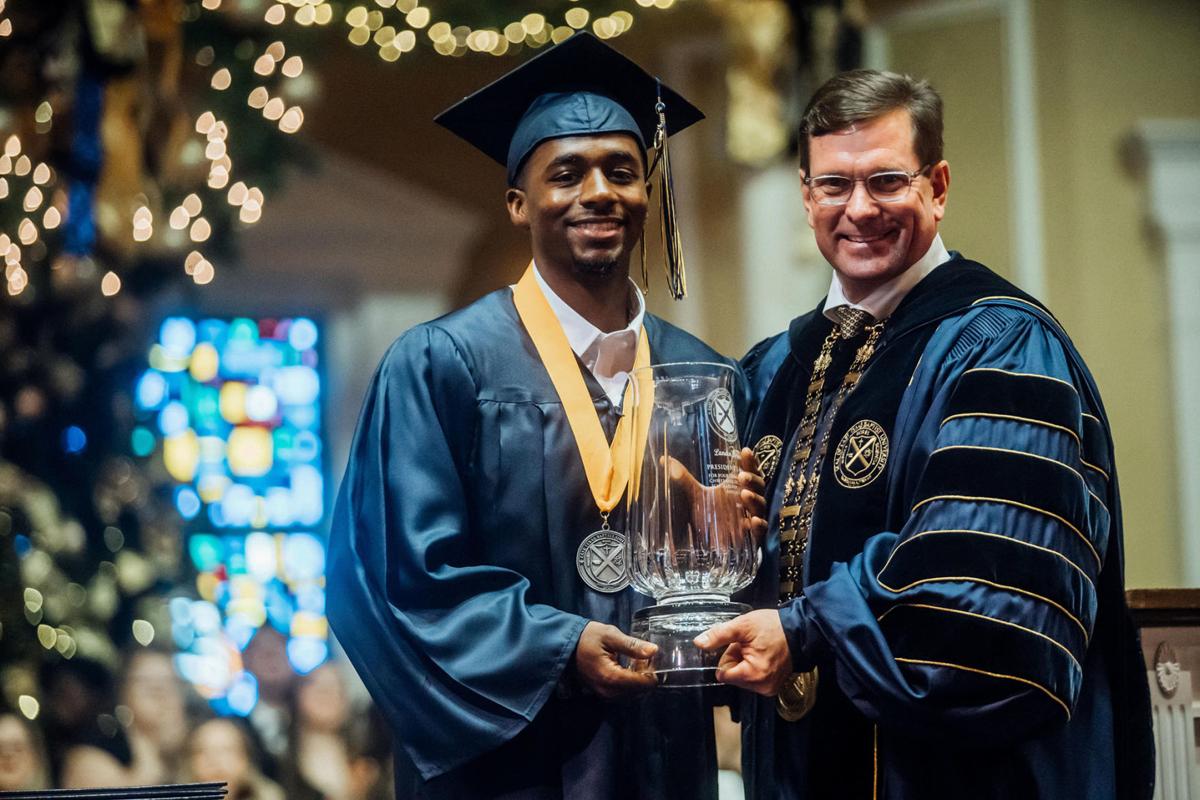 ETBU Bachelor of Science in Kinesiology graduate Landin Brown receives the President’s Award for his commitment to Christ in the classroom, on the basketball court, and across campus. 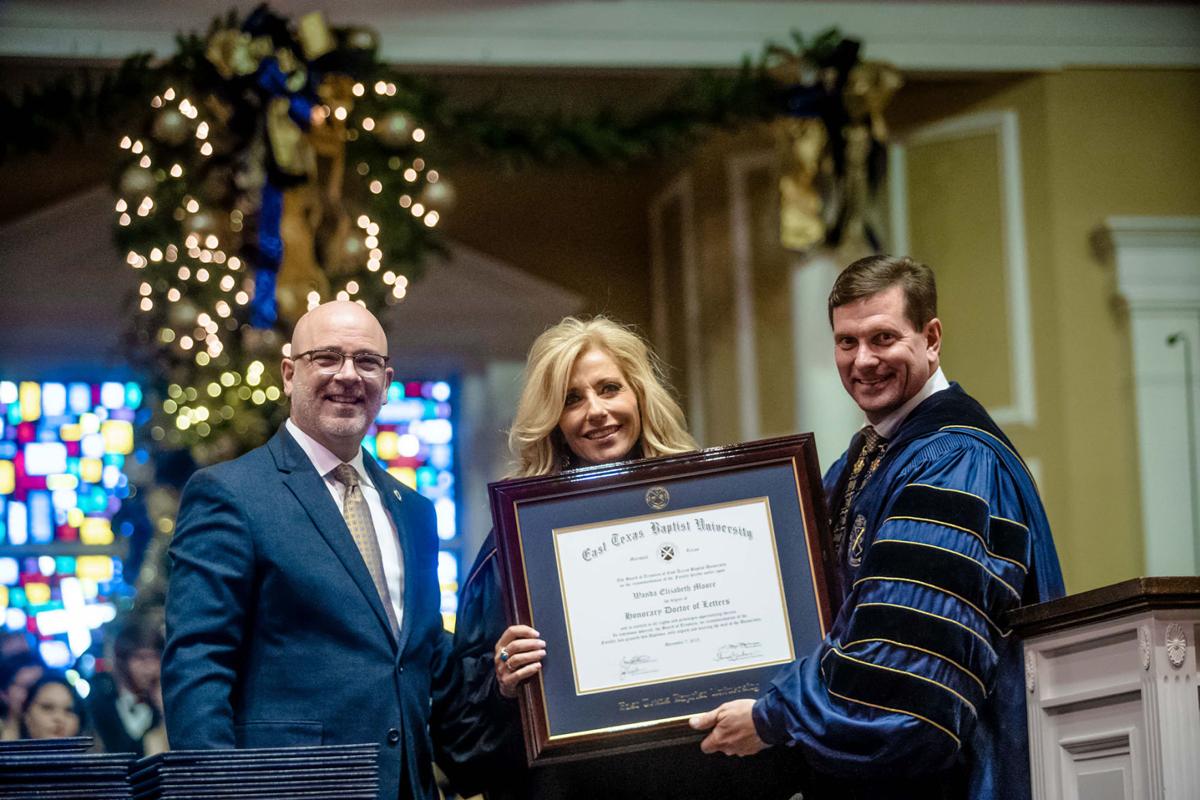 ETBU Bachelor of Science in Kinesiology graduate Landin Brown receives the President’s Award for his commitment to Christ in the classroom, on the basketball court, and across campus.

“East Texas Baptist University is committed to being a distinctively Christ-centered University, dedicated to glorifying God by transforming students into Christian servant leaders through their time here on the Hill,” Dr. Blackburn said. “It is our prayer that our graduates use their intellectual and spiritual gifts to transform the world for the glory of God in their vocational callings.”

Special guest and recognized Christian author and speaker Beth Moore traveled to the Hill to present the keynote address during the ceremony. With a love for writing and a call to Kingdom work, Beth Moore boasts an extensive career in ministry including the founding of Living Proof Ministries, multiple published books and Bible studies, and she can even be seen teaching Bible studies on the television program Living Proof with Beth Moore, aired on the Trinity Broadcasting Network. During her address, Moore encouraged graduates to embrace the timing of their endeavors, fully serving the Kingdom for the sake of their generation.

“What we are doing today is called a commencement. Commence means to begin, to start. We don’t always have the luxury of knowing that a brand new beginning is in front of us; that change is in the wind and that the wind is a hurricane. You do have that luxury in this moment,” Moore said. “You are of this generation on divine purpose, in this current culture. You have been sent not to be of the world, but to be in this world, to serve faithfully in the name of Jesus. To be alert, to be astute, to be brave, to be bold in love and truth. You are carriers of the Gospel, and you have been called to speak into this generation. Graduates, go therefore and invade the globe, embrace your new beginning.”

On behalf of East Texas Baptist University, Dr. Blackburn presented Moore with an Honorary Doctorate of Letters for her impact on countless lives in our nation and around the world through Christian ministry.

“Most assuredly, Dr. Moore, we recognize it is your time for God,” Dr. Blackburn added. “We see, hear, and discern the empowerment of the Holy Spirit’s anointing on you to proclaim the Gospel of Jesus Christ and to encourage believers in their discipleship and spiritual development.”

Each commencement, the President’s Award is given to the graduating ETBU student who is the best representation of a Christian leader, scholar, and servant. Graduating Magna Cum Laude, ETBU Bachelor of Science in Kinesiology graduate Landin Brown received the President’s Award for his commitment to Christ in the classroom, on the basketball court, across campus, and throughout the community. While at ETBU, Brown has spent many hours volunteering at the Boys and Girls Club of Marshall, as well as Marshall Junior High School. He is an active member of Greater Macedonia Missionary Baptist Church and of the Fellowship of Christian Athletes. Brown was recognized as a leader on campus as part of Leadership Fellows and has served as a captain of the Men’s Basketball Team, where he has been identified as an influential and encouraging spiritual leader among his teammates.

“Coming out of high school, I didn’t know if I was going to go to college,” Brown said. “I knew if I went to college, I wanted to play basketball, but I didn’t have an offer at the time. My mentor encouraged me and told me to never give up on my dream, and that’s how I was called to ETBU. This university has prepared me to thrive by giving me the opportunity to be a servant leader.”

“I have many mixed emotions regarding graduation,” Bachelor of Science in Mass Communication graduate Claire Alexander said. “I am happy to close this chapter, although I also feel sad to leave the Hill behind. A degree from ETBU means that I have completed a Christ-centered education for my future, and I will forever be grateful for that.”

“I reconnected with my youth minister from several years ago while his son was attending ETBU. I told him my status and that I was interested in going back to school, so he referred me to ETBU,” Grimes said. “My wife and I had the same schedule and took the same classes, so we had each other as accountability and study partners. I always tell everybody that I’ve been to several colleges over the years, and this one is by far the best in every aspect. I hope our kids end up going to school here too. It’s been a great experience.”