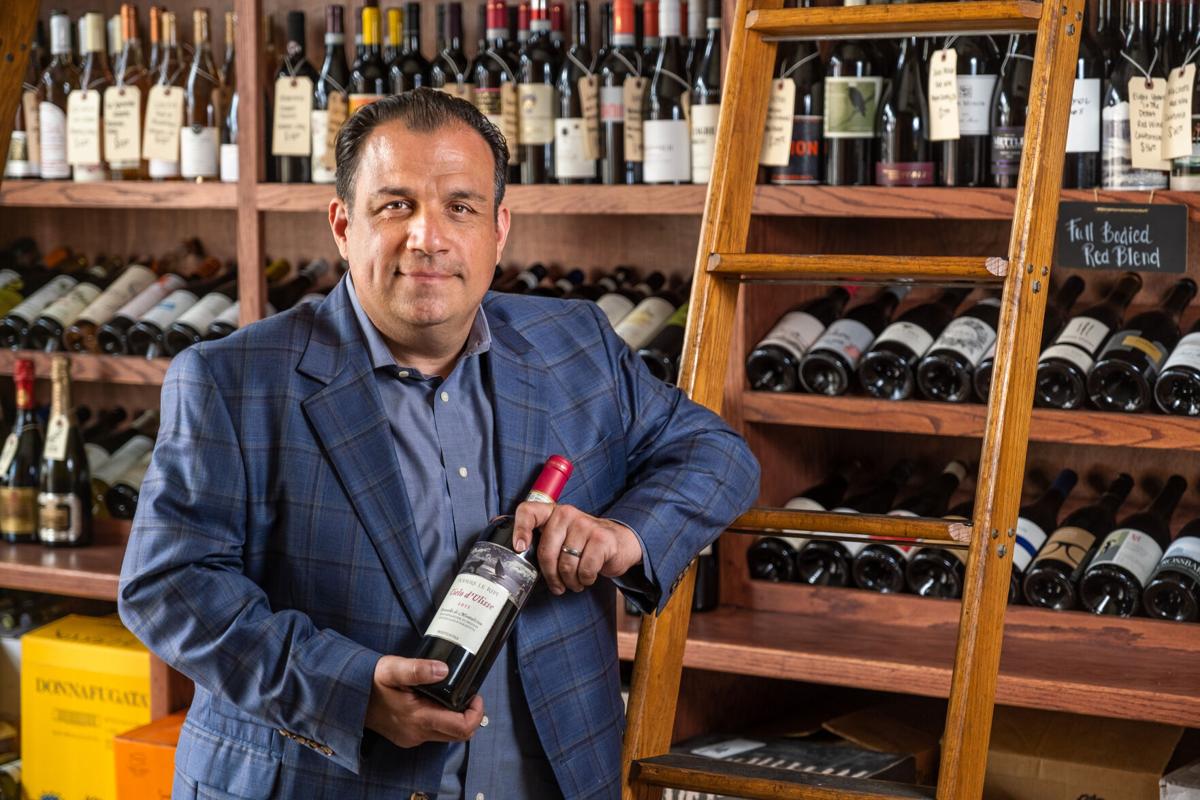 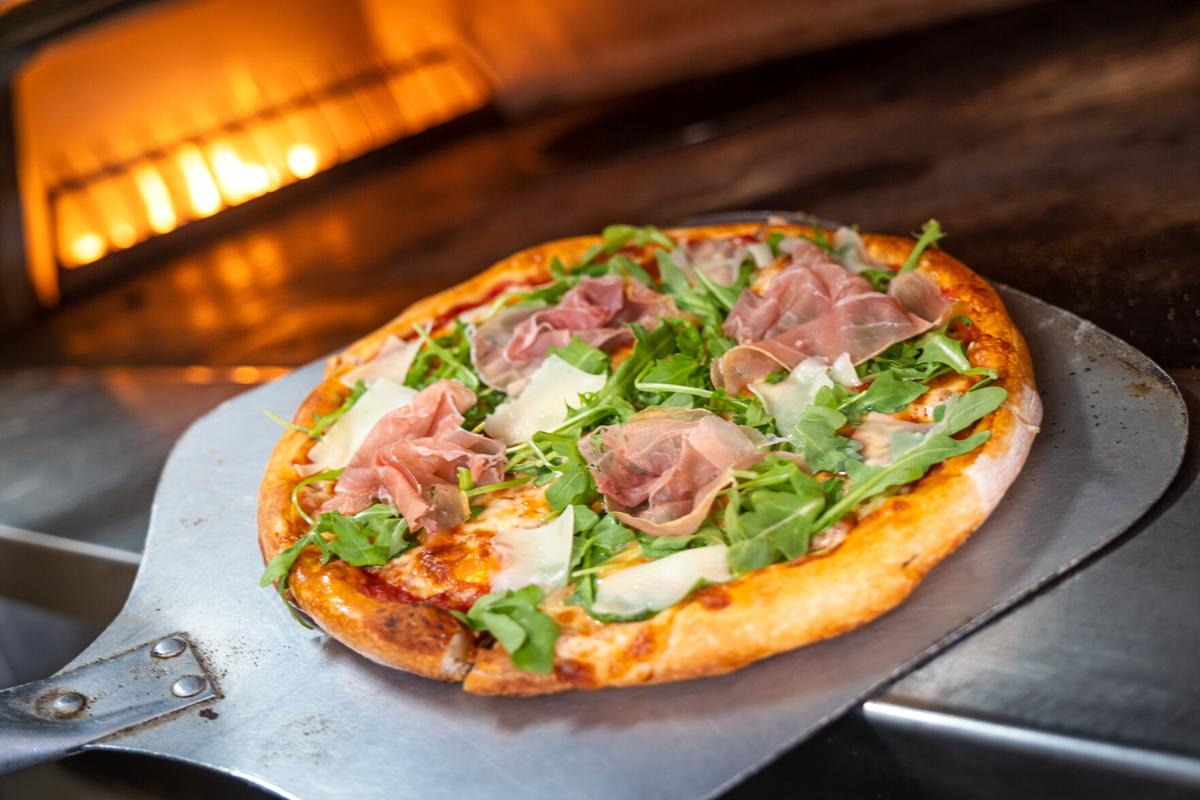 Prosciutto and arugula pizza at Pazzeria by Pietro's in Marshall. 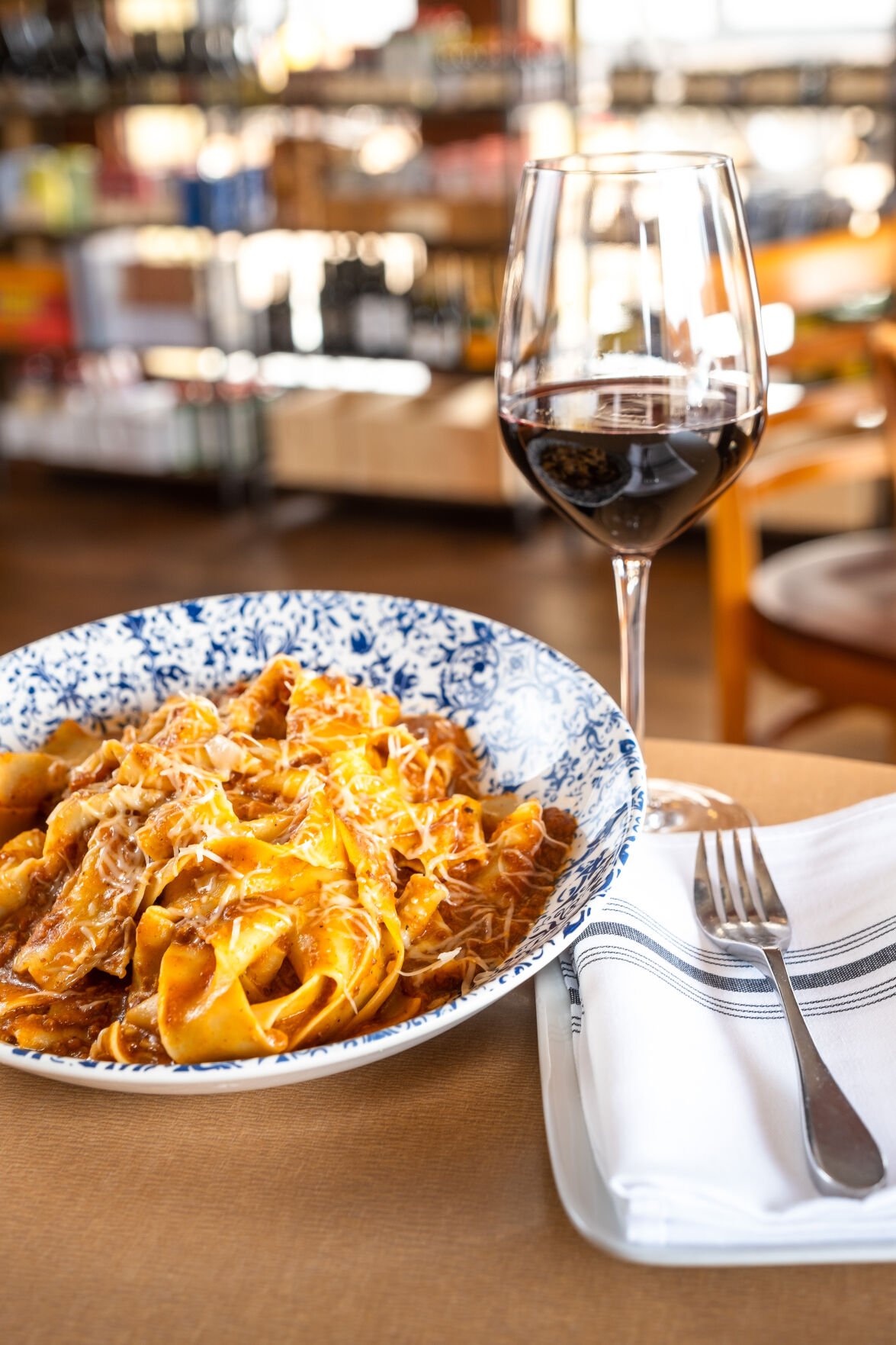 Pappardelle Bolognese  at Pazzeria by Pietro's in Marshall. 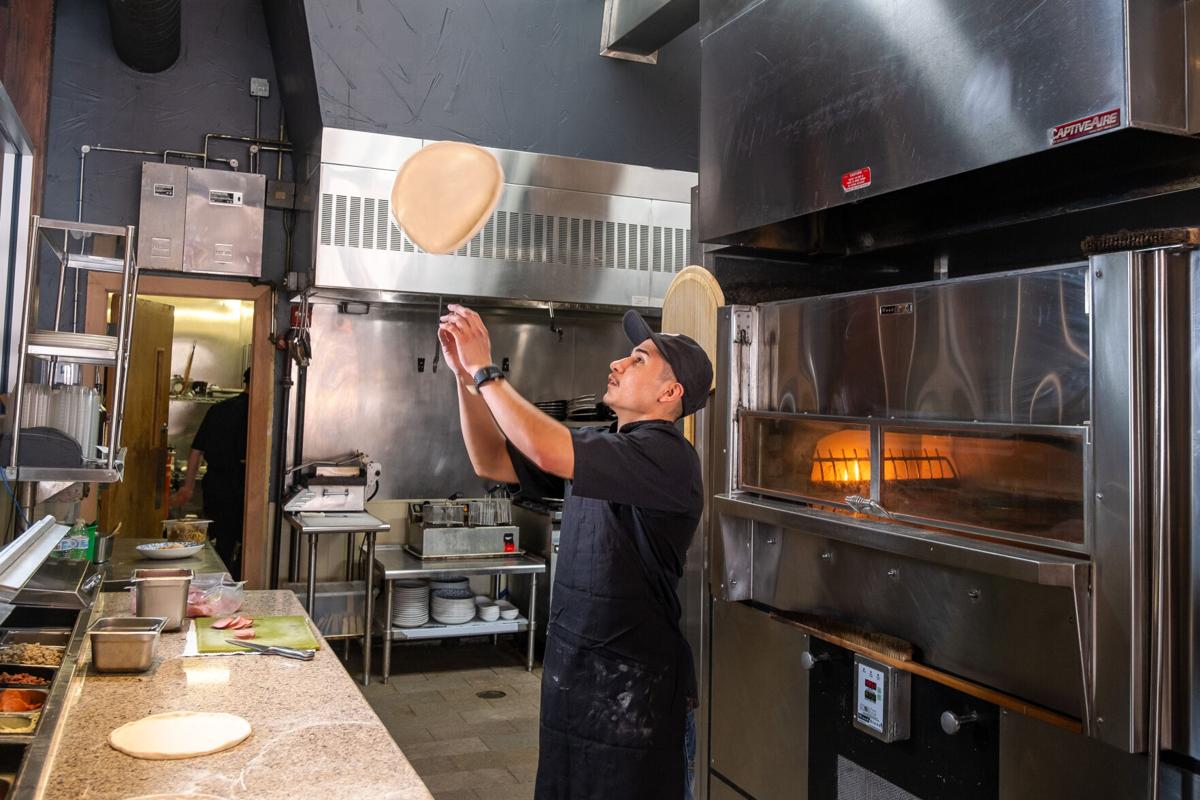 Alexander Jaimes prepares a pizza at Pazzeria by Pietro's in Marshall. 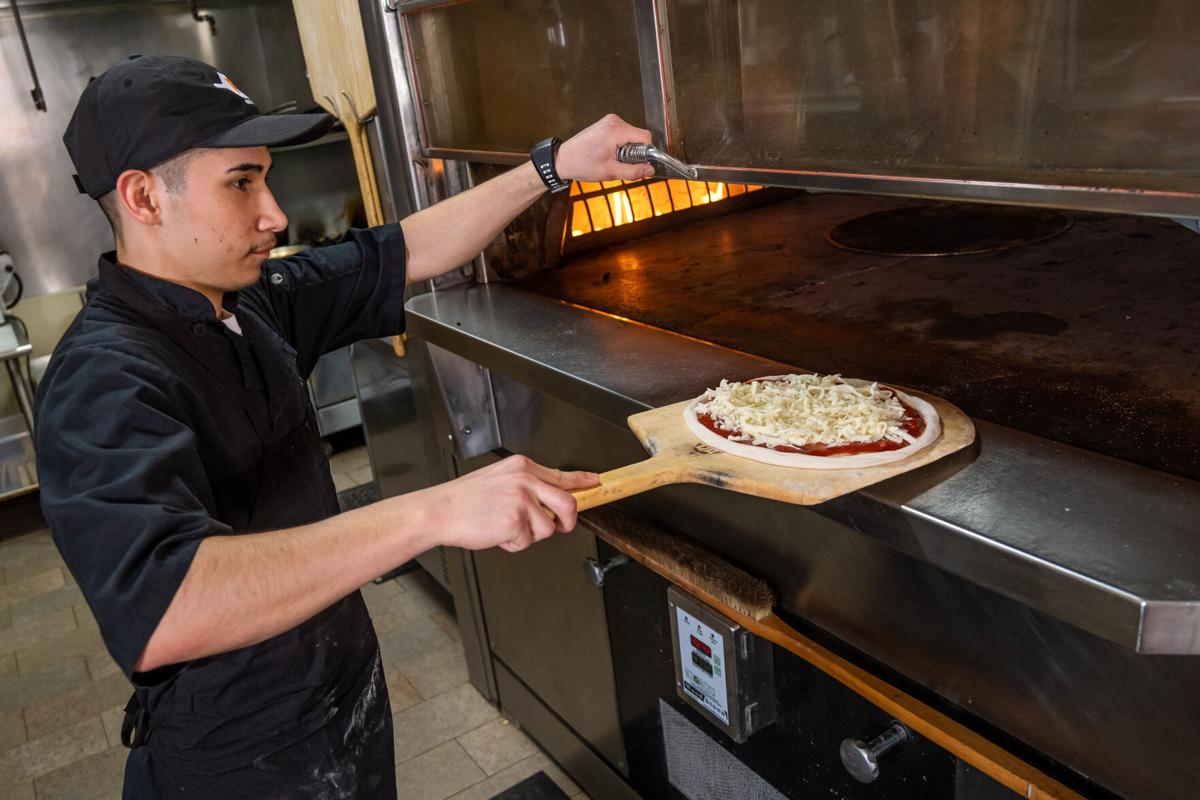 Alexander Jaimes prepares a pizza  at Pazzeria by Pietro's in Marshall.

Prosciutto and arugula pizza at Pazzeria by Pietro's in Marshall.

Pappardelle Bolognese  at Pazzeria by Pietro's in Marshall.

Alexander Jaimes prepares a pizza at Pazzeria by Pietro's in Marshall.

Alexander Jaimes prepares a pizza  at Pazzeria by Pietro's in Marshall.

Giuseppe "Joseph" Filippazzo feels blessed that his family, more than four decades later, is still able to share their Italian heritage and culture by serving up excellent food in a memorable atmosphere at their two East Texas "Pietro's" restaurants.

With a restaurant in Longview and Marshall, Filippazzo and his two family owned and operated restaurants, have managed to adapt to the changing times, new menus and even a global pandemic throughout their 42 years in business.

"There's not a manual and we're constantly learning everyday," Filippazzo said recently. "We've been in business 42 years. My mom and dad, Rosaria and Pietro, started with a location in the Longview Mall in 1979 and we opened our downtown Marshall location six years ago."

The Longview Mall location, named after Filipazzo's father Pietro, served single slice pizza that soon became Pietro's bread and butter. But the couple, who immigrated from southern Italy to the U.S., wanted to share more of their Italian culture with their East Texas customers and the best way they knew to do that was through food and the dining experience.

Pietro's later outgrew its Longview Mall location and moved to its current location at 2418 Gilmer Road, where the family expanded the concept to an New York Pizza Style Neighborhood Market, operated by Filippazzo's brother Stefano.

Soon after, the family began looking to expand to another East Texas location but wanted a restaurant with a view - that's when the historic building at 101 West Austin Street in Marshall came up for grabs.

"Six years ago, we took one more step and elevated our concept to an Italian Trattoria and Pizzaria with a big emphasis on a full serve dining experience and wine program," he said. "My wife was from this area and we saw that there was a need for a consistent yet elevated, family orientated, Italian fine dining experience. We wanted the historic nature of Marshall and the center stone of the community is the historic courthouse."

Many of the recipes featured on the Pietro's Marshall menu come directly from Pietro and Rosaria themselves and Filippazzo said his mother still comes in the restaurants every week to fix her lasagna and the Italian meat sauce featured is his father's recipe.

"I don't feel I'm in the restaurant business though I'm a restauranteur," he said. "It's in your blood. I feel that I'm in the business of sharing my parents' and our Italian culture through food and wine. That's our marketing strategy. We want you to feel like you're our guest, dining with our family on Sunday, and we're closed on Sunday. That's my mom's biggest mantra, to make everyone feel like they're dining with our family on Sunday."

To that end, Filippazzo has made sure to include authentic ingredients, fresh from Southern Italy where his parents were born and raised. From the homemade pasta, to the tomatoes and coffee roasted from Naples, olive oil, Sicilian wine and more, Filippazzo wants to make sure his guests feel like they've just experienced a part of southern Italy.

"We make all our pasta fresh in house," he said. "We offer things here such as charcuterie boards with freshly sliced brischotto. We imported a brischotto slicer from Italy and we're the only restaurant outside of Dallas that has this brischotto slicer. It's a fire-wheel control and it moves the product along the blade and slices it really thin."

The restaurant's wine program, featuring more than 650 wines, is so impressive, it's currently up for Wine Spectator's One Glass Award, the results of which will be announced later this year. Filippazzo himself is currently working on his sommelier certification.

"We have here what we call Pizza de Casa, or house pizzas, which are pizzas we've created specifically for our guests that are out of your norm. We have the Brooklyn Delancy and the Due Santi which are extremely popular. This menu  became very personal, there area  lot of tie ins."

The restaurant even features a small market selling the olive oils, pasta, sauces and more.

Filippazzo said like all restaurants, the past year during the COVID-19 pandemic has been

"Our guests and our staff are of our utmost priority, that's how we've had the tenure that we've had, and that's a big deal," he said. "We've been blessed and fortunate to have made it through the past year as a independent family restaurant."

Filippazzo said during the pandemic, the restaurant survived by never closing and by being adaptable.

"We never closed, never let go of any associate," he said. "We tightened our belt and for some time, didn't take any personal salaries because we didn't take any government assistance. We adapted. We trained hostess and trained them on to go orders and salad stations. We took front of house workers and taught them to cook."

Filippazzo said his restaurants just followed the direction and needs of the customers.

"If you don't learn how to adapt and change in this industry, you'll be left behind," he said. "Competition is extremely fierce and margins are extremely thin. Our guests have also adapted to the changing times. We've learned quite a bit throughout this time and listened to our guests."

Filippazzo and his family are not resting on their laurels. Plans are now in the works to open a high end Tuscan steakhouse on the north east side of the building that faces Washington Avenue.

Called "Tavolo 13," the restaurant is set to open towards the end of spring or beginning of summer and will feature just 13 tables inside.

"We're adding a Tuscan steakhouse concept in this building that's only going to be a Thursday, Friday and Saturday night concept," he said. "Once we open the new concept, that kitchen will serve as the kitchen for Tavolo 13, and we will also use it to begin hosting cooking classes with my mom, limited to about 10 people and we're going to get back to doing wine tastings with me in that space. We will also use that space for hosting private events. We're really excited about this."

Filippazzo said as the restaurant continues forward, it will continue to listen to its guests and change when needed, most recently by adding gluten free pizzas to its menu. The family is also looking to add a coffee and gelato bar to its Longview location soon.

"My dad had some great suggestions when he was here the other day," he said. "We're constantly learning every day. We have a lot of 'R and D' days - research and development. We eat a lot of pizza. We also feel we have the best location and view here in Marshall. From the stems to the music to the view and food, t's all about the guest experience and the atmosphere we create, but we also don't forget about our heritage."