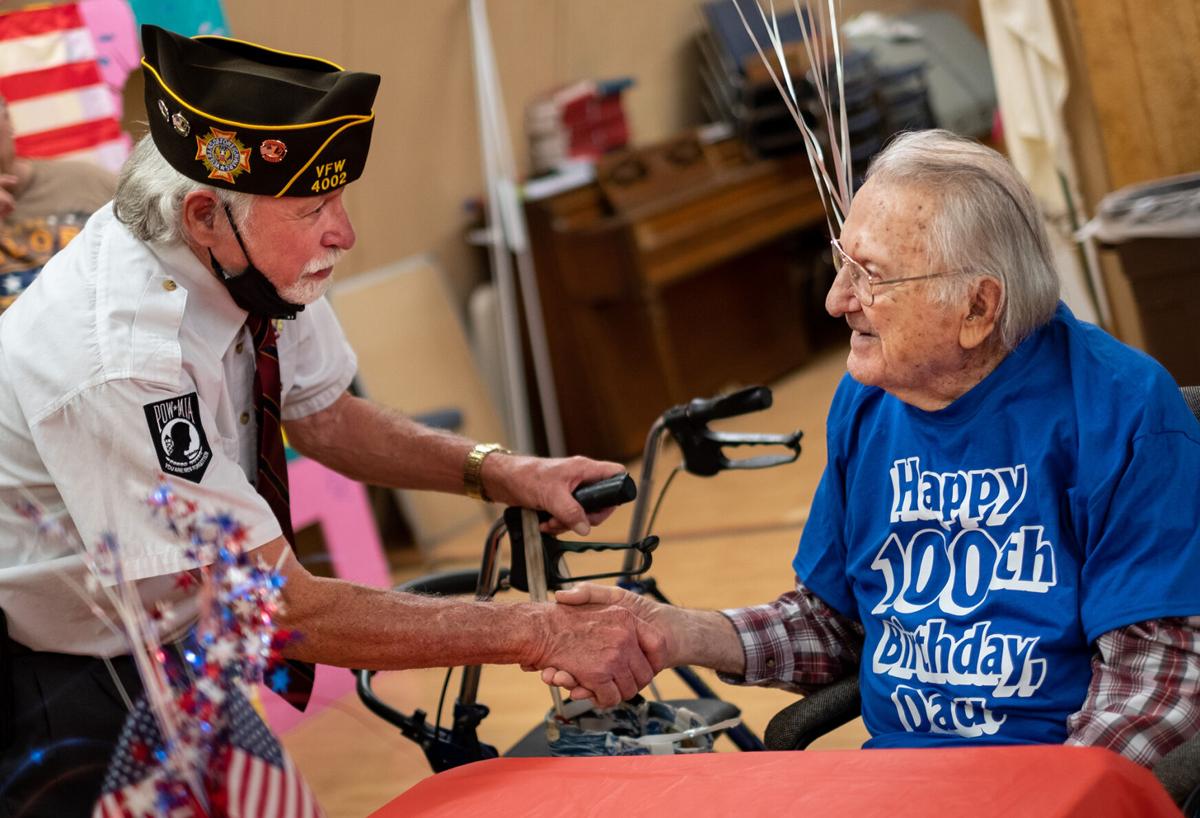 Veteran James Taylor of VFW Post 4002 in Longview visits with Union Grove resident and World War II veteran William Baldree during a party to celebrate Baldree’s 100th birthday at Union Grove Baptist Church in Gladewater. (Michael Cavazos/ News-Journal Photo)“God is everything,” Baldree said, reflecting on his time in the war. 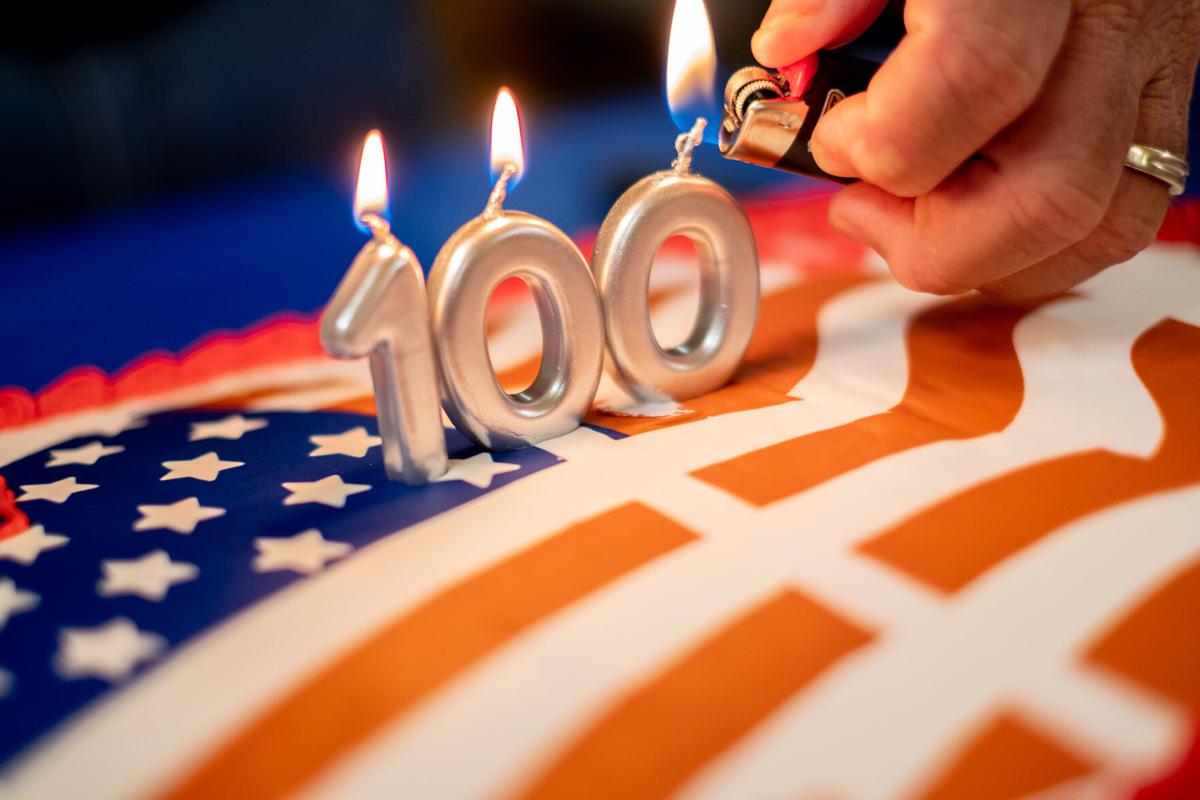 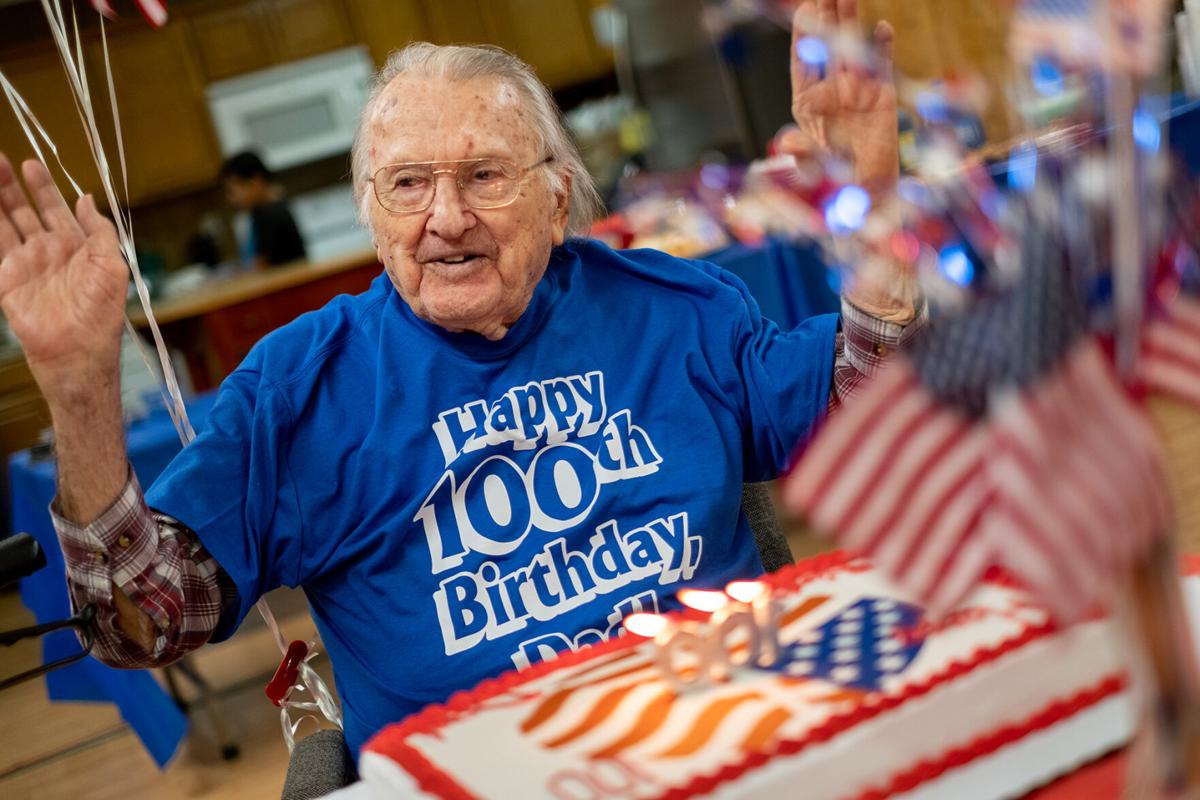 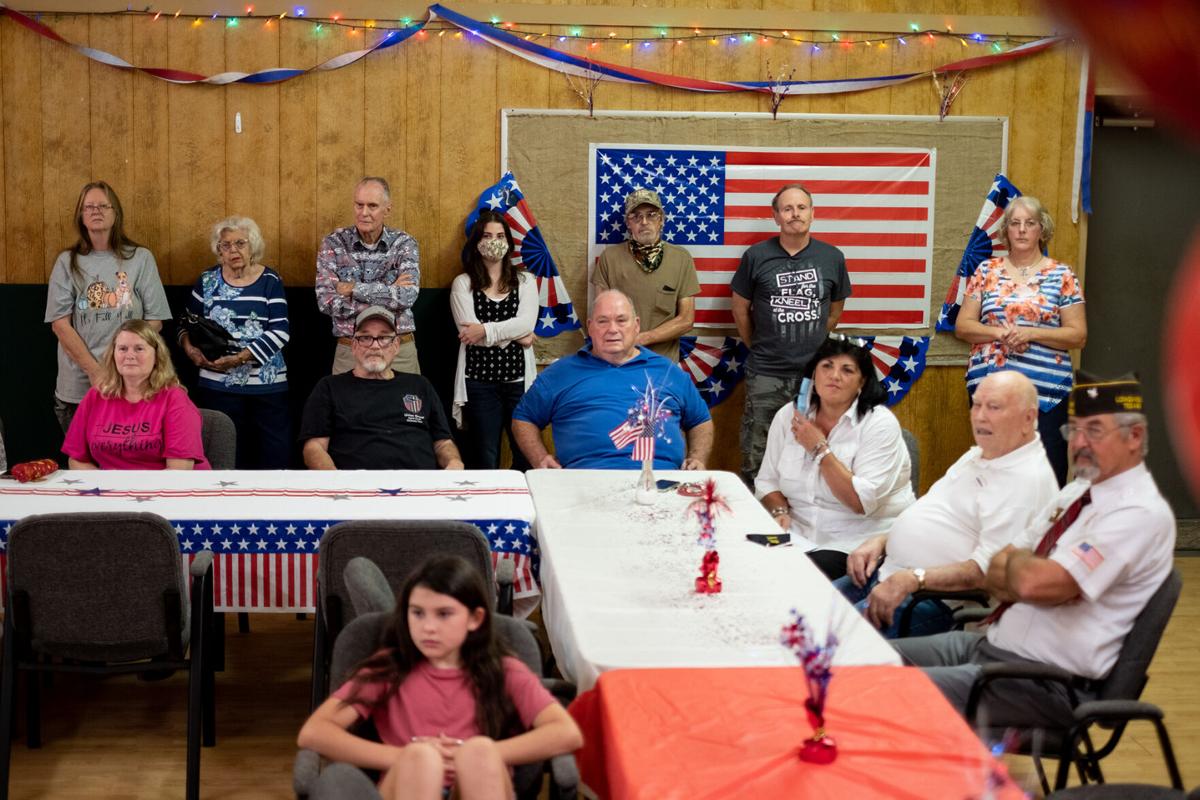 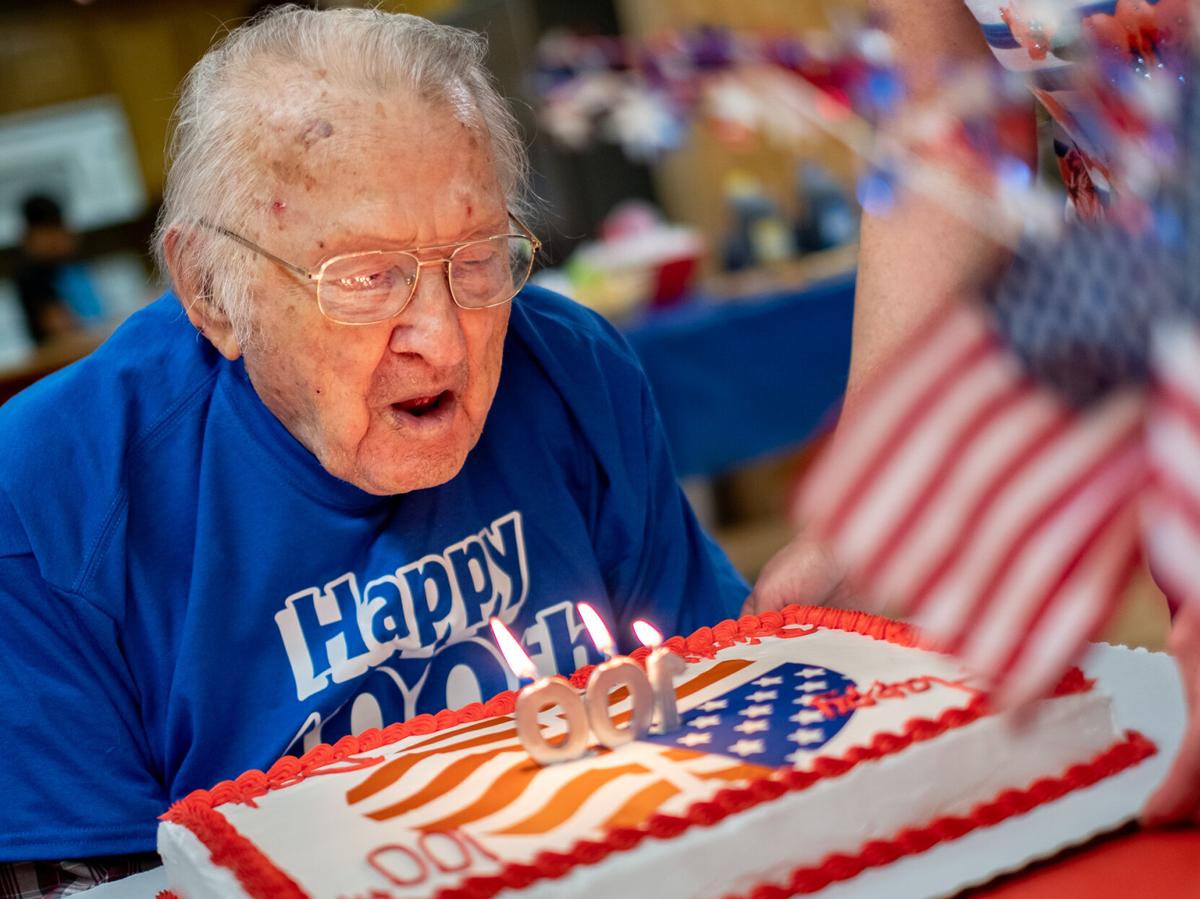 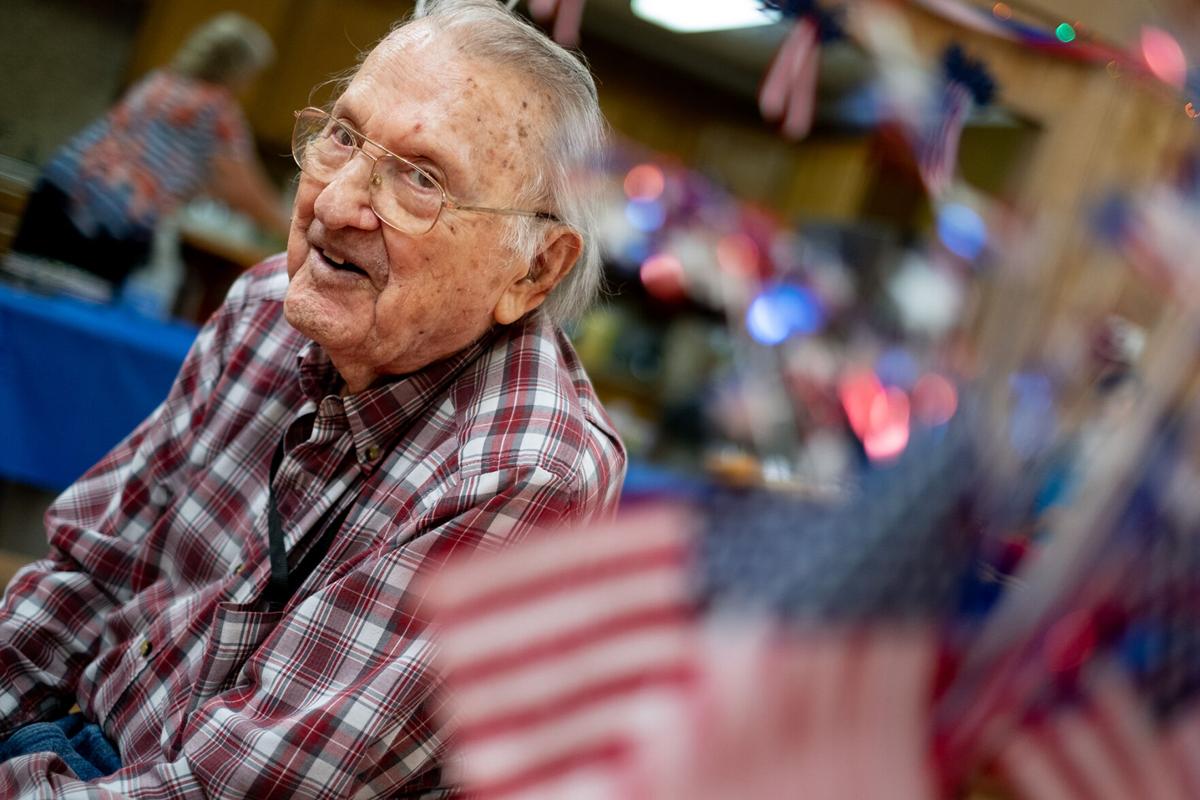 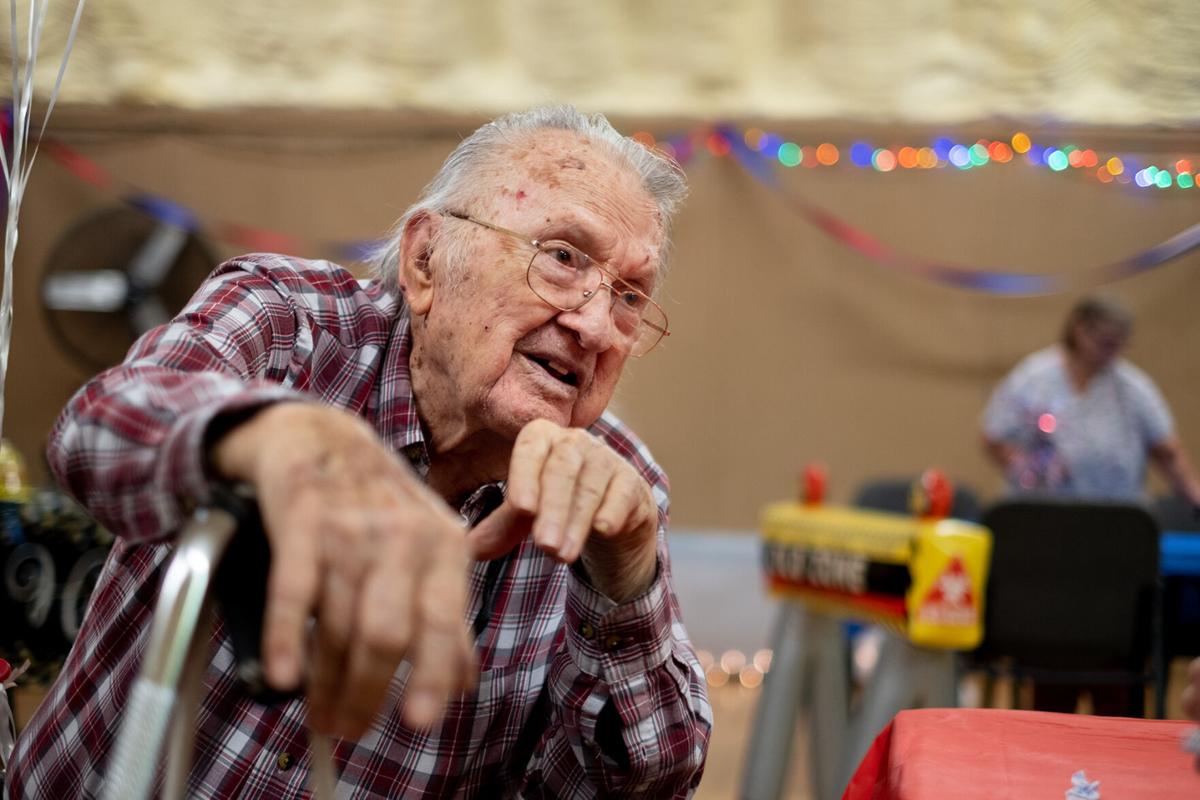 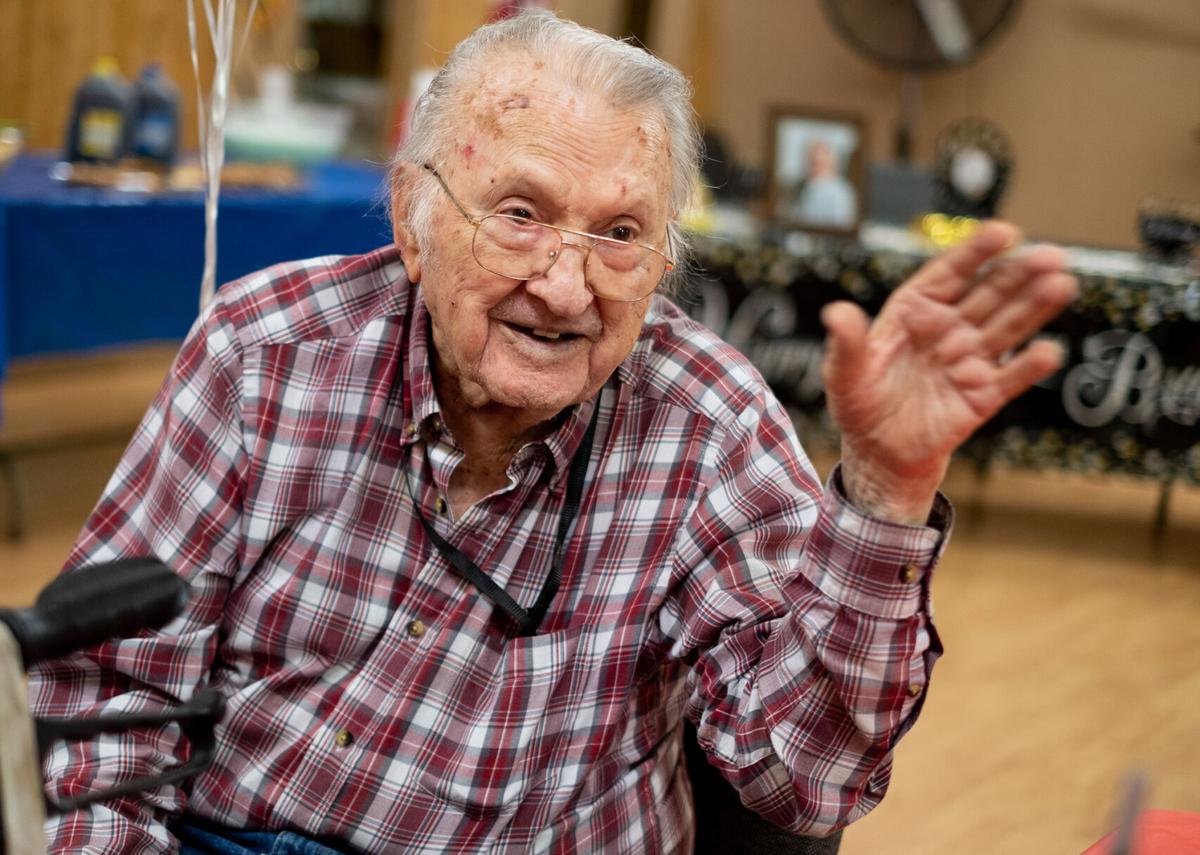 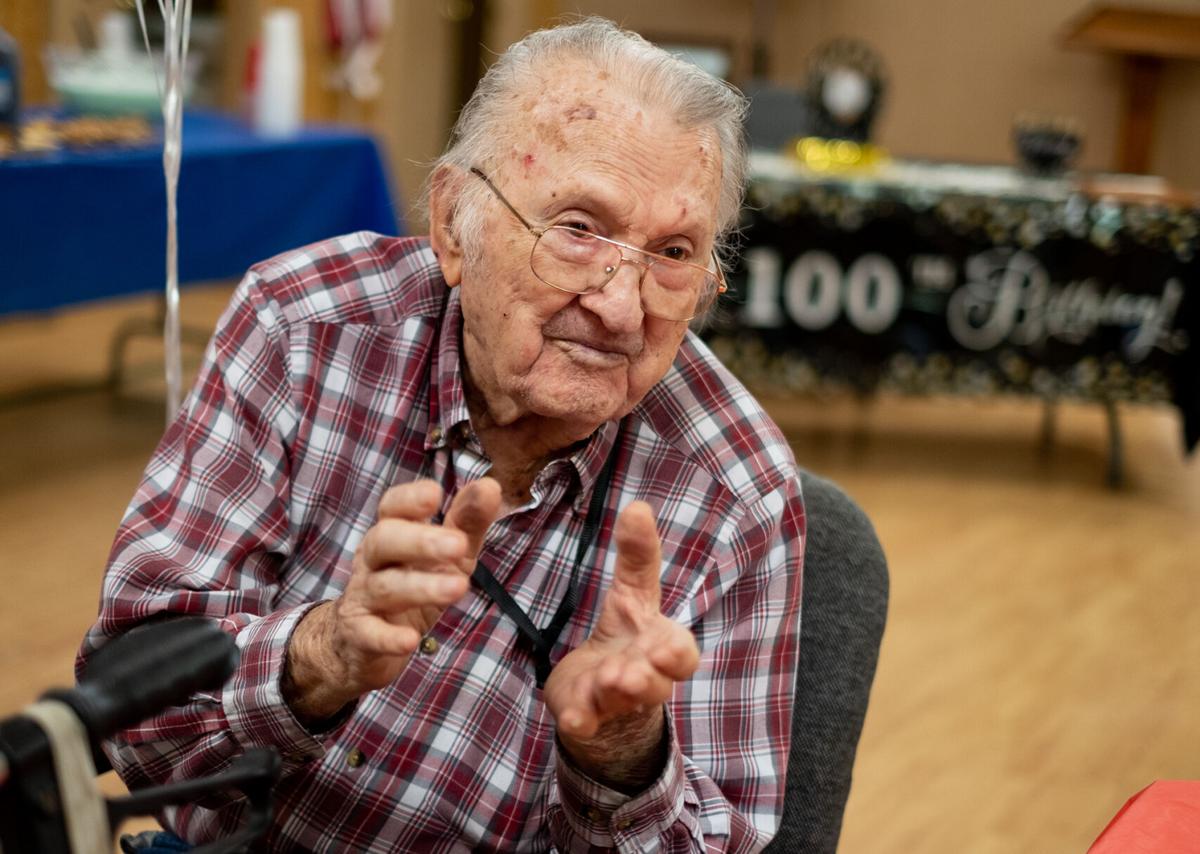 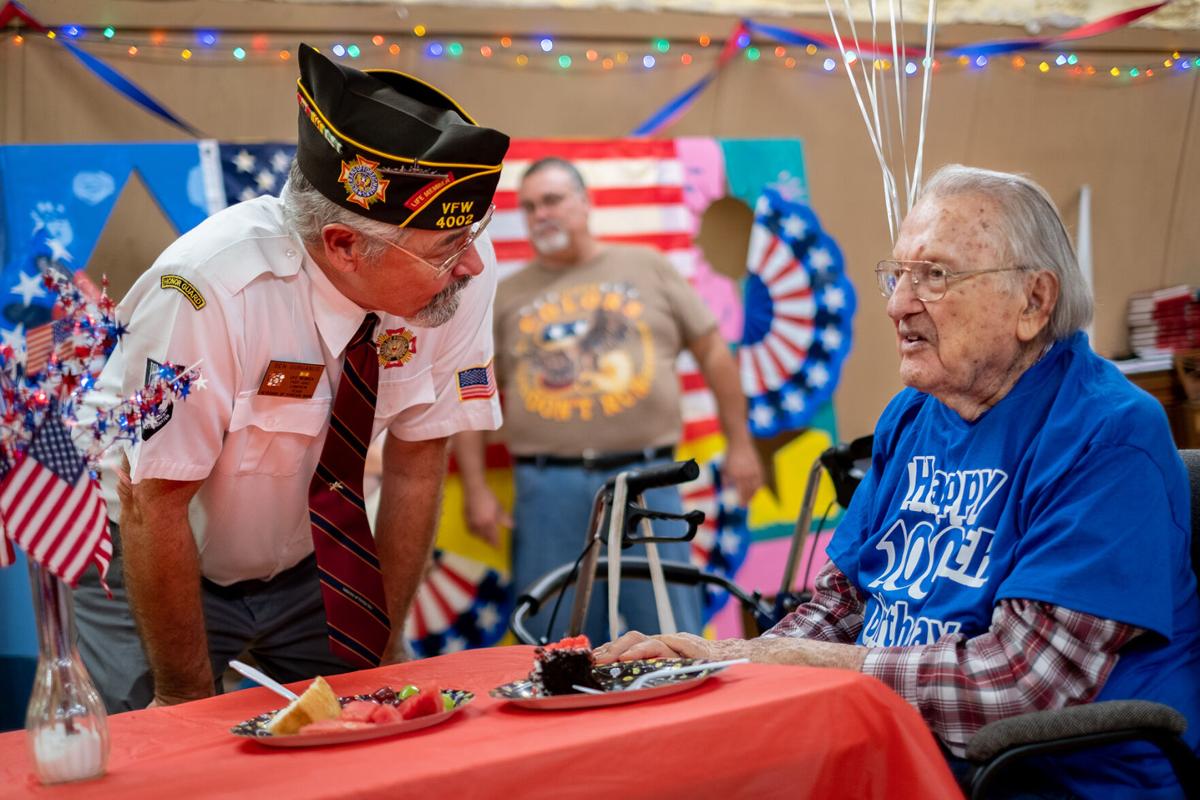 Veteran James Taylor of VFW Post 4002 in Longview visits with Union Grove resident and World War II veteran William Baldree during a party to celebrate Baldree’s 100th birthday at Union Grove Baptist Church in Gladewater. (Michael Cavazos/ News-Journal Photo)“God is everything,” Baldree said, reflecting on his time in the war.

GLADEWATER — William Baldree reflected on his life Thursday — all 100 years of it — as he sat with balloons tied to his chair at Union Grove Baptist Church in Gladewater.

“I got run over by a Model T Ford when I was about 2-and-a-half years old,” Baldree said. “I came to know that God protected me.”

The World War II veteran was surrounded Thursday by family and friends who filled the church hall to help him celebrate his 100th birthday. Law enforcement stopped by to congratulate him, while members of the VFW 4002 Honor Guard based in Longview took pictures with him.

“It’s an honor to get to know him,” said his stepdaughter, Vonnie Zappa. “I didn’t really get to know him until about six years ago when he moved here.”

Baldree moved to East Texas from Ohio, but he previously lived in South Texas.

Zappa’s husband and Baldree’s son-in-law, Brian Zappa, thanked the crowd for coming to celebrate with Baldree on his 100th birthday.

“Dad’s got an amazing story,” he said.

Baldree smiled as he hugged and shook hands with visitors. Vonnie helped him put on a blue birthday shirt, and he blew out the candles on his cake.

He said he remembers his early childhood clearly and recalls the circumstances surrounding being hit by a Model T as a toddler in the early 1920s. His mother left the children in the car while she went into a store, he said.

“I followed her every place she went,” he said, smiling. “She told the kids to stay in the car, and I don’t think she got across the street when I decided that I wanted to see my mom.”

When he was 6 or 7 years old, he went to gather eggs at his grandmother’s house. He could not see into the nest, but when he reached in, he found a rattlesnake attempting to eat an egg.

He had several close calls with venomous snakes as a child, but he said God always protected him.

Baldree was a major in the U.S. Army Air Forces and served as a pilot in WWII, flying B-17s in Europe.

“In my training, you had to be a copilot to learn how to be a pilot,” he said. “I figured the way you become a pilot is to get as many hours as you can, every day.”

Baldree said he volunteered to copilot with other pilots to learn as much as he could.

“I went overseas; we took an aircraft out of Georgia,” he said. “I can’t remember the date.”

Baldree said he was based in Italy for a while and flew his first mission as a copilot.

On the first mission, a German fighter pilot came upon them.

The Boeing B-17 Flying Fortress was a strategic bomber used by the military.

“We had a lot of guns on the back so the Germans didn’t come from the rear,” he said. “The best way to shoot us down was to hit the pilot and the copilot.”

Baldree described tactics he noticed while watching the German fighter pilots on missions. He said they would select a target B-17 and try to kill the operators, rather than only try to damage the bomber.

“On my first mission, the copilot that I trained with was a copilot on another B-17, and the German fighter head on shot them and killed the pilot and copilot,” he said. “I can see it now.”

He flew more than 30 missions and was shot down over Germany on the 33rd mission. Baldree was captured and was a prisoner of war in a German prison camp for 11 months. He said he vividly remembers the details.

“God is everything,” Baldree said, reflecting on his time in the war.

He said he was saved at 94, becoming a Christian, and was baptized surrounded by his family. He said he could see God working all through his life before he was saved.

“His salvation changed mine,” said Brian Zappa, who is pastor at Union Grove Baptist Church.