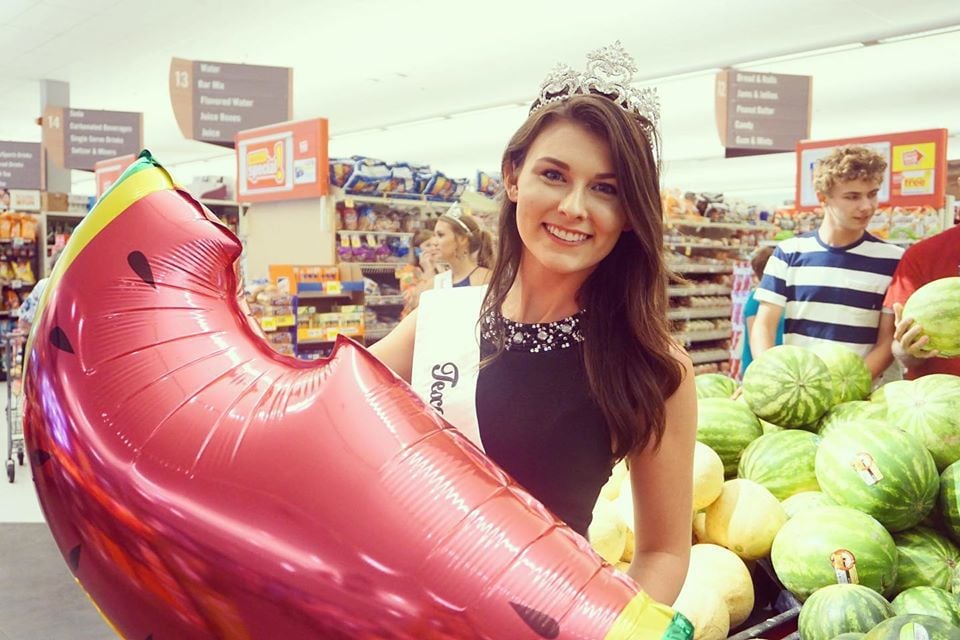 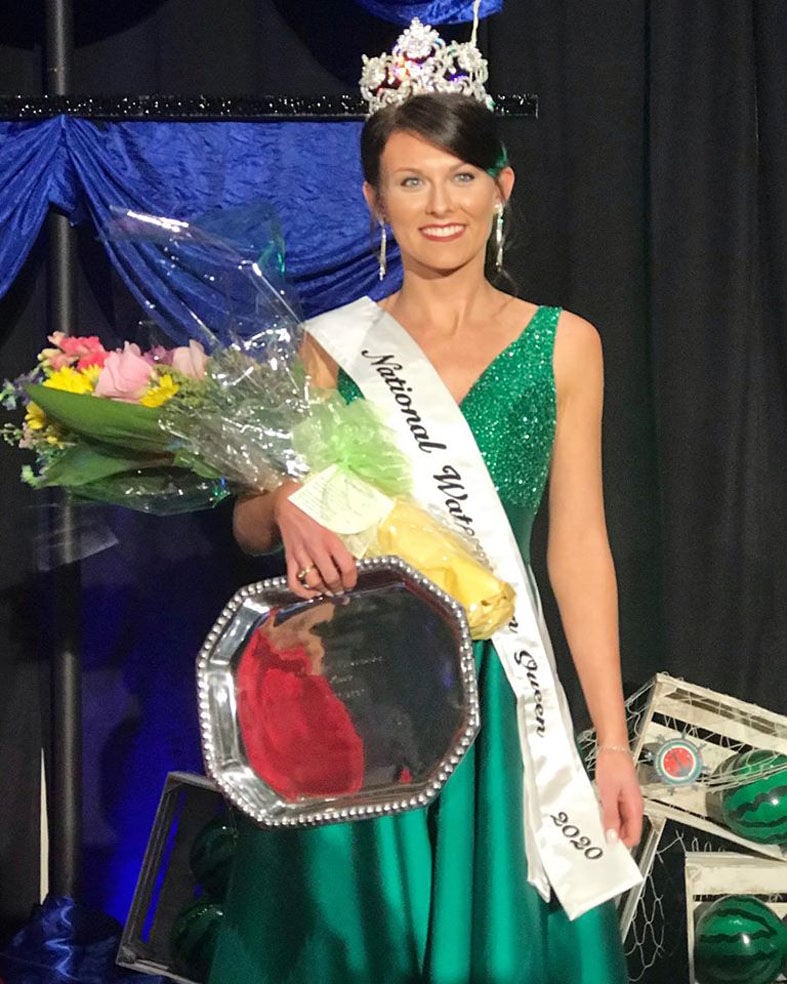 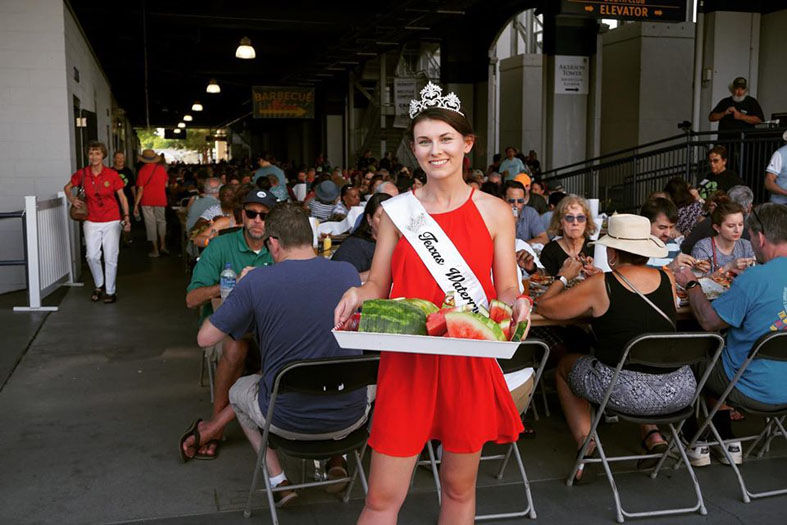 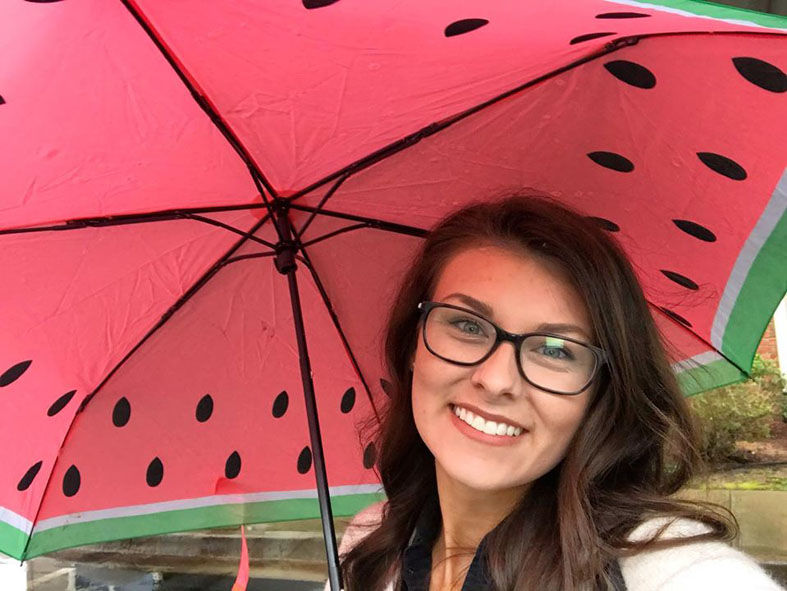 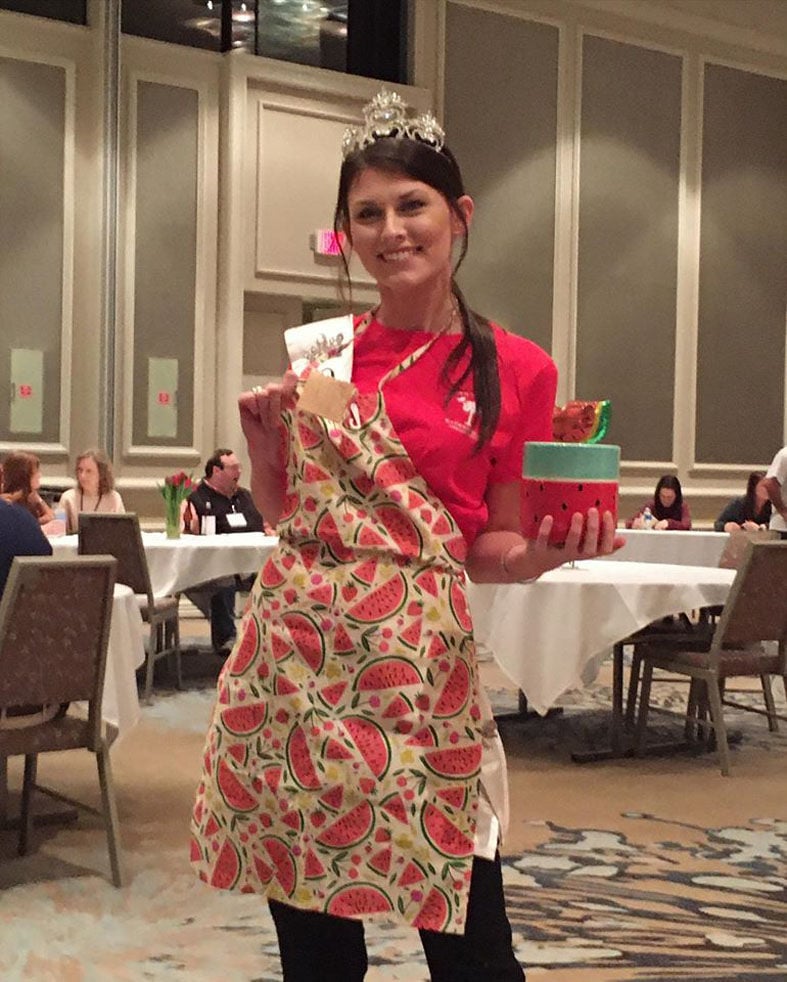 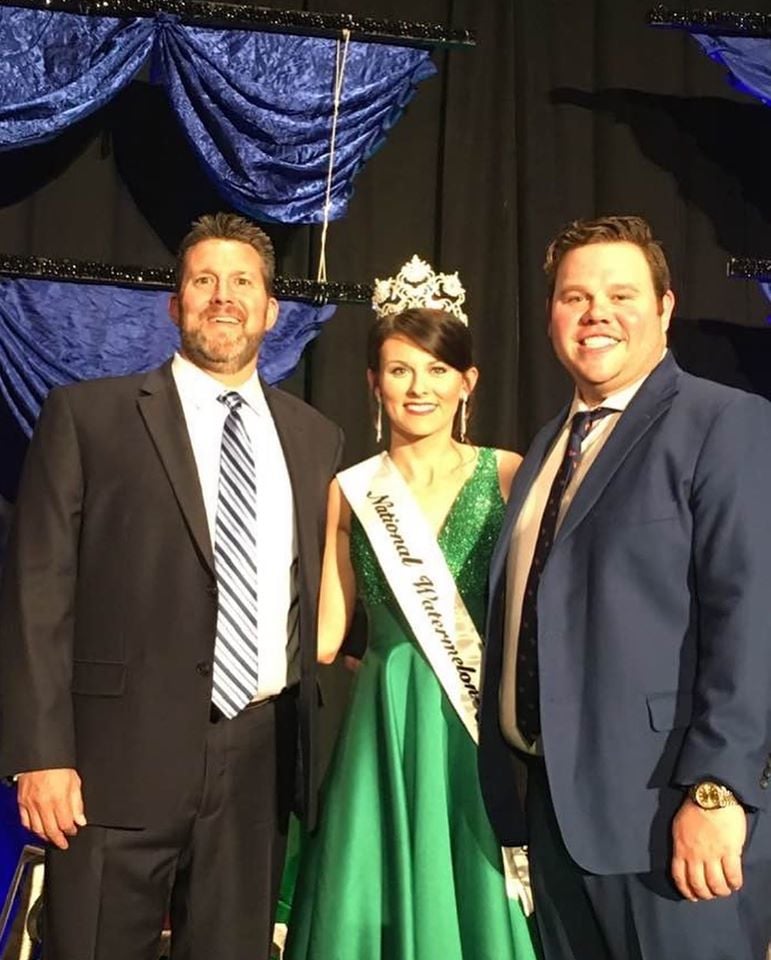 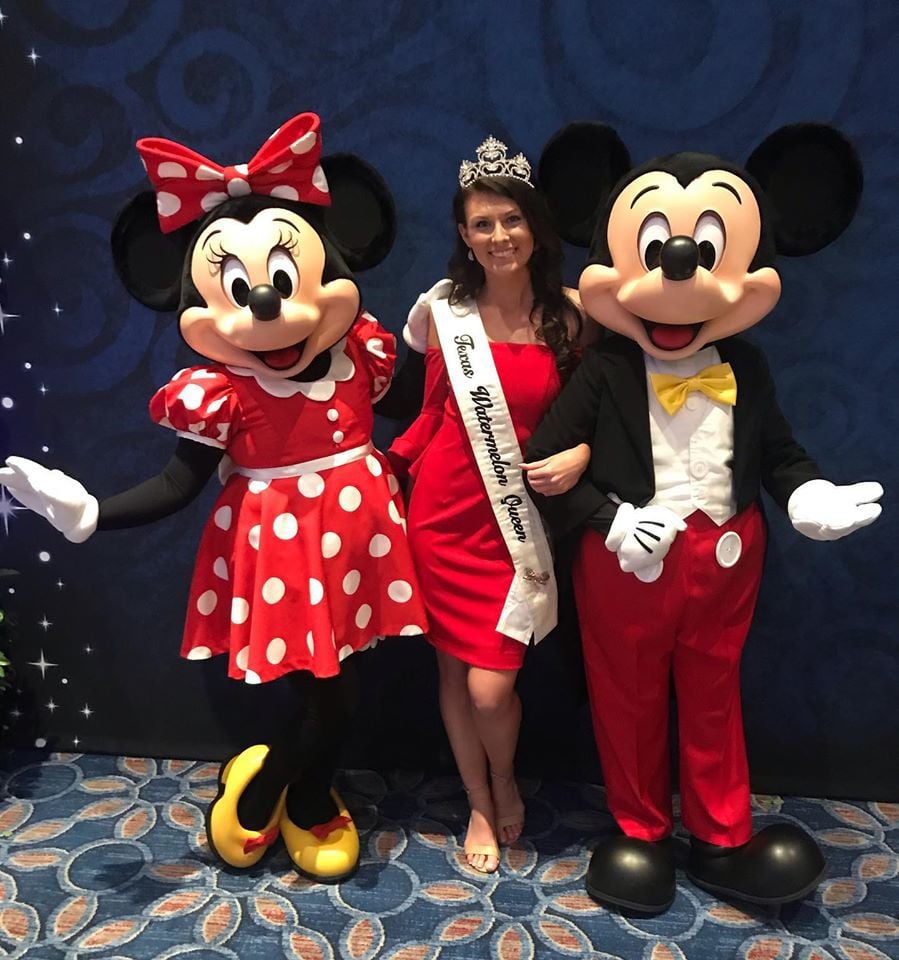 “I am so incredibly honored to have had the opportunity to represent the Texas Watermelon Association at the 2020 National Watermelon Association Convention this year, at the most magical place on earth, Walt Disney World!” Huntington wrote on the association’s Facebook page, as she waited at the airport for her return flight home. “It’s just like they say — dreams REALLY DO COME TRUE THERE!”

Describing the crowning as a humbling experience, the 22-year-old said she’s looking forward to what she deems “the journey of a lifetime.”

“I can’t wait to see where this journey takes me while I promote the most wonderful fruit in the world — Watermelon!” she wrote.

Huntington was crowned Feb. 22 at the National Watermelon Association’s annual convention, held in Lake Buena Vista, Florida. According to the association, she will now represent the organization at promotional events throughout the year as its ambassador, encouraging the consumption and sales of watermelon.

“She spends the year traveling to cities all over the nation, and often into Canada, talking to people in supermarkets, at fairs and festivals, telling everyone about the nutritional benefits, and economical values of watermelon,” the Association stated.

“Marion County is very proud and excited for Paige,” LaFleur told the News Messenger. “She is living proof that a small town girl can make it to the big show.”

It’s an honor to have a national winner from Marion County.

“Paige and her family have lived in Marion County for years and are some of the best folks,” the county judge said. “Brooke [his wife] and I are extremely proud of her.”

Huntington, who is currently pursuing a master’s in public health at UT-Tyler Health Science Center and holds a bachelor’s in psychology from Texas A&M-University in Texarkana, is the past Texas Watermelon Queen.

Mostly growing up around the cattle side of agriculture, she became fascinated with the watermelon industry after observing the journey of her friend, Hannah Crisp, of Elysian Fields, who served as the 2018 state queen.

“I saw all of her travels throughout her years. I was thinking I don’t know how she got into this, but this is the coolest thing ever,” Huntington recalled.

Thus, when she saw a post for a new ambassador to be crowned, Huntington went for it, competing for the opportunity at the annual state convention, hosted in McAllen.

“I was really excited because I was like I’m going to get to learn something new,” Huntington recalled.

“I went down to McAllen and competed and I won,” she said, sharing the competition is a pageant format, but is based 70 percent off public relations, a speech, interview, an impromptu question and an evening gown and event wear competition to showcase what to sport at promotions.

“I had no idea what I was getting myself into, but it was the most amazing, humbling experience I ever had in my life,” Huntington recounted.

She kicked off her state reign in Atlanta, Georgia, for training with fellow watermelon queens, from other states, across the country.

“We all went and learned everything about watermelon and the health value and versatility of our product,” she said. “We go out and teach our consumers those things; and then my journey just started from there. We got to travel everywhere.”

Travels took them to places as close as the 5K Watermelon Festival in Center to as far as Toronto, Canada.

“We hosted a lot of grocery store promotions and watermelon eating contests up there,” she said of Canada.

She also had fun in Maryland for the Mar-Del Watermelon Association’s queen tours.

The highlight of the tour was teaming up with the Rotary Club for a crabs and watermelon summertime feast at the Navy-Marine Corps Memorial Stadium in Annapolis.

“It was awesome. We helped pass out the watermelon and crab. It was a really cool opportunity,” she said of the event, which promotes the nutritional value of locally grown foods, like watermelon.

Since joining the program, Huntington has become an expert in the watermelon industry, learning everything from how to pick them to their nutritional worth.

“It’s 92 percent water, so it makes it an excellent hydrator,” she said of watermelon. “We oftentimes will be at the end of marathons or 5Ks and we’ll be there at the end to pass out watermelon. It’s really cool.”

Watermelon is also a multivitamin, containing Vitamins A, B6 and C.

When it comes to picking a good watermelon, she goes by three steps: look lift and turn.

“First you want to look at the watermelon, make sure it’s free of any dents, cuts or bruises,” she advised. “Then you want to lift it; you want to pick it up and you want it to be dense for its size because it’s 92 percent water.”

Next, “you want to flip it over, turn it and look for a creamy yellow spot on the bottom, so you’ll know it’s ripe,” the queen said.

Huntington said what she’s looking forward to now the most in her national reign is creating and listening to thousands of more watermelon stories.

“One thing that’s my platform is get to know other people’s ‘watermelon stories,’” she said. “I got to meet some of the most amazing people in my travels… in the airport, just getting to talk to them and tell them what I did.”

Through her encounters, Huntington has learned that watermelon is the key fruit that connects people, inciting fond childhood memories, filled with good times and joy.

It’s also interesting to see the powerful impact it’s made.

“Getting to hear how our industry impacts people on a personal level is one of the most rewarding experiences with this job, and seeing the smiles on people’s faces,” said Huntington.

The new national queen’s first stop will be the Illiana Watermelon Convention in Illinois. Next, will be the grand St. Patrick’s Day parade in Savannah, Georgia.

“Those are my first two steps, but I have more,” said Huntington. “So it’s exciting to see where it takes me.”

“I can’t wait to meet everybody in our industry this year and grow my knowledge and family,” she added.

It’s been a rewarding venture for the Jefferson native. It’s an industry she’s honored to be a part of.

“’I didn’t know anything about watermelon when I started this journey, but one thing that I learned really quickly about the watermelon industry is that they’re one big family,” said Huntington.

“I was accepted with the biggest simile, open heart and most opened arms into the Texas Watermelon Association,” she continued. “When we stepped into the national competition last week, it was nothing less. It’s just one big happy family.”

“There are recipes, watermelon facts, and you get to see the queens and keep up with them,” Huntington said.