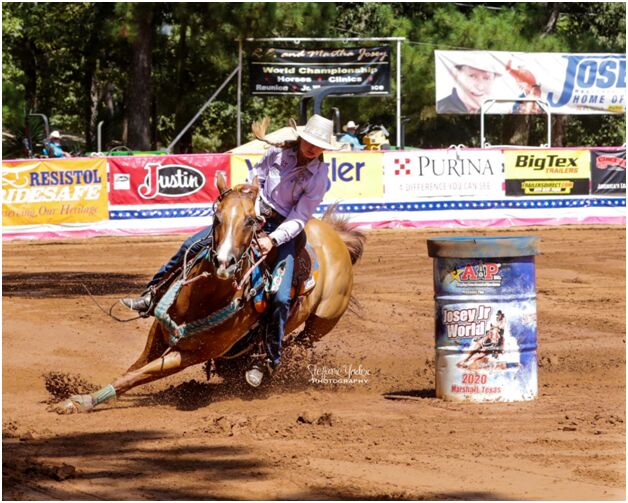 Champion Mallory McGee rides her horse, Let Her Stop, during her championship run where she got a time of 16.782 seconds. 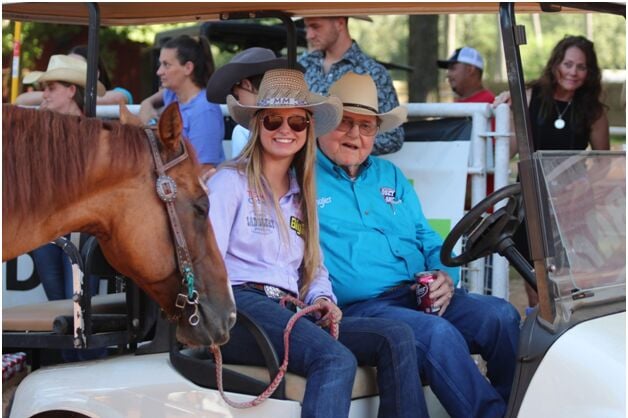 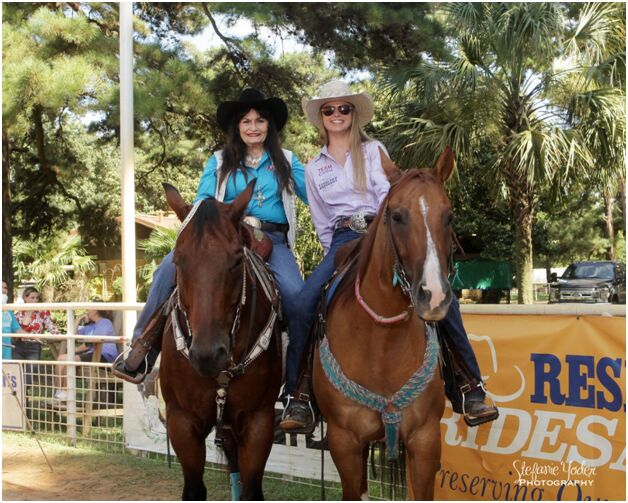 Martha Josey poses next to Mallory McGee after she in named champion of last weekends competition. 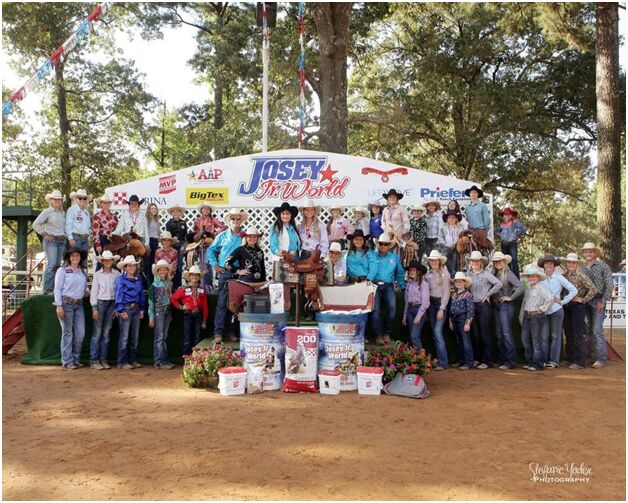 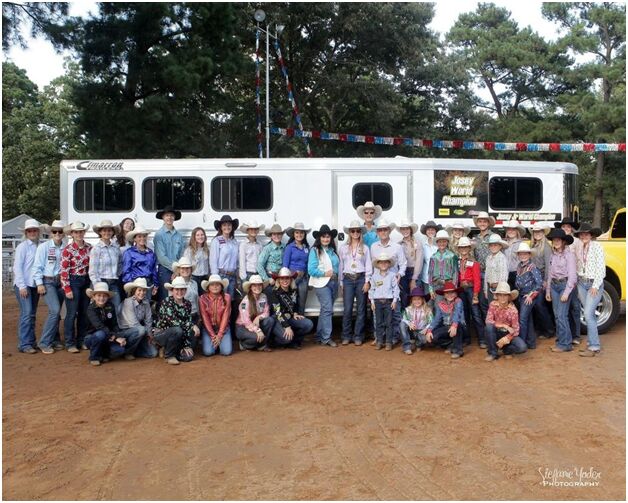 Top 40 contestants pose in front of one of the main prizes, a new trailer, during the Josey Jr World Championship competition.

Champion Mallory McGee rides her horse, Let Her Stop, during her championship run where she got a time of 16.782 seconds.

Martha Josey poses next to Mallory McGee after she in named champion of last weekends competition.

Top 40 contestants pose in front of one of the main prizes, a new trailer, during the Josey Jr World Championship competition.

More than 300 contestants traveling from 19 states came to Marshall recently to run in the oldest worldwide youth barrel race, held for the 40th year at Josey Ranch in Marshall.

“Before we started our race, we had $9,000 added money from two sponsors AIP Energy and Ward’s Resturants. During the 1st Go, local Marshall businesses came together to put another $11,000 into the pot. This contribution brought the total added money for the barrel race to $20,000,” owner of the ranch Martha Josey said. “We are so excited about this and what this support will do for the future of our event and what it can bring to the city of Marshall.”

Announcer Randy Adams, “the voice of the Josey Ranch,” added that “it is the prize money in any sporting event that gives it the recognition, regardless of how good the competition is. I am really thankful this great event is finally getting the recognition it so justly deserves.”

The JWCJBR is a 4D format with four divisions, much like flights in a golf tournament. Friday and Saturday were qualifying rounds giving each contestant two chances to make it to the championship round on Sunday.

This years event also added a new element, the Josey Team Challenge, where finalists were randomly divided into six teams representing the national sponsors of all Josey events.

Representing 16 states in the short go, contestants ran from the slowest qualifying time to the fastest during the championship Sunday, and each contestant had an opportunity to take the lead.

McGee, riding her horse Let Her Stop, qualified in the second go with a 16.782. There were 35 competitors that ran faster times in the two days of qualifying.

Ashley Schenck, Marketing and Sales Director at Josey Ranch, said that being placed so low in the qualifying rounds only made McGee’s win more amazing, especially when you consider that her horse, Let Her Stop, had colic surgery just a year ago.

“This team had come a long way and qualifying for the finals in a world class competition was a tremendous accomplishment,” she said.

During the championship McGee and Let Her Stop stopped the clock with a 16.122, the fastest time of the weekend, giving her the lead with the 35 challengers who beat her original time still waiting to go.

Champion of the previously held Josey Reunion Round Up, Kayla Bacon from Idabel, Okla. was one of the competitors still yet to go along with two previous JWCJBR World Champions.

Bacon was also the only person to run a sub 16 time in the two weekends of competition when she captured the Reunion title with a 15.773 two weeks ago.

“There were many great runs but all fell just short of the 16.122 mark and the title went to Mallory McGee,” Schenek said.

In the sponsor team challenge, with an average time of 19.323, AIP Energy walked away with the Match Race Title. The 23 members of this winning team will all receive the Carrol embroidered jacket.

Following McGee and winning a saddle and Shea Michelle trophy buckle were the second division (or 2D) champion, Annalee Smith from Rebecca, Ga. riding Berrenda Rose, with a time of 16.645.

The 3D title, saddle and buckle belonged to Kaylee Winslow from Alva, Okla. riding Shot Of Firewater with a time of 17.177 and the 4D saddle, buckle and title was claimed by Tyee Simmons from Caney, Kan. riding Azure Skippin Town with a time of 18.189.

Before the beginning of the final events Sunday, church collection was taken by ranch staff to be donated to St. Jude, and several awards were presented.

Awards included three scholarships. Laura Flowers of Vicksburg, Miss., was the recipient of The Rebecca Adams Scholarship, the Sandy Smith Scholarship went to Morgan Elder of Caddo Mills, and the Joyce Barney Scholarship was awarded to Kassidy McKee of Lenapah, Okla.

Recipient of the annual “Mom Arthur” award, an award in honor of Martha Josey’s mother, was presented to Chastity Peacock, nominated by her daughter and contestant Austyn Peacock from Bryan.

The final award was the “CB Reed Horse with the Most Heart” honoring Martha’s great horse CB Reed who won 52 consecutive barrel races and seven horse trailers. Winner this year was LM Right On The Cash sponsored by Dr. Greg Ford, owned and ridden by Kaysie Burgess of Shreveport, La.

“We want to thank added money sponsors AIP Energy, Ward’s Restaurants, the city of Marshall and all our many local and national prize sponsors for their generous support,” Josey said.