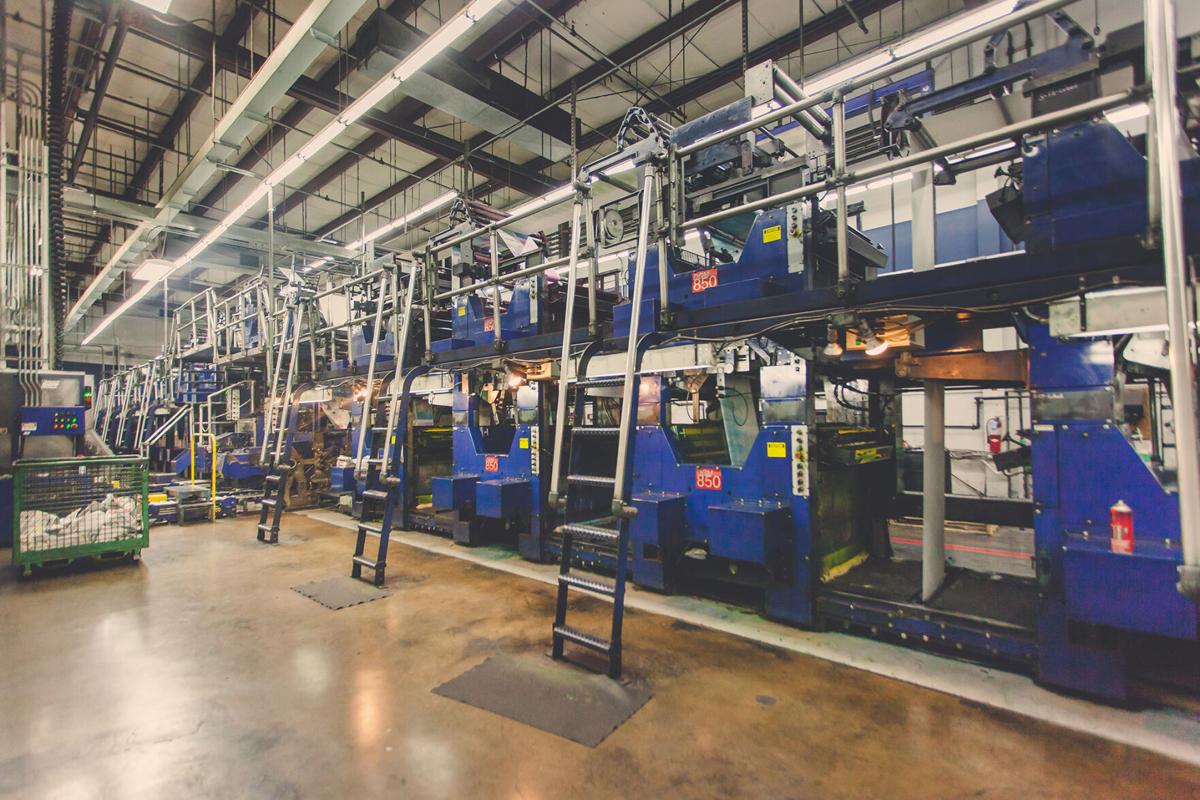 A printing press sits inside the Longview News-Journal where the Messenger is printed. 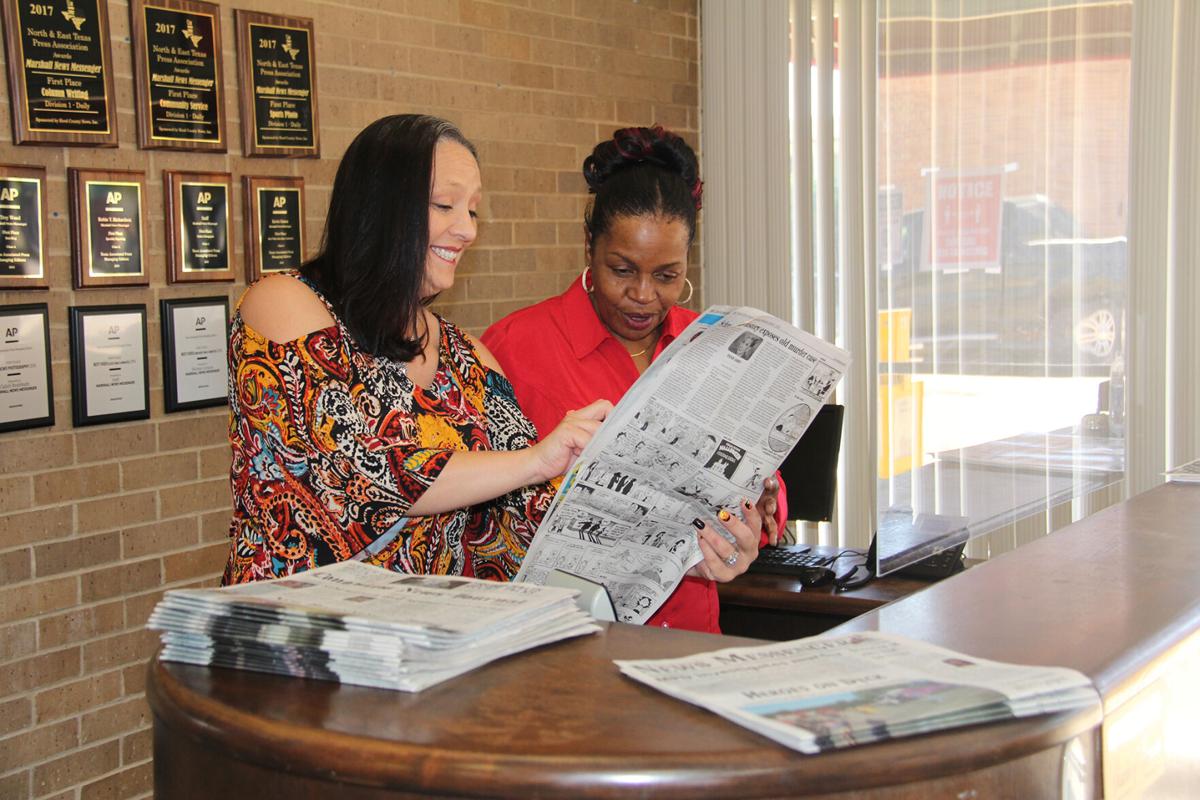 Advertising specialists Dianne Gray and Brenna Stevens look over ads in the newspaper. 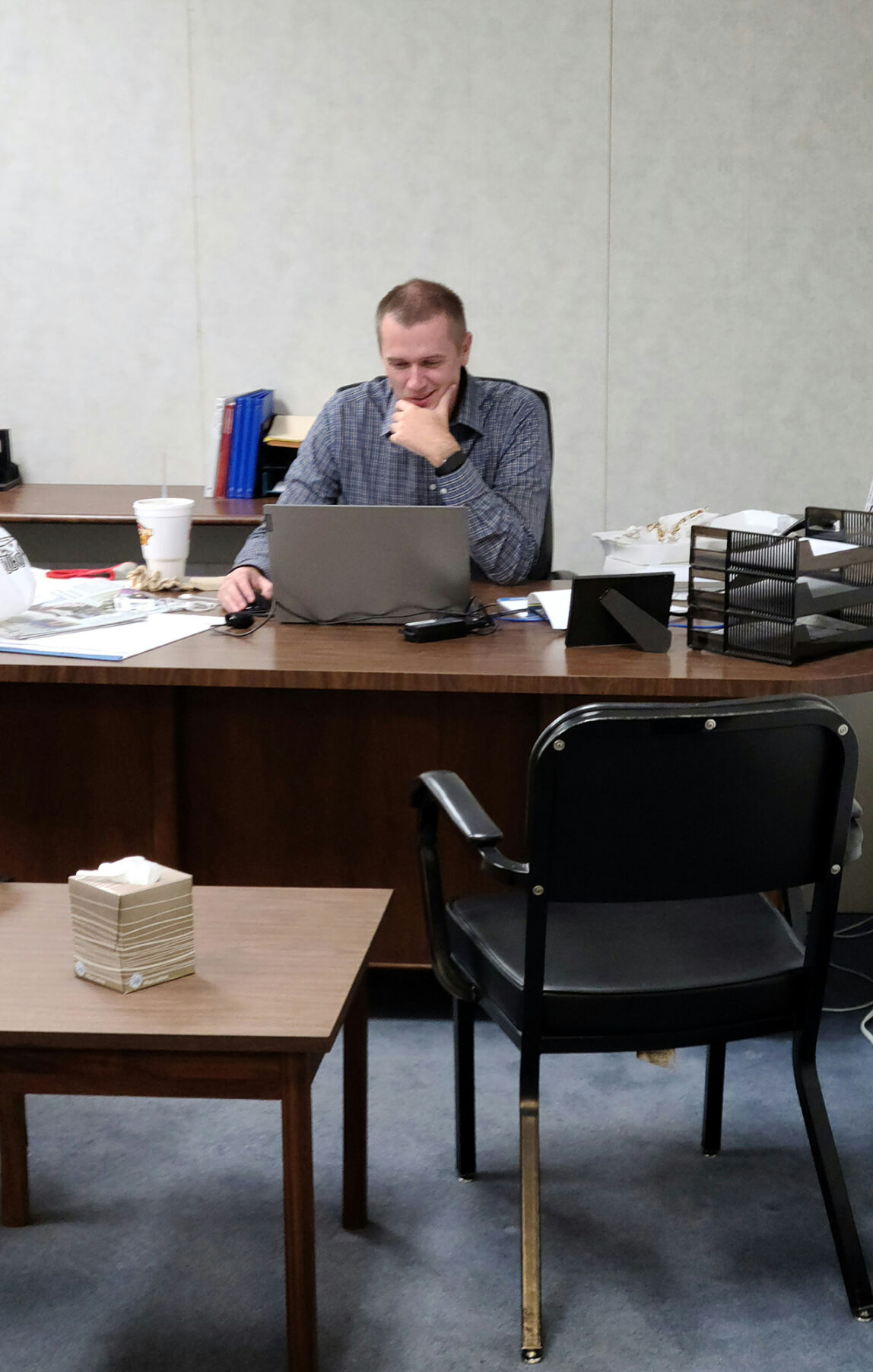 Publisher Alexander Gould does work inside his office. 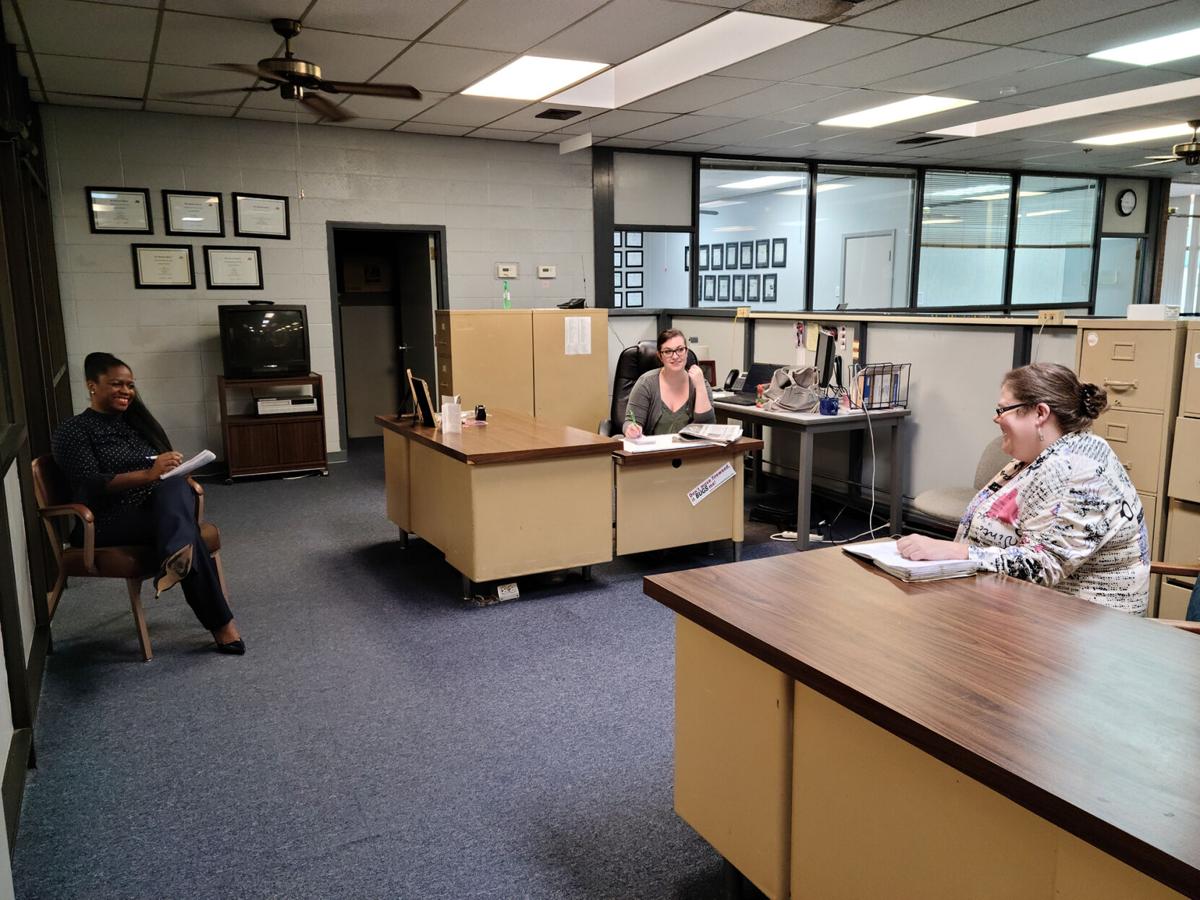 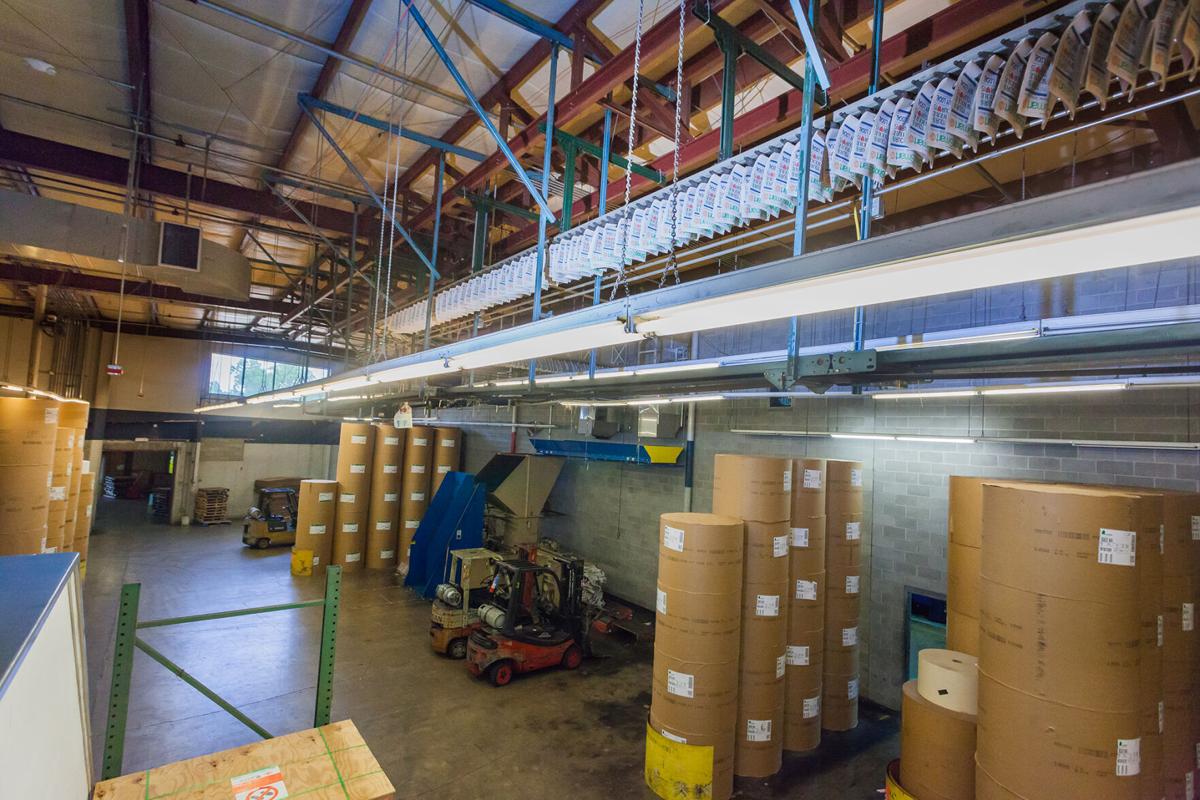 Newspapers dry after being printed.

A printing press sits inside the Longview News-Journal where the Messenger is printed.

Advertising specialists Dianne Gray and Brenna Stevens look over ads in the newspaper.

Publisher Alexander Gould does work inside his office.

Newspapers dry after being printed.

We all have a story to tell.

This story is about how a daily newspaper works and the people involved in the process. In honor of National Newspaper Week, held every year in October, the Marshall News Messenger wishes to thank their subscribers, their employees, their advertisers and educate citizens a little bit about the world of newspapers.

Every story in the newspaper starts with a tip. This lead may be from our journalists attending one of many meetings we cover or from a citizen or business owner giving us information. We also monitor social media and police scanners to hunt down information.

For the Messenger, we have three full-time journalists and two full-time editors. Each one of our journalists has a specified ‘beat’ that they are responsible for and are required to submit at least two stories daily. For example, Robin Y. Richardson, who has been at the newspaper for 18 years, primarily covers county government in both Marion and Harrison counties and is also assigned court coverage, a big job since Marshall has the largest federal patent courts in the United States. She also covers the city of Waskom. She has been in the journalism industry for 21 years.

Our education reporter, Bridget Ortigo, who has been with the newspaper almost 10 years, has a huge ‘beat’ as she covers TSTC, ETBU, Wiley College, Panola College — Marshall campus along with myriad area school districts including Marshall, Elysian Fields and Hallsville. She also covers the city of Jefferson.

City reporter Jessica Harker, who has been with the newspaper a little over a year now, deals with everything related to the city of Marshall including city commissioners meetings, MEDCO, Greater Marshall Chamber of Commerce, Marshall PD and FD, new businesses and more.

Nathan Hague, who has been with the Messenger since 2014, acts as sports editor for the publication and as sports reporter. He gets to attend all kinds of sporting events, including fall football, and makes sure that social media is updated with scores. He does not just cover the Marshall Mavericks but other local school districts as well.

Wyndi Veigel, who has been at the Messenger for more than a year now, serves as editor and has been in the industry for 15 years. She also is the newspaper’s religion reporter and covers other assignments as needed. Veigel is the last line of defense for mistakes in the paper (If the crossword is incorrect it’s her fault.), determines which stories are appropriate (along with the publisher) and organizes the content each day. She proofreads stories and pages after the page designer finishes the pages and then sends them to the press.

All of the journalists at the newspaper are award-winning through Texas Press Association, North and East Texas Press and Texas Associated Press Managing Editors. They are professionals that chose this career path and graduated from college with the appropriate degrees to become journalists.

Now that everyone knows who we are, let’s get back to our story, shall we?

For our example, we will take a recent story about the Amazon patent case against Plano-based Vocalife. Court reporter Robin Richardson has to be in the ‘know’ from her sources about what important federal trials are coming down the pipe and finds out when the trial is slated to begin.

Before she ever walks into the courtroom, she has done background research, studied the case, which contains pages upon pages of documents. She then covers the trial while taking copious amounts of notes since recording devices are not allowed.

Typically, Richardson will also do background on the companies at trials and cover open and closing statements, getting comments from attorneys if possible. A normal trial lasts anywhere from six to seven days and contains multiple witnesses and exhibits. After a verdict is reached, the journalist then reaches back out to attorneys to see how they felt about the verdict. Approximately 30 hours was spent by our journalist on this story, and it isn’t unusual on in-depth reporting pieces for our reporters to all dedicate that kind of time on stories.

After a story is complete, the text and any photos typically taken by the reporter are passed on to the editor.

At this point, the editor has decided where the story will be placed. In the case of the Amazon story, it was assigned to a space across the top of the front page due to the brand recognition and amount of the fine ($5 million.)

As the editor reads the story, they are looking for numerous things: misspellings, grammar, sentence structure, incorrect word usage and Associated Press style. She ultimately finalizes when and if the story prints and assigns it for page designers through the company’s content management system called BLOX. The editor also serves as the social media person and assigns when the story hits on the website, Facebook and Twitter.

The Messenger, along with the rest of the newspapers in the M. Roberts Media group, utilizes a design desk set up at the Longview News-Journal office. While the editors decide where items go, page designers execute the process of designing well thought out and beautiful, eye-catching pages. A page designer laid out this very page (Her name is Mary Rainwater and she does awesome work!) Typically, each paper has the same rotation of page designers unless someone is ill, on vacation or simply needs additional help.

As the pages are designed, the editor communicates with the page designer, reviews the pages for any last minute adjustments and then sends them to prepress where plates are made for the printing press.

What is the primary function of a newspaper? Many would say to inform and honestly, they aren’t wrong. But first and foremost, a newspaper is a business.

To help our ad staff, we also employ an ad assistant, Megan Harrell, who helps with all kinds of tasks from serving as backup office help, to special projects and assisting Stevens with ad related tasks.

One last, but very important, piece to the newspaper puzzle, is our publisher, Alexander Gould, who has been here for a couple weeks now. A publisher’s role is multi-faceted. They help oversee the editor and act as a manager of sorts to make sure the newspaper as a whole is doing well.

“Newspapers are the reflection of the full spectrum of a community. Highlighting its strengths, celebrating its wins and raising awareness of its weaknesses. While it is more comfortable to only read the information that aligns with our beliefs, it is vital that newspapers continue to bring the entire community’s information to all, so that a true dialogue can occur,” Gould said.

Not only does Gould oversee the Messenger but also the Panola Watchman and the Kilgore News Herald, as regional publisher.

Once the pages are finalized and sent to prepress by the editor each night (the drop dead deadline for the Messenger is 10 p.m.), those in prepress make sure the pages are just right (such as checking that we haven’t put color images on a black and white page), and begin making printing press plates. The News Messenger prints in Longview.

After the papers finish printing and drying, they are delivered over to the Messenger office near downtown where delivery drivers pick them up and then deliver them to the customers.

We would like to take this time to thank our delivery drivers who work really early morning hours and our customers who continue to support the newspaper.