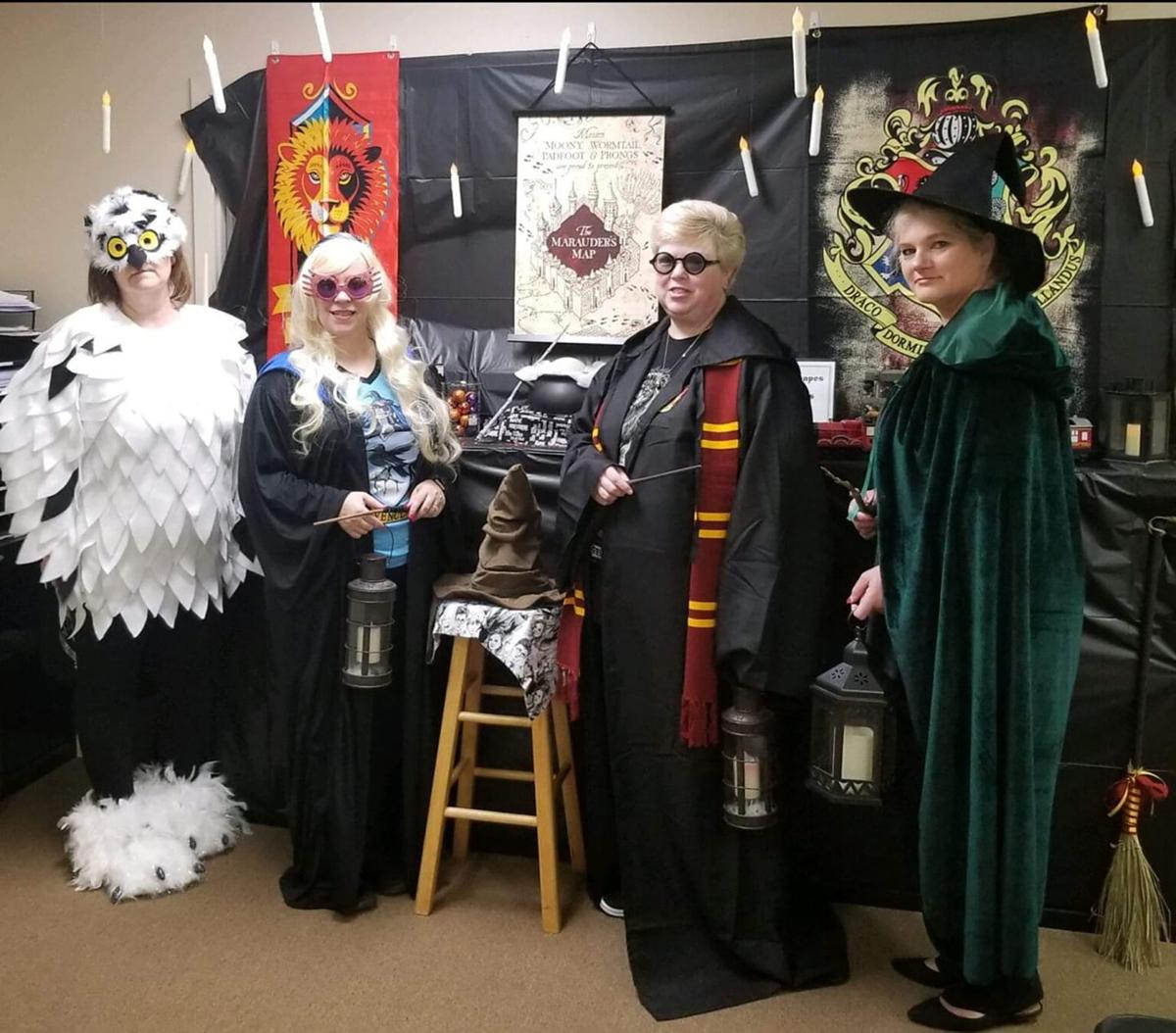 One Halloween Michele and co-workers at Louis A. Williams Associates dress up as Harry Potter characters; left to right: Lori Suber is Hedwig the owl, Julie Brock is Luna Lovegood, Michele is a Gryffindor student and Anita Rana is Professor McGonagall. In the middle, on the stool, is the Sorting Hat and floating in the air above are candles. 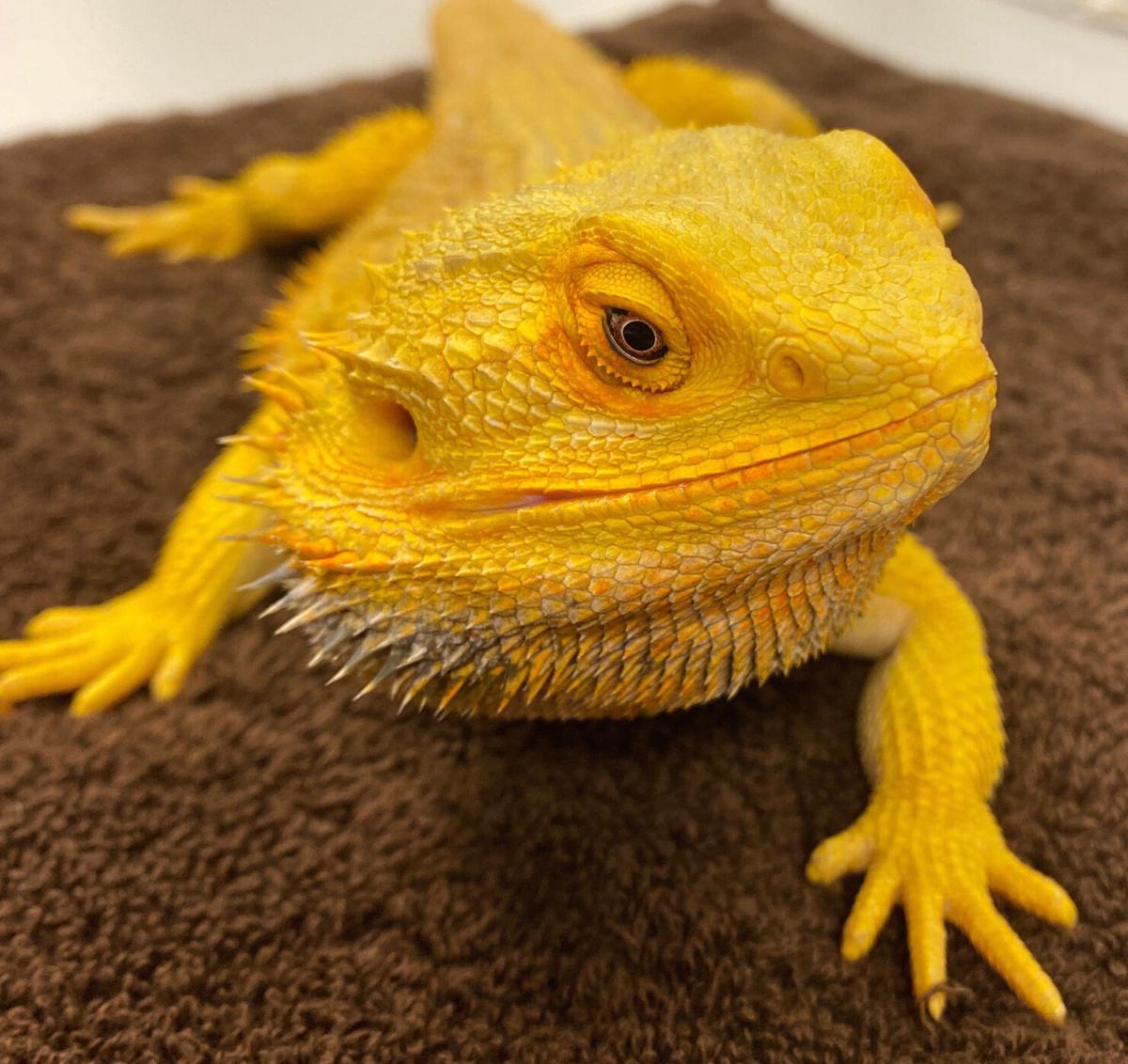 A 17-inch bearded dragon named Norbert is the Hallsville Bobcat who lodges at the Fuller home on weekends and summer vacations. His “day” job is class pet for Kayla Fuller’s 8th grade science class at Hallsville Junior High.

One Halloween Michele and co-workers at Louis A. Williams Associates dress up as Harry Potter characters; left to right: Lori Suber is Hedwig the owl, Julie Brock is Luna Lovegood, Michele is a Gryffindor student and Anita Rana is Professor McGonagall. In the middle, on the stool, is the Sorting Hat and floating in the air above are candles.

A 17-inch bearded dragon named Norbert is the Hallsville Bobcat who lodges at the Fuller home on weekends and summer vacations. His “day” job is class pet for Kayla Fuller’s 8th grade science class at Hallsville Junior High.

The Noon Optimist Club of Marshall met online Wednesday, Sept. 30 with President Le Ila Dixon reminding everyone that we meet next week in-person at Jose Tequila’s Restaurant. It will be our first in-person meeting since mid-March. We hope to see everyone there. New officers for the Optimist International year which began Oct. 1 will be installed.

Optimist John Fortune will be on hand with the lenses needed for an indoor or outdoor photo. He has already scouted the location and hopes to take the group outside in the shade of Jose Tequila’s north wall. Optimist Michele Fuller has secured a new Optimist International banner (we haven’t used one for the past decade) and Optimist Richard Magrill has it mounted on a new portable stand. We hope to feature it in our midst as John photographs the group.

Today, Le Ila reminds us that the weather is perfect for National Hot Mulled Cider Day. “Personally, I keep cider in my refrigerator this time of the year just for making mulled cider; I love the fragrance in my house as well as sitting on my back porch sipping a cup.”

In the past, Sept. 30, has been a signal date. In 1846, a dentist, Dr. William Morton, used anesthetic ether for the first time to extract a tooth. In 1939, college football was first televised. The game, played in New York, was between Fordham and Waynesburg College in southwest Pennsylvania.

Today we wish “Happy Birthday” to Optimist Michele Fuller who shares this date with William Mills Wrigley Jr., founder and CEO of the Wrigley Chewing Gum Company. “I remember chewing Big Red and Doublemint in my childhood,” Le Ila recalls.

On the subject of “Good News” Le Ila shares the story of a teenage bagger at a grocery store. Izayah Edwards is a senior at Merrillville High School and works part-time at Jewel-Osco in Crown Point, IN. His act of kindness is photographed by another customer whose social media post goes viral.

“I took this picture while in line at Jewel-Osco a half an hour ago,” Suzanne Dee posts on Facebook. “I had been thinking crabby thoughts about humanity just before I spotted this young man, who was bagging groceries, pull out his wallet to pay the remainder of a customer’s bill when she said she didn’t have enough. See? There are still heroes.”

Edwards, who has worked at Jewel-Osco for about a month, says he first noticed the customer was taking a long time to count her money and he happens to have $50 in his wallet, so he just gives her $20. “What inspired me,” he says, “is that I felt really bad with everything going on with the pandemic and all the negative things in the world. This was a little moment in the day where I could show that someone out there really does care.”

We welcomed Josh Moore, our newest member, to our Zoom meeting today. He is excited to be back at work at AutoBody Express, but took his phone to an office not in use so that he could join us.

We were able to pepper him with questions about archery and hunting which in his case is truly a family affair. Asked if he has a garden on his 25 acres, he replies, “No, I raise kids!” (Just what an Optimist ought to be busy with!) “I look forward,” Le Ila says, “to getting to know him and hearing more of his hunting lore.”

The club is urged to get Marshall Education Foundation T-shirts. Optimists Charles and Le Ila Dixon have ordered theirs. The T-shirt project funds grants to teachers for classroom use and/or supplemental materials and supplies. Our sponsorinh logo is on the back. Get yours at https://co323designs.square.site/product/MEF/19?cs=true

Our hardworking secretary-treasurer, Michele Fuller, is getting some relief. Melissa Al-Ahmadi has agreed to take over as secretary! Michele became treasurer in October of 2015 and secretary-treasurer in 2017. She faithfully manages the club’s membership records and finances, including the challenge of tracking meal payments and dues casually placed in her hands at each meeting.

Michele is a club mainstay, a sparkling presence at meetings, and a behind-the-scenes worker on a myriad of fronts. She runs interference on club purchases and reliably dispatches club contributions. She is also a source of new projects that benefit kids; it was she who shared with Optimist Julie Brock the idea of a birthday party for foster kids. Her church, Longview Missionary Baptist, held one in the spring of last year and she and Julie sparked the one our club celebrated last fall.

FireAnt Festival bags, or checks for the Young Texans, she is busy with the details and keeps the club functioning smoothly.

Getting her story, Richard Magrill notes, is not easy because she prefers to work in the wings to see that everything gets done. She has worked for Louis A. Williams Associates (LAW) since June of 2000. For the past ten or so years, she has been one of LAWs Angels in the American Cancer Society’s Relay for Life.

She loves kids and enjoys Halloween at LAW — an important company event. She and her co-workers coordinate their costumes each year when the kids of LAW families come around to the various offices for Trick or Treat. She shares a photo of the time when they dressed up like Harry Potter characters. In past years, they have dressed up like a s’more, clowns, Ninja Turtles, Disney Princesses and gypsies.

Michele was born in Pasadena. “I’m not interesting,” she protests; “I just come to work and go home.” “When I’ve finished my evening meal, I play with my dog Monster and I also have a bearded dragon named Norbert.” “For excitement I clean my house!” “I keep a low profile on Facebook, Monster is the star of my page.”

Norbert is a Hallsville Bobcat in his “day” job. Michele’s daughter, Kayla, is an 8th grade science teacher at Hallsville Junior High and Norbert is actually the class pet! He is seventeen inches long and a striking golden color; he lodges at the Fuller home on weekends and during school vacations.

With Michele’s modest assessment, her Optimist friends beg to differ; we are energized by her presence and profoundly grateful for her service.

A graduate of LeTourneau University, Michele lives in Longview and is a proud graduate of its high school (in the same class with Matthew Mcconaughey). She is our very own Longview Lobo!