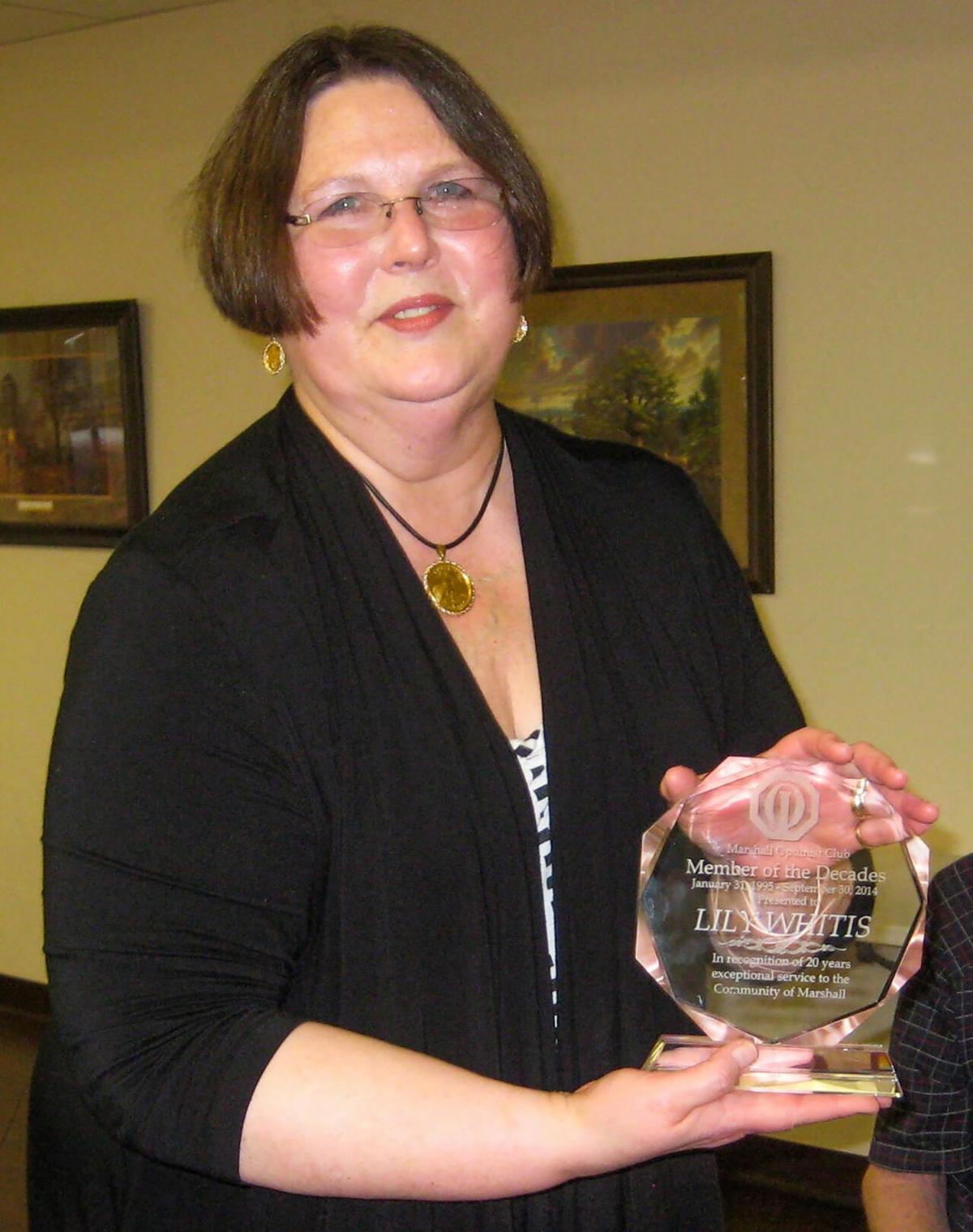 Lily Whitis holding her plaque in honor of 20 years of service through the Noon Optimist Club. 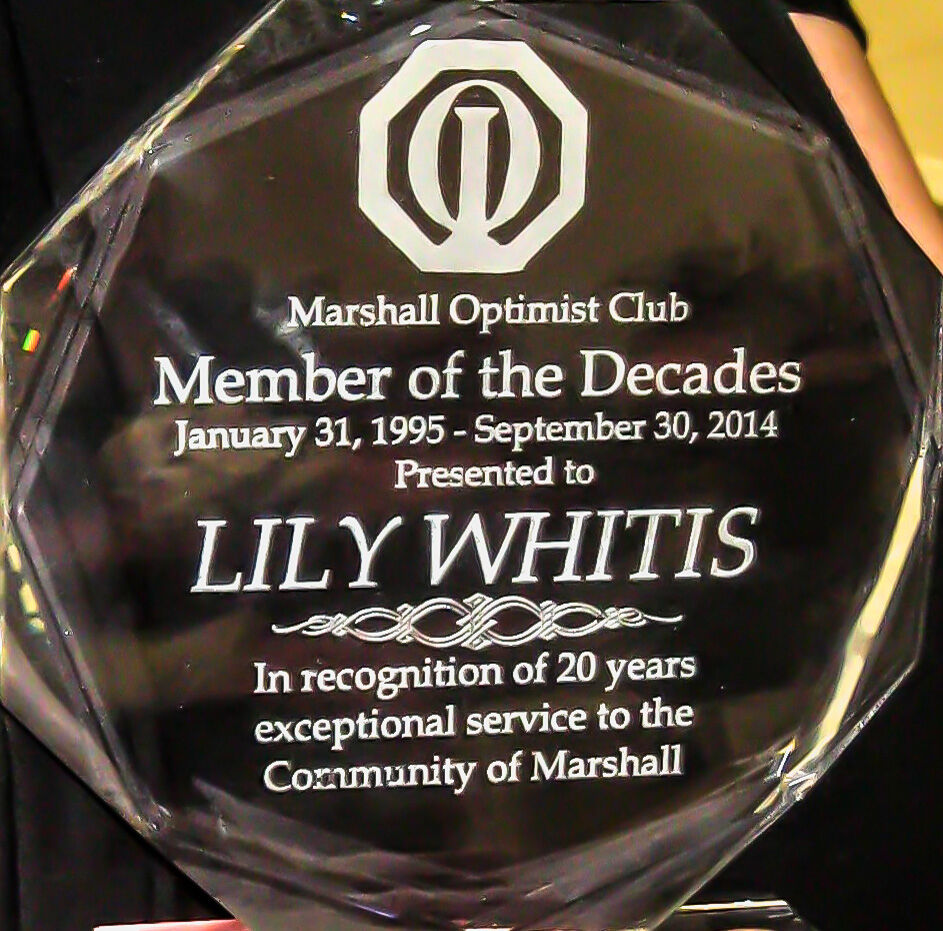 Lily Whitis holding her plaque in honor of 20 years of service through the Noon Optimist Club.

The Noon Optimist Club of Marshall met in person on June 2 in Hutchins Hall of the Cumberland Presbyterian Church and shared memories of longtime secretary/treasurer who recently died.

The meeting was held under the leadership of President Julie Brock, Secretary Melissa Al-Ahmadi and Treasurer Michele Fuller.

Optimist Adam Adair opened the meeting with prayer. Treasurer Michele reported that the memorial patch for the club’s honors banner for Rusty Asaff has been received from Optimist International. The club voted to purchase a patch in memory of Optimist George Earl Bennett and Optimist Lily Whitis.

President Brock reported that the Uphill in Downtown Run for the benefit of the 4-H Clubs and of the Boys and Girls Club of the Big Pines has had to be rescheduled if it will be held. The club’s sponsorship remains in effect nevertheless.

The club noted the absence of Optimist Ned Calvert. Optimist Richard Magrill talked with him the next day and discovered that Ned’s wife Sarah has taken a turn for the worse in her struggle with COVID-19 in Christus-Good Shepherd of Longview. Sarah died on Friday, June 4; the club asked all to “please lift up Ned and his entire family in your prayers.”

President Julie shared the news, only recently communicated to the club, of the death on April 29, 2021 of their former secretary/treasurer, Lily F. Whitis. She was 72 and a native of Marshall.

Optimist Jim Oswalt recalled that he was working on an audit at Louis A. Williams, Associates (LAW) in 1974 when Lily first came to work there. She was LAW’s corporate secretary and compliance officer at the time of her retirement 40 years later in 2014.

Lily was recognized as the Noon Optimist Club’s “Member of the Decades” that same year. She was the behind the scenes, detail person who not only kept records of meetings, reporting them faithfully to the Marshall News Messenger, but tracked attendance and finances and did the organizational work for various projects. Perhaps, the most challenging of those projects were the 10 years of golf tournaments with which the club began this century.

Lily and Optimist Le Ila joined the club in 1995. It would be three years before Lily was officially elected secretary-treasurer, but she may have been doing the job even before she joined. Certainly, as Optimist Richard Magrill pointed out, she was handling the money for the auction of the Marshall Depot Playhouse, built by the club under Optimist and architect Joe Boucher’s direction and raffled off in December of that year.

“It was really easy to be president when Lily was our secretary/treasurer. She knew the duties and the workings of Optimist International, and she just programmed me to do what needed to be done,” Optimist Le Ila said.

President Julie reminded us that “Lily was the oldest of five and the quintessential eldest child.” One of her sisters reported that “she was definitely the leader and did her best to keep the rest of us in line; she was like a second mother and that probably explains why she so often advised, ‘dogs are much easier than kids!’” Dogs were in fact a much loved and constant part of Lily’s life.

As you might expect, Lily was an over-achieving student and set the bar high for the rest of her siblings. Growing up the Marshall schools meant that inevitably at least one teacher each year would ask them if they were related to Lily Ann. “We would answer ‘yes’ and hope and pray they didn’t, consequently, expect too much of us.”

Julie noted that Lily enjoyed fishing and traveling. Some of her travels she shared with the club, like the 2008 cruise which she and her husband Larry took to Alaska. She was also an avid football fan and whenever the Maverick coach addressed the club in August each year she always pressed him for specifics about the team’s preparedness. She was also an avid cook/baker and was well known for the pecan pies and hot sauce that the made and shared.

The members who knew her expressed the hope that their sharing had been of interest to the newer members of the club.

Sharing this week’s good news, Optimist Le Ila noted that for children raised in the Jewish faith, a bar or bat mitzvah is the celebration of the symbolic passage into adulthood. While at age 13, we’re not truly grown up, we can begin to see our place in the larger world.

What Lindsay Sobel saw in the months leading up to her own bat mitzvah was that a life of privilege wasn’t a blessing that everyone shared—and she was determined to do something about it.

As she became increasingly aware of the day-to-day hurdles homeless people living on the streets of Los Angeles faced, one thing Sobel saw time and again was how many lacked proper footwear.

For her Tikkun Olam—an “act of repairing the world” central to the bat mitzvah ceremony—Sobel came up with the idea to launch Shoes for Soles, a charitable outreach program that collects and distributes shoes for Southern Californians in need.

“Part of the requirement for having a bar or bat mitzvah is that in some way you give back to your community, give back to the world,” Sobel told KNX-1070 News Radio. “I decided I wanted to give back as big as I could.”

Since its inception, Shoes for Soles has “re-homed” 30,000-plus pairs of gently used shoes collected during school shoe drives and from shout-outs to her fellow volleyball players and their families.

When the coronavirus pandemic caused many of her usual sources to dry up, Sobel took to the Internet to solicit donations via the Next Door app. The trickle became a steady flow once more.

Sobel only accepts shoes in good condition. “I want to try to give the best experience to all the people,” she told A Mighty Girl. “A fresh, new pair of shoes can really brighten someone’s day, brighten their attitude, and their outlook on life.” Sobel’s example reminds us “to think only of the best, to work only for the best, and expect only the best” of ourselves and others.