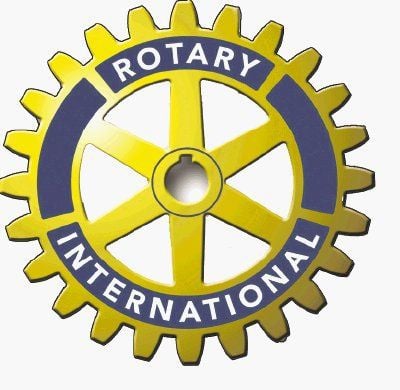 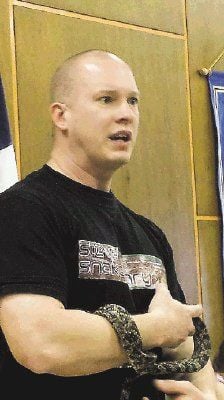 Steve Kennedy with a member of his Snaketuary at the recent Rotary Club meeting.

Steve Kennedy with a member of his Snaketuary at the recent Rotary Club meeting.

The meeting was called to order by Past President Ted Huffhines after a meal of salad, chicken spaghetti, green beans, bread, chocolate pudding, and tea, catered by Pick-N-Pay Deli.

The opening blessing was offered by Glen Bickerdike followed by the Pledge of Allegiance to the United States led by David Collins. Craig Vanbiber introduced new member Bart Day who was proposed for membership by Randy Wooten.

Day is the Vice President for Student Learning at Texas State Technical College. Day is retired from the USAF after 30 years of service. The guests of members were introduced and several announcements were made.

Ted Huffhines introduced Steven Kennedy who owns Steve's Snaketuary in Shreveport. Steve was presenting his program along with his wife Patricia, their three children and a dozen or so captive and captivating reptiles. Steve has been handling snakes since he was four years old.

Steve said "As long as I can remember, I've had a fascination with snakes. I used to always catch little ground snakes when I was a kid. My parents hated me keeping those in a cage outside. I remember seeing my first speckled king snake when I flipped over a piece of board in a lot behind our house. Then I remember my dad killing one in our backyard that same summer. I kept the body of the one my dad killed in a jar for a few days. I was just mesmerized. Then, when my parents moved into their new house (sort of in the country), I saw my first copperhead. It bit my dog on the nose, and of course my dad killed that one too. I also saw my first Texas Rat Snake in the shed in the back of that house. Throughout all of those years, my interest and love for snakes continued to grow.

Several years after I got married, I bought my first "real, pet" snake, a baby corn snake. All of a sudden, it seemed like my enthusiasm exploded. Although my parents still didn't like the idea, my wife was very supportive, and now she and my kids love snakes too. Snakes are actually our best pets.

My hobby has now turned into a passion, and my pastime has turned into a pursuit. What was once a recreation has now become very relevant. Throughout the years, since our pet snake collection has grown, we have also seen how ruthless people can be toward snakes. Every summer, we constantly see dead snakes in the road and hear horror stories of people killing them in their homes and outside.

That's how Steve's Snaketuary was born. It's not just about wonderful and beautiful collection of snakes. We have become a "sanctuary" for snakes. We also offer safe removal, relocation, and rehoming of snakes. And, we are here to help educate you on the importance of snakes. We are here to show you how beautiful a snake can be and also how helpful snakes can be."

Everyone was interested in the most venomous snake which of course is the snake that just bit you. Coral snakes have neurotoxic venom whereas other snakes have hemotoxic venom. Antivenin for coral snakes is no longer being made because of the cost. Coral snakes are not rear fanged contrary to popular misconception.

There were several questions from the audience, and then Past President Huffhines advised Kennedy that because literacy is a major focus of this club, a book would be donated in his honor to the library of a local elementary school. Jeff Henderson led the members in the 4-way test and the meeting was adjourned by Past President Huffhines. Kennedy stayed to answer several further questions from members.

Both Rotary International and the Rotary Club of Marshall are committed to expanding the organization, but most importantly serving the community. If you have a desire to serve, and give back to your community, contact any Rotarian to discuss membership requirements.