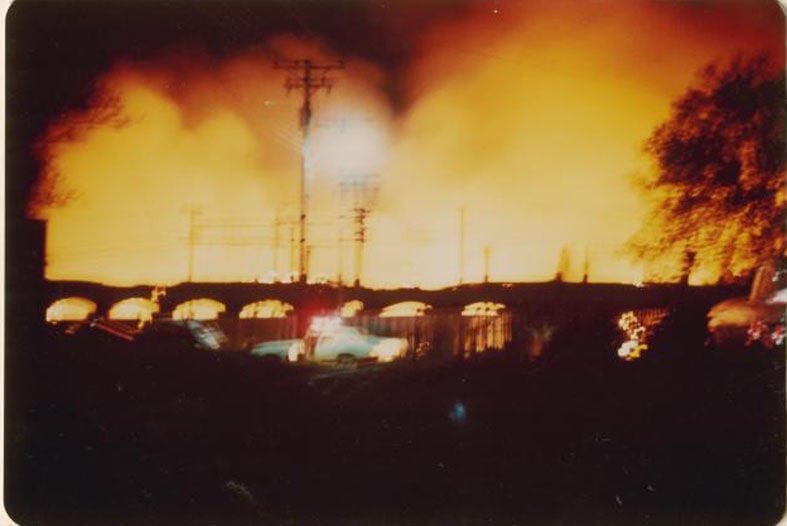 The April 1, 1971 fire at the T&P shops in Marshall are shown. April 1, 2021, marked the 50th anniversary of the monstrous blaze. The photo is from University of North Texas Libraries, The Portal to Texas History, https://texashistory.unt.edu; crediting The Grace Museum. 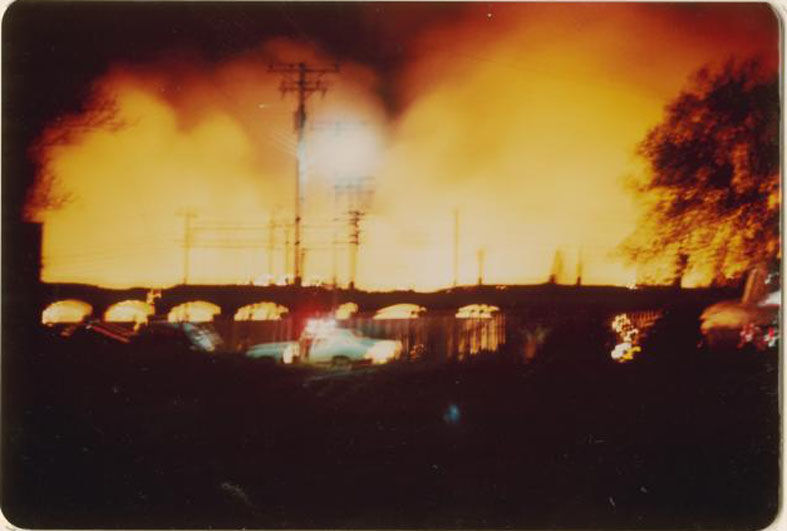 The April 1, 1971 fire at the T&P shops in Marshall are shown. April 1, 2021, marked the 50th anniversary of the monstrous blaze. The photo is from University of North Texas Libraries, The Portal to Texas History,

The April 1, 1971 fire at the T&P shops in Marshall are shown. April 1, 2021, marked the 50th anniversary of the monstrous blaze. The photo is from University of North Texas Libraries, The Portal to Texas History, https://texashistory.unt.edu; crediting The Grace Museum.

The April 1, 1971 fire at the T&P shops in Marshall are shown. April 1, 2021, marked the 50th anniversary of the monstrous blaze. The photo is from University of North Texas Libraries, The Portal to Texas History,

This month marks the 50th anniversary of what was deemed the largest blaze in the town’s history — the 1971 burning of the Texas and Pacific Railway shops.

“The evening will go down in history as the saddest and most depressing day for the Texas & Pacific Railway family in Marshall, a day that sealed the fate for what remained of Marshall’s massive and proud shops,” said Daryl Ware, a retired train conductor, Marshall Depot board member and member of Harrison County Historical Society.

It was April Fool’s Day, April 1, 1971, when the blaze erupted, causing $5 million worth of damages, destroying the machine shop, freight car shop and coupler shop. The fire was so massive it could be spotted from as far away as Elysian Fields.

“It was huge,” Ware, who was a little boy at the time, recalled. “It was seen from Elysian Fields and probably seen from Caddo Lake, Harleton and Hallsville.”

In observance of the 50th anniversary, Ware, who is also in the process of penning a book on the history of the railway in Harrison County, shared some reflections of the tragic day and how the shops and T&P employees contributed greatly to the community.

“As evidenced by the front page stories and photos in the following day’s Marshall News Messenger, it was indeed a traumatic story to unfold for the community as much as it was for the employees,” Ware said in an interview with the News Messenger on Tuesday.

“Not knowing what the future would hold, you could sense the tears being held back from the words of Superintendent Edd Clark as he was interviewed by the local paper the next day,’ said Ware.

“The railroad was their livelihood,” said Ware.

An integral part of the community

Not only was T&P the largest employer for the county at the time, but it was the highest paying employer locally and most likely the surrounding area.

“They were known, even after World War II, to be the largest shop south of St. Louis, (Missouri),” said Ware. “So that’s a big deal.”

Ware said railroading was a part of life for everyone, and because of the economic impact the business had on the community, mutual respect was shown between the town and the company.

“They got along. They cooperated with each other,” Ware said of the relationship the railroad had with the city.

He recalled Marshall hosting an annual T&P Day, celebrated by all the downtown merchants.

“The downtown area was where you did the shopping, and they all had some type of display in their windows recognizing the T&P and how much it contributed to the city,” Ware recalled.

“It was the largest employer as well as the highest paid employer. And the good thing about that it was white (employees), black (employees); it didn’t matter,” he said. “They had jobs. And it provided families with food. During even the hard times they would actually reduce the labor, instead of an eight-hour or 10-hour work day, they would go down to a six-hour work day so they could hire more people in order to have more employees to be able to get checks to take care of their needs.”

The T&P shops were located in Marshall in 1873 on a portion of the 66 and a half acres of land donated by the city. The city donated the land under the condition that T&P would maintain its shops and general office in the city and establish Marshall as its eastern terminal.

The Marshall shops were tasked with repairing all wrecked cars in the Missouri and Pacific Railway system. In the 1920s, the company had as many as 3,000 workers employed in Harrison County. Ware’s father even had a career in the railway, working one summer at the T&P Railway shops in Marshall, at age 16.

“By the time the shops burned, it dwindled down to 144,” said Ware, expounding how the numbers dropped due to the transition from steam locomotive to diesel.

The charred shops, which were housed in a large brick building approximately 300 by 500 feet, consisted of three separate working areas for the boiler and machine shop, freight car shop and coupler shop. Ware was only 9 years old when the compound burned, but he still remembers the day vividly.

“I do remember when it happened,” he said. ‘I was with my dad driving around. You could see the embers floating in the air, just floating all over Highway 80.”

Fire officials didn’t know what exactly caused the fire, but did note it sounded like an explosion.

“I was almost 10. I was a little boy. I felt like this is a big deal,” Ware said of his thoughts, at the time.

According to the April 2, 1971, issue of the News Messenger, detailing the April Fool’s Day tragedy, firemen received the first alarm for the fire at 8:59 p.m. The fire was initially reported by an off-duty fireman leaving the north side station on Bolivar. He alerted the firemen after hearing an explosion and seeing the fire.

Prior to that, things were quiet around 8:45 p.m. as a switch crew rode down the tracks by the shops. Approximately 10 minutes later, however, the crew was stopped by an apparent hobo who reported seeing the railroad area burning, the newspaper noted.

Nearby residents also reported a loud explosion and the sight of rapid fire throughout the building. Three smaller explosions were also noted.

Five fire trucks and nearly all members of the fire department, including off-duty firemen, were summoned to the scene, fighting the blaze until 2 a.m. to stop any spread to surrounding buildings. Firemen remained on the scene until 8 a.m. for precautionary measures. Superintendent Clark noted up to $5 million worth of damages, including the building and equipment. A total of 26 railroad cars, valued at $500,000, were also ruined.

Very little, if anything, could be salvaged in the freight car shop. The newspaper reported that an additional undetermined amount was lost in the expensive machinery, including lathes, metal sheers, presses, welding machines, air compressors, forklifts and car straighteners.

Luckily, the coach shop, which maintained and built the coaches for passenger cars, sustained minor damage.

“It was a terrible event,” said Ware.

At least two grass fires resulted from the major fire. Then-Fire Chief Gene Walker noted that more than 260,000 gallons of water, which equated to a three- to four-months supply for fighting normal fires, were used.

Looking at the site now, one would never know the once bustling operation that thrived there before.

“To me, it’s depressing,” Ware shared. “I could remember vaguely how it used to be.

“They were able to save the coach shop. It managed to survive until they finally closed those down,” Ware recalled, noting it closed in the early 1980s. “I can remember that because that was a sad deal. By the time they closed the final shops in June 1981, they had come down to 29 employees.”

Speaking of the uncertain future of the T&P shops at the time, Superintendent Clark described it as heartbreaking as he faced the task of notifying 144 men that their jobs were destroyed.

Getting choked up, Clark expressed that the railroad shops had been his “everything.” He counted it as a “great loss” to the generations of fathers, sons and their sons, who invested many years there.

“The railroad was the hub of Marshall for a long time,” Clark stated, at the time.

Ware said the destruction of the car shop proved too devastating for management to rebuild.

“As the loss of jobs became a permanent reality, the once vast Marshall shop complex was relegated down to a mere handful of men whose only structures remaining that were still occupied by the mechanical department consisting of the old coach shop, sandblast and paint sheds, the three-story brick building, the reclamation plant shop and the water tower,” explained Ware.

Other surviving structures were the maintenance of way shop, signal shop, signal department warehouse and the vacant tank shop building.

“They decided that Marshall was not a place for reinvestment in the shops,” Ware recalled. “I can remember those days. It was a minor repair shop by then. No major repairs. And it wasn’t long after that, Missouri Pacific was merged into Union Pacific.”

Ware, who worked for Missouri Pacific as a conductor for 35 years, first fell in love with railroading as a pre-teen boy, visiting the Marshall yard with his father, who was a wood dealer for International Paper Company.

“I had the privilege of experiencing a once-in-a-lifetime opportunity debuting as a pre-teen boy to get to know the makings of Marshall Yard and the fine railroad men that made it function like a well oiled machine,” Ware said. “My love for railroading grew exponentially in 1971 when my father leased a spur for loading pulpwood. I can still remember the track number — No. 748.”

His passion for railroading ultimately grew into a beloved career with Missouri Pacific, starting at age 18 in the operating department, which included the conductor/switchman and brakeman services.

Reflecting on the shops he remembers as little boy, Ware said he’ll never forget the craftsmanship of the skilled railroad men.

“As those men passed away, so did their skills,’ he said. “Those crafts are no longer being put to work. We had an upholstery shop… you could imagine… everything that went into building a railroad. Those men, they had the capability of doing anything.”

Ware said he’s writing his book, “The History of Railroading in Harrison County, Texas; and the People That Made it Happen” to honor the employees and keep the county’s railroad history alive.

“The employees have never been recognized,” he added. “If we only knew now what they were capable of doing in the shops we would be blown away.”