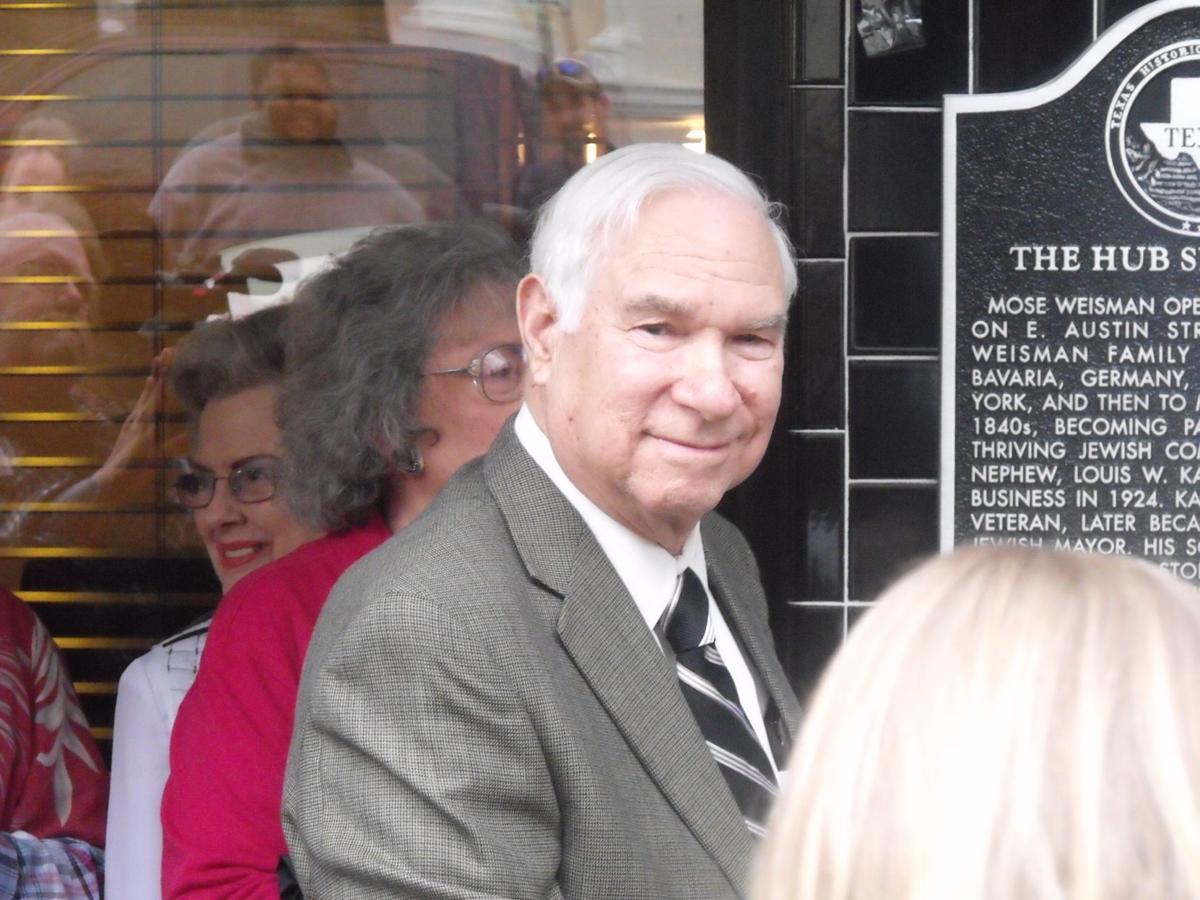 Louis Kariel Jr. is shown at the historical marker dedication of his family’s longtime business, the Hub Shoe Store. Kariel died at age 92 on Sunday, Jan. 5, 2020, leaving a significant legacy. 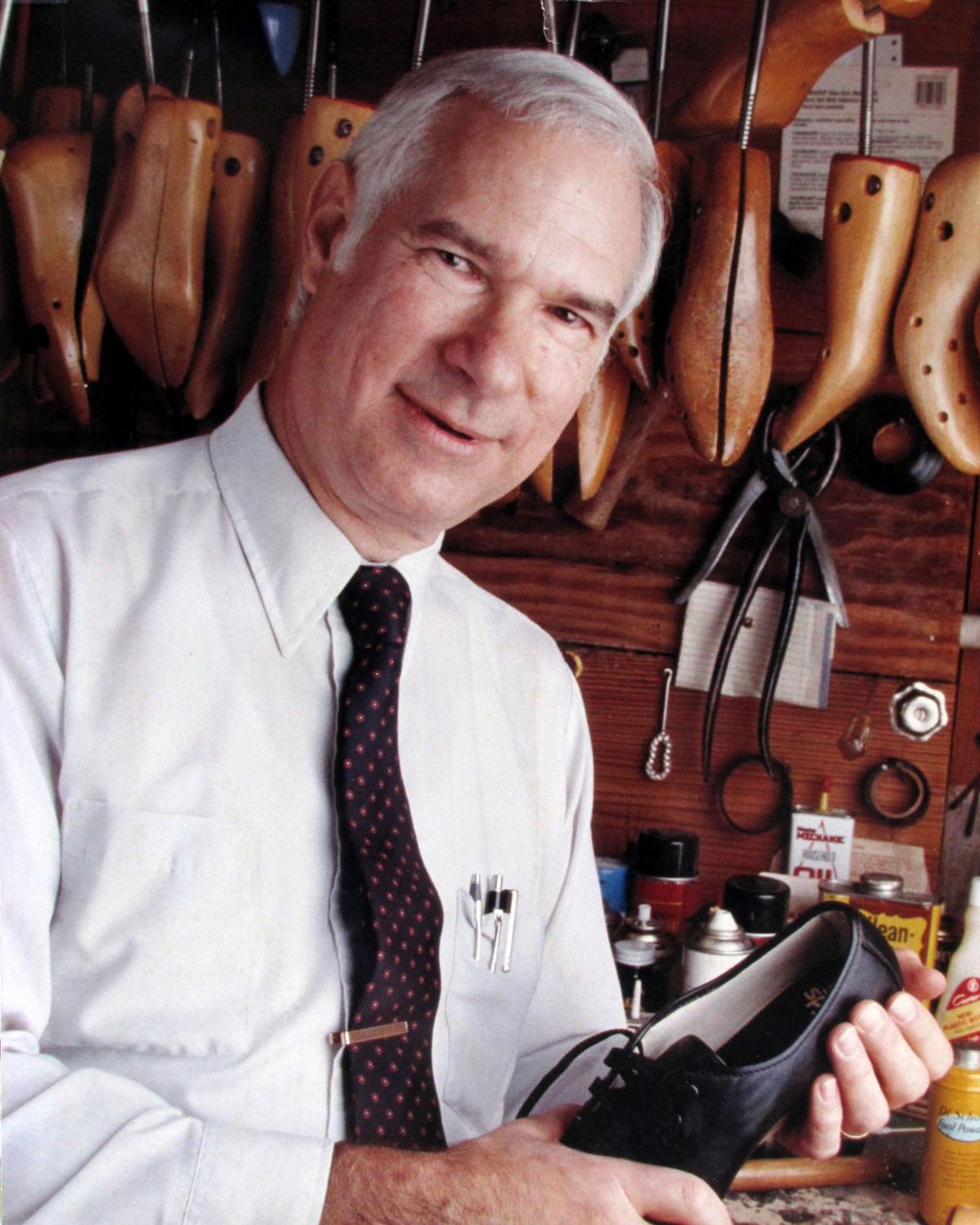 Louis Kariel Jr. is shown at the historical marker dedication of his family’s longtime business, the Hub Shoe Store. Kariel died at age 92 on Sunday, Jan. 5, 2020, leaving a significant legacy.

An upstanding businessman, who loved his town immensely and selflessly served in various capacities for the progression of his community, is how those who knew and loved Louis Kariel Jr. remember him.

Kariel, former owner of the historic downtown landmark, Hub Shoe Store, died on Sunday at age 92. His celebration of life was held Tuesday.

“Louis touched an awful lot of Marshall, Texas while he was there all his life,” his wife, former Marshall Mayor Audrey Kariel, said. “It was very sad for me to lose him. He’s 92 and we’ve had a wonderful life and most of it was spent working for Marshall.

“He loved Marshall,” she said.

Kariel, a Navy man and World War II veteran, loved his hometown so much that he returned with his bride after graduating from the University of Texas in Austin, making it their permanent residence.

As a businessman, Kariel managed his family’s longtime business, Hub Shoe Store, in downtown Marshall until his retirement in 2001, marking an end to the store’s 104 year-old history. Kariel, the great nephew of the shoe store’s founder, had run the business six days a week since his return from the war and college in 1949. He became owner in 1969.

Local attorney Michael C. Smith, who now operates his law office, Siebman, Forrest, Burg & Smith LLP, out of the landmark is grateful to have shared that connection with Kariel and preserve the family’s legacy.

“It has been an honor to be able to help recognize the contributions Louis and his family have made to Marshall, both through the store and through their commitment to volunteering to help better our community,” said Smith. “They’re a part of Marshall’s history, and it’s been a great experience to learn about that history and pass it along to future generations.”

In addition to their business legacy, Kariel and his family also represented another relevant part of Marshall’s history as the last remaining members of the town’s now dissolved Temple Moses Montefiore congregation.

Kariel served as lay rabbi for the town’s sole Jewish synagogue before its demolition in 1973. He then served as rabbi for Longview’s Temple Emanu-El. Some of his family’s artifacts are part of Harrison County Historical Museum’s permanent exhibit, “Global Connections,” which highlights Marshall’s Jewish history, and opened in 2017.

In the civic community, Kariel worked tirelessly along with his wife on several projects, most notably the saving of the historic Texas and Pacific (T&P) Depot. Threatened to be bulldozed, the Kariels spearheaded a project to renovate the passenger station and establish a museum there instead.

Because of their vision, both AMTRAK and TEMPO (Texas Eagle Market and Performance Organization), in 2012, surprised the Kariels with the unveiling a plaque that dedicated the station’s waiting room in their honor.

“The vision that saved that depot for Marshall did a huge favor for people along the Texas Eagle route,” Dr. Bill Pollard, then-president of TEMPO said, at the time.

Christina Anderson, who is a passenger rail advocate along with husband former state senator and former county judge Richard Anderson, shared how honored she’s been to have worked with the Kariels on several projects.

“Richard and I have both had the honor to work on a numerous volunteer projects with Louis and Audrey, including the (historic) courthouse restoration, Amtrak passenger rail efforts, Marshall Depot Board, among others,” said Anderson.

“It would be difficult to overstate the positive and uplifting impact that Louis Kariel, Jr. has had on our community and on all the many lives he has touched. Plus, just seeing Louis’ smile could cheer you for the rest of the day,” she said. “The deep and abiding love that he had for his dear wife, Audrey, and for their family and the lifelong commitment they shared to bringing progress to our community and making our world a better, more caring, kinder place has been a blessing to all of us who’ve had the honor to work with them as volunteers and to love them as friends.”

The Kariels are also credited to saving Marshall Symphony Orchestra, along with other founding members.

“We probably would have not had a Marshall Symphony today would it not have been for Louis and Audrey Kariel,” said Leonard “Lenny” Kacenjar, the orchestra’s former conductor of 39 years.

Kacenjar said after coming onboard he was contemplating on disbanding the orchestra due to a lack of funding. Thus, the Kariels, Connie Ware, Dr. Shirley Handler, and Kacenjar teamed up to save it.

“I worked for several years without being paid, so we did garage sales and poinsettia sales to keep it going and pay the musicians and the orchestra,” he recalled.

“That was one of the biggest things, deciding to keep the Marshall Symphony alive,” said Kacenjar. “Those were the people that made it happen.”

Milly Green, a past president of Marshall Symphony Society, said the organization has always appreciated Kariel’s support throughout the years.

“He was so very well thought of by the symphony and all of the hard work he and his wife had done to support the symphony,” she said, noting they helped her write a proclamation in celebration of Marshall Symphony Orchestra’s 65th anniversary in 2017.

“We were all just devastated with his loss,” Green said of Kariel. “He was very dedicated.”

Former assistant city manager, Janet Cook, said she’s always appreciated Kariel’s kindness and concern for others. She first worked with Kariel in the mid-1980s when they both served on the Chamber of Commerce retail trade committee.

“Those were difficult times for downtown merchants,” she recalled, “but Louis was always so positive about whatever the committee worked on.

“He rolled up his sleeves and went to work after a decision was made on a project or promotion,” Cook said. “I appreciated that so much.”

“Over the 20-plus years while we worked together on downtown redevelopment we could depend on Louis to bring this same great attitude to the task at hand,” she said.

Audrey said her husband loved working in the chamber, where he served as president in 1968 and as retail committee chairman for many years. In 2019, the couple was named the Chamber’s 2019 Innovation Award winners.

Kariel also enjoyed being a member of the Marshall Lions Club where he also served as a past president. Lions Club member, Robert Wood, said he embodied the international organization’s mission.

“They don’t get any better than him,” said Wood.

“He’d been a member of the Lions Club for 60 years and was certainly a member when I joined nearly 30 years ago,” said Wood.

Wood said Kariel was always an active supporter of the Lions, and still received the newsletter from the club, even up until his death.

“He was always the first to volunteer for whatever needed to be done and he was very interested in downtown projects and anything that allowed him to make the community better,” said Wood. “He was everything that the Lions Club International stood for.”

Kariel was also a member of American Legion, a Mason for more than 50 years, and served about 20 years on the city’s planning and zoning committee, to name a few. As valedictorian of his class, he believed in education and often supported the Marshall High School Student Council.

As a president and longtime member of the Citizens’ Advisory Council, Kariel supported many efforts for the advancement of the community.

“Louis Kariel Jr., his wife Audrey, as well as his father Louis Kariel Sr. were all members of the Citizens’ Advisory Council for many, many years,” said Dr. Jim Harris with the CAC.

The Council is a non-partisan group of about 60 area business and professional leaders who meet monthly to evaluate, debate and act upon matters of civic, educational, or economic importance to Marshall, Harrison County, or Texas.

“Louis and Audrey, as well as his father, were important fixtures in the Marshall downtown,” said Harris. “They were among the nicest and most hardworking citizens that the city has ever been privileged to have.

“Mrs. Kariel orchestrated a multitude of local innovations and projects with Louis’ unfailing support. He stayed quietly in the background, but he was always there, always with her,” said Harris. “He was an exceedingly pleasant, thoughtful, intelligent, and kind gentleman.”

Audrey once described her husband as the “unsung hero”, inspiring her as she worked to build a library in the 1970s and complete plans and funding for the Civic Center auditorium.

“He loved people and he loved Marshall,” Audrey Kariel said, sharing how Louis loved celebrating his birthday at the hometown restaurant, Neely’s, every year.

“Our prayers are with all the Kariel family and, in Louis’ honor, we send forth a heartfelt ‘Hook ‘em Horns,’” she said.