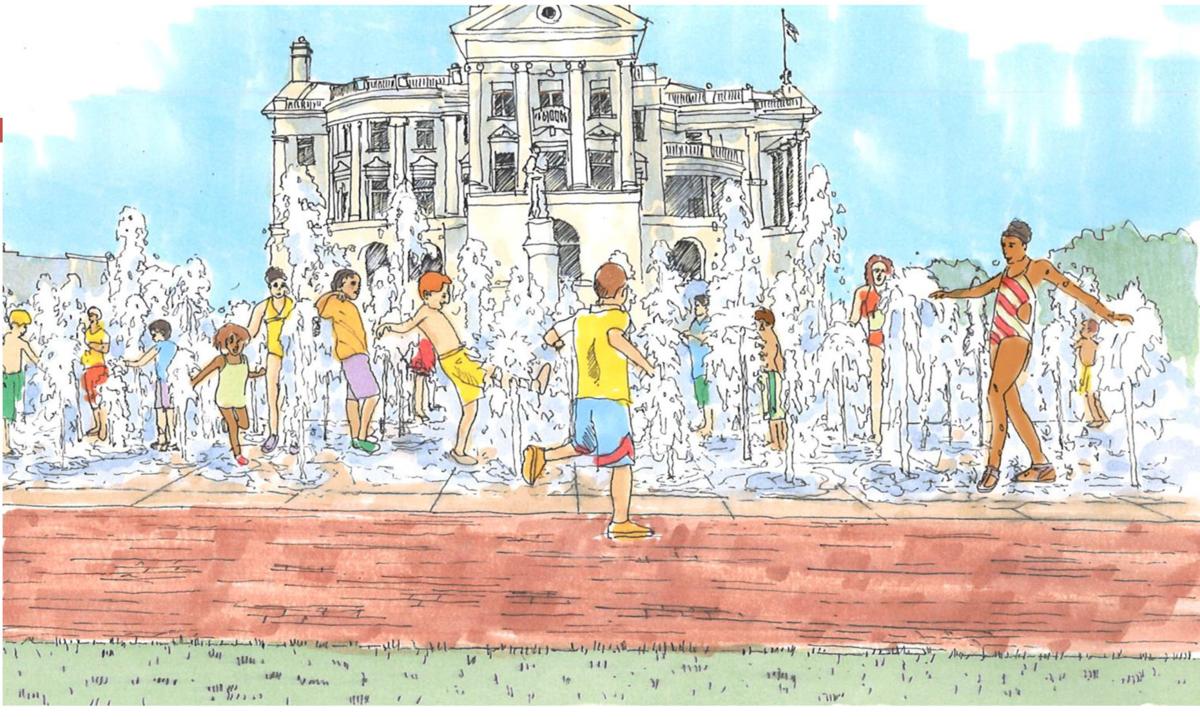 A splash pad is one of the items drawn with the city’s proposed Downtown Redevelopment plan. However, the Courthouse Endowment Board is unsure of the plan and who owns the property. 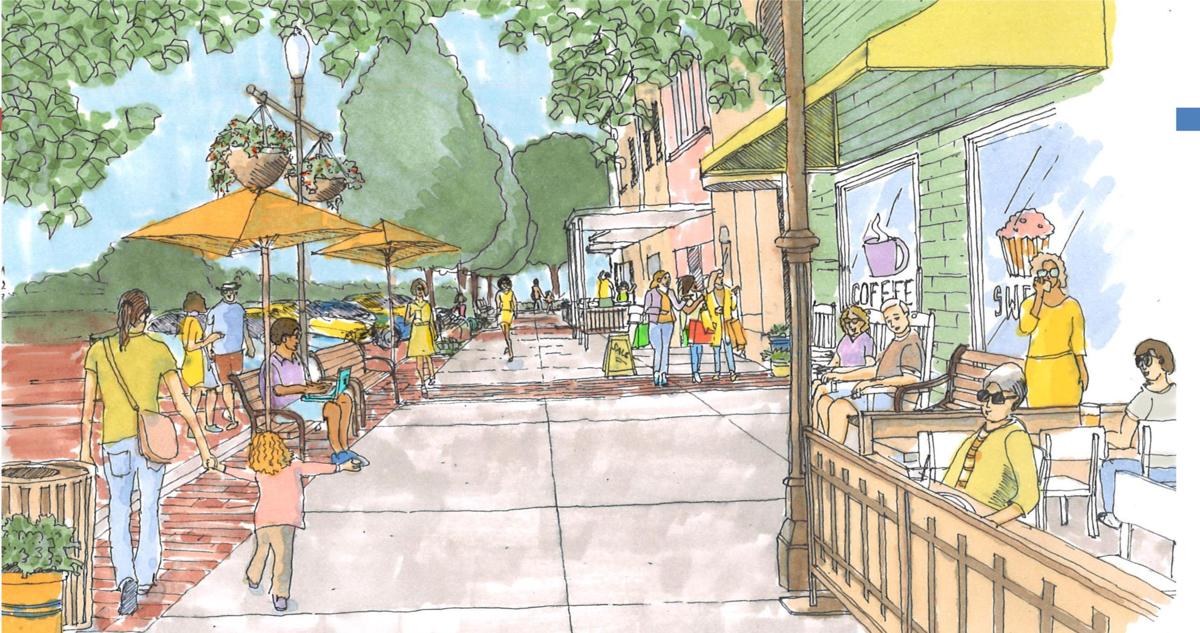 Downtown improvements for sidewalks are part of the proposed downtown redevelopment plans. 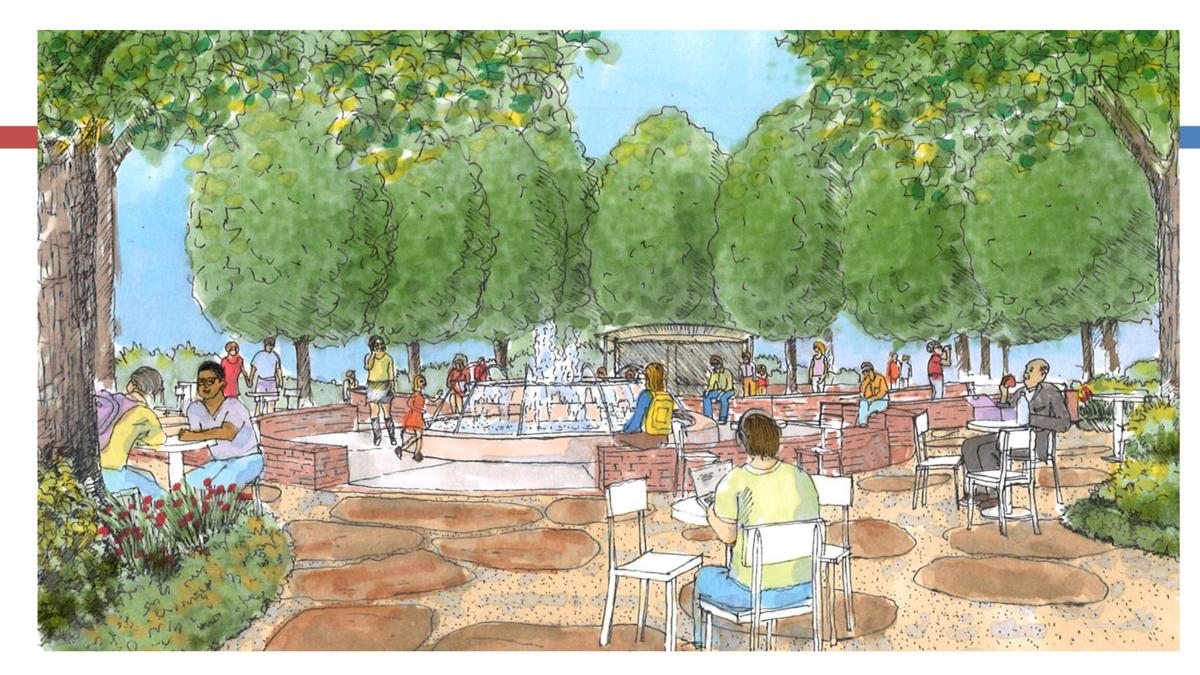 Fountain and outdoor seating areas are part of the downtown redevelopment plan.

A splash pad is one of the items drawn with the city’s proposed Downtown Redevelopment plan. However, the Courthouse Endowment Board is unsure of the plan and who owns the property.

Downtown improvements for sidewalks are part of the proposed downtown redevelopment plans.

Fountain and outdoor seating areas are part of the downtown redevelopment plan.

The city of Marshall’s proposed downtown redevelopment plan continues to draw interest of concern, most recently from the Harrison County Industrial Development Authority, commonly known as the Courthouse Endowment Board, whose mission is to assist the county with ongoing preservation of the restored 1901 Harrison County Courthouse.

The volunteer courthouse manager, Richard Anderson, who is also a former county judge, was also present. Anderson stated she placed the item on the agenda because the plan deals with the downtown courthouse square area.

While the plan calls for road closure in front of the courthouse, the largest component includes the creation of a green space and outdoor theater area on the east side of Peter Whetstone Square.

Additionally, the city plans to add an interactive water feature for children. A canopied stage is in the proposal to serve as an outdoor theater venue.

Ample outdoor seating is planned for the southern portion to enable a sight line to the stage. Rohr has explained that the reuse of this space would take away parking spots in front of the courthouse.

As a result of the plans, the Texas Historical Commission recommended to the HCIDA to have the county conduct a survey of the grounds, to at least try to establish ownership, before any further action proceeds.

Ebarb said he doesn’t understand how the city’s plans were even drafted before determining who the actual owner of the property was – the city or the county.

“I look at it as me driving around, anywhere, out in the county and finding me a hillside with a big pond on it and just go out there and say I’m going to build me a house,” the county commissioner said. “This is the same deal.

“I’m not against growth and them building whatever the people in the city feels like they need, but let’s determine (ownership) before you project where you’re going to build it because it might need to change,” Ebarb continued. “To me, that should’ve been step one, but it wasn’t.”

Former Marshall mayor, Neal, who works at a downtown real estate office, expressed his dismay about the city not doing due diligence to reach out to downtown business stakeholders, for input.

Anderson said she only became aware of the plan after being approached about the addition of Lady Bird Garden, a separate project being developed by the Andersons and their partners, Jerry and Judy Cargill, on land they own on the west side of The Marshall Grand.

“So we were asked about that,” said Christina. “But then it came up in discussion about: ‘What plans were on the east side? What was county land, and what was city land?’”

She said those questions have been raised before. Richard has done research, dating back to the establishment of Peter Whetstone Square to try to put the answer to rest.

“But where we are right now is, in discussions with the Texas Historical Commission, they’ve recommended that we do a survey of the boundaries, that would help to found out boundaries so that then we could perhaps find out what the boundaries are, so that would (form) the discussion about who owns what land,” said Christina.

She said during a meeting that her husband and their business partners had with Rohr concerning the property for the Lady Bird Garden, they suggested that the city manager meet with Harrison County Judge Chad Sims as well as James Malanaphy, THC’s regional architect and project reviewer, to inform them of the plans, as well as stakeholders in and around the courthouse.

“Our recommendation is to build a consensus in that way and also to provide feedback to them,” said Christina.

As fire chief, Cooper said he hasn’t even been privy to the plans, but he is glad that the HCIDA board brought it to the table for discussion, particularly because he plays dual roles in the matter.

“I wear the two hats,” he continued, referring to his role in the city and on the volunteer county interest committee. “But my biggest concern is protection of people and property, in that order — people first, property next.”

The fire chief said he never wants a situation where there’s a potential fire threat to the downtown district.

“The fire department plays a major role in this,” said Cooper.

“So it gets really notable to me when streets get blocked or cut off or taken away, as far as access,” he said. “It gets notable to me if a hydrant gets taken away or goes down, or anything that narrows the width of a street, because we have to have ‘turn radius’ to be able to get access to these buildings, as well.”

Cooper said the plan won’t cause an issue with being able to take care of people, but it will cause change.

“The exact changes I don’t know because I have haven’t been brought to the table, yet ,” he said.

Neal said the major consensus he hears from fellow downtown businesses is their concern regarding parking, particularly since it’s already an issue when the federal, district and other courts have jury duties are trials.

“If you look at where they’re talking about extra parking, they’re talking about parking lot on the other side of the church or down by Caddo Packing or Central Baptist Church,” Neil pointed out. “I know from people I do business with on the square, they’re not going to park at Central Baptist Church and Caddo Packing and walk up the street (for business matters) on the square.”

Ebarb said parking is the county’s greatest concern, too.

Following Wednesday’s meeting, the HCIDA board sent a letter to Rohr along with a copy of the grant of easement contract, dated May 1, 2001, between the county and the THC, which sets forth the legal obligations of Harrison County with regard to the grant award that the county received in connection with the THC’s Texas Historic Courthouse Preservation Program for renovations of the courthouse.

Christina explained that the Grant of Easement provides guidance to the work and mission of the HCIDA board to assist the county with ongoing preservation of the restored courthouse and courthouse grounds.

Christina said in addition to speaking with THC, she also spoke with the chairman of the city’s landmark preservation board, who shared with her a National Register of Historic Places nominations form he found from 1977, of the courthouse, that notes the property to put on the National Registry. The form outlines the boundaries of the courthouse square as: Houston, the nominating property that’s bounded by Wellington Street on the west side, on West Bolivar Street, on the east, and Sam Houston Street on the north and south.

“We don’t know whether it’s the middle of the street or not,” she said.

The document doesn’t establish title. However, with the survey, recommended by THC, Anderson said they’ll finally get some clarity.

The survey is estimated to cost between $2,000 to $4,000. Board members, with the exception of Redmon, approved to authorize expenditures up to $4,000 to fund it. Redmon explained he believes the city should share in the cost.

Christina said it’s something that needs to be done anyway so the community will have the documentation.

Because the grant of easement also gives THC some property rights in respect to the preservation of historic, architectural, scenic and open space value around the courthouse, Richard said it would be incumbent upon anyone proposing to modify the area to confer with THC.

Christina said they believe that one or more of the components proposed in the plan may not be approved through the State Antiquities Landmark permit process due to certain requirements including the proposed splash pad.

“It’s a great idea for another place, but not in front of the historical courthouse,” she said.

Ebarb said he believes the matter of ownership needs to be determined pretty quickly before things snowball and the board agreed.

“I’m not against growth and them building whatever the people in the city feels like they need, but let’s determine (ownership) before you project where you’re going to build it because it might need to change. To me, that should’ve been step one, but it wasn’t.” County Commissioner Jay Ebarb.