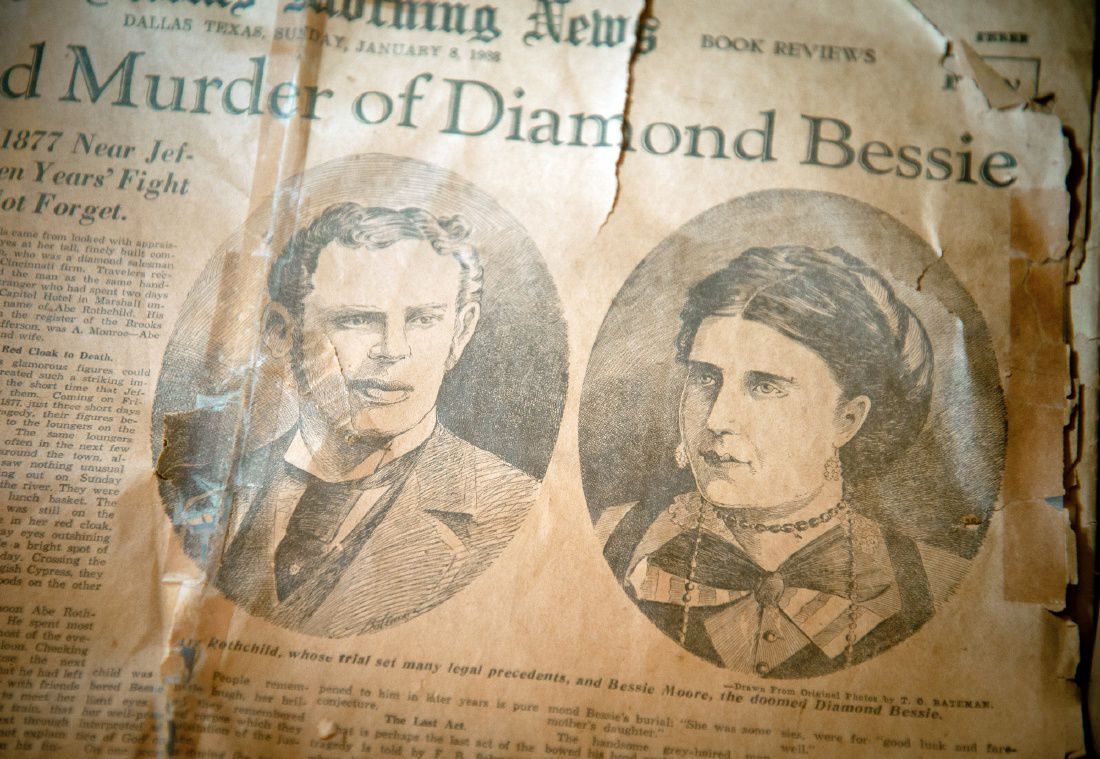 The Diamond Bessie Murder Trial Play, based on real life events, kicks off Thursday at the Jefferson Playhouse. 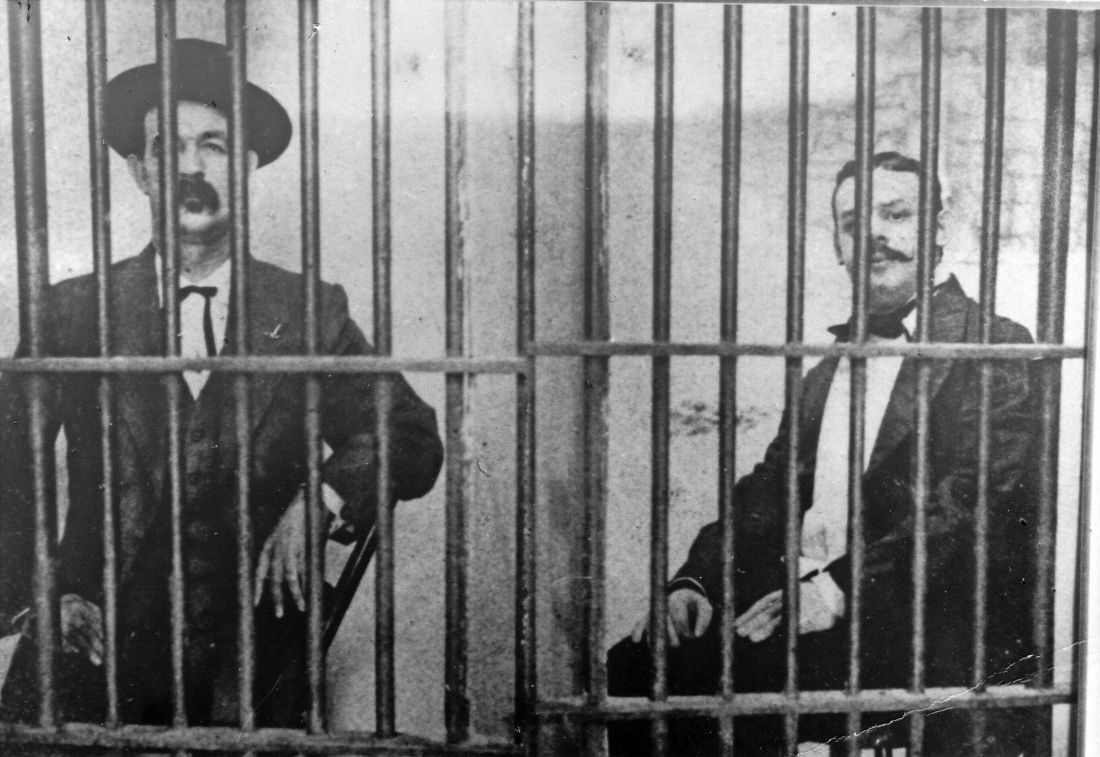 Abe Rothschild, right, suspected of killing his girlfriend Diamond Bessie Moore in 1877 in Jefferson, is seen in his jail cell. 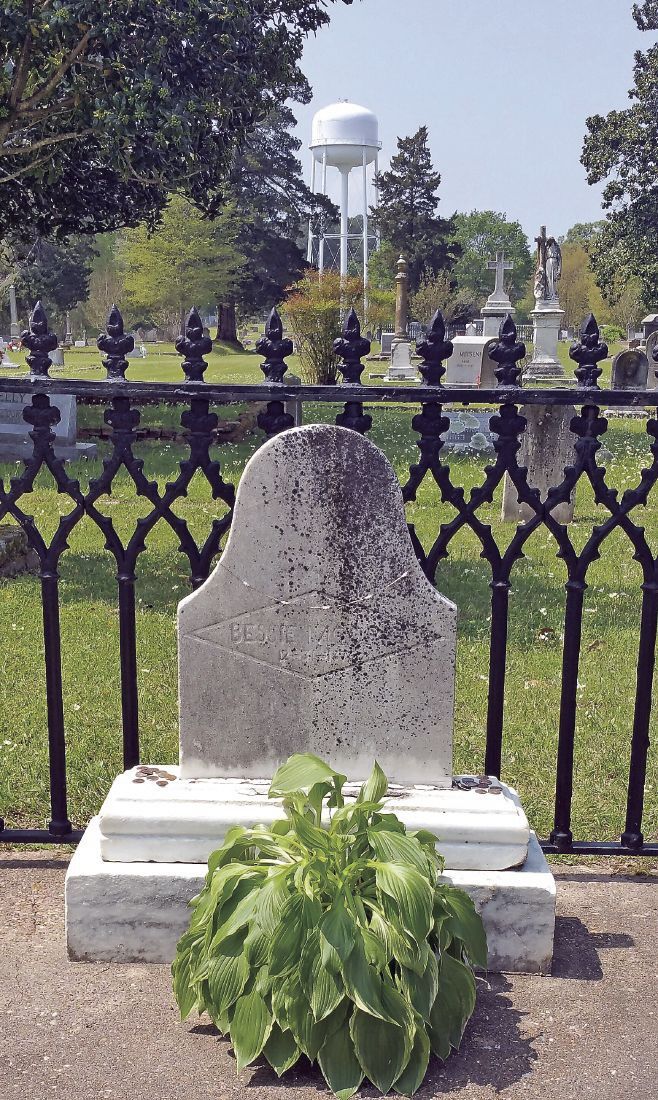 The resting place of Diamond Bessie Moore at Oakwood Cemetery in Jefferson is seen. She was killed in 1877 near the Big Cypress Bayou.

The Diamond Bessie Murder Trial Play, based on real life events, kicks off Thursday at the Jefferson Playhouse.

Abe Rothschild, right, suspected of killing his girlfriend Diamond Bessie Moore in 1877 in Jefferson, is seen in his jail cell.

The resting place of Diamond Bessie Moore at Oakwood Cemetery in Jefferson is seen. She was killed in 1877 near the Big Cypress Bayou.

JEFFERSON — She was a troubled woman whose short life ended near the Big Cypress Bayou in downtown Jefferson more than 140 years ago and this week, the facts of her life and murder will be rehashed in the annual Diamond Bessie Murder Trial Play.

The annual play, which serves as part of the 74th annual Pilgrimage event in downtown Jefferson, is set to debut at 7:30 p.m. on Thursday at the Jefferson Playhouse, located at 1860 North Market Street.

Tickets to the drama can be purchased online at the Pilgrimage website www.jeffersonpilgrimage.com

The play will cover the life, murder and trial of “Diamond Bessie” Moore and her lover and likely killer Abe Rothschild. Moore, a prostitute, and her violent lover Rothschild, a notorious businessman with a bad reputation, traveled to Jefferson for a vacation. The volatile couple who were known for their public fighting, stayed at a local bed and breakfast and reportedly had a lover’s quarrel during their stay.

History records Moore joining Rothschild for a picnic down by the river one afternoon but only he returned from the meet up and she was later found dead. Rothschild quickly hopped a train out of town but authorities tracked him down and dragged him back to East Texas for a trial where he was eventually found not guilty due to a lack of evidence, though he had purchased a gun just days before Moore’s murder.

“In today’s world it would be open and shut. It would’ve only made the back page of the newspaper. CSI would be sent out, they’d know exactly when she was killed. They’d fingerprint the body. But this was 1877, they didn’t even take the bullet out to see what caliber it was,” he said.

The townsfolk in Jefferson paid to have Moore buried in the city’s Oakwood Cemetery and for the past 67 years, the life, murder and trial of “Diamond Bessie” is played out for anyone willing to take a step back in time to a story with a not so happy ending.

In addition to the Diamond Bessie Murder Trial this week, the 74th annual Jefferson Pilgrimage event, including the historic tour of homes and plant sale, will be held.

This year’s Pilgrimage is jam packed with events and activities and all follow the unused theme from last year’s canceled event, “Bygone Days on the Bayou.”

Pilgrimage was first created in the spring of 1940 when the Jessie Allen Wise Garden Club hosted a three-day Dogwood Trail event to draw visitors to the area in an effort to promote East Texas and all her beauty.

Feedback from the first event showed visitors wanted a chance to see inside historic Jefferson’s old homes, so Pilgrimage was born.

For its 74th annual Pilgrimage event this year, Club volunteers are inviting guests to come celebrate historic Jefferson by taking a step back in time to the 1860s with a host of events and activities.

Proceeds from Pilgrimage go to support the historical properties owned by the Jessie Allen Wise Garden Club, a 501c3 non-profit.

Where: The Jefferson Playhouse, located at 1860 North Market Street in Jefferson

For more information or to purchase tickets, visit www.jeffersonpilgrimage.com