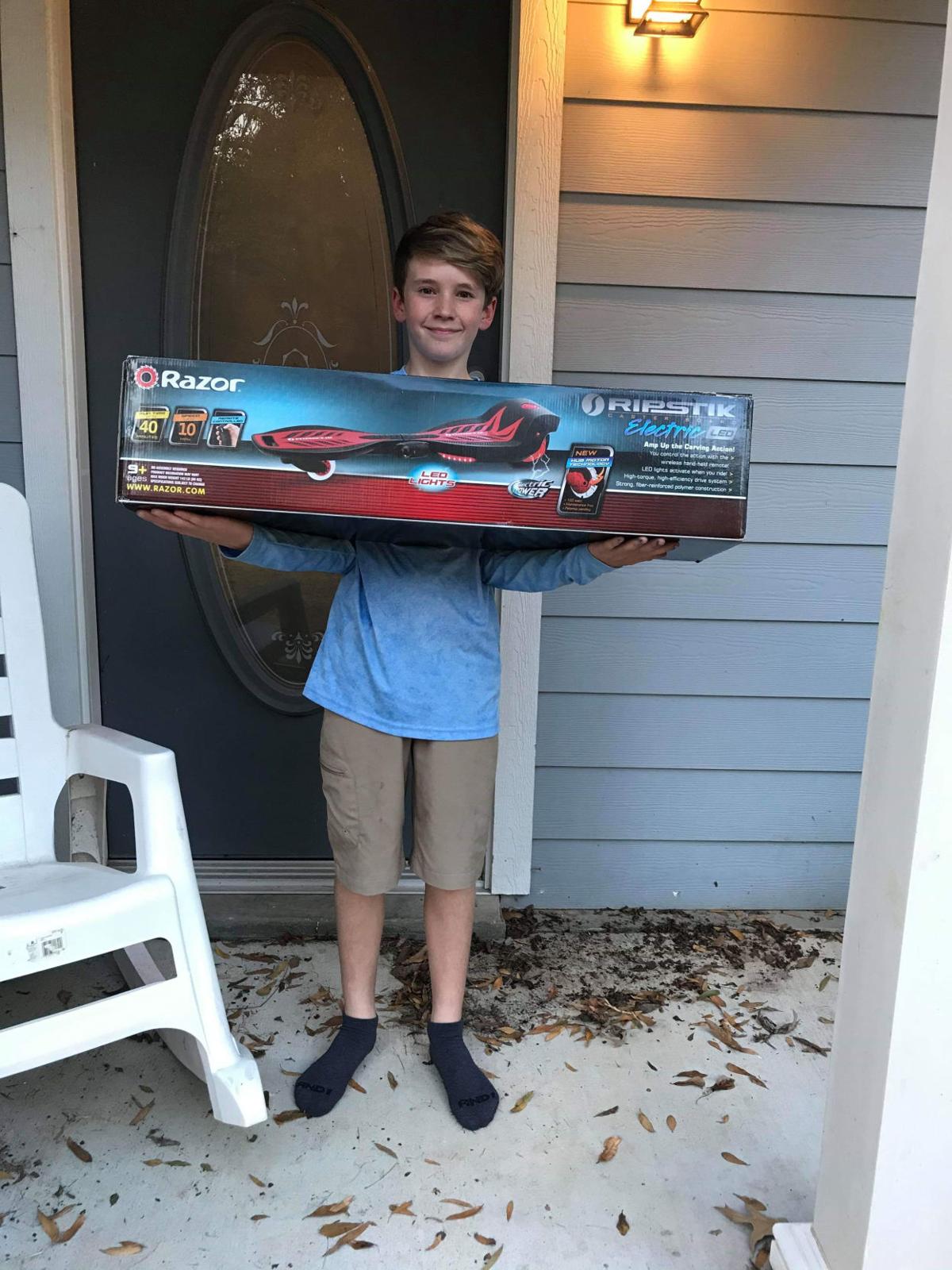 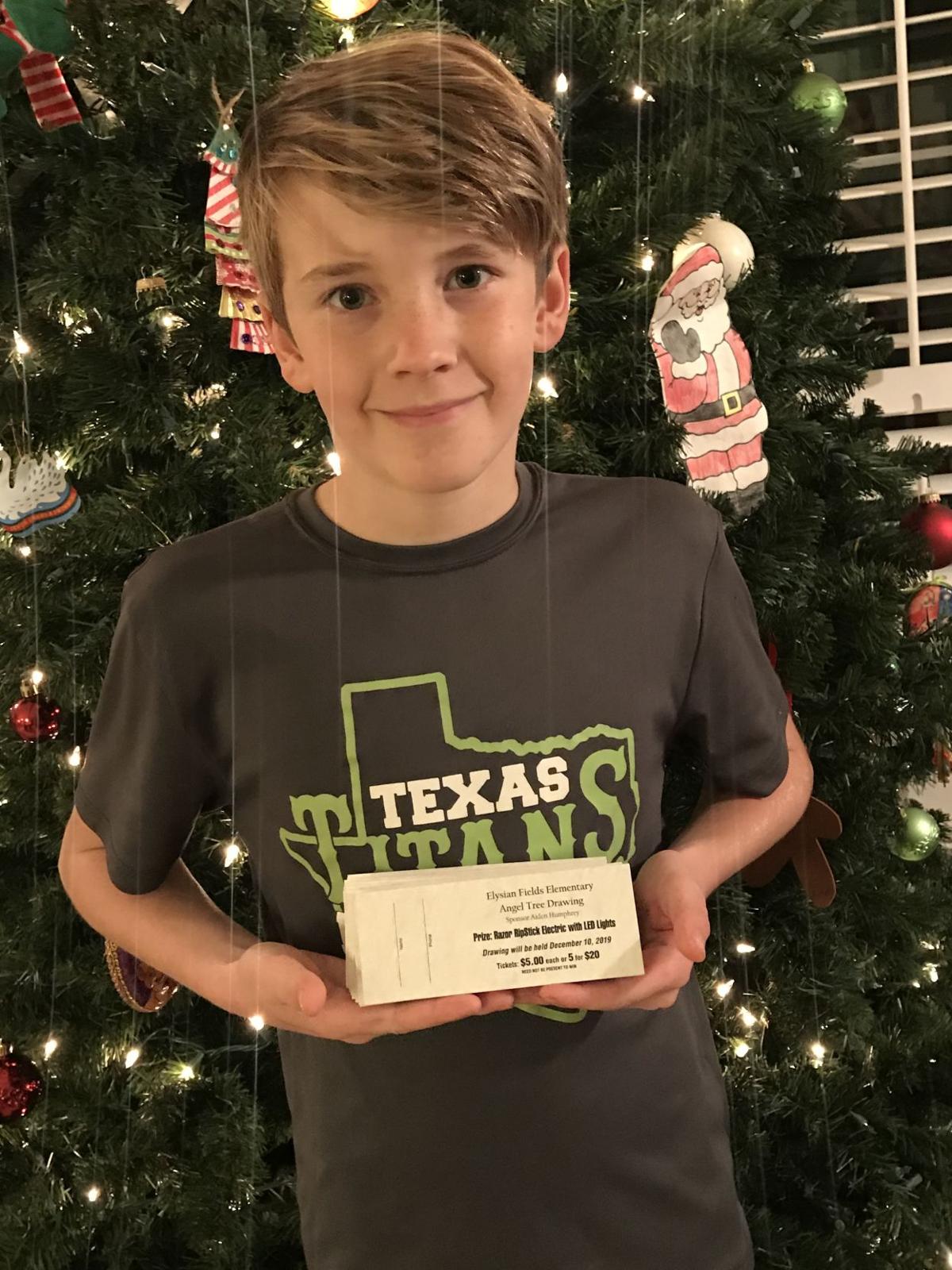 Elysian Fields ISD sixth grader Aiden Humphrey holds a raffle tickets to a Ripstik Ripster toy he is raffling to raise money to purchase Angel Tree presents for his fellow classmate for Christmas.

Elysian Fields ISD sixth grader Aiden Humphrey holds a raffle tickets to a Ripstik Ripster toy he is raffling to raise money to purchase Angel Tree presents for his fellow classmate for Christmas.

Elysian Fields Middle School sixth grader Aiden Humphrey found out the Elysian Fields Elementary School was preparing to participate in its annual Angel Tree, which helps out families and students in need across the community each Christmas.

When Aiden, who rode the bus one day after school to the elementary to see his Nana that works there, learned the school was again hosting its Angel Tree this holiday season, he decided he wanted to participate and help out a fourth grade student from the tree.

“Aiden doesn’t know the child, we just asked my mom to give us a child to sponsor (from the tree),” Aiden’s mother Nikki Cox said. “Aiden just wanted to sponsor a child because he said he could not imagine waking up Christmas morning and not having anything to open.”

Aiden himself had asked Santa Claus for the Ripstik Ripster Razor Scooter toy, but instead took his main gift from Santa and is now using it to raise money to purchase his fellow schoolmate presents.

Aiden is raffling his Ripstik Ripster toy and the money he raises from selling raffle tickets will be used to purchase presents for his schoolmate. In addition to the raffle, Aiden is working hard to do extra chores between now and Christmas so he can earn more money to purchase gifts for his Angel Tree recipient, and any other students in need.

Cox said she was surprised Aiden decided to give up his main gift for the cause but she wasn’t surprised by her son’s giving nature.

“I was surprised with the way he decided to raise the money by giving up his main gift but I was not surprised that he noticed someone in need and wanted to help,” she said. “He has always had a giving heart. When he was younger he would tell me that if he grew up to be rich that he was going to help all the homeless people around the world.”

Cox said she’s been impressed by her son’s dedication to his mission.

“He has been taking out the trash, doing dishes, feeding the dogs and helping with laundry,” she said of his extra chores. “It makes me so proud and brings tears to my eyes. I think children have forgotten the meaning of Christmas and I am getting to witness God working through my son. I hope that he can encourage other children his age to do something to help others this holiday season.”

So far, Aiden has raised about $700 to purchase gifts for his Angel Tree recipient and any extra money raised will go to helping other children on the Angel Tree.

Those wishing to help Aiden raise money for Angel Tree presents can purchase a raffle ticket for $5 each or five tickets for $20 through Elysian Fields Elementary School, or via Paypal or Venmo through Nikki Cox. Donations are also welcome. The raffle will be held live on Cox’s Facebook page on Dec. 10 and the winner contacted.