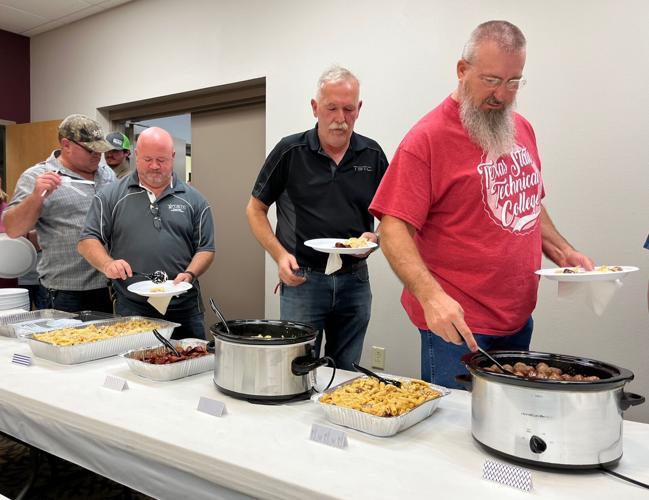 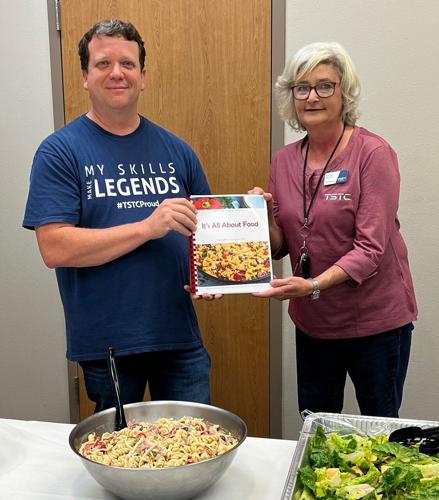 Some Texas State Technical College faculty and staff members gathered last week at the Marshall campus to commemorate the release of its first campus cookbook.

“It’s All About Food: First Edition — Summer 2022” was developed by TSTC faculty members Brenda Murrell and Josh Stampley, both of the Drafting and Design program.

On Friday, members of the campus community made some of the cookbook’s recipes for a potluck lunch. Some of the dishes included Banana Pudding, Doritos Salad, Enchilada Casserole and Pumpkin Cheesecake Swirl Bars.

“I am proud to know we have so many talented cooks on campus who are willing to share their recipes with us,” said Barton Day, provost of TSTC’s Marshall campus.

Hannah Luce, director of planning and special events for TSTC’s Career Services office, made Crockpot Buffalo Wild Wings Pasta for the luncheon. She said the recipe is one she originally found on the internet and added her special touches to.

“It’s a family favorite at my house,” Luce said.

Cody Sutton, a campus dual enrollment representative, contributed three recipes to the cookbook: Cajun Chicken Pasta, Chocolate Pie and Peanut Butter Balls. He said the desserts are family recipes and he developed the pasta recipe himself.

“It was very filling,” Sutton said about the luncheon. “I liked the beans. The peach cobbler was excellent.”

Stampley said the cookbook came about after a discussion earlier this year with Murrell about cooking and recipes.

“We thought it would bring up morale for the campus,” said Murrell, an instructor in the Drafting and Design program.

Murrell said about 50 recipes were contributed from TSTC staff and faculty members. Murrell and Stampley formatted, printed and bound the cookbooks.

This is the first cookbook for the campus, but it will not be the last.

“It’s going to be even bigger for the second one,” said Stampley, statewide chair for TSTC’s Drafting and Design department.

For more information about TSTC, go to tstc.edu.