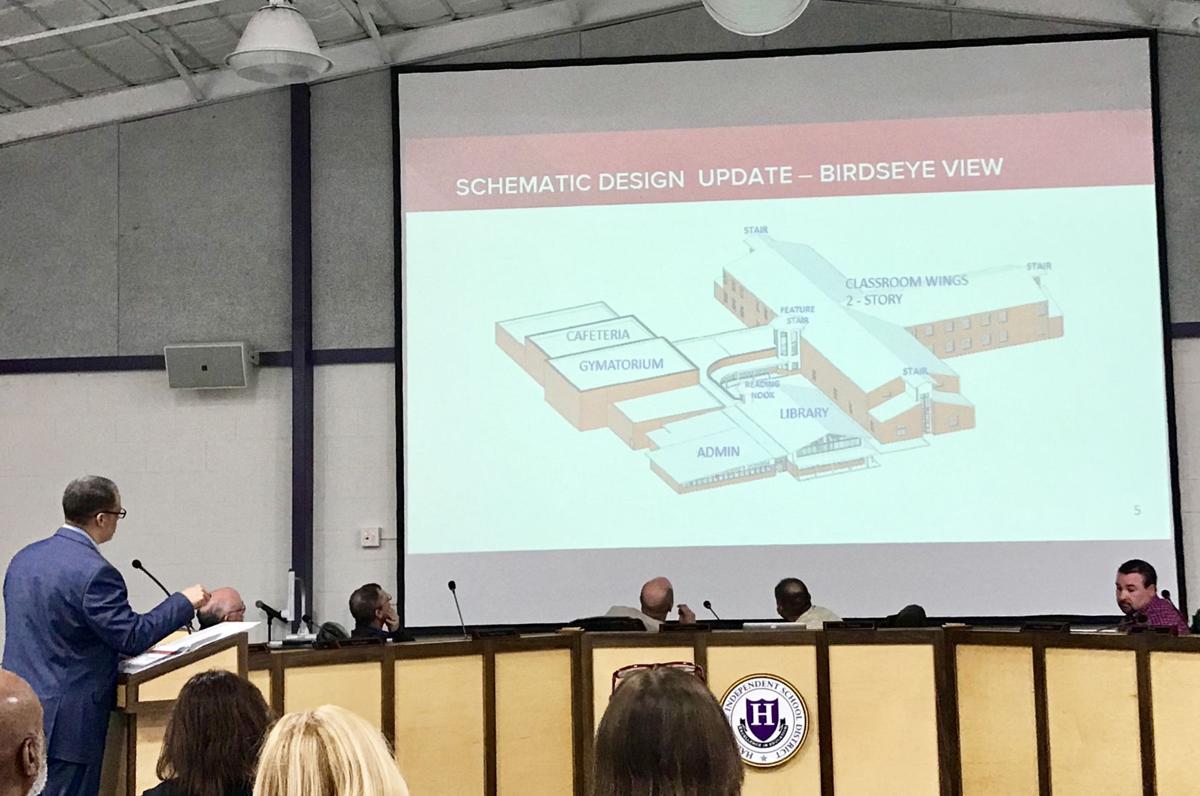 Hallsville ISD trustees on Tuesday approved an architectural draft for the district’s new West Elementary School that will be constructed as part of the 2019 bond. 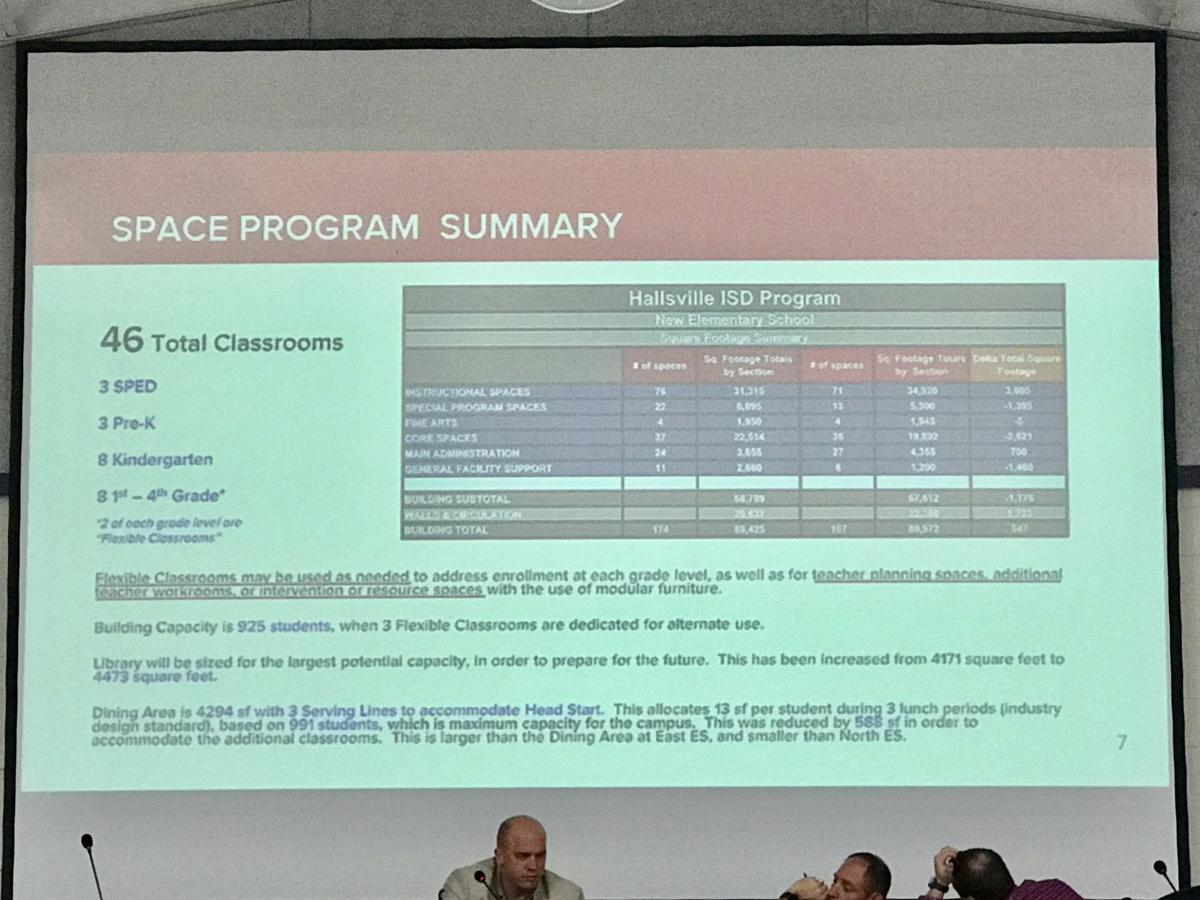 Hallsville ISD trustees on Tuesday approved an architectural draft for the district's new West Elementary School that will be constructed as part of the 2019 bond.

Hallsville ISD trustees on Tuesday approved an architectural draft for the district’s new West Elementary School that will be constructed as part of the 2019 bond.

Hallsville ISD trustees on Tuesday approved an architectural draft for the district's new West Elementary School that will be constructed as part of the 2019 bond.

HALLSVILLE — Hallsville ISD trustees on Tuesday approved an architectural draft of the district’s soon to be new West Elementary School that will be constructed as part of the 2019 bond.

Trustees heard a presentation from architect Huckabee & Associates Representative Andre Brackens about the architectural draft of the new, 89,000 sq. ft. West Elementary School approved for construction by voters as part of the $55 million bond project.

“We have, coming before spring break, we have what’s called the geo-technical review conference and that’s is the conference we have to go over the findings of the site work, site testing and soil testing report. That report has been finalized,” Brackens said.

The new elementary school will be located inside the Longview area of Harrison County off of Page Rd and Loop 281.

“That meeting, that review conference will go over all of those recommendations, what was found in the soil and discuss the foundation — so that’s coming up. Our stake holder meeting for West Elementary, and stake holders are you teachers and principals and groups that have been meeting during the charette process to get their input, where we basically take all of their comments and present where we’ve landed on those comments and get additional input. We’ll also have the stakeholder meeting with the principals for your Hallsville High School auditorium and Hallsville Junior High projects. So that’s what’s coming.”

Brackens then showed the board an architectural rendering of the new school from a bird’s eye view.

The new two-story school, which will house grades pre-kindergarten through fourth grade, will also include separate playgrounds for the pre-k and older students and will include an outdoor courtyard area in the center of the building.

The school will have a capacity to house 925 students but is currently planned to house about 750 upon opening. The building will consist of 46 total classrooms, including three special education areas, three pre-kindergarten areas, eight kindergarten areas, and eight each first through fourth grade areas.

Two of the eight classrooms for each grade level are designated as “flexible classrooms,” meaning they can be used and wired as computer labs, intervention rooms, teacher planning areas, teacher workrooms or overflow classrooms, though Hallsville ISD Superintendent Jeff Collum expressed a need to have them labeled as intervention areas.

The school’s library, which is centrally located within the building, has been increased from 4,171 sq. ft. to 4,473 sq. ft., according to the draft presented on Tuesday.

The cafeteria is currently set for about 4,294 sq. ft. and can serve three serving lines, though Collum and the trustees expressed an interest to Brackens to have the draft altered to increase the dining area to allow for four serving lines as is currently used at the two other elementary schools in the district.

“There will also be a meeting with the city of Longview to review the report from the Traffic Impact Analysis (TIA),” Brackens said.

Hallsville ISD voters approved the $55 million bond in November, a project that includes the construction of the new West Elementary School, updates to the junior high campus and a new auditorium at the high school.

Hallsville ISD is currently in a unique financial position that allowed voters and tax payers to approve the bond without a tax increase thanks to an influx of state funding to school districts as part of the recently passed Texas House Bill 3.

The total bond amount will not exceed $55 million, and includes about $29.7 million for a new “West” elementary school campus on land the district already owns near Page Road and Loop 281 in the Longview city limits but Hallsville ISD district.

The bond also includes about $13.8 million for a new 1,000 seat high school auditorium that was originally included on the plans of the district’s 2007 bond that constructed the new Hallsville High School but was later scrapped due to a lack of money remaining. The district’s campuses currently use the auditorium at Hallsville Junior High School.

Earlier this fall, trustees approved spending about $2.6 million of the district’s general fund monies to update the turf and track at Bobcat Stadium, as well as to add turf at the baseball/softball complex.

On Tuesday, Assistant Superintendent John Martin said the bids for the turf work had been received and the district was recommending Paragon Sports Constructors LLC for all three at a cost of about $2.7 million.

The tentative timeline is to update the football field turf immediately following graduation with the other two turf projects to follow.

Trustees on Tuesday also approved Hallsville High School Principal Lindsay Slaten to kick off a new fundraiser for the school which would allow incoming seniors to purchase and decorate a parking spot to use their senior year, provided they have the required credits and are not truant and don’t have excessive tardies.