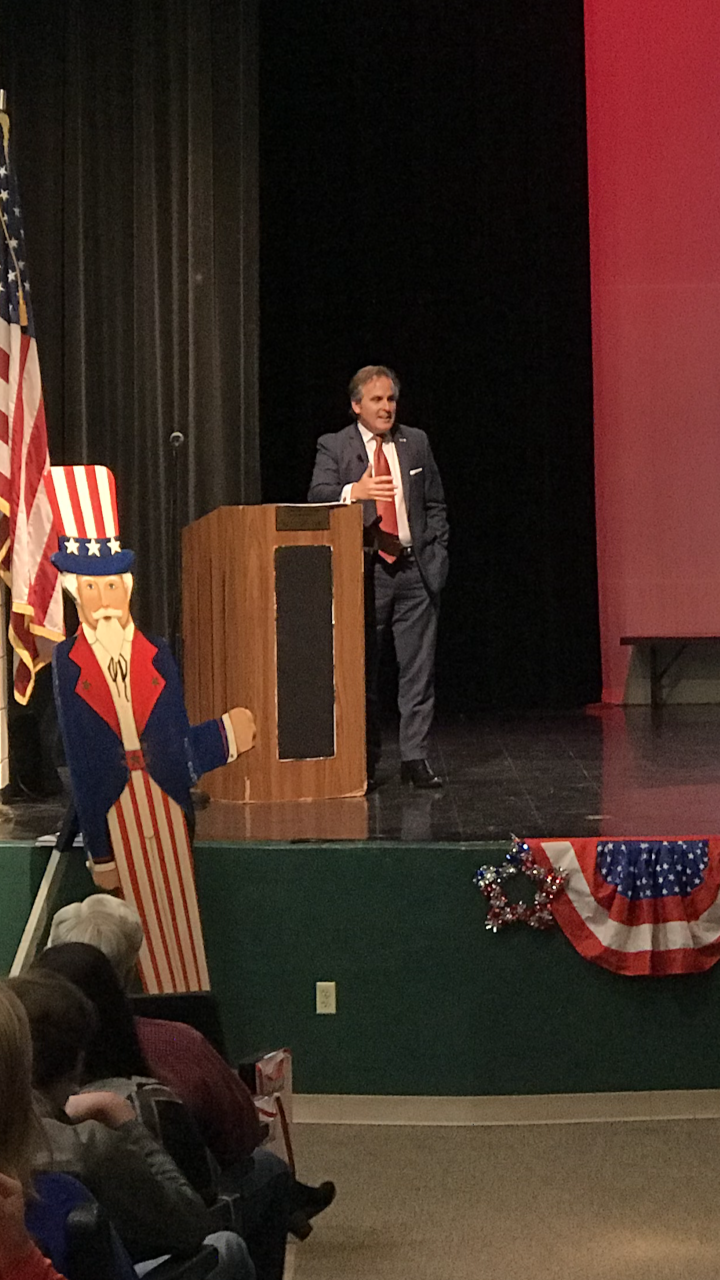 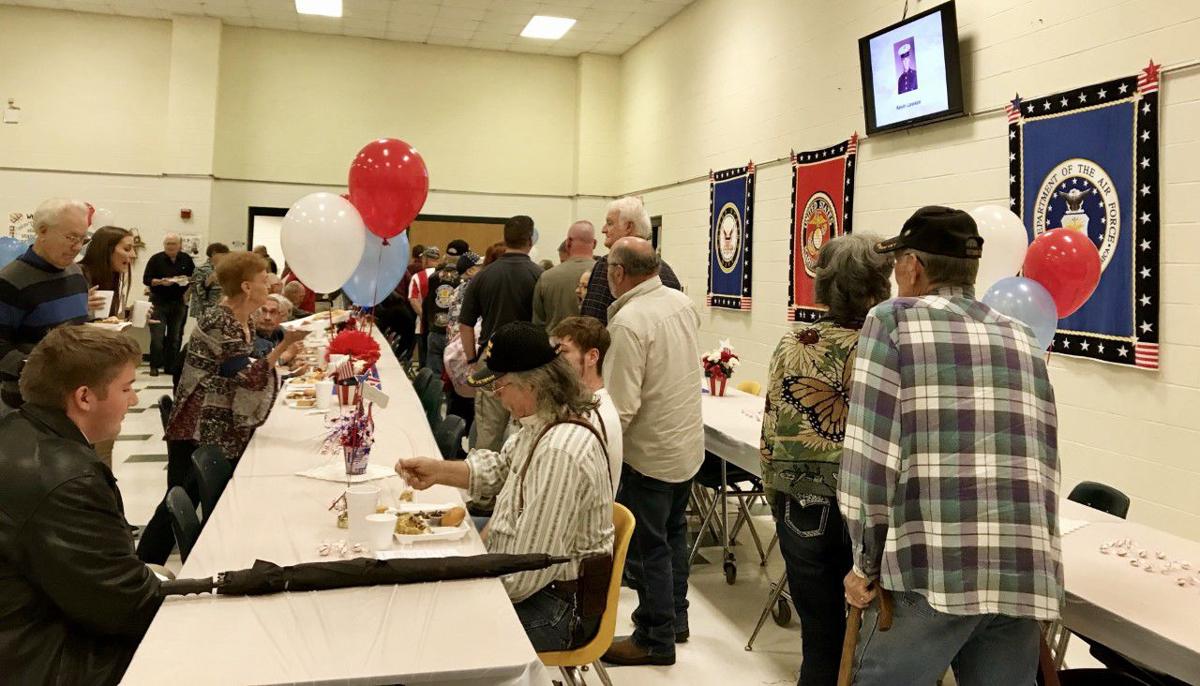 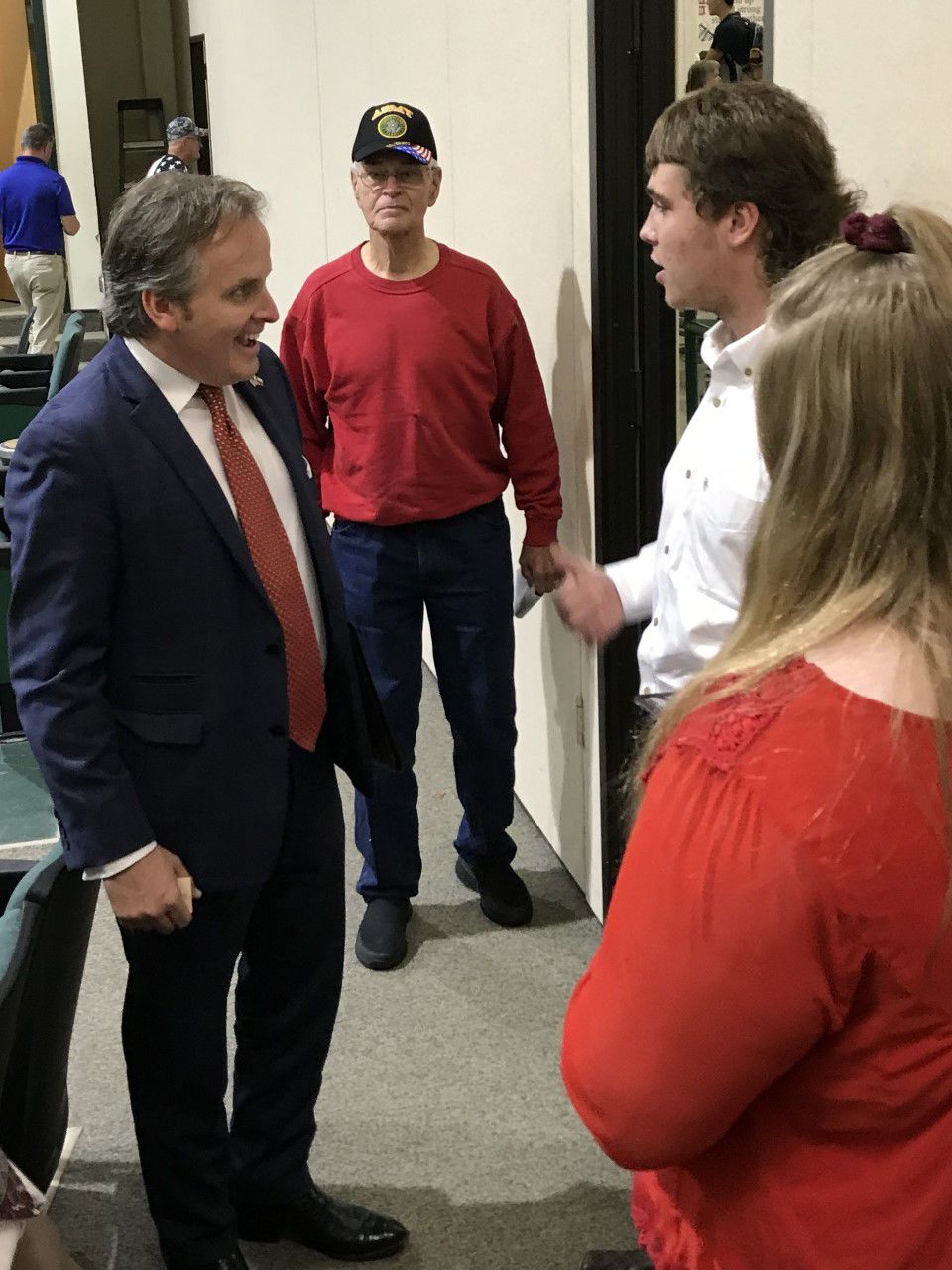 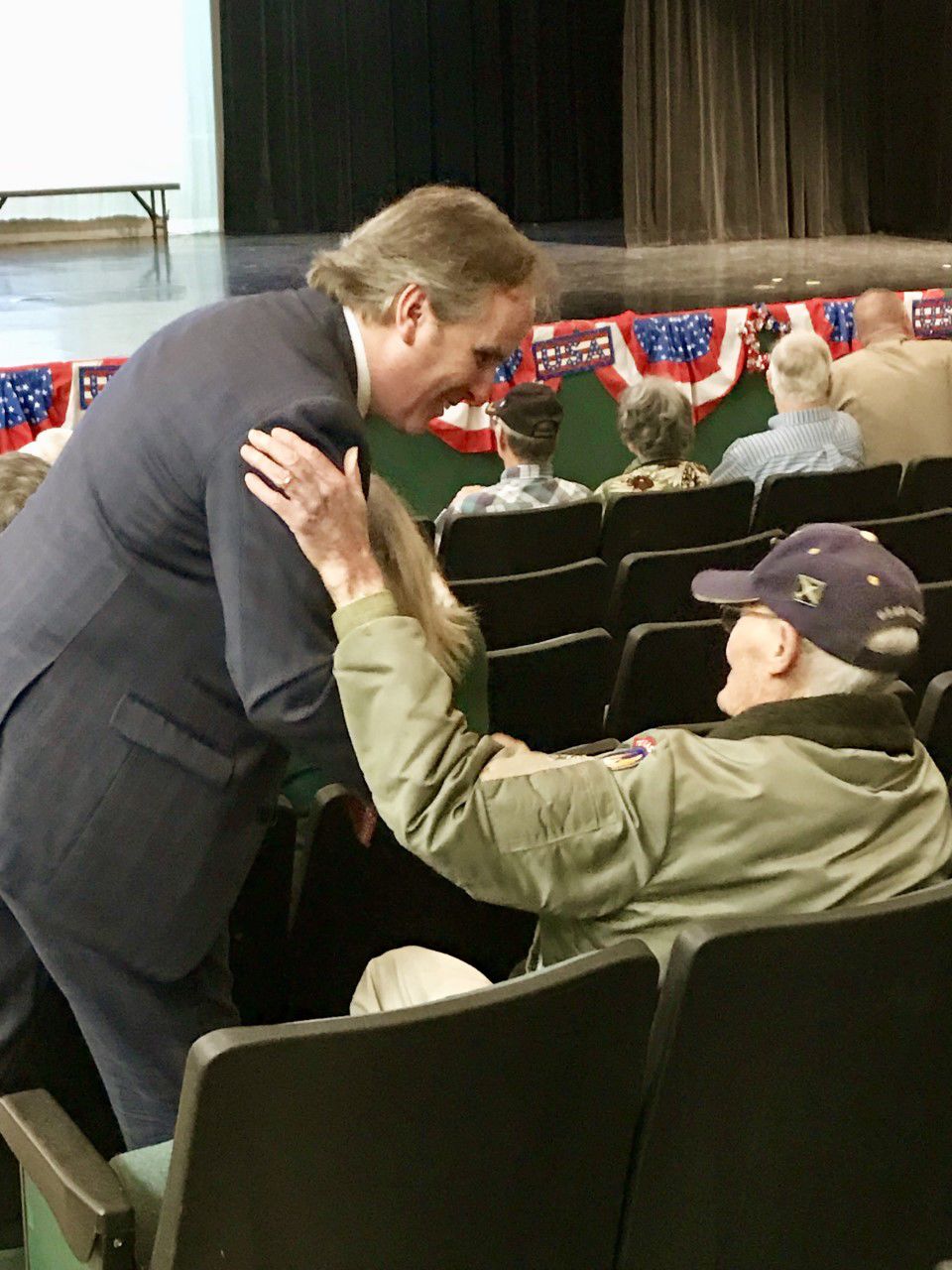 Texas State Senator Bryan Hughes speaks with a veteran on Thursday during the Veterans Day program. 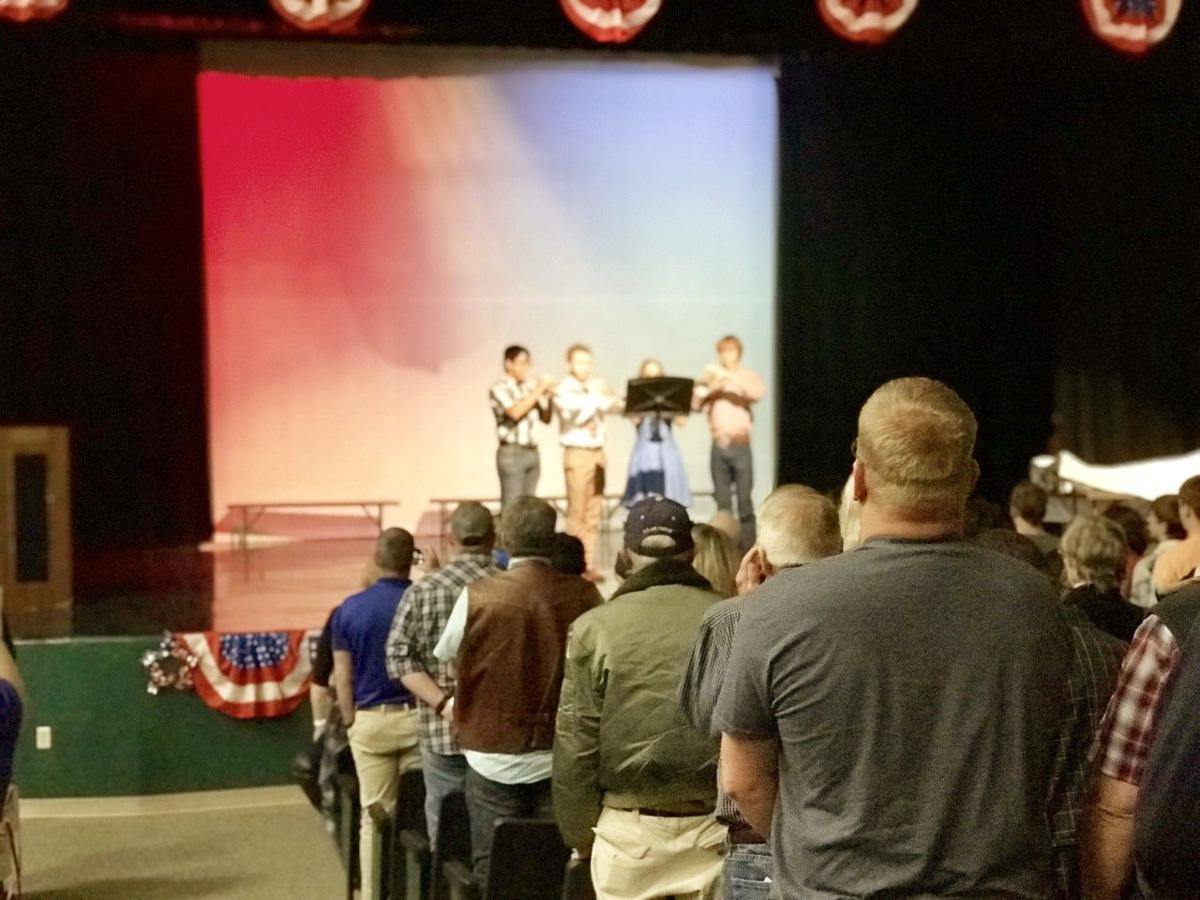 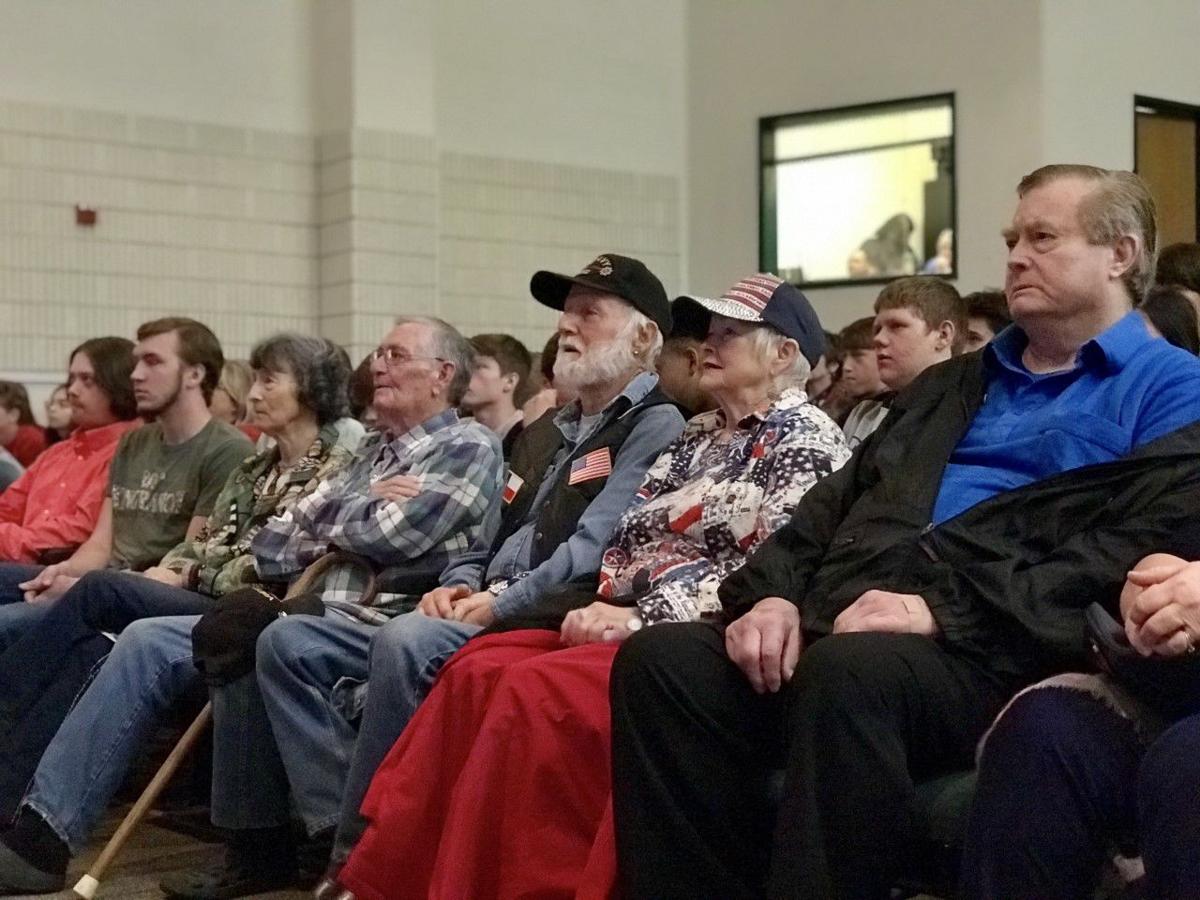 Veterans are honored during the Veterans Day program on Thursday at Harleton High School. 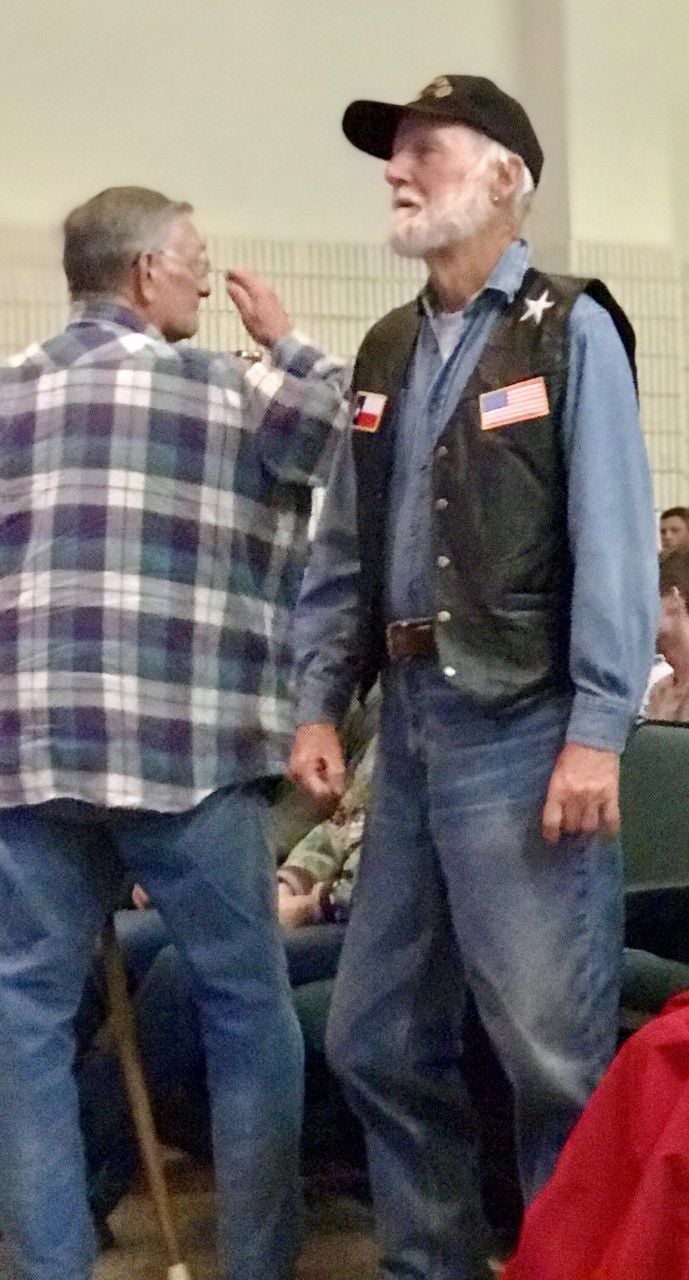 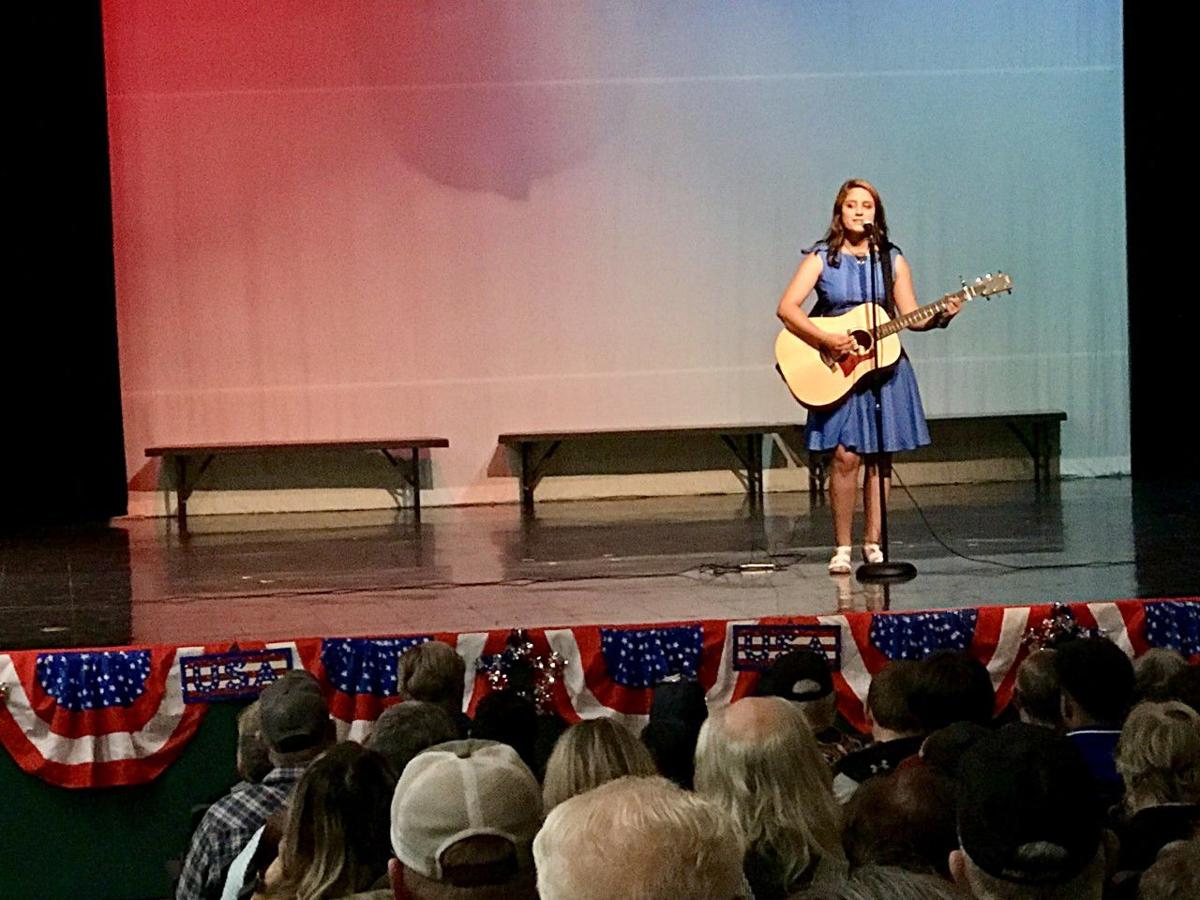 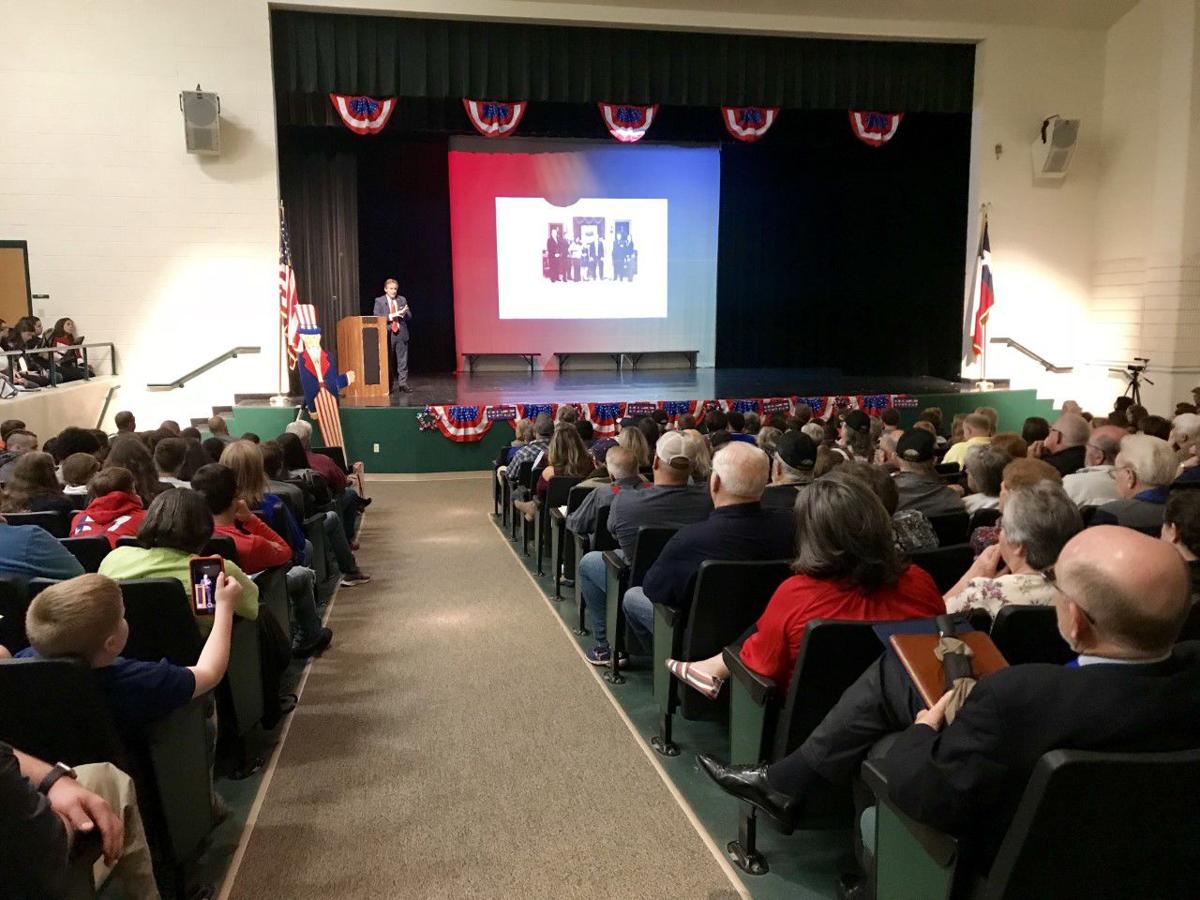 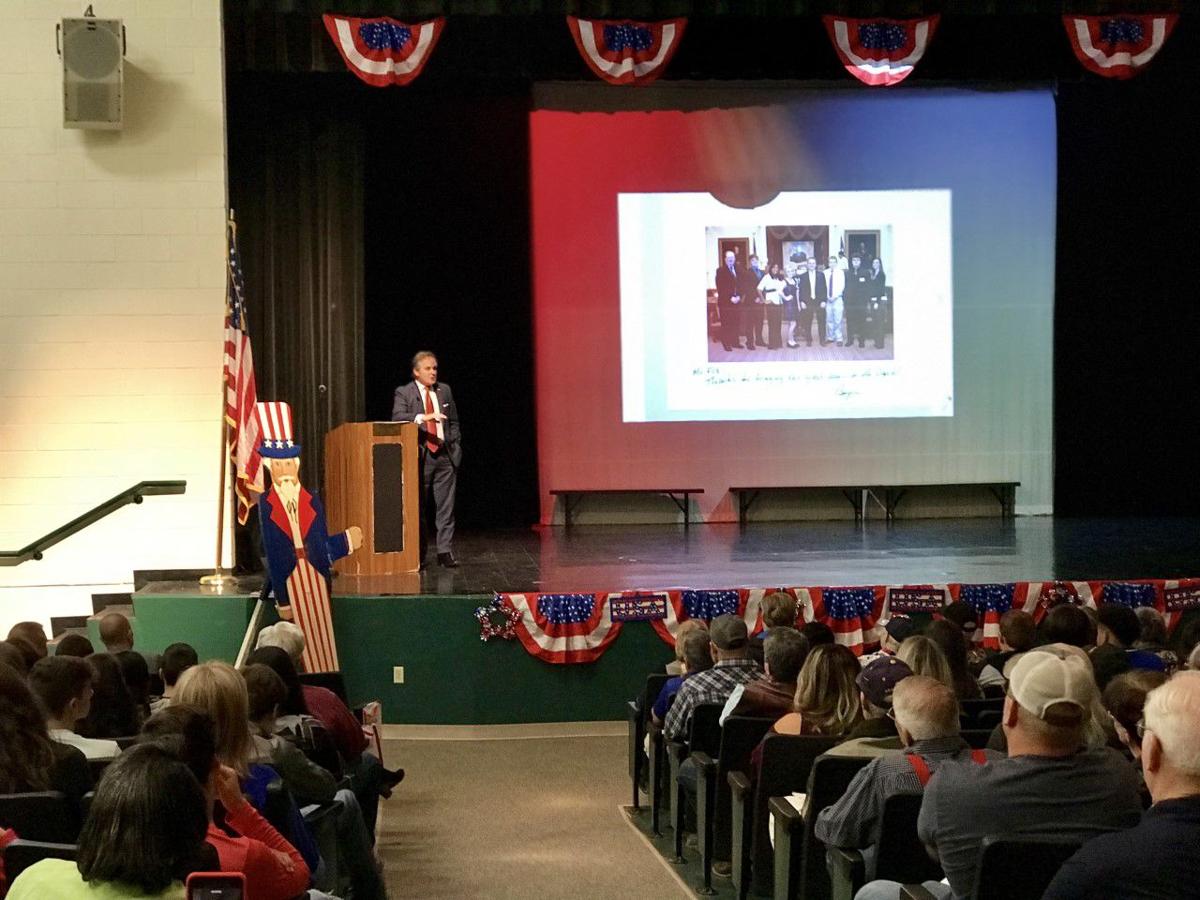 Texas State Senator Bryan Hughes speaks with a veteran on Thursday during the Veterans Day program.

Veterans are honored during the Veterans Day program on Thursday at Harleton High School.

Texas State Senator Bryan Hughes stopped by to speak to the students about life, liberty and the freedoms the students enjoy as Americans, thanks to the sacrifice made by our U.S. Armed Forces veterans.

The veterans present were also recognized for their service by their military branch, during the Armed Forces Salute, before Harleton High School band members played Taps on their trumpets in honor of all military veterans who have died or been killed.

Following the program, the veterans and their family members were asked to stay for a reception and lunch in the school's cafeteria.

"Life, liberty, freedom of religion, free speech, free markets, the right to bear arms and defend yourself, these are all things you are so blessed as Americans to have, thanks to the sacrifice of veterans," Hughes said on Thursday. "These are all things that were always a given in our country but they are under attack like never before. America is the land of opportunity and if we work hard and trust in the Lord, we can have a good life, and that is all due to these veterans sitting here among us today."

Hughes encouraged the students on Thursday in Harleton to cherish the rights given to them from their creator, not the government.

"In our Declaration of Independence, our founders wrote and believed that these rights came from God, our Creator, not from the government," Hughes said.

Hughes cautioned the students to hold firm to the values that made America the most free country on the globe on Thursday.

"Today, even in Canada, people are being jailed for their speech, America is the only country left that has free speech and it's under attack. Free speech means that someone can say something I disagree with and I can tell them why I disagree and we have a debate, hash things out."

Hughes said Americans also celebrate freedom of religion, where in other countries, Christians, Muslims, Hindu and other faiths are being persecuted in their homelands for serving their own deity.

"We also have the right to defend ourselves, keep and bear arms and it's under attack in this country like never before," he said. "We also have the free market system, capitalism. They say most college students today think socialism is a good idea. Capitalism means even the poorest among us can  have an idea for business or service that people will buy and you can make money. Socialism and communism leads to fewer jobs and fewer opportunities while the free market system does the most good for the most people."

Veterans Day, which is Monday, is observed every Nov. 11 to honor and recognize military veterans for their service in the U.S. Armed Forces.

Sam Houston Elementary School is set to host a Veterans Day program at 2 p.m. on Friday at the school, located at 2905 East Travis Street in Marshall.

Veterans from the community are invited to come early for light refreshments and to visit with each other before the program.

The program’s guest speaker will be Hallsville ISD parent and U.S. military veteran Chris Comer. If weather permits, there will be a parade down Bobcat Lane outside the school immediately following the program.

Jefferson High School will host its annual Veterans Day program beginning with a reception from 2:15 to 2:45 p.m. on Nov. 14 at the high school’s Commons Area. During the reception, veterans and their spouses will be served food by the high school’s Culinary Arts students.

All community veterans and their spouses are invited to attend for free. Veterans are asked to RSVP by Tuesday by calling Tracey Powell at the high school so the Culinary Arts students can plan for the number of guests.

Immediately following the reception, the group will move to the high school gym at 2:50 p.m. for a Veterans Day assembly which will run through 3:15 p.m.

Waskom High School is set to host its Veterans Day program at 9 a.m. Monday in the high school gym, located at 980 School Ave. in Waskom.

The program will feature guest speaker Michael Welch, who serves as the special education teacher and coach.