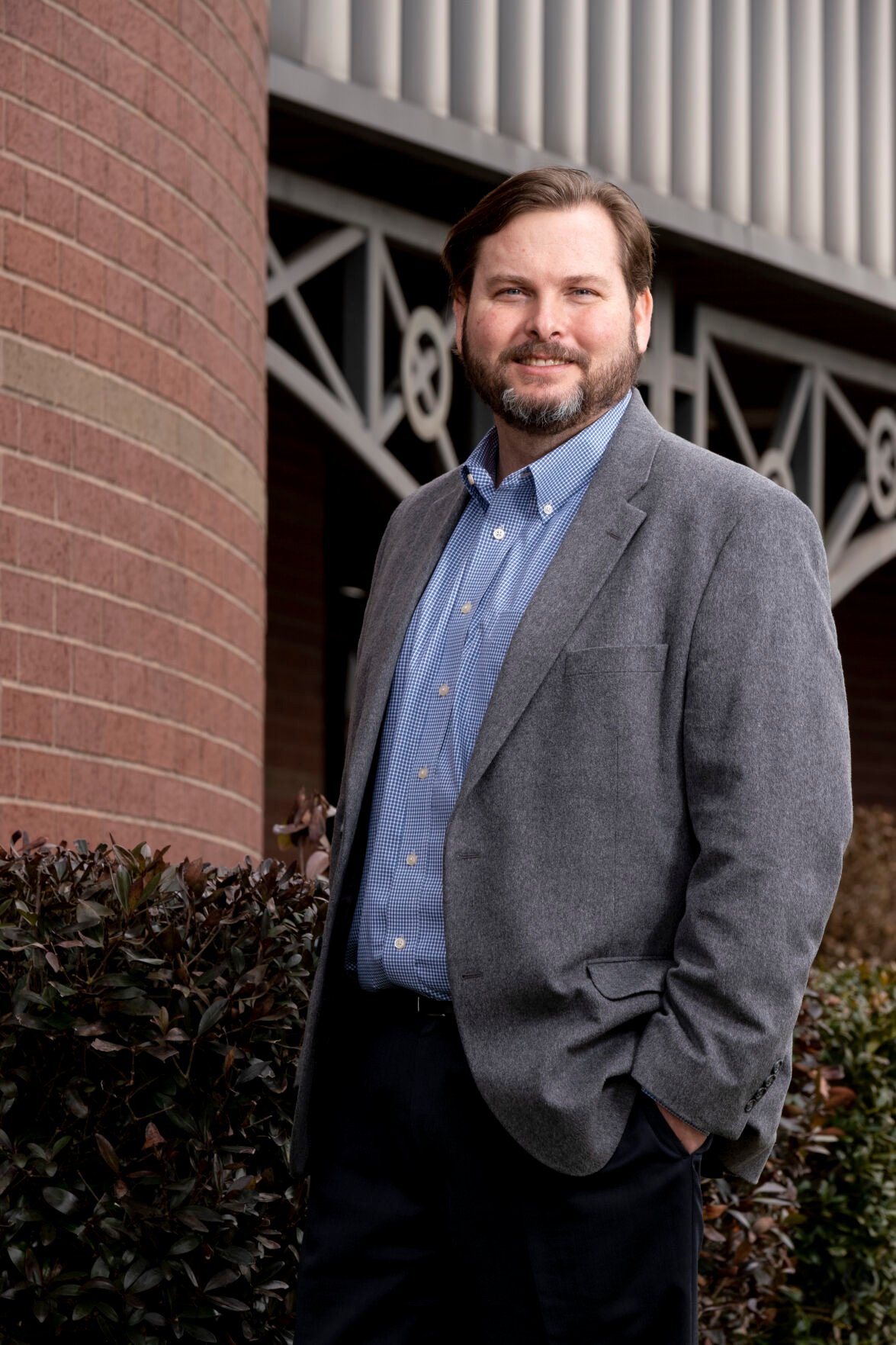 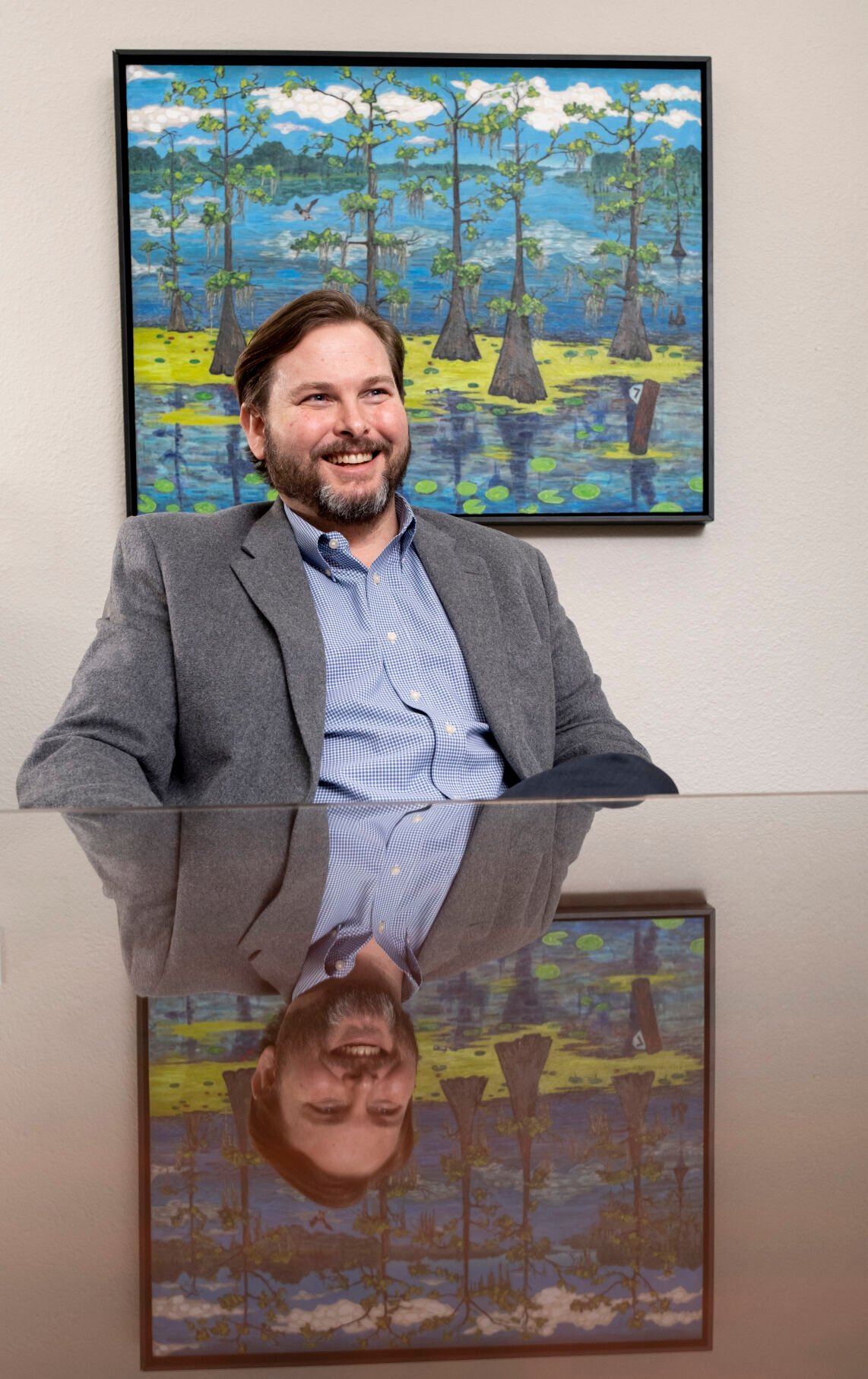 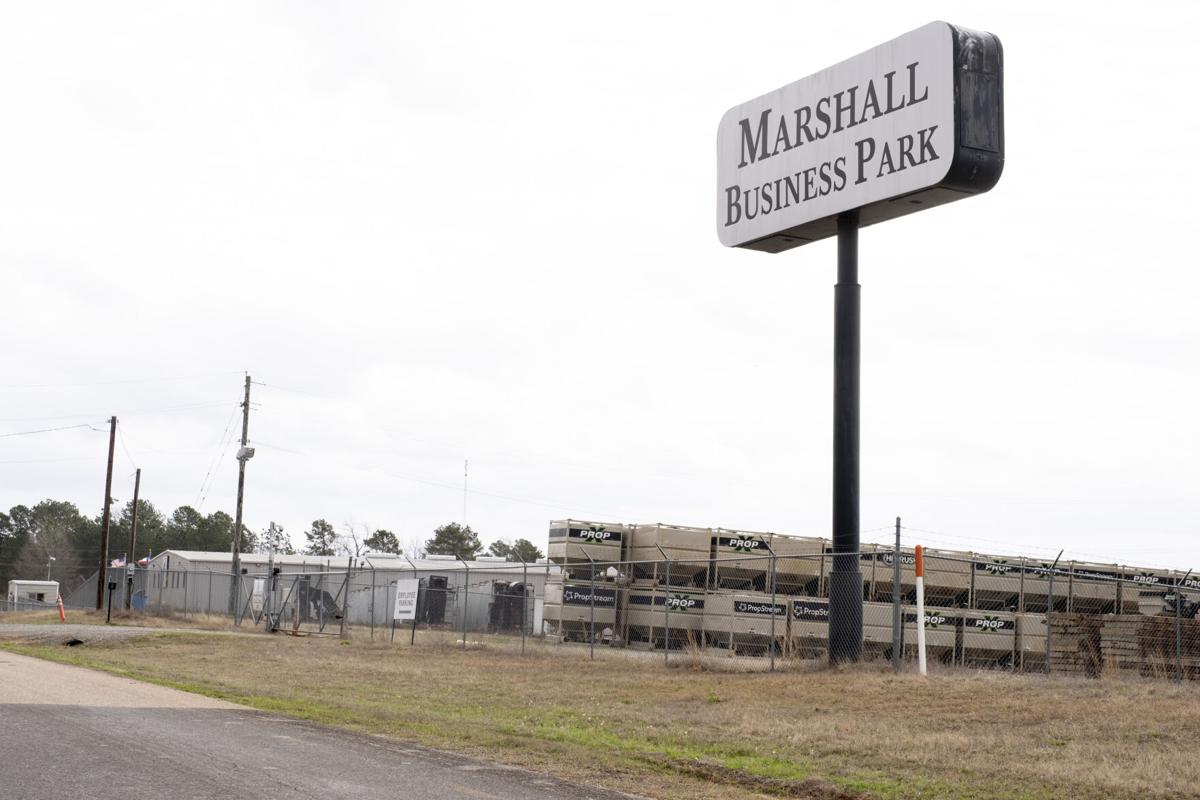 The Marshall Business Park is one element of MEDCO. 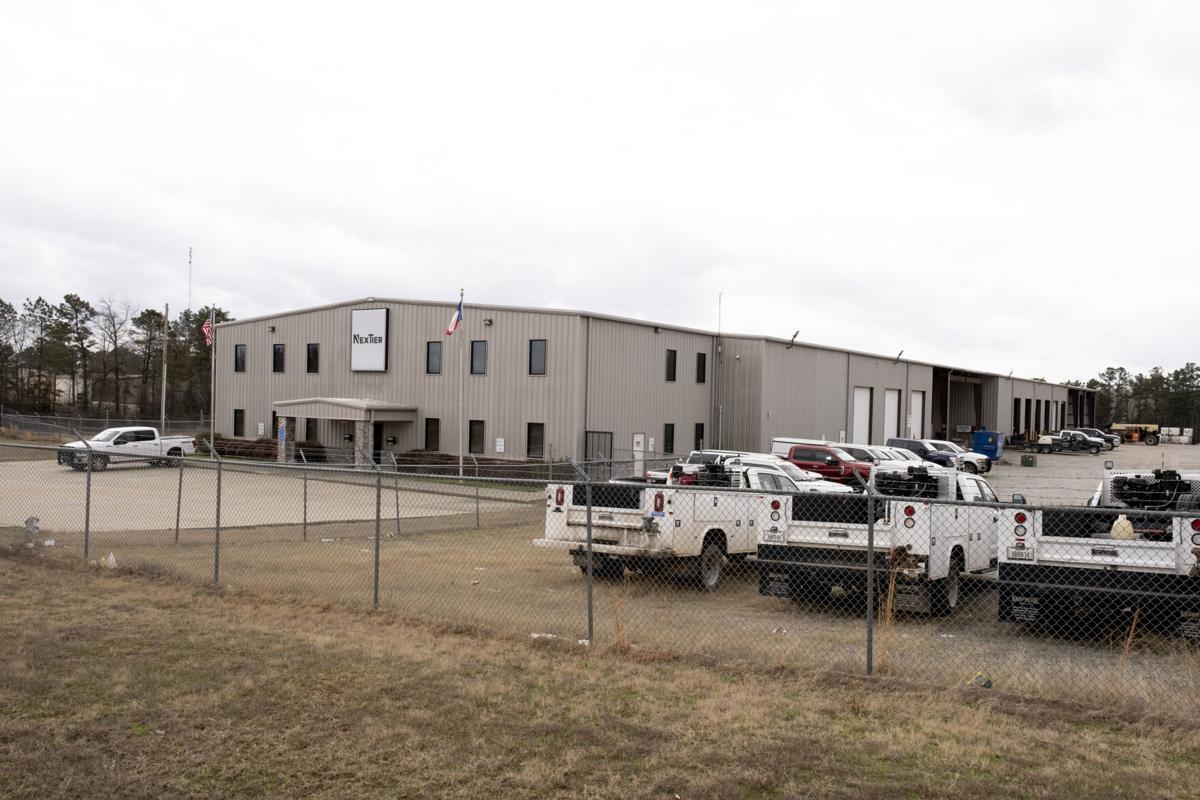 NexTier is one of the businesses in the Marshall Business Park. 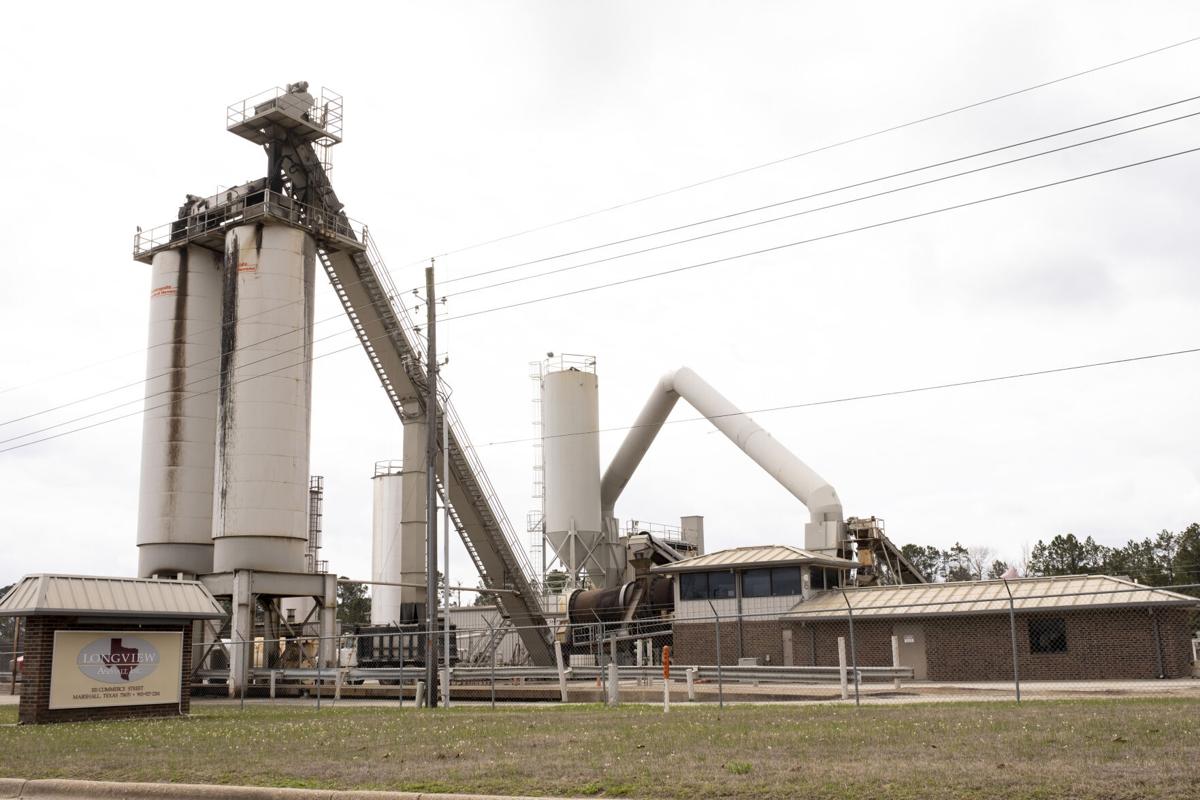 Longview Asphault is located in the Marshall Business Park. 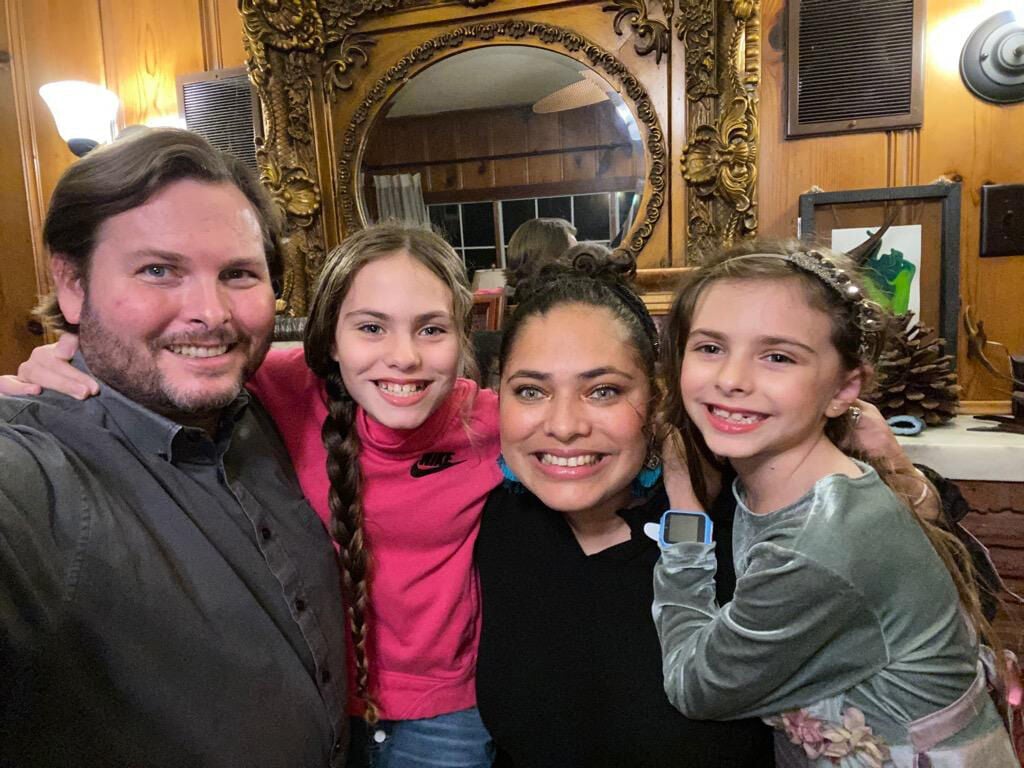 Rush Harris with his wife Dinora, and their daughters Gabriela and Grace.

The Marshall Business Park is one element of MEDCO.

NexTier is one of the businesses in the Marshall Business Park.

Longview Asphault is located in the Marshall Business Park.

Rush Harris with his wife Dinora, and their daughters Gabriela and Grace.

When Rush Harris looks at his hometown of Marshall, he sees a city that is growing and thriving. He sees community leaders who are dedicated to improving the community so that residents have a better quality of life with an abundance of job opportunities.

He sees a city striving to stay on the cutting edge of technology and infrastructure to attract more business opportunities and educational systems dedicated to educating young students so they may become the business leaders of tomorrow.

"To be successful, you need people who are working together and who are having conversations with each other. That's the way I see our leadership and our city progressing," Harris said. "It's one of the things that gives me hope about Marshall. You have people here who are talking to each other and working toward a common goal. It makes me excited about city."

A Marshall native, Harris now serves as the executive director of the Marshall Economic Development Corporation (MEDCO). He was appointed to the position in October after serving with the company for nearly six years total including from 2011-13 and then again from 2016 onward.

Harris has many goals, including developing more potential business sites, for MEDCO as he plays his part in helping the city grow. With family and friends in Marshall, Harris has a vested interest in seeing his hometown succeed.

But his interest in business development started many years prior to him returning to his hometown.

After graduating in 1995 from Marshall High School, Harris went on to pursue a bachelor's degree at Southern Methodist University in Dallas. At SMU, he obtained his degree in business administration but he felt like something was missing.

"I wanted to experience something more international," he recalled.

From 2002 to 2004, Harris volunteered with the U.S. Peace Corps in an agricultural marketing program in Guatemala. In Guatemala, not only did Harris gain life-changing experiences, he also met his wife, Dinora.

"My time in the Peace Corps helped me understand who I was as a person and what my goals were as an individual," Harris said.

In Guatemala, the nearest person to Harris who spoke English lived three hours away. So, he learned Spanish and became rooted in the culture. He also lived on a small stipend that he used for things like paying rent and buying groceries. He'd go to one "tienda" (Spanish for "shop") to buy meat, a different one to buy vegetables, another for fruits, etc.

"It was a different way of life, but every day I loved what I did," he said. "Every day was different. That's something I can relate my current position because every day is different; you never know what project's going to come up and you wear a multitude of hats."

In Guatemala, the group of farmers with whom Harris worked took products like limes or lemons and dehydrated them to make secondary products, similar to a fruit-flavored Nestea.

"We made a hot tea that was made really all out of a dehydrated lemon rind," he recalled.

They took the products to a trade show in Guatemala City, which was two to three hours from the town in which Harris lived. One week, as he was helping set up the booth, he noticed a booth for the Department of Agriculture of Guatemala. In fractured Spanish, he asked the woman working the booth if the department had programs for which farmers could apply. She explained that they did and gave him a pamphlet. He asked for contact information to contact her in the future.

That woman, Dinora, would later become Harris' wife. The two met at the trade show and began dating while he was in Guatemala. The city in which her mother lived was the same town Harris traveled to nearly every week to buy groceries and use the internet.

"She didn't speak English at the time, so we dated in Spanish. I found that when you are dating in a language that you only speak marginally, you say exactly what you mean," he said. "So she got to hear exactly what I meant to say."

The two dated for about a year and a half. She came with him to visit his family in Marshall for Christmas just after he ended his term with the Peace Corps. She came back to visit that spring at Easter, and he proposed. They married a month later, in 2005, and now have two daughters, 11-year-old Gabriela and 8-year-old Grace.

After returning to Marshall, Harris worked in the oil and gas industry for a few years before enrolling at Thunderbird School of Global Management in Glendale, Arizona, where he earned his master of business administration.

In 2009, after graduating, he considered an international opportunity to work in Beijing, China, but chose to stay in East Texas. His wife was pregnant with their first daughter at the time. He briefly held a job in Shreveport before landing at MEDCO in 2011. He worked with MEDCO for a couple of years before leaving for another job opportunity, but he quickly returned to MEDCO in 2016 and has remained there ever since.

Prior to being named MEDCO's executive director in 2020, Harris served as the director of business services. In that position, he primarily focused on property development and management. The MEDCO owns many properties, including in the city's business parks. Harris' job included maintenance tasks, development tasks and developing site-ready paths at the properties. Being site-ready means a property has the assets, including water, sewer, electric, natural gas, broadband capability and other types of infrastructure, which a company needs to move in and start building.

In 2020, when former Executive Director Donna Maisel announced her retirement, Harris was promoted to the position. Maisel had hired Harris years before and had helped train and groom him for the role. As the executive director, Harris works closely with community stakeholders to promote business and economic development interests. He seeks investors for the city's properties, promoting Marshall's many valuable assets and helps businesses see what the community can offer to them.

Harris believes having a workforce training program to help students transition to the workforce is critical to any community. Potential businesses want to know that a community has a workforce it can employ. In Marshall, the community has four institutions of higher learning, East Texas Baptist University, Texas State Technical College, Wiley College and a branch of Panola College. In addition to that, Harris said a workforce training program is helping education public school students about opportunities to help streamline their path from school to higher education to the workforce.

"Education and infrastructure are the two key components to success and you constantly have to ask yourself, 'What are you doing to improve in those two areas?'" he said.

Recent "wins" for MEDCO have included a Dirt Cheap warehouse that is creating 500 new jobs and a $2 million capital investment from parent company Channel Control Merchants. Dirt Cheap will lease about 325,000 square feet of space on Brown Road as a warehouse to serve the store's retail outlets in Texas, Western Louisiana and Southern Arkansas. A retail outlet will also be on the premises.

Harris said he'd like to see the Marshall Economic Development Corp. continue to develop more potential sites for businesses in Marshall and continue to improve the city's infrastructure, particularly with regard to fiber.

As rural communities strive to bridge the digital divide, Marshall is working with Connected Nations Texas, an organization striving to bring broadband (high-speed internet) to communities. The Harrison County Broadband Committee is working now to develop a countywide Technology Action Plan. Harris said broadband access is not only important for residents, it's also critical to the business community. Many businesses are looking for broadband, among other infrastructure needs. As the city continues to push into the future, Harris said he believes improved broadband access will help contribute to business growth and satisfaction, not only in Marshall but in all of Harrison County.

"At MEDCO, we're not educators but we are facilitators and we can try to combat business demand and employment demand with what’s being taught," he said.

That means making students aware of job opportunities and the pathways they need to get there. Harris noted that many industries hire people from a variety of fields from clerical courses that could be taken at a community college to technical workers on the ground with skills developed from TSTC and even managers who may have received a degree from a four-year institution like ETBU.

"We have a great pipeline from our schools to offer a range of occupations involved in industry," Harris said.

Not only can the residents and potential workforce be a potential benefit to industries, those industries can be a positive driver for the community. Job opportunities, Harris said, play a key role in people's lives.

"I really need to believe in what I'm doing. To me that’s so important in the job that I do that that’s reflected — that what I’m doing is making a difference," he said. "What we're doing here in Marshall is real. We're helping our community grow. I'm vested here because this is my hometown; I've got family here, I've got friends here, I own property here. I want to see my community succeed. I want Marshall to become the place where everyone says, 'I want to live there. I want to start a life there.' We're on that path and we're going to keep pushing forward."