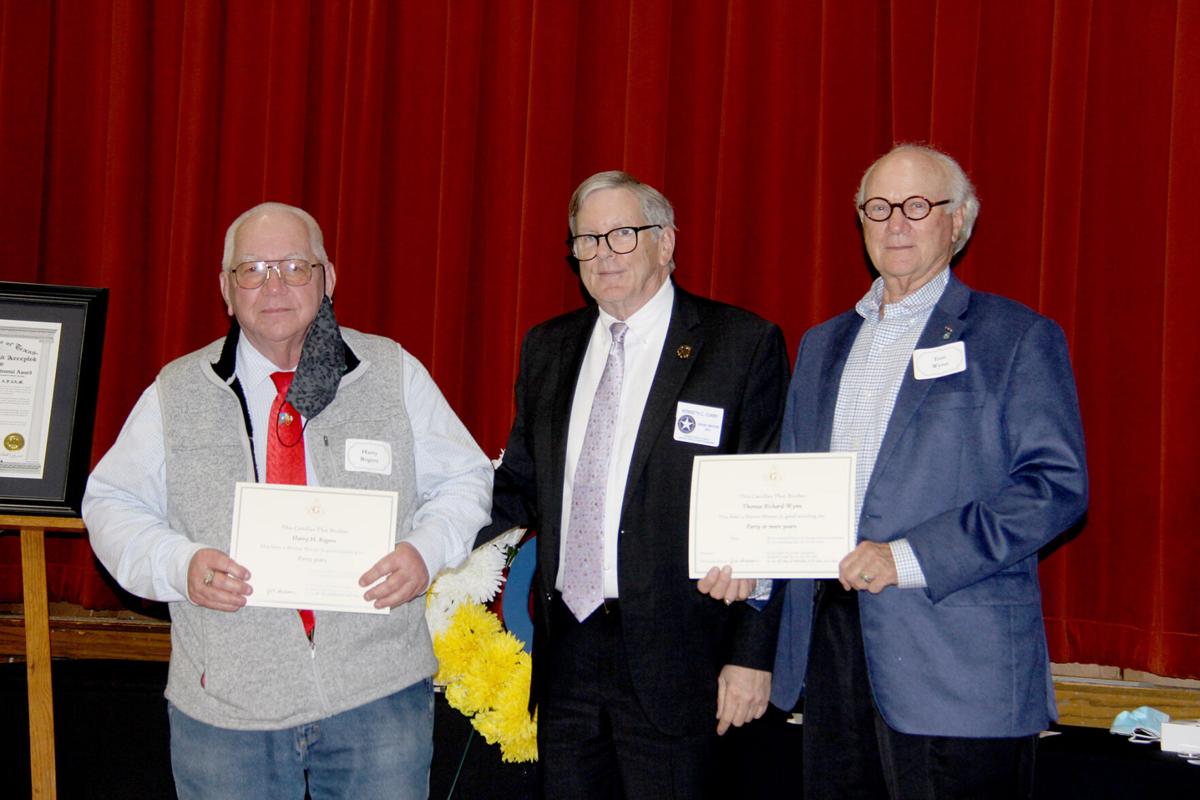 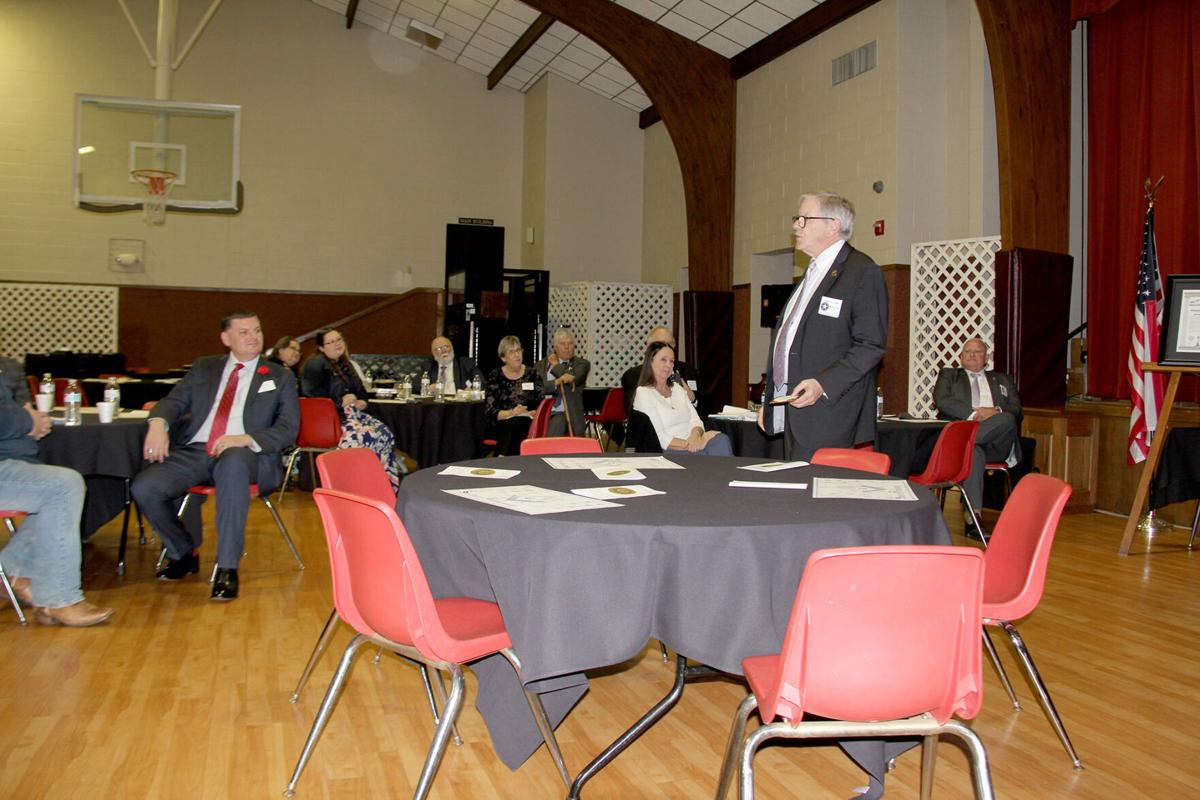 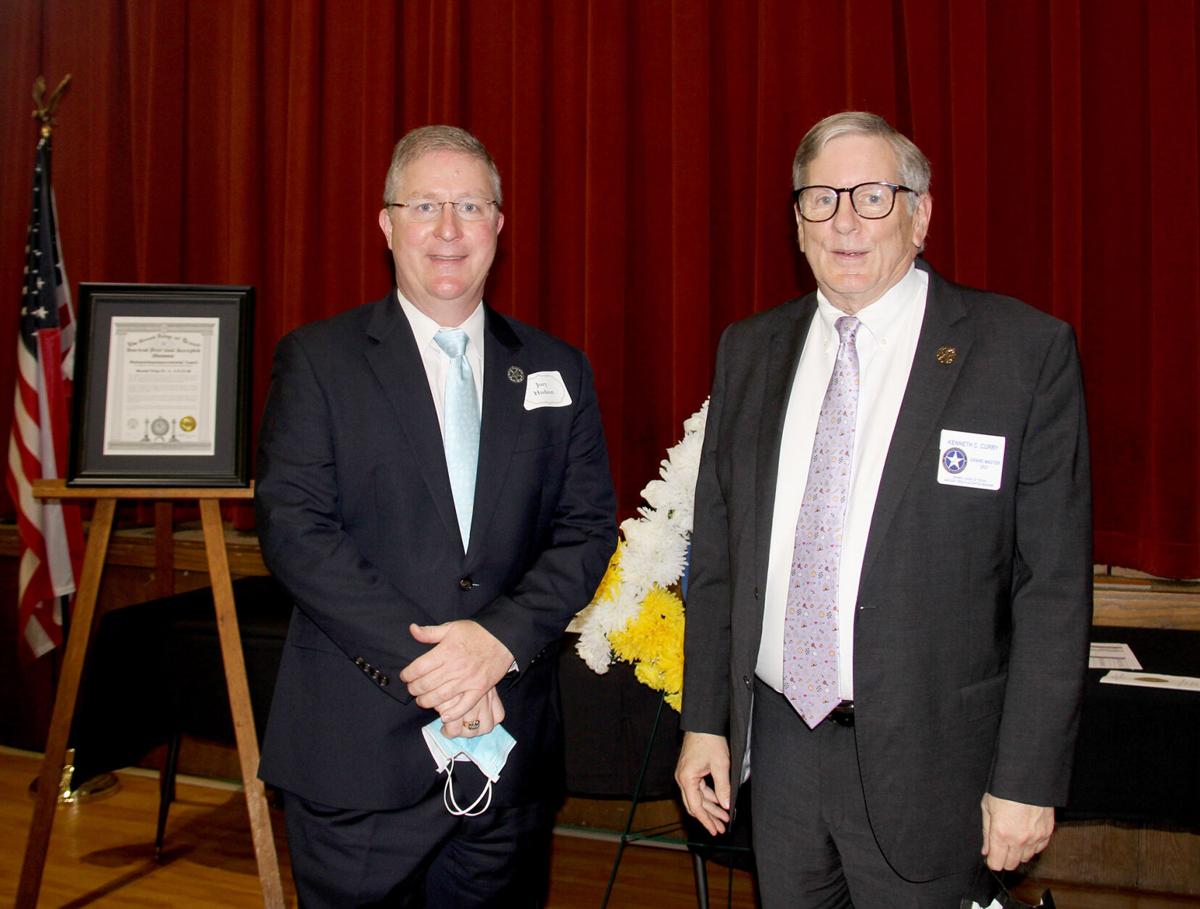 Though no one was quite sure how to pronounce septaquintaquinquecentennial, that did not stop those attending the Marshall Masonic Lodge No. 22’s 175th anniversary commemoration from enjoying themselves Friday night; or celebrating a legacy of history, honor and dedication to others.

The lodge, founded officially in 1845, is one of only 25 lodges chartered by the Grand Lodge of the Republic of Texas, which were formed before Texas received its statehood. The lodge was officially formed Jan. 18, 1845.

Though the lodge officially turned 175 in 2020, they were unable to celebrate due to the COVID-19 pandemic and safety concerns. On Friday, Feb. 26, a socially distanced banquet was held at Cumberland Presbyterian Church with individually catered meals of chicken and steak with salad, dessert and beverages.

Opening the event was Past Master Rex Parkison, who led guests in the Pledge of Allegiance, followed by the Texas State Pledge led by Green. The invocation was led by Past Master of Robert A. Tompkins Lodge No. 1254 Garth Cline.

As Worshipful Master, Hudson welcomed guests, Masons and their families to the event, thanking everyone for attending such a special event.

Hudson, whose family also attended the event with him, shared a special story about what Masonry is truly about. As the father of three children, when the snow storm impacted Texas last week Hudson immediately became worried about his daughter, Sophie Hudson, who is an undergraduate student at the University of Texas. Currently, she is the only child away from home since his son David Owen Hudson is a freshman at Marshall High School and Joseph Hudson is a seventh grader at Marshall Junior High School.

“I know she is a great capable young woman but I couldn’t help but feel helpless as a dad,” Hudson said. While expressing his concerns with a fellow Mason on the phone, his friend mentioned he knew someone in Austin who might be able to help Sophie should the need arise.

“Within minutes we had received texts and calls, both to Sophie and myself, reaching out and offering help,” he said. “That’s what being a Mason is about.”

Along with a special presentation to the lodge for its 175th birthday, 40-year service awards were presented to Masons Tom Wynn and Harry Rogers.

“We are reminded of an expression that the president of a college or university may use when he confers an honorary degree upon someone deemed worthy. He says because of honor you are awarded this degree. It was because of honor that you received the degrees in Masonry. It was because of honor that today you are receiving this 40-year lapel button for your lodge,” Hudson said during the service award ceremony. “This brief ceremony not only pays tribute to the years you have served in Freemasonry but more particularly for your steadfast loyalty to the principles of the Order and your unswerving fidelity to the high and noble purposes of the fraternity. We hope that you will have the health and strength to serve Masonry for many more years.”

For the celebration’s keynote speaker Grand Master of Masons in Texas, Ken Curry, offered some words of encouragement to those in attendance.

“I said before this is an auspicious occasion. If you look at the names on the rosters on the wall and think in 1845 what they were faced with. There was no automobiles, no gas stations...nothing. They had to fend for themselves,” Curry said. “You know that life and survival at that point must have taken 24 hours a day, just to make it through life. They thought enough about Masonry and the value of Masonry teachings to be there as Masons. I can’t imagine how hard that must have been for them at that time.”

Curry also recognized that Masonry is only as good as the women and families that support the Masons within the organization.

“We have wonderful daughters, wonderful wives and without them Masonry is nothing. We depend upon them and our families first and foremost,” he said.

Curry encouraged those in attendance, as the Marshall Lodge starts a new beginning with a new building, what their members truly need from the organization.

Because of COVID-19 for the last year, most organizations have not been meeting.

“We should use this time as Masons to rethink our fraternity. A few years ago a Mason in Houston came up to me and said, ‘You know what is wrong with our fraternity?’ He said we don’t treat our brothers very well. We tend to forget those lessons we have learned at the altar when we took our degrees. It’s a new beginning and I would ask Marshall to rethink that process of brotherly love, spreading love and affection,” Curry said.

Curry ended his keynote speech congratulating the Lodge. Moving forward, currently, Masonic Lodge No. 22 is meeting in their home of 110 years located at 109 East Rusk. However, the Lodge has purchased a lot on East Travis Street and will construct a new lodge building.

“We hope this location will give us better community visibility, an opportunity to interact with our public schools and promote public education and will be a place that will help us grow Free Masonry in Marshall,” Hudson said.

The building is expected to be constructed in about 18 months, pending the sale of the current Lodge building.

“We will meet temporarily at Robert A. Tompkins Lodge in Waskom or James F. Taylor Lodge in Hallsville while our new Lodge is being built. Masonry is a brotherhood of really great and generous people and we are blessed to have had both of those lodges offer their buildings for our use while a new building in Marshall is being completed,” he said.