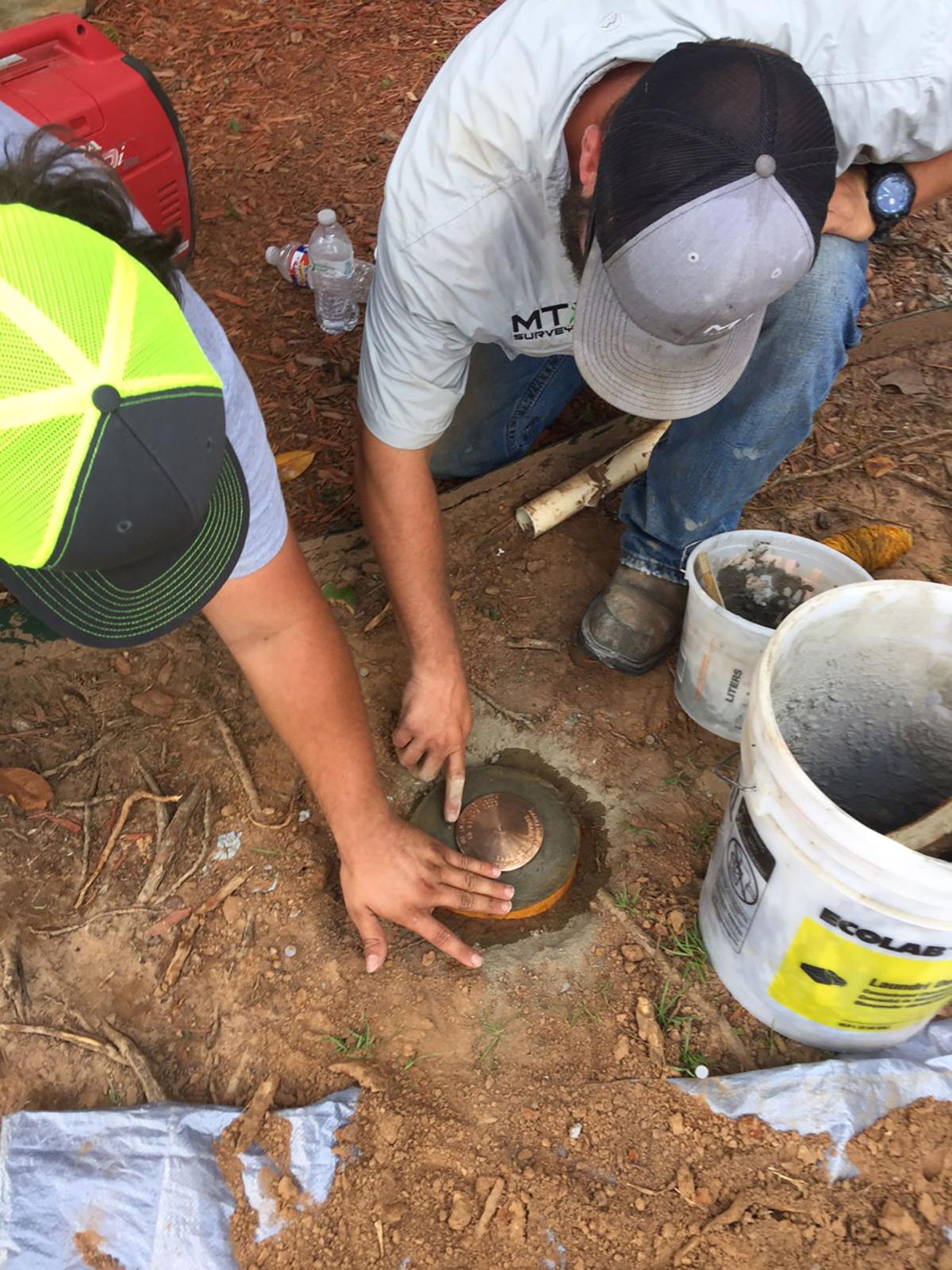 Workers install markers (close up at top) surrounding the courthouse property in the downtown area. 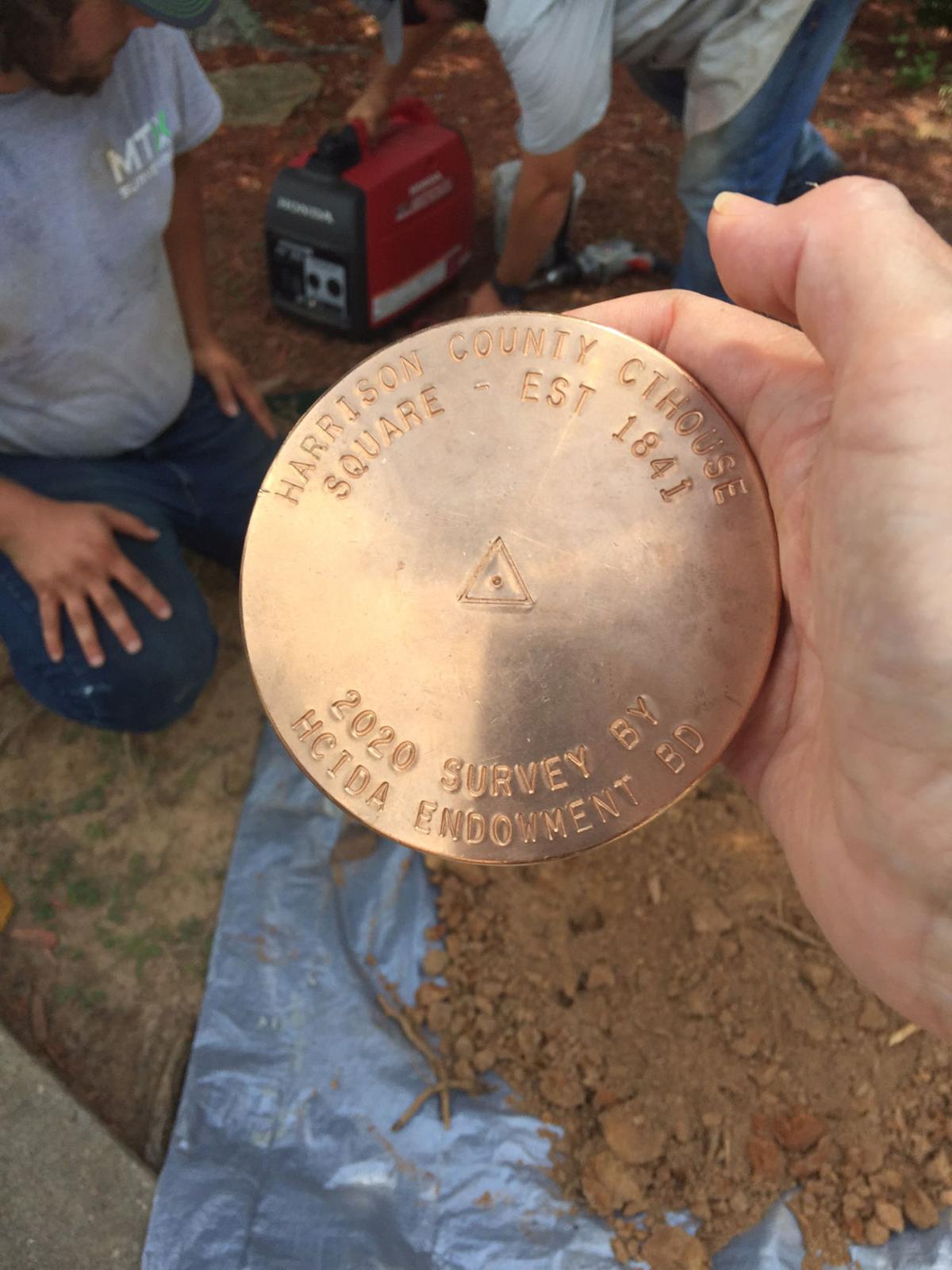 Markers from the 2020 survey surrounding the Historical Harrison County Courthouse downtown property are now in place. 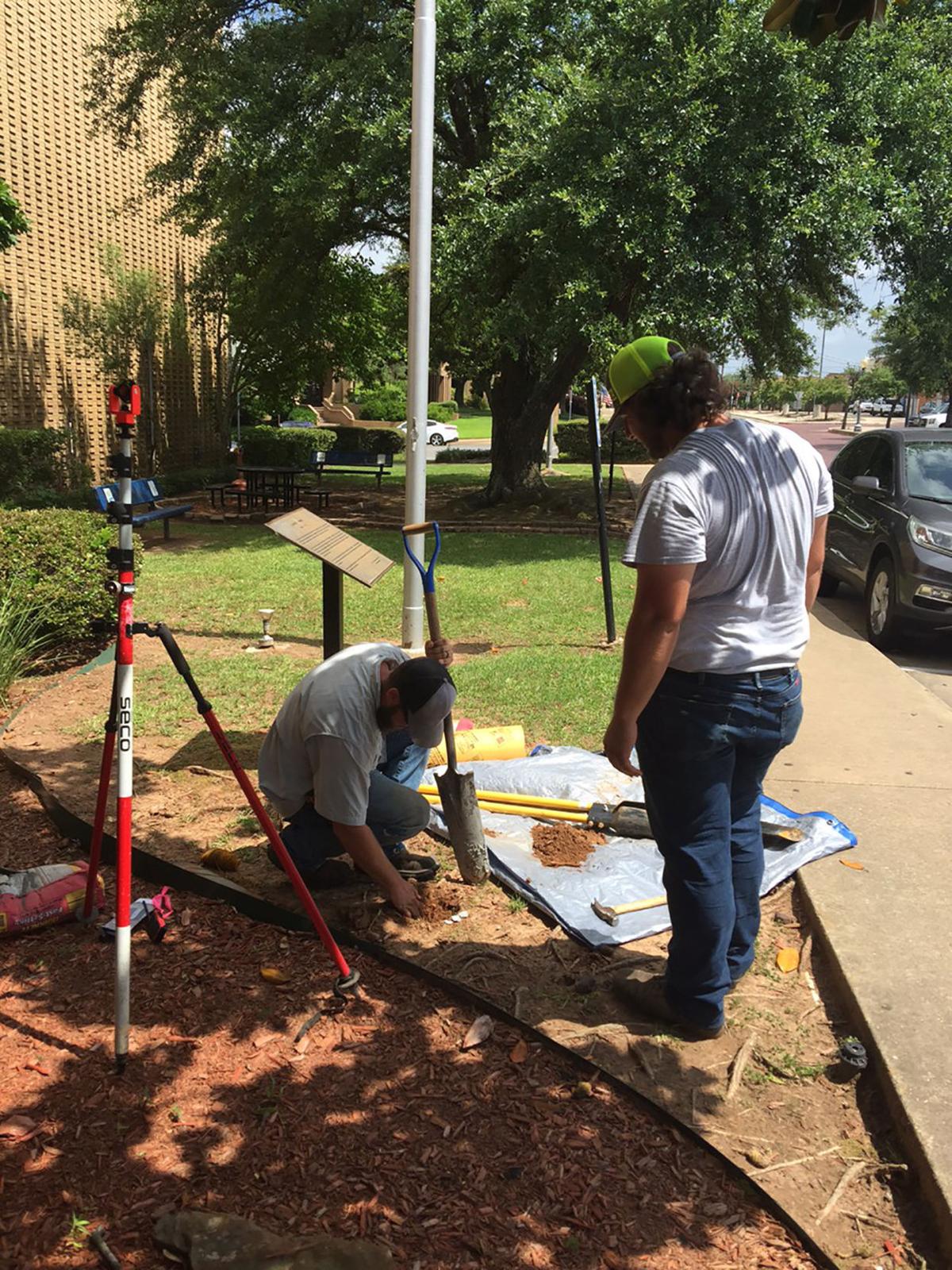 members of the MTX Surveying team, installing the last of the eight survey markers on the Courthouse Square. This corner of the property boundaries is next to the entrance of the 1964 Courthouse. 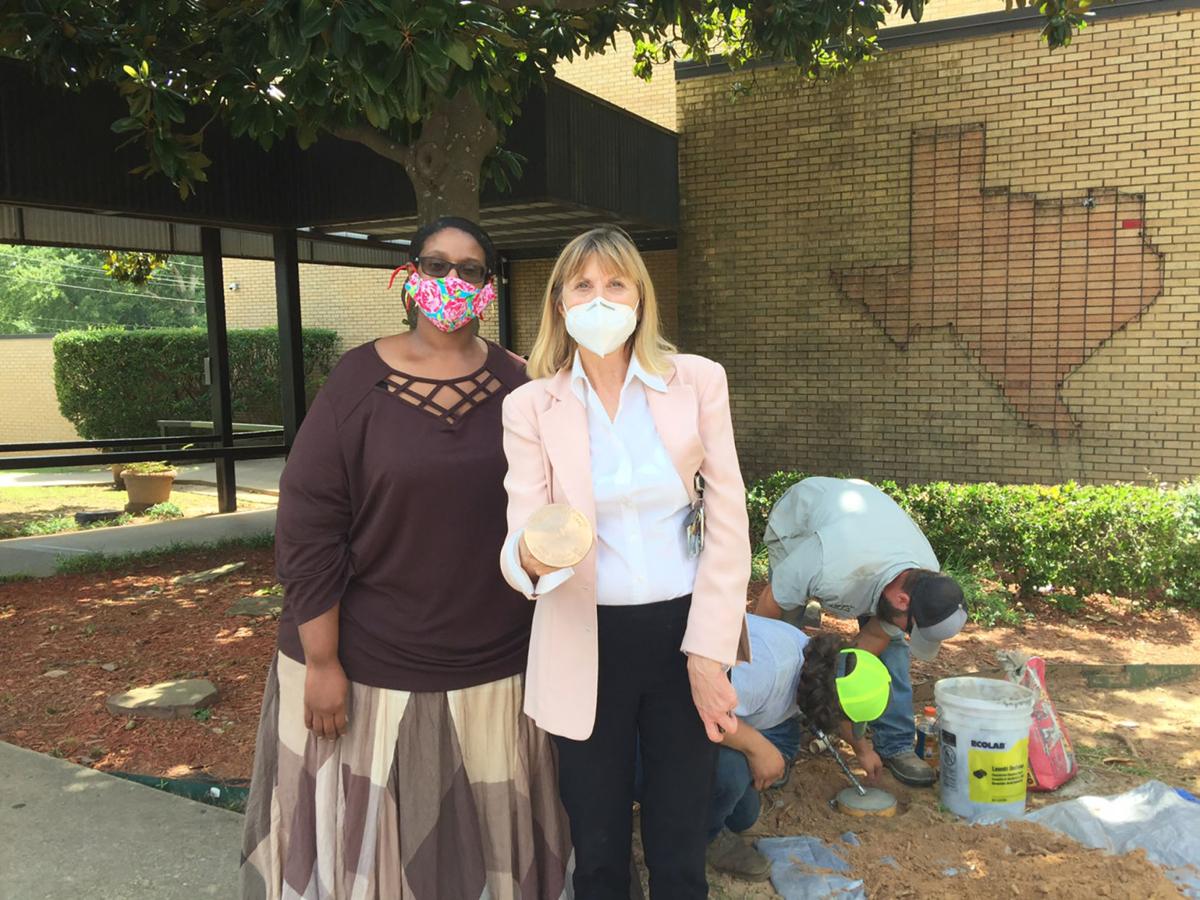 Harrison County Tax Assessor and HCIDA Board Secretary Veronica King and HCIDA Board President Christina Anderson hold the last survey marker to be installed on the courthouse square.

Workers install markers (close up at top) surrounding the courthouse property in the downtown area.

Markers from the 2020 survey surrounding the Historical Harrison County Courthouse downtown property are now in place.

members of the MTX Surveying team, installing the last of the eight survey markers on the Courthouse Square. This corner of the property boundaries is next to the entrance of the 1964 Courthouse.

Harrison County Tax Assessor and HCIDA Board Secretary Veronica King and HCIDA Board President Christina Anderson hold the last survey marker to be installed on the courthouse square.

Spurred by the city of Marshall’s November 2019 reveal of its downtown redevelopment plans, the Harrison County Industrial Development Authority (HCIDA) Board of Directors has followed up with a recommendation to place survey markers on the downtown grounds to determine the rightful ownership of the property, once and for all.

“It’s something that needed to be done anyway,” said Christina Anderson, board president of the HCIDA board, also referred to as the Courthouse Endowment Board.

“We needed to know what the boundaries were once and for all,” she said, sharing it’s always been a question even prior to the city’s proposed downtown redevelopment plans.

The eight 4-inch brass survey markers were installed this past Thursday around the Courthouse Square, and will designate the official corners and property boundaries of the square, owned by the county.

“This has needed to be done for many years and now it’s been done definitively about the land,” said Anderson.

“That’s step one to the home stretch,” said Anderson. “This determines the boundaries.”

The city’s proposed downtown redevelopment plan had called for road closure in front of the courthouse; a green space and outdoor theater area on the east side of Peter Whetstone Square, a children’s splash pad, and a canopied stage for an outdoor theater. Ample outdoor seating was also planned for the southern portion to enable a sight line to the stage. City Manager Mark Rohr had explained that the reuse of this space would take away parking spots in front of the courthouse.

As a result of the then-proposed plans, the Texas Historical Commission recommended to the HCIDA to have the county conduct a survey of the grounds, to at least try to establish ownership, before any further action proceeded.

“The board knew that any changes to the Courthouse Square property would require a State Antiquities Landmark (SAL) permit that would need to be applied for by Harrison County to the Texas Historical Commission,” Anderson explained. “To assist in questions of this nature, the HCIDA-funded survey was designed to determine, definitively, the boundaries of the Courthouse Square property owned by Harrison County.”

The nine-member volunteer HCIDA board voted in February to authorize expenditures up to $4,000 to fund the survey in order to confirm the property boundaries. The survey was done in coordination with Harrison County, and performed by Mark Patheal of MTX Surveying. It was funded by the courthouse endowment, at no cost to the county taxpayers.

“We look forward to sharing with the Commissioners Court, the Texas Historical Commission, and our community the final results of the survey and the final survey report once the markers are installed and the survey is certified,” said Anderson.

“It will be exciting to be able to share a definitive determination of the property boundaries not only for our community’s current purposes but also for all future purposes going forward,” she said.

The installation of the survey markers coincidentally came the same day that the city manager, Rohr, gave an update on the status of the city’s Downtown Redevelopment Plan, that was met with mixed reviews by the community after its initial presentation, and tweaked in March to now four main focuses: streetscaping, Lady Bird Garden, the parking lot on the East side of the courthouse being turned into a gathering spot, and the development of a trail system.

Anderson said the HCIDA believes that a definitive survey, along with historical documents to provide guidance for that survey, would be a very important document for the county and community to have in order to inform and assist with any concerns that the community has regarding ownership of the courthouse square and property boundaries, now, and in the future.

Anderson noted that the HCIDA board has kept County Judge Chad Sims, the commissioners court and the THC apprised of every aspect of the progress of the survey throughout the process.

Anderson explained that the survey was informed by extensive historical research, legal analysis, and the compilation of relevant historical documents dating back to 1841, carried out by former Harrison County Judge Richard Anderson, who now serves in a volunteer capacity as Harrison Courthouse Manager, working with the HICDA board in accomplishing the board’s two-fold mission and work.

In addition to the latest Courthouse Square survey, the HCIDA board has executed six other permanent improvement projects on the restored 1901 courthouse.

These projects include a conditions assessment of the restored building in 2015 to establish permanent improvement needs; the repainting and repair of all exterior windows and doors of the courthouse; the repainting of the area around the interior rotunda; replacing and installing UV-resistant sealant on the courthouse and surrounding sidewalks; repainting the exterior handrails, and re-upholstering the 14 jury chairs in the historic courtroom.

“The HCIDA will share the results of the survey and more information about the process, as well as the historical research that informed the survey, once the survey is officially certified in the coming week,” said Anderson.