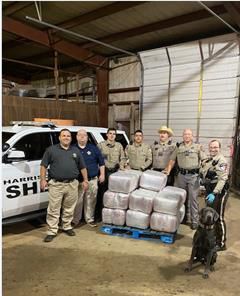 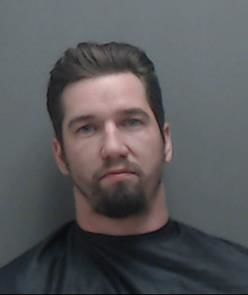 Arrested was 33-year-old Brandon Ashly Beck, of Chicago, for possession of marijuana.

“On October 29, at approximately 5:15 p.m., Harrison County deputies Sgt. Castillo and Hensley performed a traffic stop with a truck tractor semi-trailer north bound on HWY 59 south,” a press release from HCSO indicated. “The tractor truck semi-trailer was stopped for a moving and equipment violation.”

After deputies interviewed the driver Brandon Beck they asked for a state trooper for a truck inspection. Upon further interviewing, deputies determined that the driver’s stories needed additional investigating.

HCSO handler Wallace and HCSO K-9 Hank were called to respond for assistance.

“K-9 Hank gave a positive alert to the odor of narcotics being in the semi-trailer,” HCSO officials said. “Upon deputies’ search of the semi-trailer, they discovered that the truck was carrying laundry detergent. As deputies further inspected the semi-trailer and its load, they found random bundles of what was believed to be marijuana.”

“After unloading the cargo of the semi-trailer, 15 bundles were located, resulting in a seizure of approximately 400 pounds of marijuana,” HCSO officials said.

“K-9 Hank is one of the Harrison County Sheriff Office’s new K-9s,” officials said. “Hank was shipped in from Poland and handler trained at the Little Rock K-9 Academy.”

The K-9 was purchased with funds raised through various fundraising efforts.

“We are so proud that our community has stood behind us to provide our office with much needed top quality K-9s,” HCSO officials said. “This is the second incident in the last six weeks that our new K-9’s have showed our community what they can do. You may recall a few weeks ago K-9 Pato protecting his handler and taking a suspect down after being pepper sprayed.”