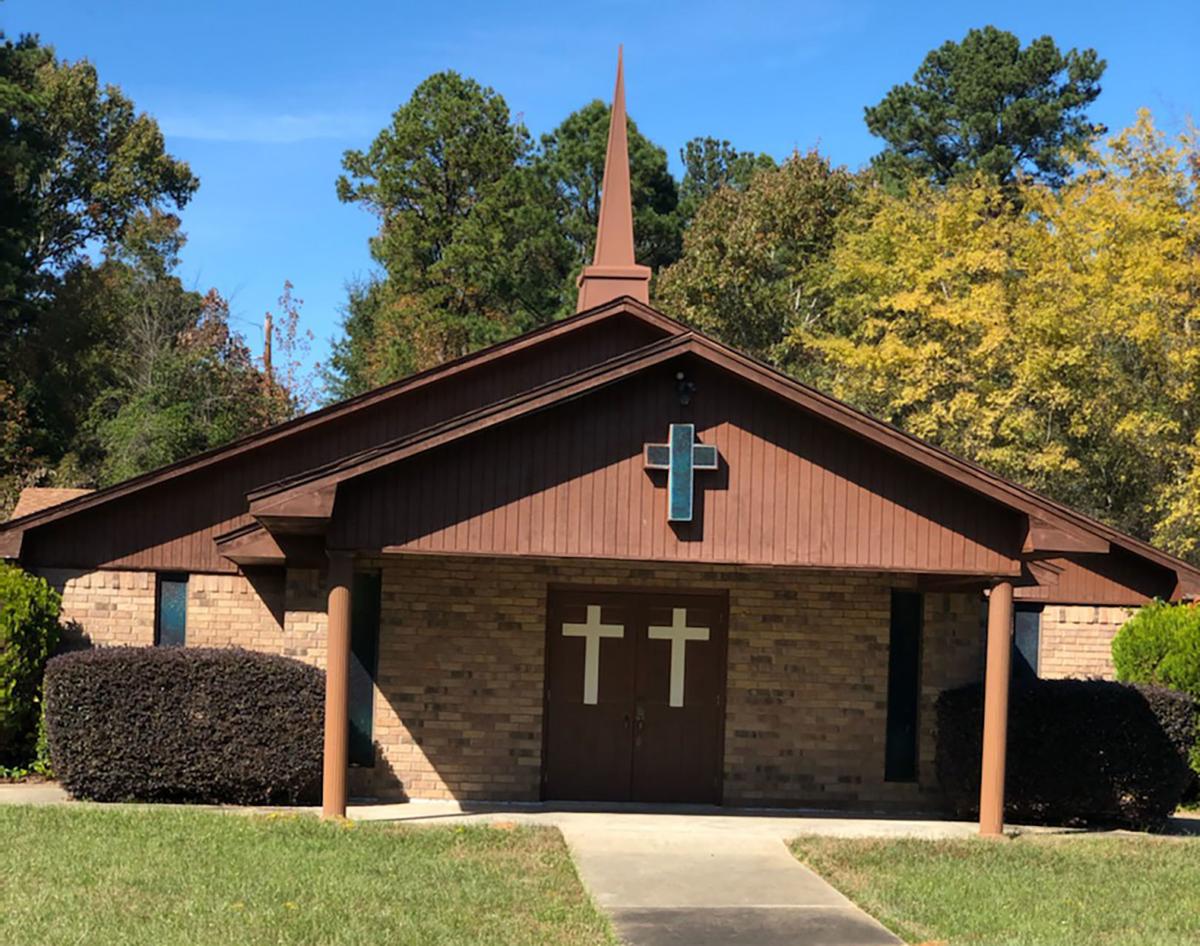 Following a civil dispute over the leadership and financial control of the church, 71st Judicial District Judge Brad Morin has ordered the Collier's Missionary Baptist Church in Karnack to split its services and attempt to resolve their issues. 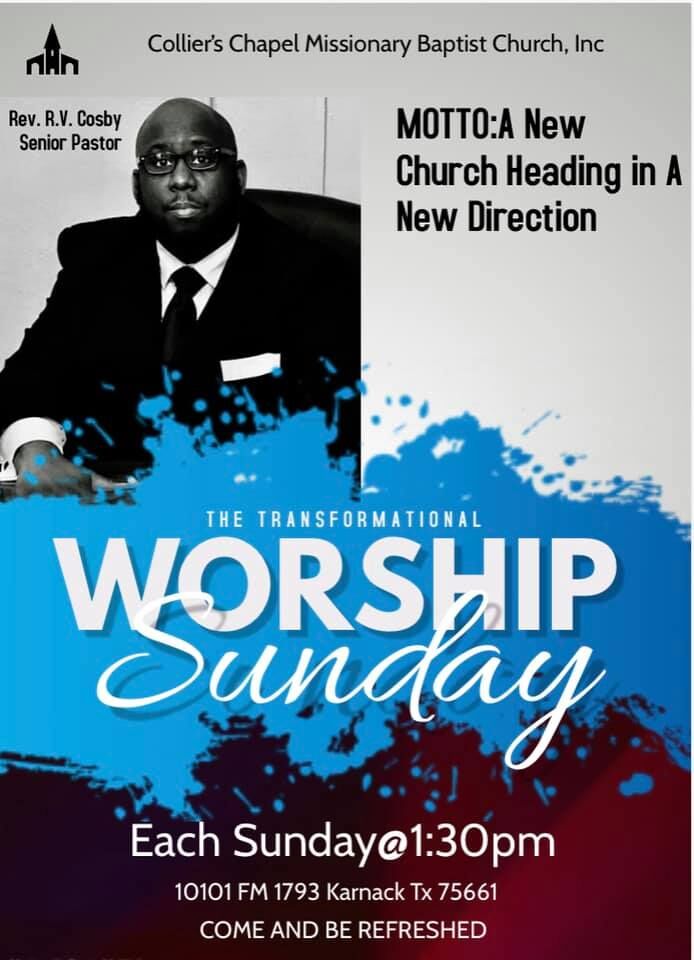 Following a civil dispute over the leadership and financial control of the church, 71st Judicial District Judge Brad Morin has ordered the Collier's Missionary Baptist Church in Karnack to split its services and attempt to resolve their issues.

Following a civil dispute over the leadership and financial control of the church, 71st Judicial District Judge Brad Morin has ordered the church to split its services and attempt to resolve their issues. The order was filed in the Harrison County District Clerk’s office Tuesday, Sept. 8.

“The parties should attempt to resolve their dispute by consulting their governing documents (such as bylaws) or consulting with any governing body of which plaintiff may be a member (such as the National Baptist Convention USA Inc.),” the order signed by Judge Morin states.

The order also dissolves a temporary restraining order that was filed by the new pastor, Rickenski “R.V.” Cosby, and his supporters against members of the deacon board, who no longer wanted Cosby as pastor.

The members who are in support of the defendants, who were served a restraining order after attempting to cut ties with the pastor, following his trial period, can have access to the premises every Sunday between 8 a.m. and noon, all day Monday; all day Wednesday; every Friday between 4 p.m. and 10 p.m. and every Saturday between 3 p.m. and 8 p.m.

The judge further ordered that the longtime checking account of the church be used to pay all of the church’s customary and ordinary bills, such as for water or electricity.

“No extraordinary or unusual expenses shall be made out of this account,” the order states.

The plaintiffs and defendants can, however, establish new checking accounts at a bank for the payment of their respective pastors for any extraordinary or unusual expenses they may incur.

The order also directs that within seven days of its execution that counsel for the defendants shall produce to counsel for the plaintiff all bank statements from the church’s longtime account from Aug. 1, 2019, to Aug. 1, 2020. Additionally, the judge ordered that the plaintiff shall provide the defendants, within three days of the order, a key for the locks that are currently on the church’s building, since having them changed following a lockout.

The new pastor and his supporters had changed the locks on the church after being locked out for two months by the then chairman of the deacon board, Lee Edward Thomas.

Joseph Broadnax, who was appointed as the new deacon chairman by Cosby during the dispute, explained before that the church filed a lawsuit because Thomas kept changing the locks in an attempt to keep Cosby, and his supporting members, out of the church.

Cosby and his supporters alleged in the complaint that defendants Lee Edward Thomas, Johnny Lee McCoy, and Willie James McCoy repeatedly locked the building to prevent Cosby from holding service with the members and also refused to turn over the financial records to the newly appointed finance committee.

Thus, a temporary restraining order was filed on all to prohibit them from changing the locks or accessing the church’s finances.

After filing the restraining orders on Aug. 13, Cosby and members that supported him were able to gain access to the church and hold worship service for the first time in months on August 15.

The day didn’t go without contention, however, as supporters of defendants in the lawsuit gathered on the grounds in protest of the pastor-elect. Security hired by Cosby and his supporting members were onsite as well as law enforcement called by the defendants’ supporters.

“The case, at hand, clearly is about a pastor being terminated during trial period and a conflict between two church factions as to who controls Collier’s Baptist Church,” the defendant’s response to the plaintiff’s complaint states.

Giving background of the dispute, the defendant’s plea to jurisdiction as to restraining order and request to dissolve the restraining order, notes that while majority of the membership chose Cosby as the senior pastor, the defendants sought to prevent him from exercising his office because they allege he is “a disreputable person who is not worthy of the office.”

The defendants contend that the church has no senior pastor and that Johnny Morse Gill, who is a defendant in the matter, is acting as the interim pastor.

According to the defendants, Cosby had at least twice sought to access funds in the church’s account after they terminated his services. They also allege that Cosby refused to turn over the key after being terminated.

Giving background, the defendants’ plea notes that Cosby was selected as interim pastor on March 7 after the church’s former pastor left in September 2019. He was hired in what was to be a maximum six-month observation trial basis. Following a July 8 meeting of the sitting deacon board, interim pastor and trustees, Cosby was provided a written notice by the defendants that his service was no longer needed by the deacon board..

The defendants said the interim pastor, Johnny Gill, notified Cosby that his trial period had been terminated as pastor-elect.

“Upon being terminated, he would not return the keys, which dictated a changing of the locks,” the defendants contended.

The letter sent to Cosby informed the pastor-elect that his service was no longer needed, effective July 8.

“We’ve met with you several times where your conduct was totally out of order, talking about deacon meetings to members, divisiveness and Facebook gossip about the church,” the letter addressed to Cosby stated.

Cosby has contended throughout the dispute that the deacon board tried to oust him out without allowing the church members to officially vote him in as pastor.

Cosby told the News Messenger previously that when it was time for him to be brought before the church in July, following his six-month trial, Thomas decided to get with another deacon and two non members to oust him out.

“The church (membership) has the right to go over the deacon board,” Cosby said, referring to the church’s bylaws.

According to Article I of Collier’s Chapel’s bylaws, the church shall call a senior pastor by a majority vote of members present during a regular business meeting, or a special-called meeting for that purpose when the membership has been fully notified.

The members ended up voting Cosby in as pastor in a parking lot meeting because they were locked out of the church by Thomas, at the time.

“The church congregated together and said we want to meet, we’re getting ready to vote him in. Right here, on this parking lot in 102 degree weather, he locked them out the church and he absolutely called the police on the members,” Cosby previously recalled.

Just as Cosby and his supporting members allege that bylaws were violated, the defendants also accuse the plaintiff for violating the bylaws.

Seven witnesses on behalf of the defendants testified in affidavits that they accepted an invitation to participate in a church conference call on July 21, but was not aware that the alleged purpose was an attempt to replace the governing body of Collier’s Chapel, mainly the defendants.

Defendant Johnny Lee McCoy testified in his affidavit that he had no knowledge of the July 21 meeting, which involved five individuals in person and 18 attending by phone. McCoy said there is no provision in the church’s bylaws that covers voting by phone or meeting without written notice to members of the church.

McCoy said some of the individuals on the phone weren’t even members, and lived as far away as Houston and Florida.

“They are not members under any provision of the church bylaws,” Johnny McCoy contended.

The defendant further argued that Broadnax, who was a deacon on trial at the time, would not under any provision of the bylaws have the authority to call a meeting or approve the alleged actions taken.

The agenda for the July 18 special meeting, in question, called for the discussion and approval of a banking resolution relating to the church’s bank account, a resolution to open a new bank account with new authorizing signatures, a resolution authorizing and directing the finance committee to handle the church’s finances and bills; and authorize a committee to direct legal counsel to proceed in litigation if necessary to gain control over the church’s funds and secure access to physical premises of the church; and to secure and obtain records of the church to make them accessible to members. All items were voted on unanimously.

The defendants in the matter argue that the resolutions were the results of a meeting conducted 13 days after Cosby was terminated while still in a trial period of consideration for pastor.

“Cosby conspired with a group of members, non-members and members who lacked knowledge of Cosby’s fraudulent intent engaged in a meeting in which 78 percent of the participation were in a conference call line,” the defendants argued in their plea.

The defendants argued that Cosby and the group violated the notice time requirements in the bylaws and created an illegal governing body for the 100-year-old church.

“Cosby and others now appear before the court requesting the court to validate their violation of the bylaw and to declare him to be the senior pastor,” counsel for the defendants stated in their plea. “The broad ecclesiastical abstention doctrine prohibits civil courts from exercising jurisdiction over matters concerning the theological controversy, church discipline, ecclesiastical government, or the conformity of the members of the church to the standard of morals required of them.”

The defendants argued that the court, in validating all acts and actions of the plaintiff, which occurred on July 21, in doing so will violate the Ecclesiastical Abstention Doctrine. Paul Turner is the attorney for the plaintiff in the case; William Hughey is counsel for the defendants.