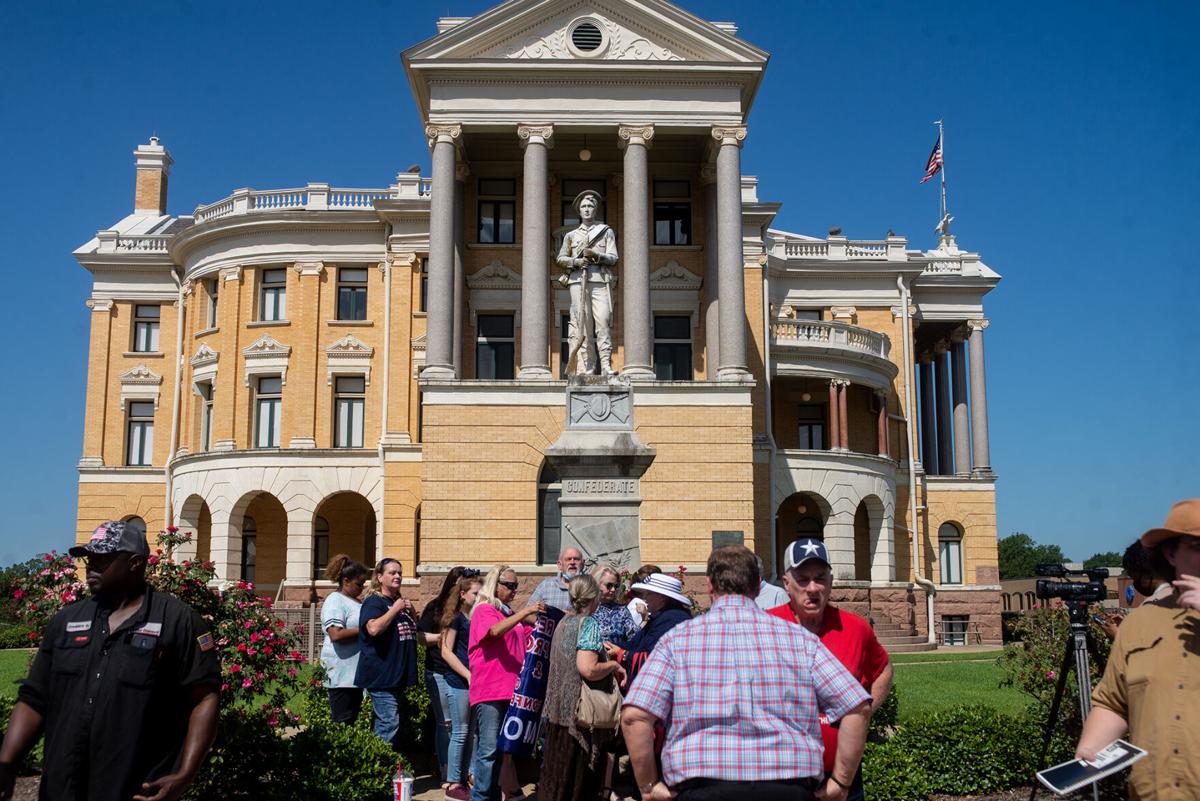 A crowd gathers around the Confederate Soldier Statue outside the Harrison County Historical Courthouse in Marshall in August 2020 when the commission discussed action regarding the statue. 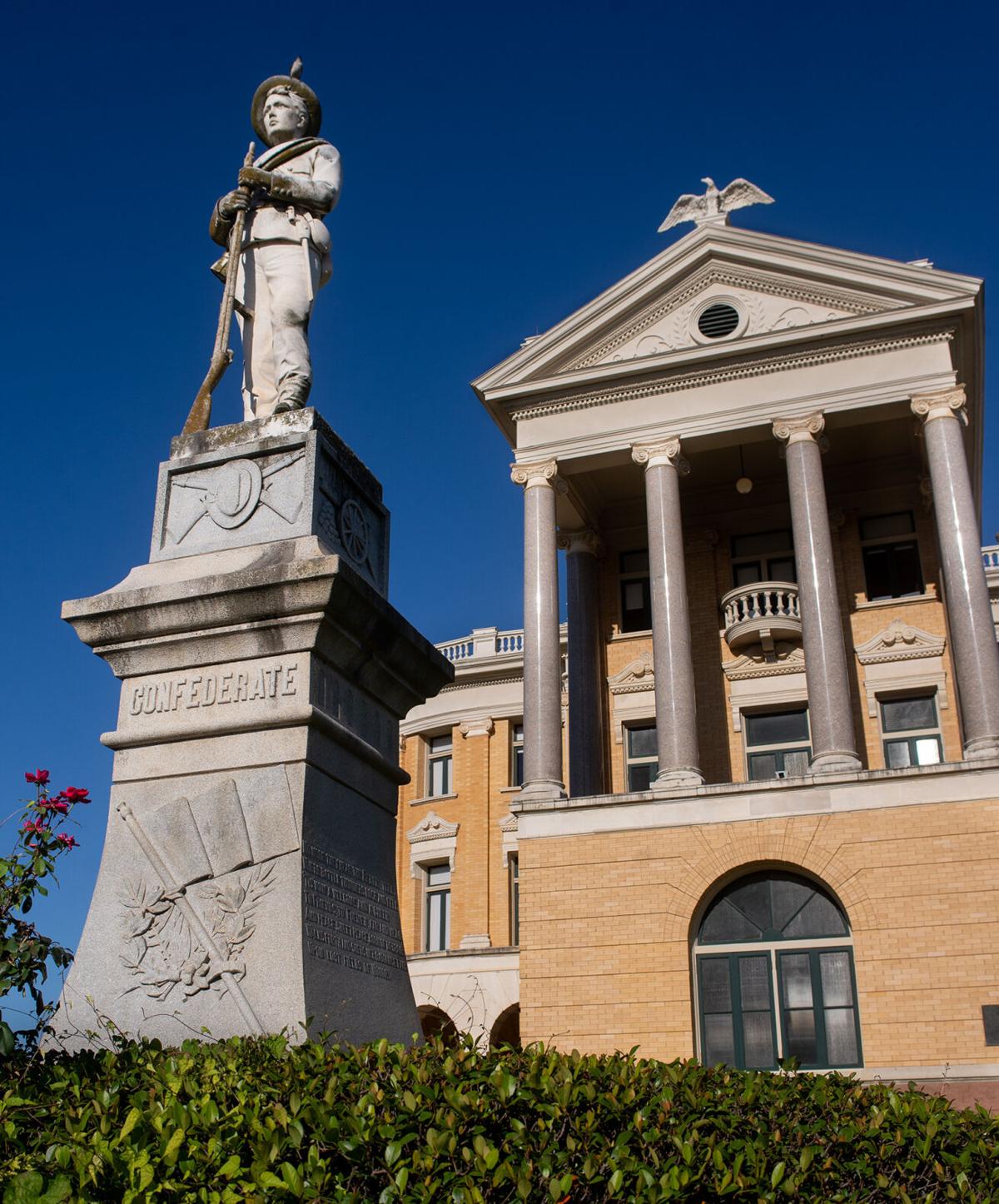 Discussion on the Confederate statue is again on the table.

A crowd gathers around the Confederate Soldier Statue outside the Harrison County Historical Courthouse in Marshall in August 2020 when the commission discussed action regarding the statue.

Discussion on the Confederate statue is again on the table.

A number of local community members renewed calls for the removal of the Confederate statue in front of the historic Harrison County Courthouse in Marshall this week in response to the events that unfolded at the Capitol building in Washington D.C. on Wednesday.

This week, a group of rioters, in support of President Donald Trump, were able to breach the security of the United States Capitol building, causing congress to go into lockdown while they were in the process of certifying the Electoral votes for President-elect Joe Biden.

Many of those who breached the Capitol Building that day were seen in videos and photos waving Confederate flags, and wearing items with the symbol represented on it. Multiple deaths resulted from the events on Wednesday including a woman was shot and killed by Capitol police, three people that died of apparent medical emergencies after the mob attacked the Capitol and Capitol Hill Police Officer Brian D. Sicknick who died due to injuries sustained while on-duty.

In response to these events, community members Demetria McFarland, president of Marshall Against Violence, and Tasha Williams, Founder of the Nu town Revitalization Group, among others, once again addressed the Harrison County Commissioners Court and Judge Chad Sims regarding the removal of the Confederate statue on courthouse grounds.

“For them to boldly and proudly display a noose on the lawns [of the Capitol] is a reminder of how they feel about Black people. If that had been Black people, they would have shot and killed us without hesitation. They allowed those that entered into the Capitol, to be escorted out without even being arrested,” McFarland said. “A few years ago several Black people were inside the Capitol praying on bended knees and they were handcuffed and taken to jail...for praying!”

Both women urged county officials to consider the issue once more in their letters that were emailed to officials early Thursday and argued that the use of the Confederate symbols during Wednesday’s riot showcases the symbols true meaning of hate and division.

Both women also criticized commissioners and Judge Sims in the letters for their silence and inaction on the issue.

“The signs are there, with these symbols of hate continuing to be erected on public property it is silently yet so resoundingly screaming: ‘Black lives don’t matter’,” McFarland said. “We are going a little higher and reaching out to people who I pray, will help us remove these statues and monuments off public property. I am hoping I can eventually get to communicate with soon to be Vice President Kamala Harris and share with her what it’s like here and what can be done to remove these symbols of hate.”

The News Messenger reached out to Judge Sims who stated that he had no comment on the recent letters.

As a compromise, Williams also suggested that if the county was determined to keep the statue where it is, that no taxpayers’ money be used to care for it.

“We should not, as a community, have to pay for the upkeep of something that represents the suffering of our families,” she said. “Even though none of us were around to see it, we still feel the pain caused by those events.”

“I do not want to see the statue destroyed, not at all, but rather, I would like to see it moved to a place that is out of sight, and not on display on public property,” Timmins said.

Timmins stated that if more people of color were elected as county officials, the issue would be addressed differently.

“I have been threatened, and called things that were not my name, things I wouldn’t repeat, because of this issue,” Timmins said. “That’s the thing, what we saw happening in the Capitol, that could have happened just as easily here.”

Additionally, he expressed outrage at the recent events in the Capitol, and explained that he felt it was a mistake for other commissioners to ignore this issue in the hopes that it would go away.

Timmins, who has lived in the county for 65 years, said that he remembers growing up in and around the courthouse when his father worked there for 30 years.

During that time he remembers going through the segregated school system in Marshall, and witnessing the protests at the courthouse then against segregation.

“It was very tense during that time, and naively, I ignored those protests,” Timmins said. “I am not going to ignore this, and those that try to need to know that it isn’t going away. They know who they are.”

This is not the first time that national events have sparked a push to remove the statue in downtown Marshall.

A petition to remove the statue was proposed originally by McFarland in June 2020, after weeks of protests took place outside of the courthouse in response to the murder of George Floyd by police officers in Minnesota.

The petition stirred controversy across the county, and inspired a number of community members opposed to the relocation of the statue, to start counterpetitions to keep it where it stands currently.

In August 2020, a motion to was made during a Harrison County Commissioners meeting by Timmins to request permission from the Texas Historical Commission to move the statue, but was then rescinded after no second was made by other commissioners. Timmins rescinded the motion in order for future action on the issue to potentially be taken.

This motion was made after over an hour of public comments on the issue, and left the statue in front of the courthouse. No additional action has been taken by the county since that time.

Timmins has spoken favorably of relocating the statue, and has been the only commissioner to do so, though he has yet to address the commission publicly on the matter.

“That is something that I plan to do in the near future,” he said.

“That’s the way that it works, and I have spoken to other commissioners about that being an issue,” Timmins said, “Basically, we are silencing people.”