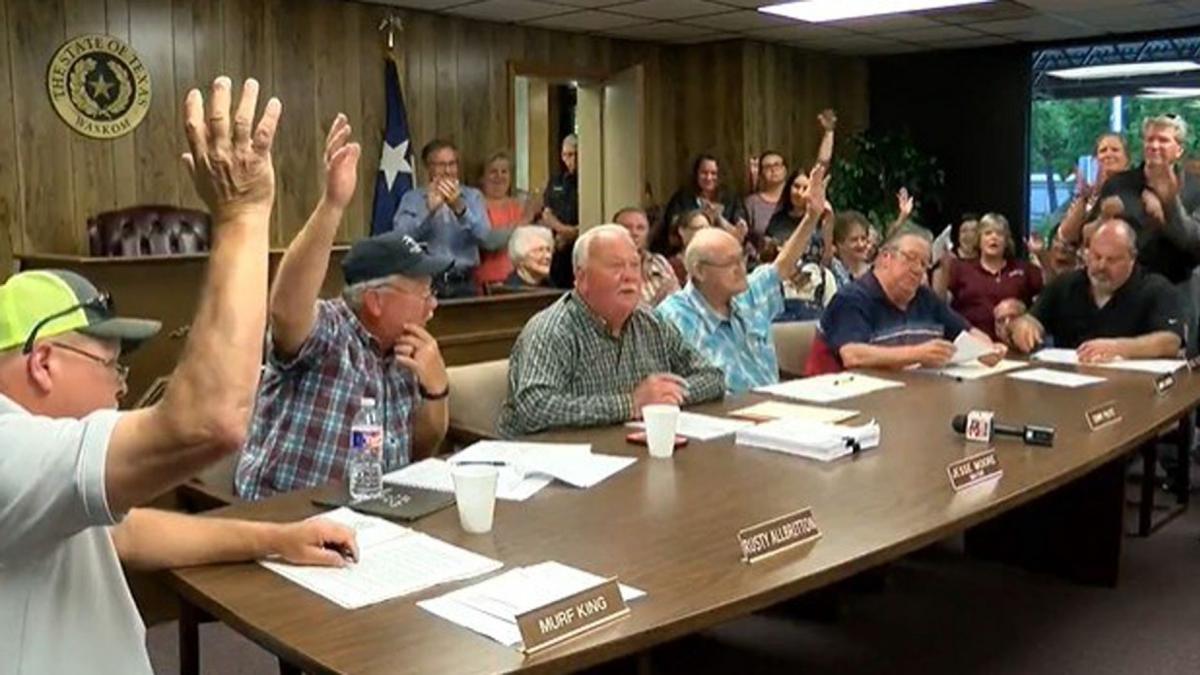 Waskom City Council unanimously approves a resolution and ordinance for the Right to Life on Tuesday, making the town the first “sanctuary city for the unborn” in Texas. 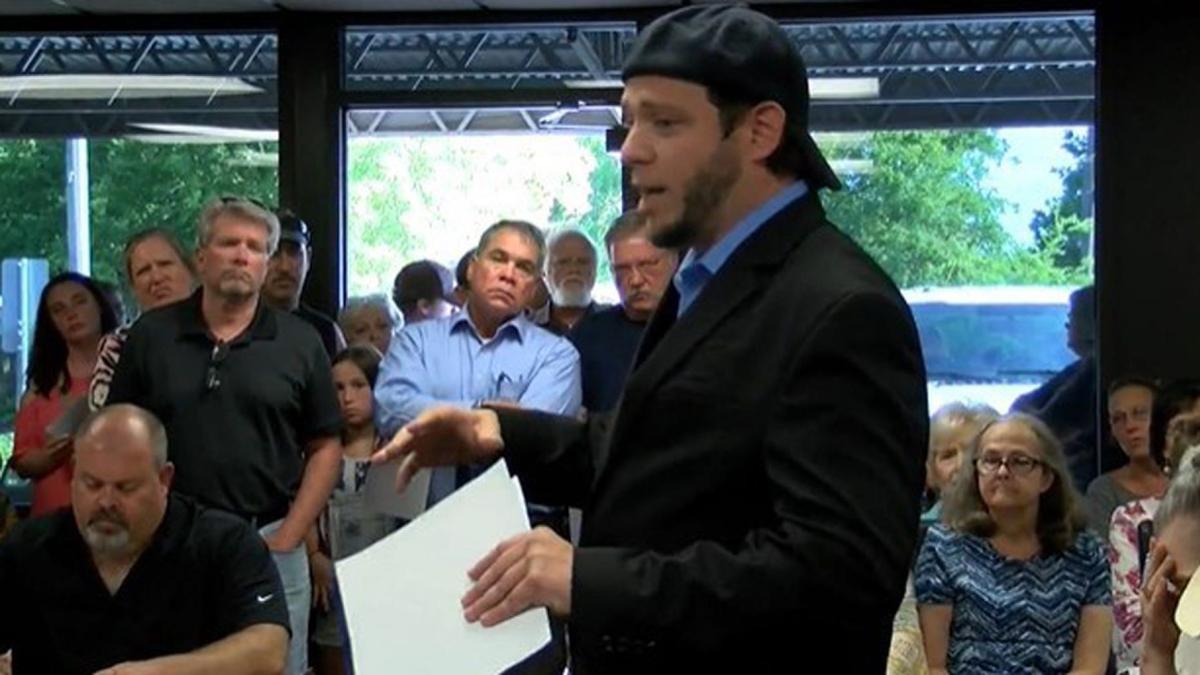 Right to Life of East Texas director, Mark Lee Dickson, presented an ordinance to Waskom City Council on Tuesday declaring Waskom as a “sanctuary city for the unborn.” 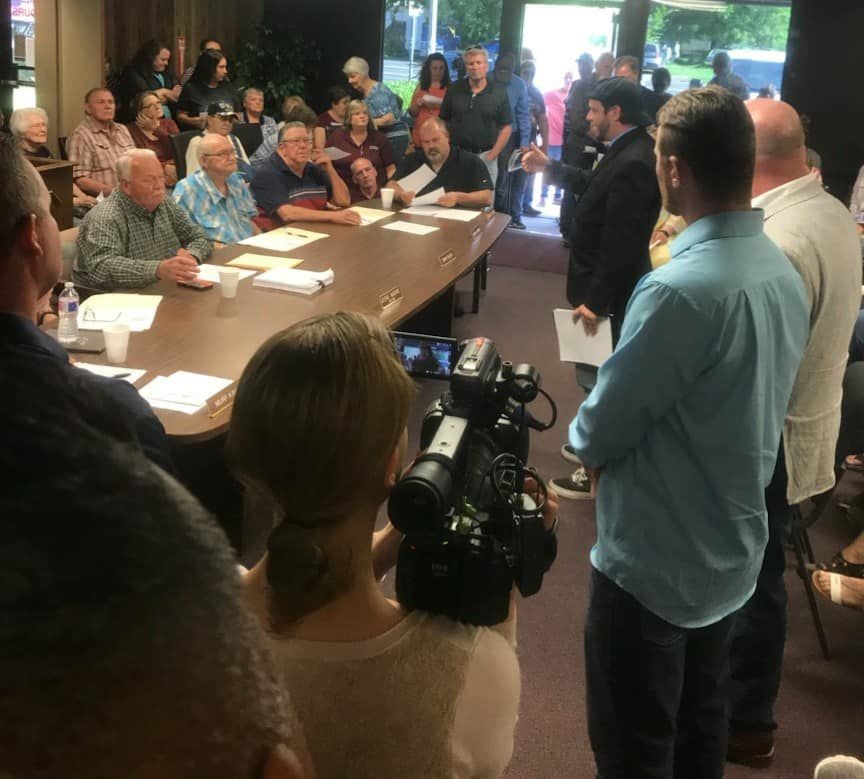 Waskom City Council unanimously approves on Tuesday a resolution and ordinance for the Right to Life, declaring the town the first “sanctuary city for the unborn” in Texas.

Waskom City Council unanimously approves a resolution and ordinance for the Right to Life on Tuesday, making the town the first “sanctuary city for the unborn” in Texas.

Right to Life of East Texas director, Mark Lee Dickson, presented an ordinance to Waskom City Council on Tuesday declaring Waskom as a “sanctuary city for the unborn.”

Waskom City Council unanimously approves on Tuesday a resolution and ordinance for the Right to Life, declaring the town the first “sanctuary city for the unborn” in Texas.

WASKOM — The city of Waskom took a stand against abortion on Tuesday with the city council unanimously adopting a resolution and an ordinance in support of Right to Life East Texas, becoming Texas’ first “sanctuary city for the unborn.”

Waskom Mayor Jesse Moore said the city council was happy to support the organization in the historic move.

“Right to Life approached us because the abortion laws are changing in Louisiana, Alabama and Mississippi that the abortion clinics may start moving to Texas,” said Moore. “With Waskom being the first city, 18 miles (west) from (Shreveport) Louisiana, they were anticipating one moving over here.

“The citizens in Waskom, they don’t want to have an abortion clinic in Waskom, so they presented the board last night with an ordinance and resolution that will make abortions in the city of Waskom a criminal offense,” the mayor said.

He said the action won’t stop abortion clinics from moving to Waskom, “but if they do they’ll be breaking the law.”

The passing of the ordinance comes at the heels of legislation signed by Texas Gov. Greg Abbott on June 7, that prohibits cities and counties from doing business with abortion providers.

According to cbs.com, the bill, which takes effect Sept. 1, specifically prevents local governments from entering into reduced tax and lease agreements with such organizations.

It also prevents cities and counties from “advocacy or lobbying on behalf of the interests of an abortion provider or affiliate.” It does not impact hospitals or doctor’s offices that perform fewer than 50 abortions a year.

Moore said when approached by Right to Life about the “sanctuary city for the unborn” ordinance, the city first sought counsel from the city attorney before moving forward.

“Our city attorney was not familiar with abortion clinics, the rules and regulations,” said Moore. “He said he’d have to get some lawyer friends and would have to research it. It could take weeks or months.”

The mayor said he’s glad the ordinance was passed, but admits that the unknown of a clinic ever moving there is scary.

“It’s kind of scary because you don’t what’s going to happen here in the near future, but from the support shown from the citizens last night, I think we’ll be able to fight it as far as we have to fight it to keep the law (upheld),” he said.

“Waskom’s known as the gateway to Texas and we’ll just have to wait and see because you know we’re in some unknown territory that we’ve never even thought about hardly,” said Moore.

According to its Facebook page, Right to Life of East Texas is an organization that exists to promote respect for the worth and dignity of all human life, including the life of the unborn child from the moment of conception.

Mark Lee Dickson, the director with Right to Life of East Texas who addressed the city council Tuesday, thanked the city for its support.

“Tuesday night was a great victory for life,” Dickson told the News Messenger Wednesday. “The city council’s vote has had a ripple effect across the state and people everywhere have been reaching out wanting to know how they can follow in the footsteps of Waskom, Texas, and outlaw abortion in their city.”

Dickson said the ordinance outlawing abortion within the city of Waskom and declares the city of Waskom to be a “sanctuary city for the unborn,” is right in seeking to align itself with the United States Constitution and not the Supreme Court’s unlawful court opinion in Roe v. Wade.

“A surgical or a chemical abortion is the purposeful and intentional ending of a human life,” said Dickson. “It is murder with malice aforethought and it is, and always will be, the WRONG thing to do.

“The idea that the United States Supreme Court must be obeyed when they write opinions that uphold INJUSTICE and MURDER is a LIE. This ordinance outlawing abortion in Waskom, Texas refuses to believe and propagate this lie, but seeks to expose it as false.”

The Right to Life director said this ordinance is liken to the woman who has had enough of her lying boyfriend and sends the message that “enough is enough. I’m not doing this anymore. I’m done with your lies.”

Quoting the ordinance, Dickson said the Supreme Court lied in Roe v. Wade when it said that pregnant women have a constitutional right to abort their pre-born children,

“Nowhere in the Constitution do we find abortion to be a constitutional right,” he said. “As the ordinance continues to say, ‘Roe v. Wade, 410 U.S. 113 (1973), is a lawless and illegitimate act of judicial usurpation, which violates the Tenth Amendment by trampling the reserved powers of the States, and denies the people of each State a Republican Form of Government by imposing abortion policy through judicial decree.

Dickson said for those who say it does not make sense for the small, vulnerable, innocent city with a population of 2,189 to pass a resolution and an ordinance outlawing abortion and declaring itself to be a sanctuary city for the unborn, he reminded them of the early 90s, when Louisiana’s abortion laws became more and more strict, making Texas become more appealing to clinics.

“In the early 90s, when the legislation in Louisiana became more and more restrictive, the founder of Hope Medical Group for Women said: ‘If Louisiana is shut down, obviously it would make sense to move right over the line,’” Dickson recalled, referring to a Shreveport Times article during that time that quoted then Hope Medical Clinic Director Robin Rothrock saying she will move the abortion clinic to Waskom if a federal judge upheld Louisiana’s abortion law, HB 112, which outlawed abortion except in cases of rape, incest or to save the mother’s life.

The News Messenger also wrote about the issue in a June 20, 1991 article.

“This legislative session, in an attempt to protect innocent unborn lives, a Democrat Governor in Louisiana signed a Heartbeat Bill into law,” Dickson said, referring to that time period. “The legislation on abortion in Louisiana is not getting less restrictive, but more restrictive. The fact that this has been considered before is reason enough for the citizens of Waskom, Texas to make every reasonable action in their power to make their small, vulnerable, innocent city safe from the possibility of one day being the Abortion Capital of the Ark-La-Tex.

“It obviously makes sense,” the Right to Life director said.

In the article, Jim Walsh, who was pastor of First Baptist Church in Waskom and president of the Ministerial Alliance in Waskom at the time, adamantly opposed such an establishment in the East Texas community, saying he’d try to burn it down.

Fast-forward to this past Sunday, when First Baptist Church joined Right to Life of East Texas for a historic gathering called, “The Rally for the Right to Life,” held at the church.

Right to Life of East Texas posted on its Facebook page that Rusty Thomas with Operation Rescue/Operation Save America gave a message entitled, “The Church, Abolition and the Paradigm Shift” and Jon Speed from Christ is King Baptist Church in Syracuse, New York, presented a document called, “The Resolution for Life.”

The resolution, which was adopted by Waskom’s city council on Tuesday, declares “that all human life, including fetal life at every stage of gestation, must always be protected and that society must protect those who cannot protect themselves.”

Speed, who assisted Right to Life of East Texas with the earlier versions of the ordinance, said he’s thankful for the boldness of the city council of Waskom.

“Not only were they willing to go beyond a mere proclamation and add an ordinance to the concept of the Sanctuary City for the Unborn, but they are willing to take this fight to end abortion to the next level,” said Speed. “They are willing to act like people who really believe that abortion is murder.”