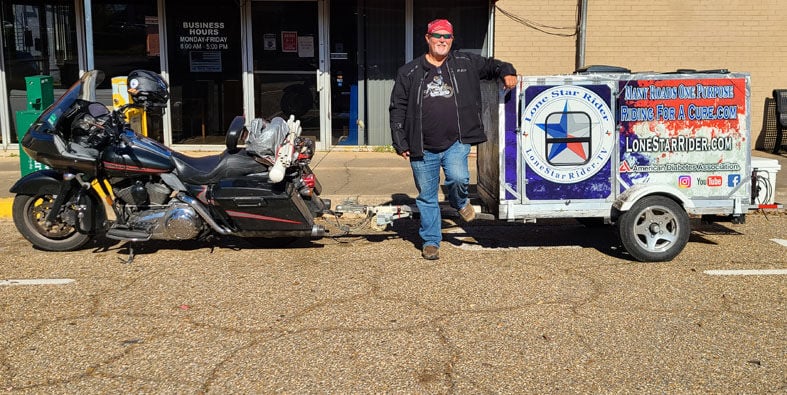 Motorcyclist Rex Covington, known as the Lone Star Rider, rode through Marshall, Tuesday, as part of his “Riding for a Cure” effort to raise awareness and money for the American Diabetes Association. 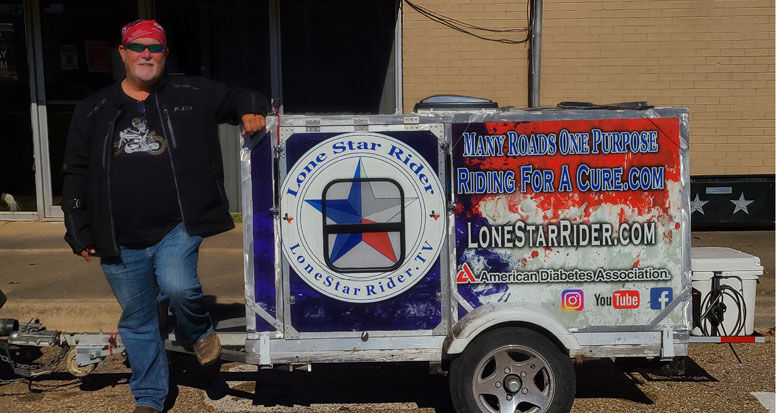 Motorcyclist Rex Covington, known as the Lone Star Rider, stopped in Marshall, Tuesday, as part of his “Riding for a Cure” effort to raise awareness and money for the American Diabetes Association.

Motorcyclist Rex Covington, known as the Lone Star Rider, rode through Marshall, Tuesday, as part of his “Riding for a Cure” effort to raise awareness and money for the American Diabetes Association.

Motorcyclist Rex Covington, known as the Lone Star Rider, stopped in Marshall, Tuesday, as part of his “Riding for a Cure” effort to raise awareness and money for the American Diabetes Association.

With a trailer in tow and a mission in his heart, motorcyclist Rex Covington, known as the Lone Star Rider, cruised through Marshall, on Tuesday, as part of his “Riding for a Cure” effort to raise awareness and funds for the American Diabetes Association.

“What I want to happen is to eliminate this disease — to get rid of it,” said Covington, who lost his son to Type 1 diabetes.

So far, he’s raised nearly $10,000 for the organization. The American Diabetes uses 15 percent of funds raised for overhead. The rest helps with research, assists families and funds camps for children suffering with diabetes

“I love going to those,” Covington said of the youth camps. “Kids love the motorcycle. They basically teach the kids how to live with the diabetes.

“It’s a really good organization,” he said of the American Diabetes Association. “I love them and they love me because of the money I’m raising.”

Covington was moved to partner with the American Diabetes Association, following the death of his son, Chris, who was diagnosed with Type 1 diabetes in 2003, and died at age 37, in 2015, when he blacked out while driving.

“When he was diagnosed with Type 1 diabetes, his sister took him into the hospital,” Covington recalled. “He had a blood sugar over 800 and he almost died there.

“About five years later, he started having problems keeping his blood sugar leveled. He would black out,” Covington said.

One blackout led to a minor accident, one time, and the responding officers thought that he was drunk. Covington recalled another time where his son’s blood sugar levels were so high that he had to wake him up out of his sleep.

“I had to wake him up out of bed because he was late. I got him orange juice; and he said he was going to the doctor and try to get it rectified,” said Covington.

When his son died at age 37, Covington was devastated.

“He was 37 when he passed away,” the father said. “He went to work and he blacked out and died in a fiery car crash.”

The death left Covington feeling hopeless. The loss weighed heavily on him.

“I wasn’t really any good to anybody for a couple of years,” the father recalled. “I was around the house, basically a slob.”

Nevertheless, he became inspired, in 2018, by a dream to reach out to the American Diabetes Association.

“I had this dream that I was riding around the United States, raising awareness and money and then I raised $90,000,” Covington shared. “This dream was so vivid. I was handing this symbolic check — that said $90,000 — to the American Diabetes Association.”

He shared the dream with friends and family. They encouraged him to go for it.

“They said you need to do this. So I inquired, checked, did a bunch of stuff,” said Covington. “I found myself on the road six months later.

“Everything was just falling into place,” he said.

Covington celebrated the kickoff with a launch party at a Texas Harley Davidson dealership, on his birthday, that May. On June 21, 2018, he repaired his trailer for traveling and began his journey, first to the west coast.

And although he hasn’t been able to complete many miles this year due to the COVID-19 pandemic, the motorcyclist has been able to raise more money.

“I guess that’s because I keep continuing on,” Covington said.

He uses his trailer to sleep, along the way.

“I rebuilt the trailer,” he said.

“Now I’m doing this Ride Around Texas State Line (tour),” he shared. “I started in Gainesville, Texas. Of course, I’m coming through Marshall for that to keep going on.

“You go close as you can to the state border, just go all the way around, and stop to talk to the newspaper, people, and visit courthouses,” he described of the journey. “I like doing that.”

As of Tuesday, Covington was on his 12th day of his current Ride Around Texas State Line tour.

“I will end (back) up in Gainesville, Texas,” he said. “I just go all the way around the state line, go by Big Bend, over by the Mexican border, El Paso, up there and then back down.

“It’s going to take me about a month because I don’t ride fast,” he said.

As part of his awareness program, Covington rides to rallies, festivals, vents and other places that the American Diabetes Association suggests to raise more awareness.

Law Tigers, America’s Motorcycle Lawyers, also supports his efforts and sponsor vendor spots for him at rallies to further bring awareness to his campaign.

“I’ve spoken to many different clubs like the Lions Clubs,” said Covington, who is a Fort Worth resident and former Arlington-based fireman/paramedic.

The father said he wants to raise money for research to help prevent the same fate of his son. The journey has been fulfilling for him, allowing him to not only raise money for a worthy cause, but also providing an avenue for him to heal.

“When my family members and my ex girlfriend said I needed to do this, I didn’t know how therapeutic it would be,” said Covington. “It gave me purpose and something to do; and the one thing that I do for myself in all this is that I spread my son’s ashes all over the United States.

To support Covington’s cause, donations can be made to for the American Diabetes Association at the website, RidingForACure.com.

“Every penny counts towards a cure for diabetes,” said Covington. “All that money goes directly to the Diabetes Association and that’s what I prefer.”

To sponsor Covington on his journey at a cost of $1 per month, visit the website Patreon.com/LoneStarRider.