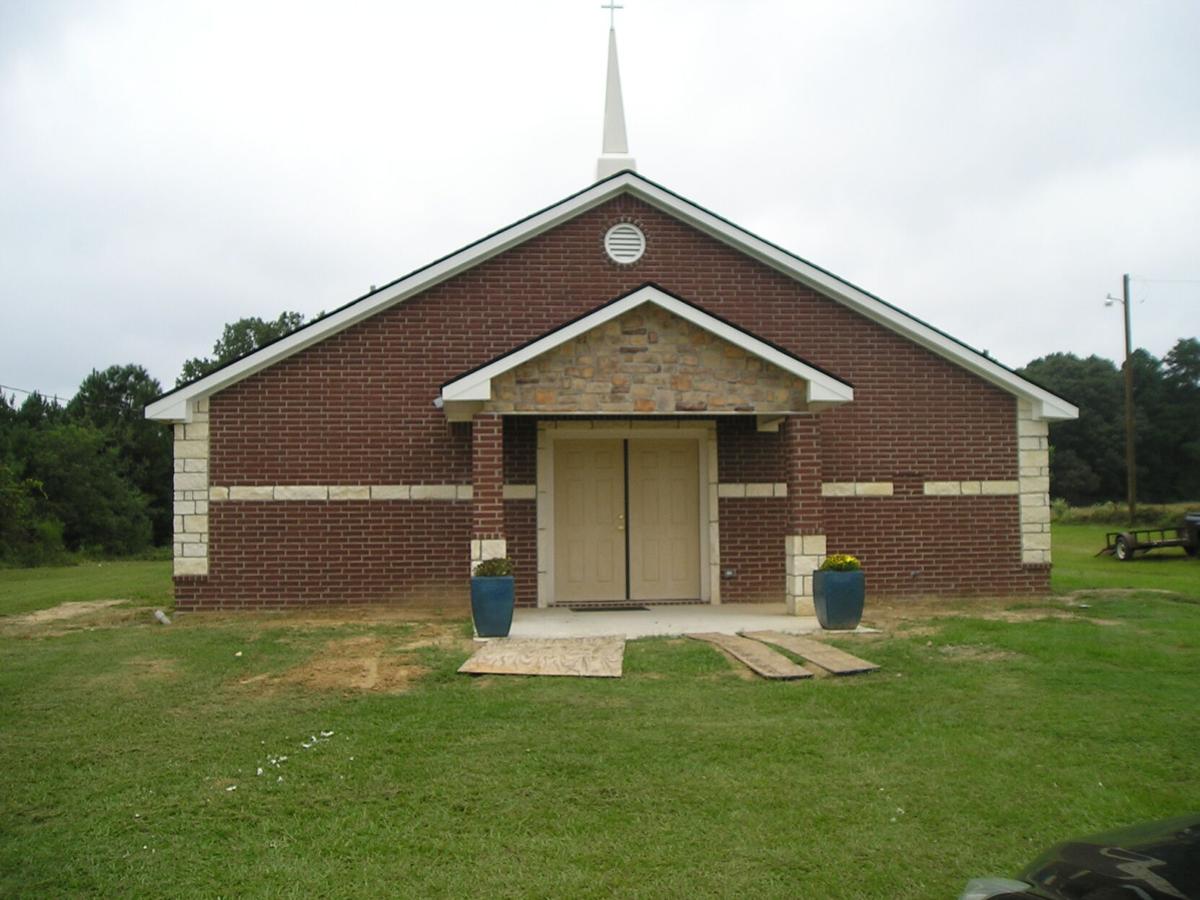 Zion Missionary Baptist Church will celebrate the dedication of its new building at 3 p.m. Sunday after losing its old structure in a 2015 tornado. 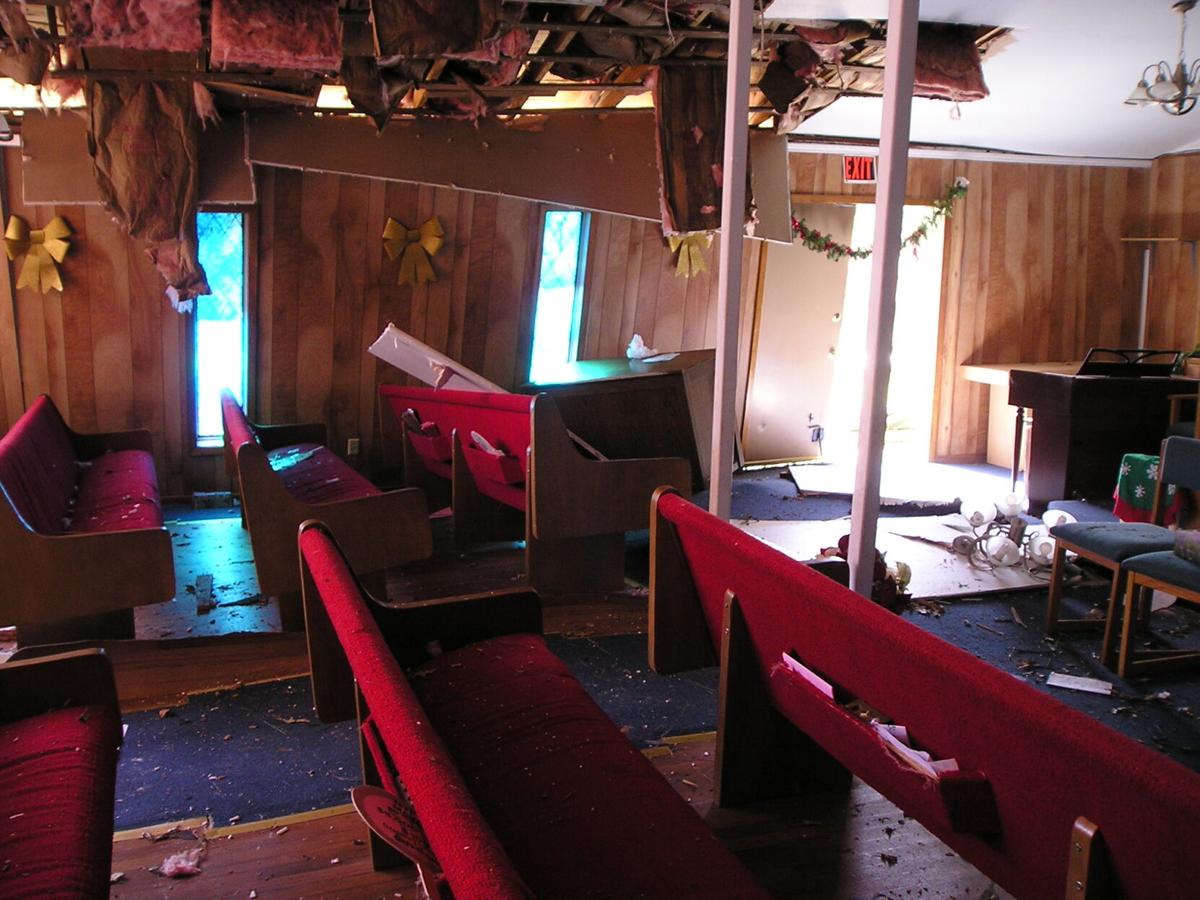 Zion Missionary Baptist Church, located in Marshall's Woodlawn community, is shown ripped apart in December 2015 from an EF-2 tornado. The church looks forward to celebrating the dedication of its new building, at 3 p.m., Sunday, Nov. 8, 2020, after losing its old structure in a 2015 tornado. 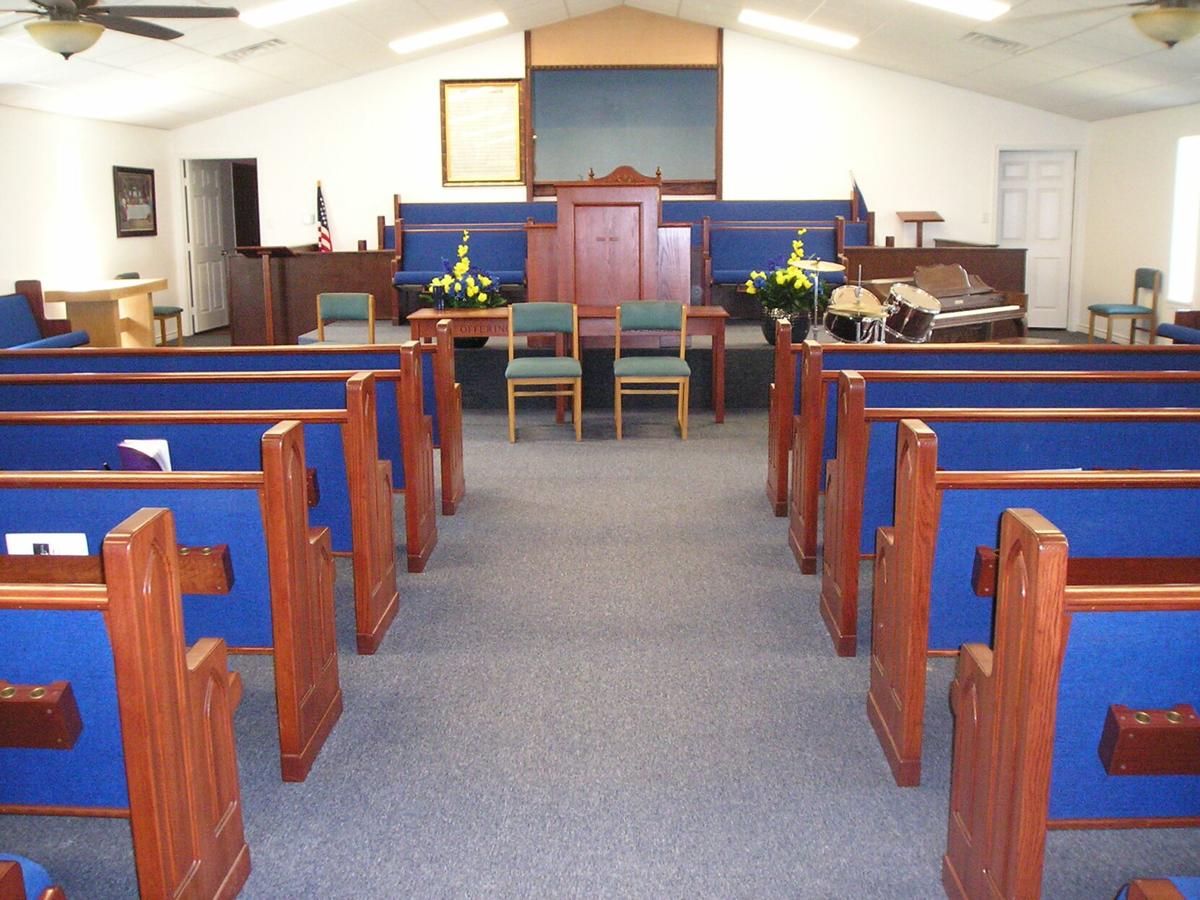 Zion Missionary Baptist Church, located in Marshall's Woodlawn community, will celebrate the dedication of its new building, at 3 p.m., Sunday, Nov. 8, 2020, after losing its old structure in a 2015 tornado. Pictured is the inside of the new sanctuary. 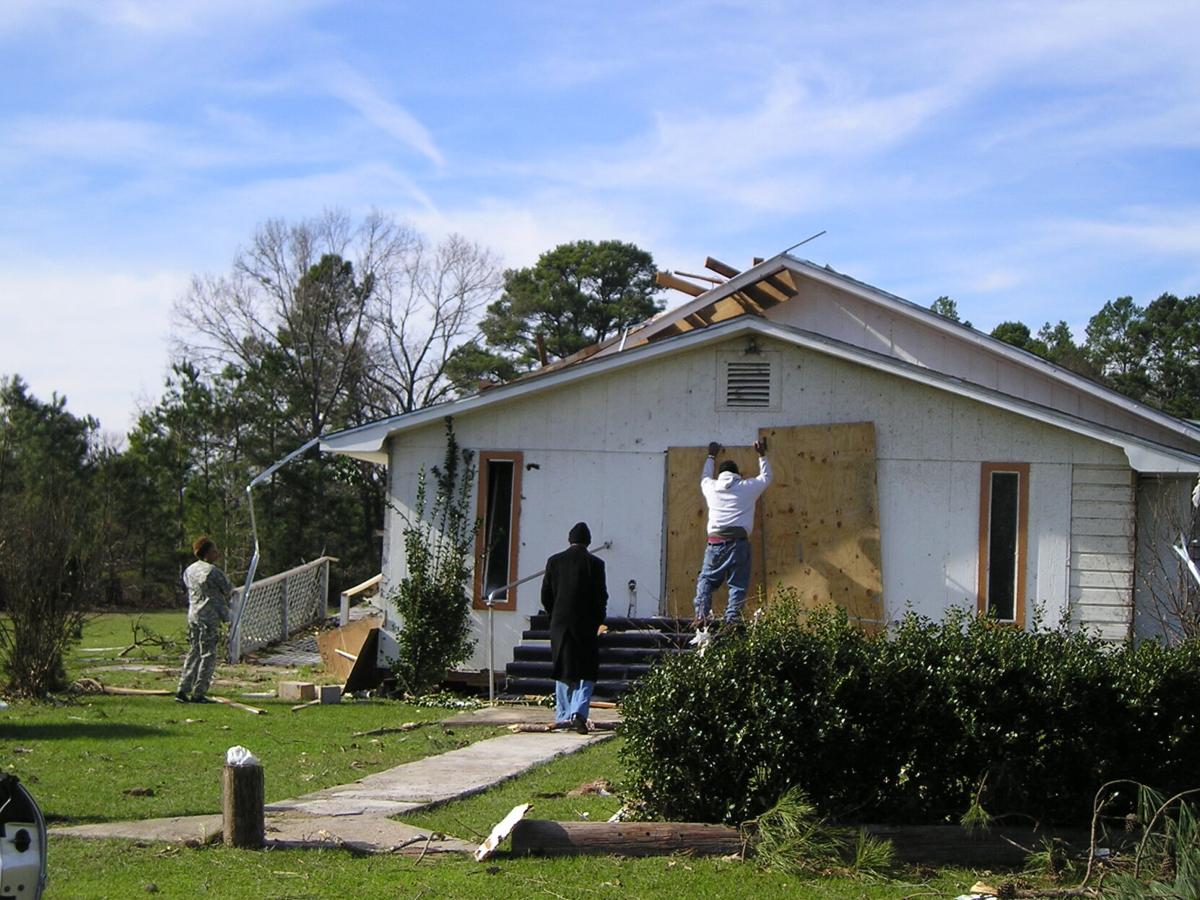 The old structure of Zion Missionary Baptist Church, located in Marshall’s Woodlawn community, is shown boarded up after being destroyed in December 2015 by an EF-2 tornado. The church looks forward to celebrating the dedication of its new building, at 3 p.m., Sunday, Nov. 8, 2020, after losing its old structure.

Zion Missionary Baptist Church will celebrate the dedication of its new building at 3 p.m. Sunday after losing its old structure in a 2015 tornado.

Zion Missionary Baptist Church, located in Marshall's Woodlawn community, is shown ripped apart in December 2015 from an EF-2 tornado. The church looks forward to celebrating the dedication of its new building, at 3 p.m., Sunday, Nov. 8, 2020, after losing its old structure in a 2015 tornado.

Zion Missionary Baptist Church, located in Marshall's Woodlawn community, will celebrate the dedication of its new building, at 3 p.m., Sunday, Nov. 8, 2020, after losing its old structure in a 2015 tornado. Pictured is the inside of the new sanctuary.

The old structure of Zion Missionary Baptist Church, located in Marshall’s Woodlawn community, is shown boarded up after being destroyed in December 2015 by an EF-2 tornado. The church looks forward to celebrating the dedication of its new building, at 3 p.m., Sunday, Nov. 8, 2020, after losing its old structure.

“We have come this far by faith” is more than an inspirational hymn to Zion Missionary Baptist Church, of Marshall.

It’s the congregation’s testimony as members look forward to dedicating a new church building, on Sunday, after an EF-2 tornado destroyed their former structure in December 2015.

“The only thing I can think of when I think about the journey we’ve come through is that we have come this far by faith, because we had to believe in faith to keep going,” said Patricia Haggerty, wife of Zion’s pastor, Rev. Thomas Haggerty.

“Some people dropped along the side, but we kept going; we kept staying together,” she said as she continued to share the story of their journey. “And we’ve come this far by faith believing that God would provide for us, and He has.”

Zion invites the public to a special dedication service of the new building, starting at 3 p.m., Sunday at the church, located at 5379 Farm-to-Market Road 1793 in the Woodlawn community, of Marshall.

“So many of you have helped us to finally, again, have a building of our own,” Rev. Haggerty said on the invitation. “Therefore, we could not celebrate without inviting you to come and celebrate with us.”

The guest speaker for the occasion will be the Rev. Chris Holt, pastor of the Mt. Pleasant Baptist Church, of Jefferson. Due to the COVID-19 pandemic, face masks are required.

“We are looking forward to a great time in praise and worship and thankfulness to our Lord and Savior Jesus Christ,” Rev. Haggerty said.

Zion was celebrating its 11th year at the church site when the EF-2 tornado completely destroyed the old building on Dec. 27, 2015. At the time, the National Weather Service had confirmed that an EF-2 tornado had hit the Marshall, Harrison County area that Sunday evening, destroying structures, splitting trees and knocking out electricity.

“What it did was it picked it up and dropped it down,” Mrs. Haggerty said, recalling the damage done to the former church building. “It was on pier and beam, so that’s how the air managed to get up under it.”

The destruction left the congregation devastated, as the building was claimed a total loss.

“The roof and all of that just caved in, and parts in the back of the church were just in a pile of rubble,” Mrs. Haggerty described.

Nevertheless, the congregation kept the faith and continued to hold worship service as they worked on rebuilding.

“The first place we went was to the hotel, which is now the Clarion Pointe, next to Waffle House. We worshipped in their conference room, from the Sunday directly after the tornado up until May of the following year,” Mrs. Haggerty recounted.

Needing an air-conditioned space, the congregation subsequently moved their worship services to the Texas and Louisiana Association Building on Karnack Highway.

“They had offered the building several times, and finally we took them up on their offer,” Mrs. Haggerty said, noting they utilized that location from May 2015 to February 2018.

From there, the congregation moved their service to Woodlawn Community Center where they stayed from February 2018 to September 2019. They slowly moved into their nearly completed new church building, thereafter.

“Our building wasn’t totally finished, but we had air conditioning,” said Mrs. Haggerty. “We didn’t have carpet; we didn’t have pews, so we had lawn chairs and we worshipped here.

“Of course, as we were worshipping, we kept things rolling and finally we got carpet and flooring and pews,” she said.

Getting to the point of completing the new construction wasn’t easy, however. The church found itself in a three-year court battle with the insurance company, but thankfully prevailed.

“What happened (is) we had insurance, and the company cancelled us — not from nonpayment,” Mrs. Haggerty explained. “We didn’t know in time that they had cancelled our policy. They did not give us proper notification. They sent out a letter, but if you don’t send it to the correct address, then the people that are involved don’t get it.

To cover the rest of construction costs, the church sought various lending institutions for assistance.

“The amount of money that the insurance company gave us from the trial was not enough money to build the church. We went as far as we could and then we had to borrow money,” said Mrs. Haggerty.

“We went to several lending institutions to try and get money. For six months, we went from one to another and we couldn’t get any money. Nobody could get us approved at the rates that we were looking for until we got to Red River Credit Union,” she shared. “Red River Credit Union gave us the best deal.

“We have borrowed enough money from them to bring the church to its present condition,” Mrs. Haggerty said.

She said the loan officer, Bob Bruggeman, in particular went above and beyond to make sure the transaction was a success.

“He’s out of Texarkana, but he came down here to visit with us to see how much we had accomplished; and we had prayer and he went back and started working on a loan for us,” Mrs. Haggerty recalled. “So we have to give him credit for making sure we got the money that we needed.”

The pastor’s wife said local attorney, Paul Turner, was also instrumental in their journey, serving as their lawyer in their lawsuit against the insurance company.

The church is also grateful for the donations received from the Texas Baptist Association and from the Houston-based Old Ham Little Church Foundation.

Mrs. Haggerty said they are looking forward to having such instrumental people and entities share in Sunday’s dedication.

When all this first happened there were some churches that sent us some donations and some of the community sent us donations,” she said. “They did what they could for us, and we want to thank all the community that helped us from the time that this happened, up until the present.”

Mrs. Haggerty said it feels wonderful to realize their goal of rebuilding, following the destruction.

“We never lost hope as to we wanted to do,” she said. “We had expectations, but once you get to this point, our expectations were exceeded into what we thought it was going to be.”

“It’s more (larger) and more beautiful than we thought it was going to be,” she said of the new building. “When you sit here and you look at it and you think about how you’ve gone through one step to another to get to this point, (it’s a blessing).”

Mrs. Haggerty said another blessing in the storm is that Pastor Haggerty served as the general contractor for the rebuilding project, and managed to do the job for half the cost.

“We tried to get some other construction people to see how much they would charge to build the church and they were charging like $400,000 to build the church,” she shared. “We didn’t have that kind of money, so Rev. Haggerty took on the job as being the general contractor.

Everybody that came during the construction period was always amazed at what he had done with the amount of money that we had.

“The final appraisal is a $550,000 building that we built for half of that amount,” Mrs. Haggerty noted. “He was working for the church for the church’s benefit. He used the money well. Where most people would get three bids, he got four or five. He would find people to do the work, according to how much he wanted to spend, and took — sometimes — a small amount of money a long way.”