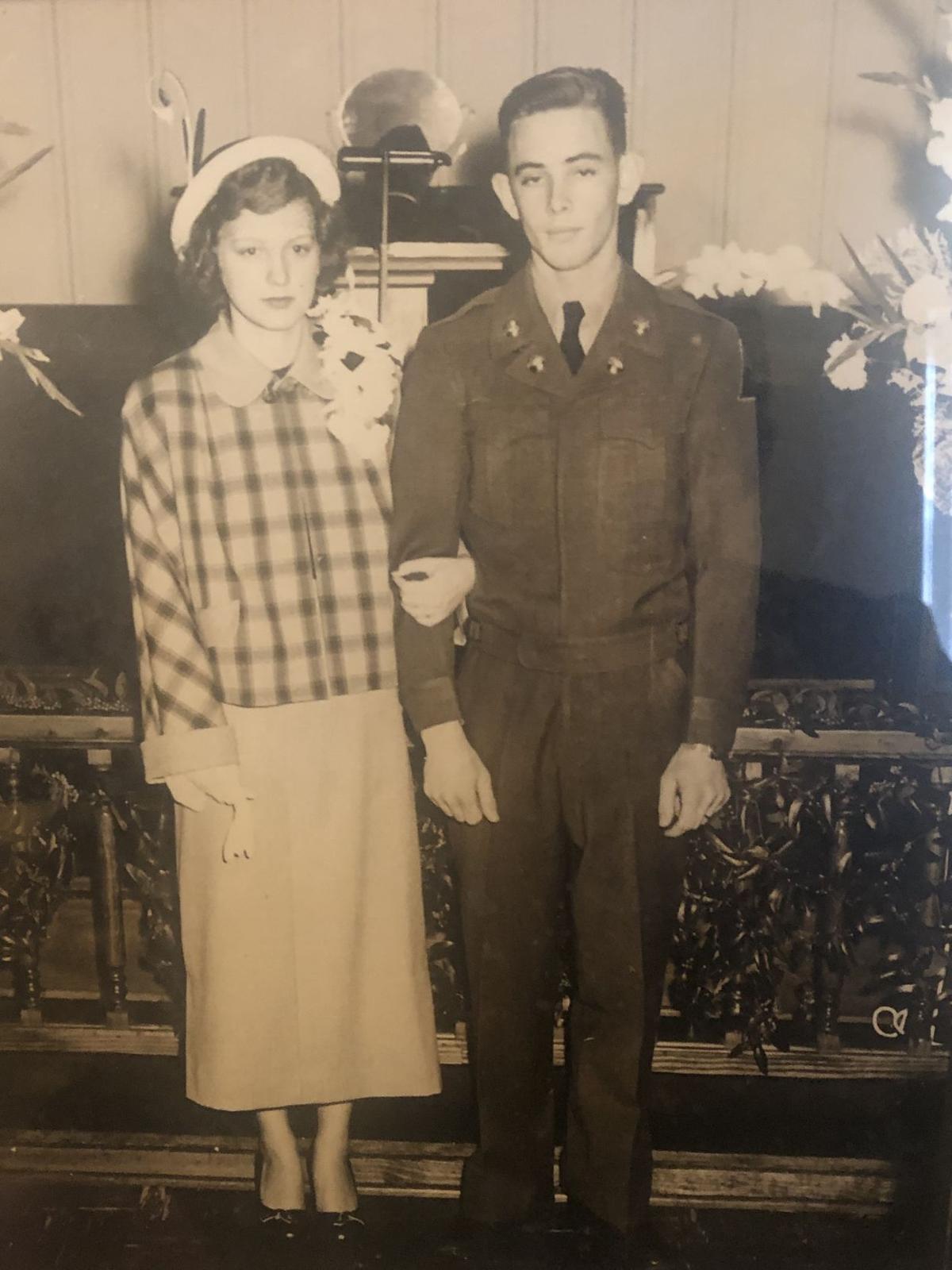 James “Jim” and Robbie “Alline” Fyffe, of Marshall, are shown on their wedding day, Feb. 12, 1950, at Grange Hall United Methodist Church. The couple is now celebrating 70 years of marriage. 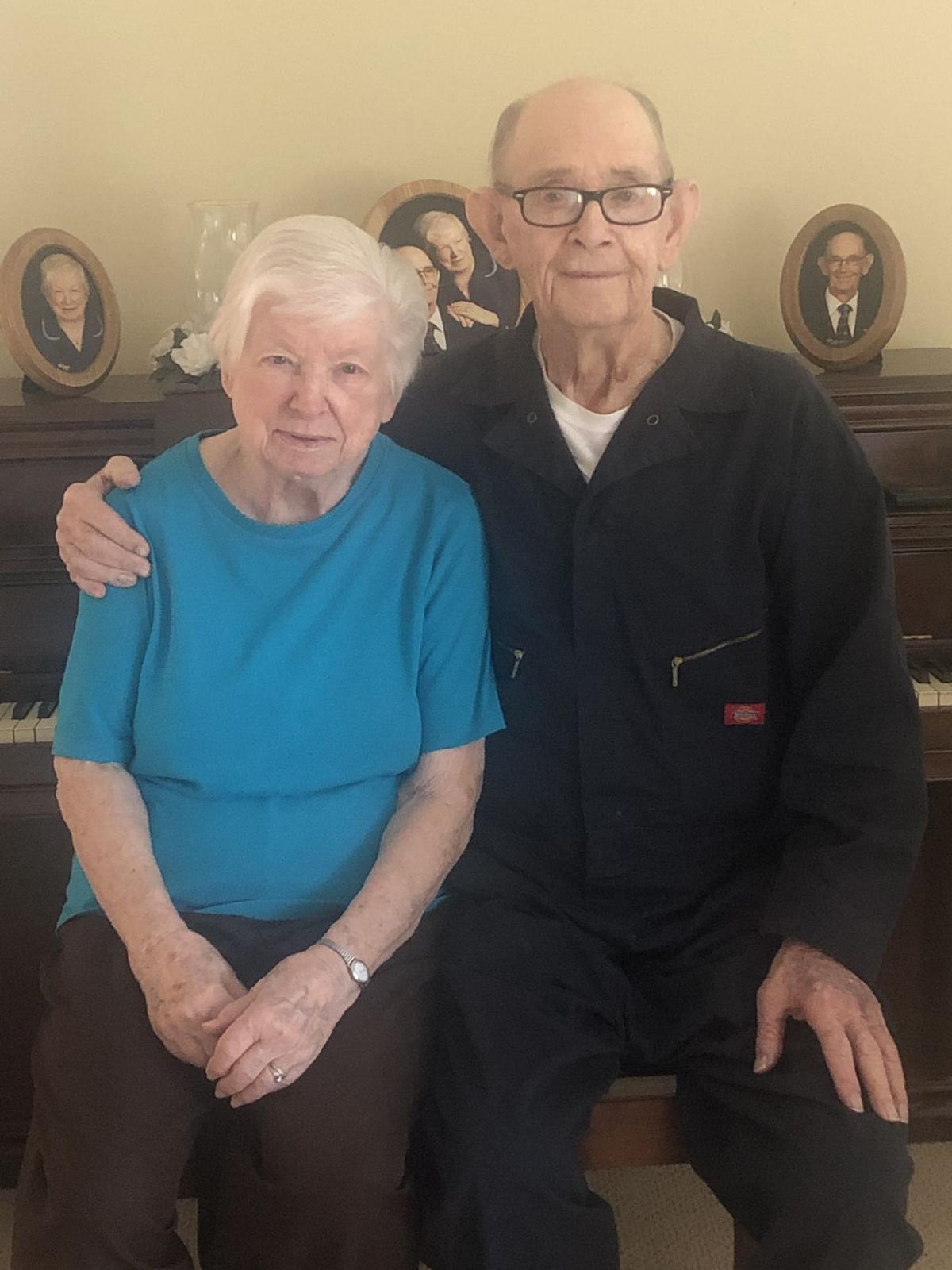 James “Jim” and Robbie “Alline” Fyffe, of Marshall, pose in their home after celebrating their 70th wedding anniversary, which was Feb. 12. 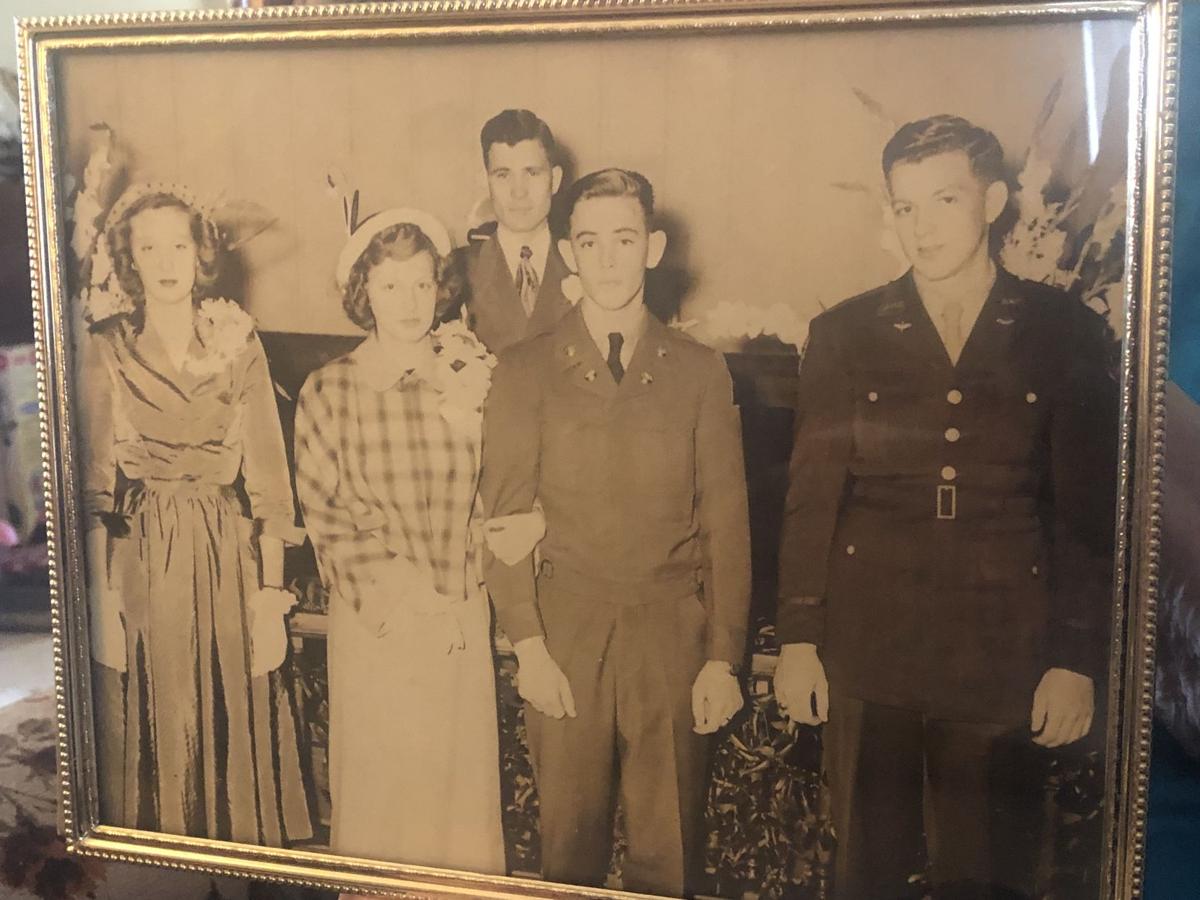 James “Jim” and Robbie “Alline” Fyffe, of Marshall, are shown on their wedding day, Feb. 12, 1950, at Grange Hall United Methodist Church. The couple is now celebrating 70 years of marriage.Standing with them is Mrs. Fyffe's brother and friend. Behind them is Minister Ed Robb Jr., who officiated the ceremony. 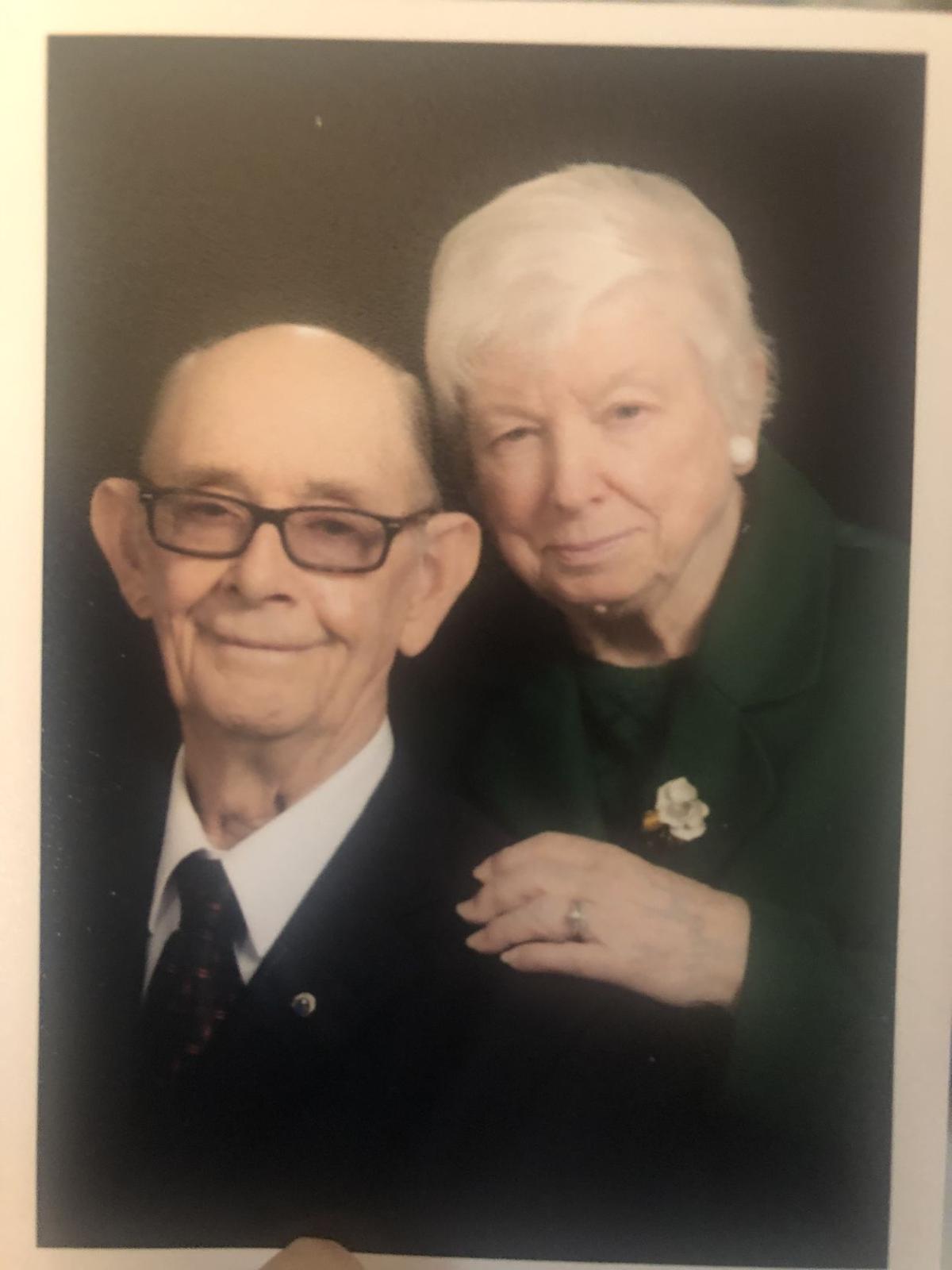 James “Jim” and Robbie “Alline” Fyffe, of Marshall, pose in one of their church photos. The couple recently celebrated 70 years of marriage on Feb. 12.

James “Jim” and Robbie “Alline” Fyffe, of Marshall, are shown on their wedding day, Feb. 12, 1950, at Grange Hall United Methodist Church. The couple is now celebrating 70 years of marriage.

James “Jim” and Robbie “Alline” Fyffe, of Marshall, pose in their home after celebrating their 70th wedding anniversary, which was Feb. 12.

James “Jim” and Robbie “Alline” Fyffe, of Marshall, are shown on their wedding day, Feb. 12, 1950, at Grange Hall United Methodist Church. The couple is now celebrating 70 years of marriage.Standing with them is Mrs. Fyffe's brother and friend. Behind them is Minister Ed Robb Jr., who officiated the ceremony.

James “Jim” and Robbie “Alline” Fyffe, of Marshall, pose in one of their church photos. The couple recently celebrated 70 years of marriage on Feb. 12.

Love is in the air.

And for James “Jim” and Robbie “Alline” Fyffe, it’s been seven decades strong as they celebrated their 70th wedding anniversary on Wednesday

“Love is one of the main things,” Mrs. Fyffe said of what’s made their marriage stand the test of time.

“And friendship,” she added.

“There is a friendship that develops between two people that will, along with God’s help, get you through anything that comes along — good times, bad times — whatever,” Mrs. Fyffe said.

Their faith has also been a great foundation for their love.

In fact, church was where the two met as 7 and 8 year olds, at Grange Hall United Methodist Church, 90-year-old James Fyffe remembers. 89-year-old Alline Fyffe said it may be younger than that. The two were practically neighbors, growing up off Rosborough Springs, on State Highway 43, in Marshall. But, it was at church where they developed a friendship, which eventually turned into an unofficial courtship as teens.

“We were in the church. We were going to MYF (Methodist Youth Fellowship) meetings and little churches all around here; and in ’47, I bought a car, and I would take the children to the church to all these little places and everything and her and her brother were going with me, (along with) my brother and cousins,” Mr. Fyffe recalled. “So I wasn’t really asking her out; we were just going.”

The two eventually fell in love.

The Fyffes began dating around the time he joined the Army. Mr. Fyffe had joined in October 1948. A job he volunteered to do as a dining room orderly, eventually allowed him to come home every other week.

“Then, I started to going with her, asking her out,” Fyffe chuckled. “And I’d come home and somebody would see me.”

Everyone knew the two were in love. At work, they loved teasing the soon-to-be Mrs. Fyffe about her beau.

“The insurance company would say, ‘Jim is here,’” she recalled.

“They would tell her I was in town,” Fyffe laughed.

Ultimately, “we just decided to get married,” said Mrs. Fyffe.

The two ended up marrying during Fyffe’s transition and 30-day enroute from a camp in Arkansas to Fort Hood.

“We just decided, ‘Heck, we’ll just get married, so we did,” Mrs. Fyffe blushed.

“In fact, neither one of us asked the other one to get married, we just got married,” the groom chortled.

At the time, couples needed a blood test to obtain a marriage license. Mrs. Fyffe made the move to make it happen.

The time was picked “so we wouldn’t interfere with church,” Mrs. Fyffe smiled.

The sudden nuptial came as a surprise to all.

“They done had a shower and everything and given us gifts, so they all figured we were fixing to get married, but there weren’t any dates,” Mr. Fyffe recounted. “Just all of a sudden I was on this route and we decided we’ll just get married.”

Following the ceremony, the couple celebrated their nuptials with a reception at the bride’s parents’ house. After the reception, they headed back to church and then set out to their honeymoon in Hot Springs, Arkansas.

It was an interesting time in history, the Fyffes recall, as Jim was only 20 years old and had to get his mother’s written permission to get hitched.

They get tickled thinking how he could serve in the Army, but needed permission to marry.

“He’d been in the army for two years, but his mother had to sign for him to get married,” Mrs. Fyffe grinned.

The lovebirds united in holy matrimony at Grange Hall, where their bond began. They tied the knot before a congregation of family and friends.

“Being it was on a Sunday morning, people were going to come to church anyhow,” said Mr. Fyffe.

Mrs. Fyffe wore a dainty formal hat, a boxy jacket and corsage for the day.

“At the time we got married, these little boxy jacket suits were the thing,” she smiled, noting hers was navy and gray.

The bride and groom remember it just like it was yesterday, as they decorated the church with white gladiolas, coronations and Stretchberries, for the occasion. Mrs. Fyffe’s brother served as the best man while her friend stood by her side. Bro. Ed Robb Jr. performed the ceremony.

It was a day they’ll never forget as the two made history, being the first couple to marry at the original Grange Hall church building.

To their union, the two bore three adult children – a daughter and two sons.

“They’re (now) all in their 60s,” the couple proudly blushed.

Their children joined them for ice cream and cake at the couple’s home Tuesday, following an afternoon anniversary lunch date at Golden Corral.

The couple has enjoyed marital bliss and cherishes the moments they’ve spent working alongside the church together and traveling.

“We spent our 50th wedding anniversary in the Bahamas,” shared Mr. Fyffe.

The couple revels in working out together, four days a week at the gym. They still enjoy each other’s company, and like lounging in their matching slippers.

“Yes, they are matching,” the two smiled as they fondly kicked up their feet, in sync.

Fyffe worked at Texas Eastman Plant in Longview for 31 years, and spent his retirement doing his favorite pastime, farming. He helped find Marshall’s Farmer’s Market and served as a past president.

Mrs. Fyffe enjoyed a career for several years as a school secretary at Grange Hall Elementary School, before retiring to stay home as a housewife.

They remain not only lovebirds, but true friends.