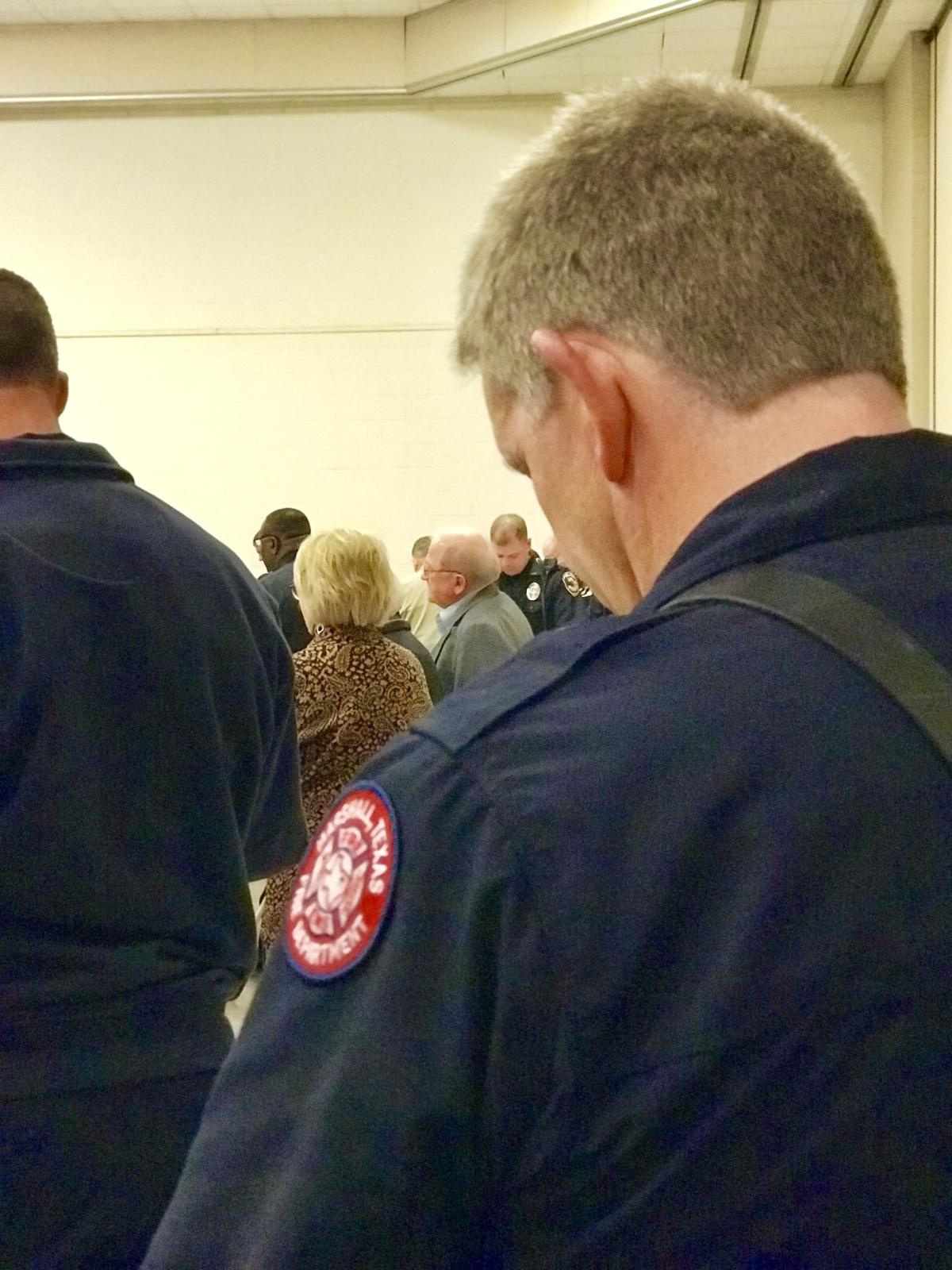 First responders were honored for their service on Saturday during the annual Marshall Prayer Force banquet. 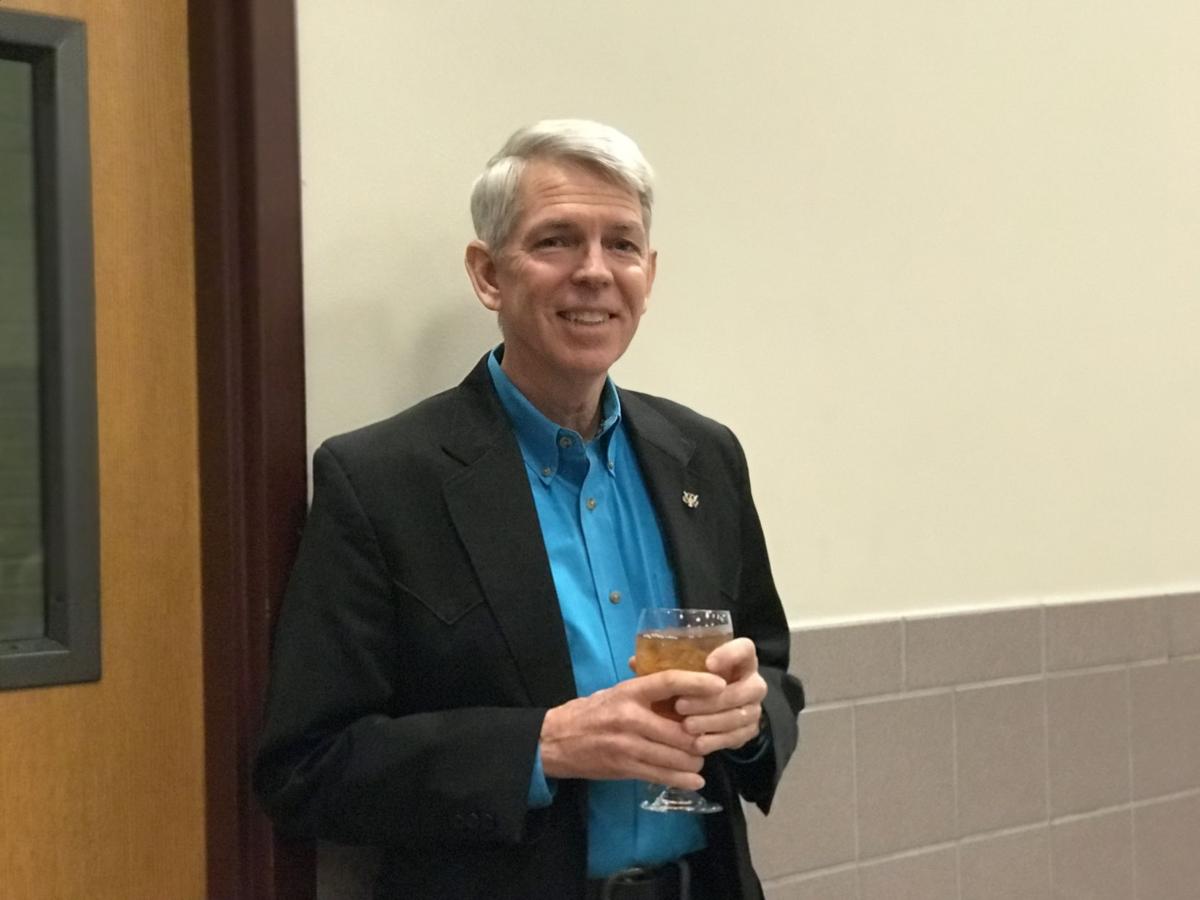 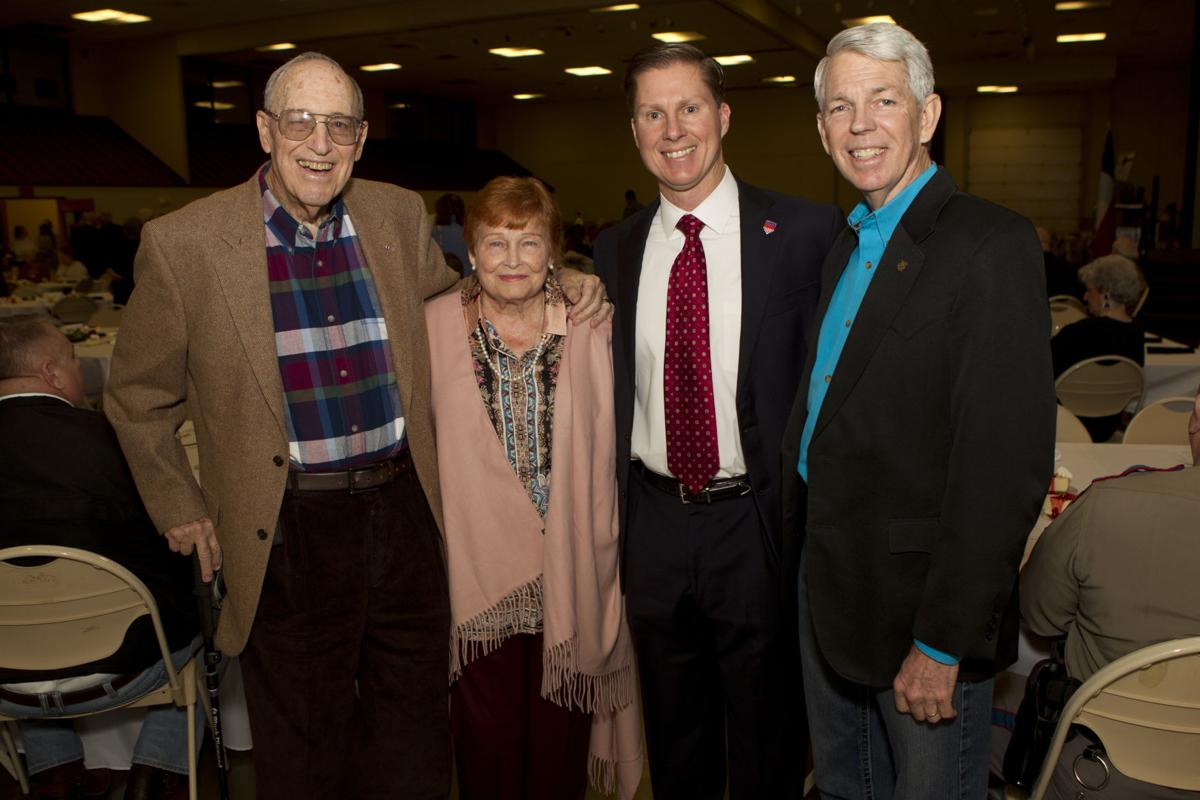 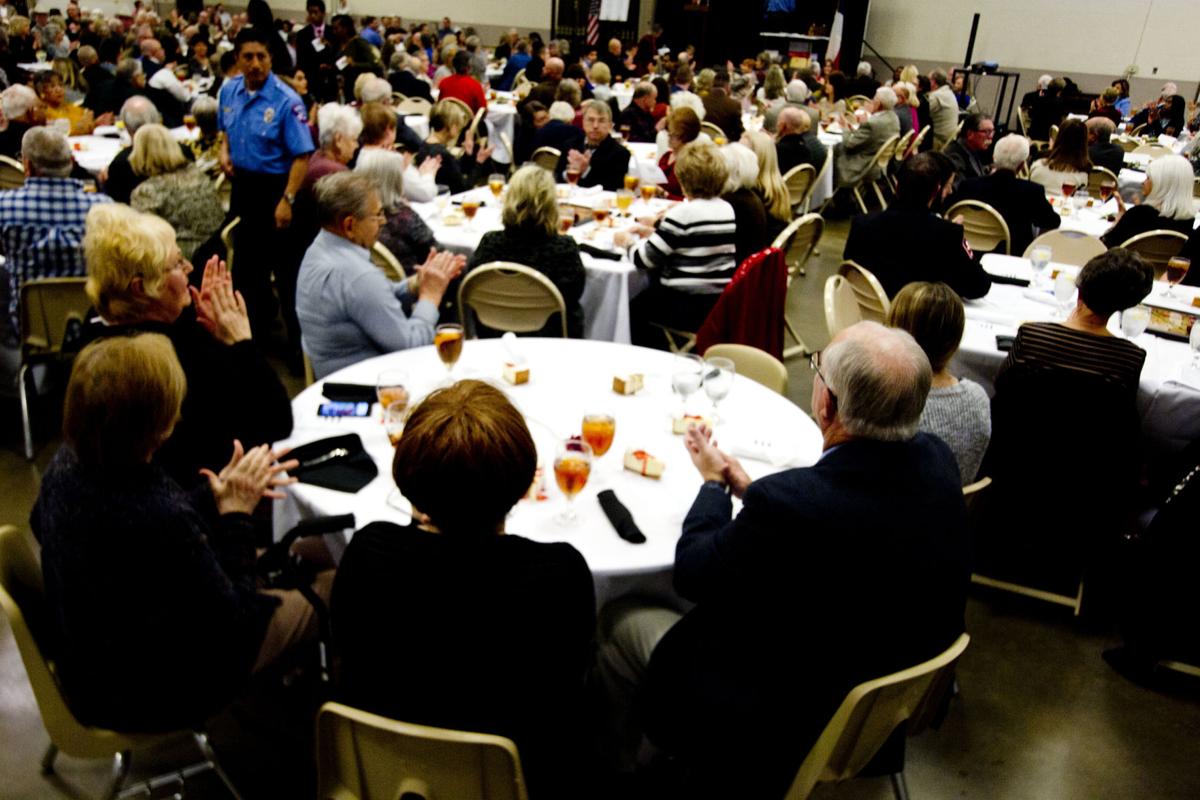 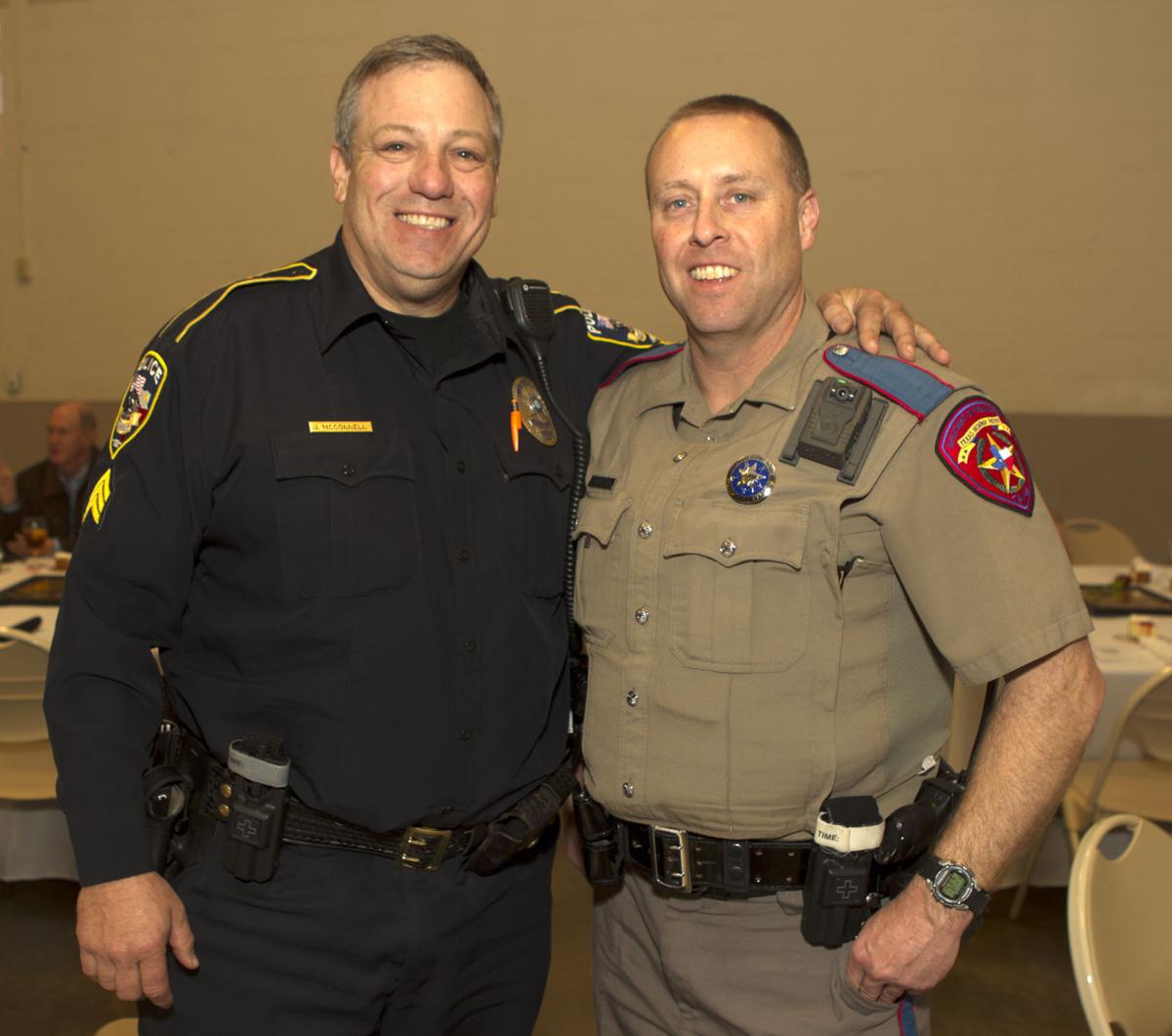 Jamie McConnell of the Marshall Police Department and Jim Hargett of the Texas Highway Patrol attend the Marshall Prayer Force annual celebration at the Marshall Convention Center on Saturday. 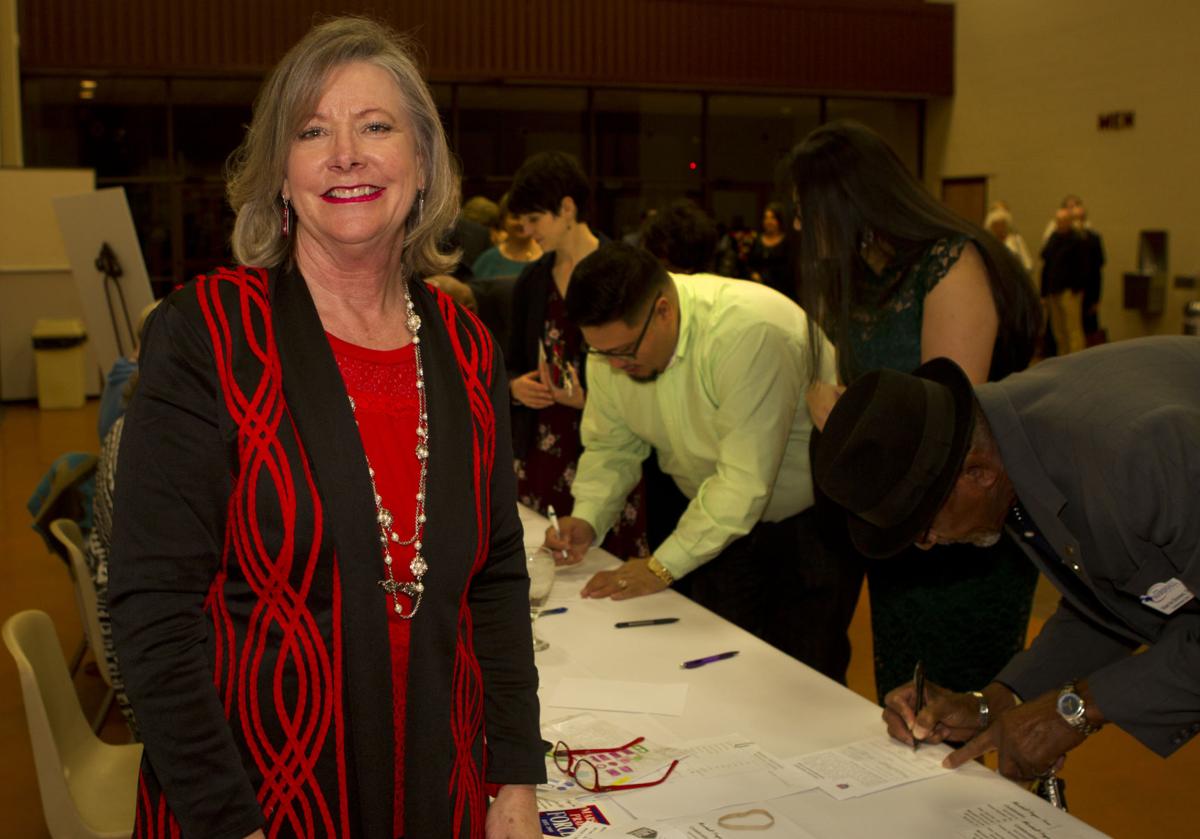 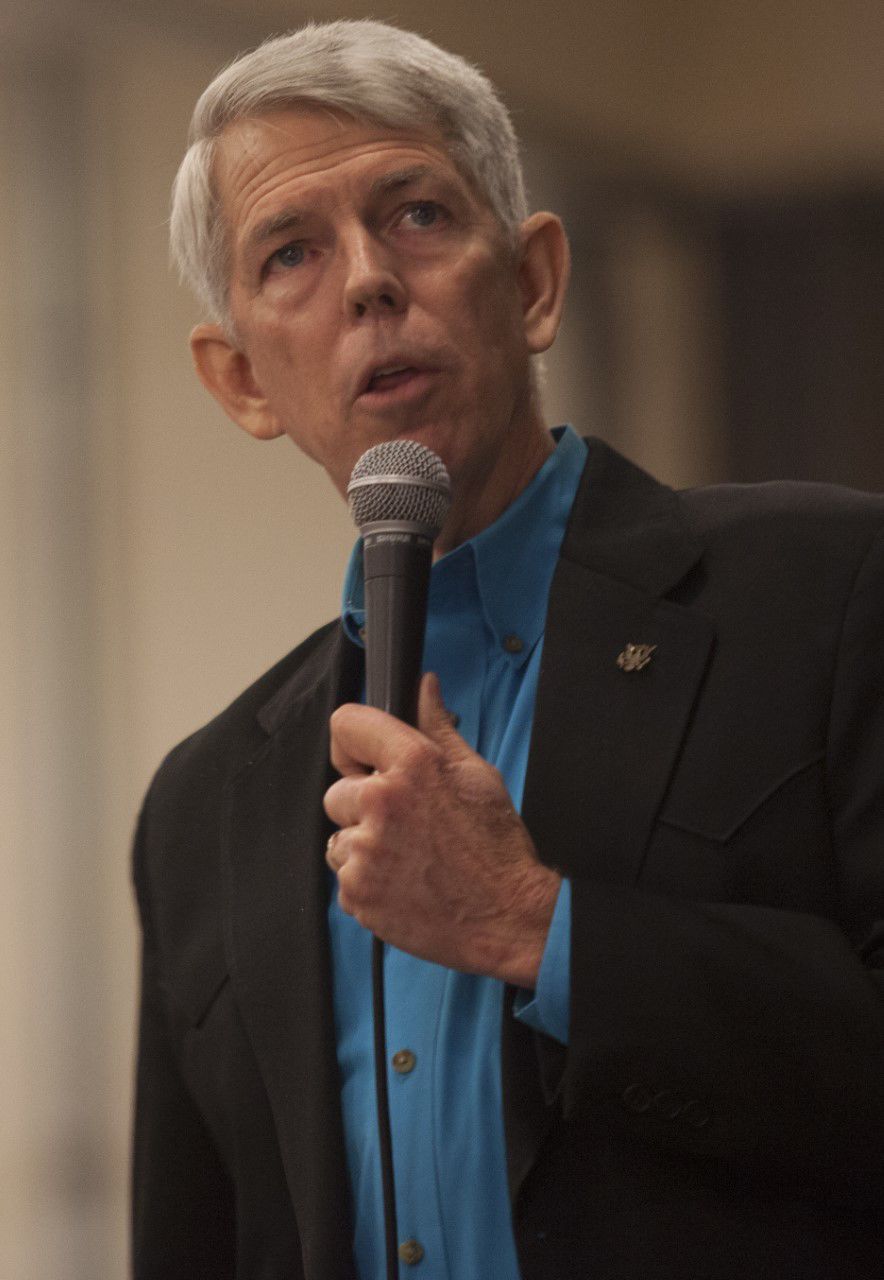 David Barton served as the guest speaker on Saturday during the Marshall Prayer Force banquet.

First responders were honored for their service on Saturday during the annual Marshall Prayer Force banquet.

Jamie McConnell of the Marshall Police Department and Jim Hargett of the Texas Highway Patrol attend the Marshall Prayer Force annual celebration at the Marshall Convention Center on Saturday.

David Barton served as the guest speaker on Saturday during the Marshall Prayer Force banquet.

With more than 500 people in attendance on Saturday, Harrison County Sheriff Tom McCool said this year’s banquet was the largest in the event’s history.

“Congratulations, this is the largest group ever assembled by the Marshall Prayer Force,” McCool said Saturday.

The crowd was made up of first responders who were on hand to thank the prayer warriors for their dedication the past year, as well as new members looking to join in and make a difference.

“Marshall police officers take calls everyday from disturbance calls to homicides and accidents,” Carruth said. “Officers often have to make a split second decision that will later be scrutinized for hours and sometimes it’s a life or death situation. Officers see the best and worst of society while serving to protect the public, keep the peace and be fair and compassionate.”

The three law enforcement leaders agreed that Harrison County first responders would not be able to do the jobs they do without the prayers of the Marshall Prayer Force prayer warriors.

“I love you all. This whole organization was founded on love,” Cooper said. “Each day begins with uncertainties in the life of a firefighter. In every day, every minute and every second, we wait. We wait for that moment when we’re called and then we’re coming — we’re coming into the fire. We fix issues but our day is not over. We carry your situations home with us but with prayer, we press on and continue to do the jobs we love. God gives us the strength and wisdom to do the job.”

McCool agreed with Cooper that sometimes the job is tough but people like the Marshall Prayer Force prayer warriors make it easier.

“Sometimes in law enforcement, we wonder if it’s worth it all. We do it for people like you in the Marshall Prayer Force,” McCool said.

Major General Vernon Lewis Jr. introduced this year’s guest speaker David Barton on Saturday by saying he is one of the most influential Christian speakers of today.

“Words will not describe David Barton,” Lewis said on Saturday. “He has written more than 30 books and spoken to more than 1,000 legislators talking about Christian issues. He speaks to more than 400 groups a year and he’s got half a dozen honorary PhDs. He also runs the 10th Amendment Committee.”

Barton is the founder of WallBuilders, a Texas-based organization that presents the nation’s history with an emphasis on Christianity throughout historical events — something Barton outlined specifically in his talk on Saturday.

“This is a night covered in prayer. We’ve been praying for our first responders throughout the year. Doing that, I thought it would be appropriate to look back at prayer historically and look at the effect of the prayer on a previous time.

Looking at history of prayer in America, prayer is the key thing here. This is Providential History. It’s history showing what God did. Does God get involved in history? Does he answer prayer? Does he get involved when we pray? The answer is yes.”

Barton then took the audience on a journey through America’s history, from the American Revolution, Civil War, War World I and II, D-Day, the Battle of the Bulge and beyond and how prayer moved God to act in each of those historical milestones.

“You’ll see things in history and they’re going one direction then all of a sudden they’ll swerve and it’s like, ‘Where did that come from?’ It’s God’s Divine hand. God has a result he wants to accomplish, a plan he wants done,” Barton said. “When we look at history, there’s a lot of things that don’t make sense but that’s because of God’s Divine hand. God has a plan.”

Barton outlined instances such as the American forces’ retreat from Long Island during the American Revolution when George Washington’s troops were badly outnumbered by British forces and surrounded.

First the British remarkably sat for two days without movement rather than ending their cornered enemy, allowing the American forces time to find a retreat.

Then, aided by a storm and then a heavy fog, both at the perfect times, Barton said the forces were allowed to safely retreat across the river to fight another day.

Barton then mentioned other times in history like when a winning Confederate general in the Civil War suddenly forgot to send more ammo to his troops on the front lines, thereby allowing the Union Army their first and most needed win.

Next was the death of Confederate General Stonewall Jackson, a brilliant strategist who had not lost a single battle yet was suddenly shot by his own soldier while returning to camp, thereby boosting the Union forces’ efforts in future battles.

“What was God up to? You can see God’s Divine Hand and purpose throughout history,” he said. “History is now one of the most boring classes for kids in school because it has no meaning because we can’t show what God is up to and how God intervened. We’ve lost the story aspect of it and kids don’t understand the meaning of history.”

Barton said God’s interventions all throughout history were all spurred on by prayer from his people.

“God has a purpose and all of this stuff happens because God wills it. This is why prayer becomes so significant,” he said. “Prayer makes a different, especially when God has a specific agenda he wants to achieve, he just needs his people to pray to release him to accomplish those things.”

To learn more about Barton, visit his website at https://wallbuilders.com/

To learn more about the Marshall Prayer Force, visit their website at https://usaprayerforces.org/marshall-prayer-force