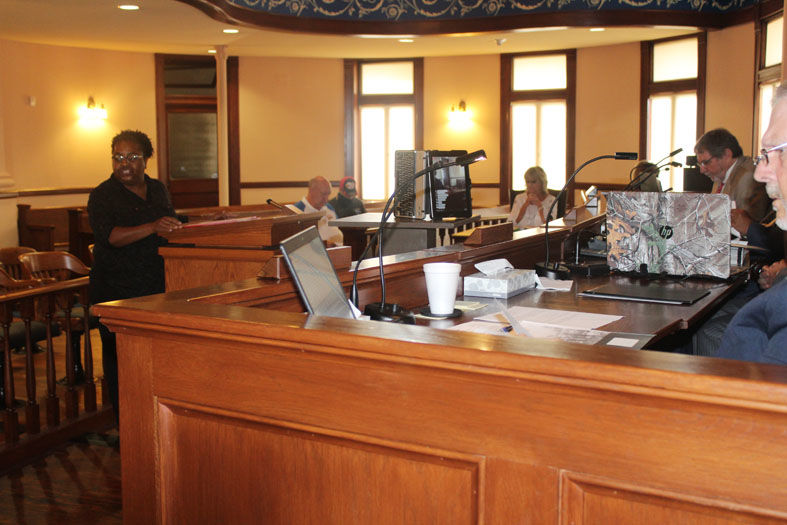 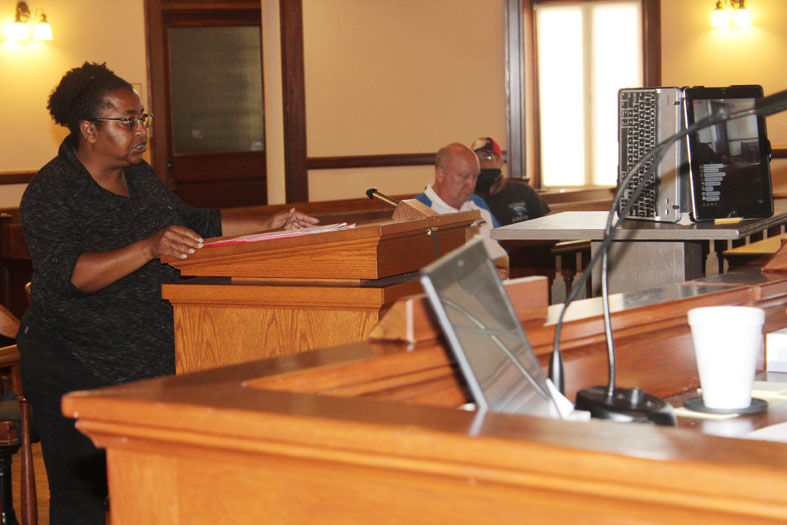 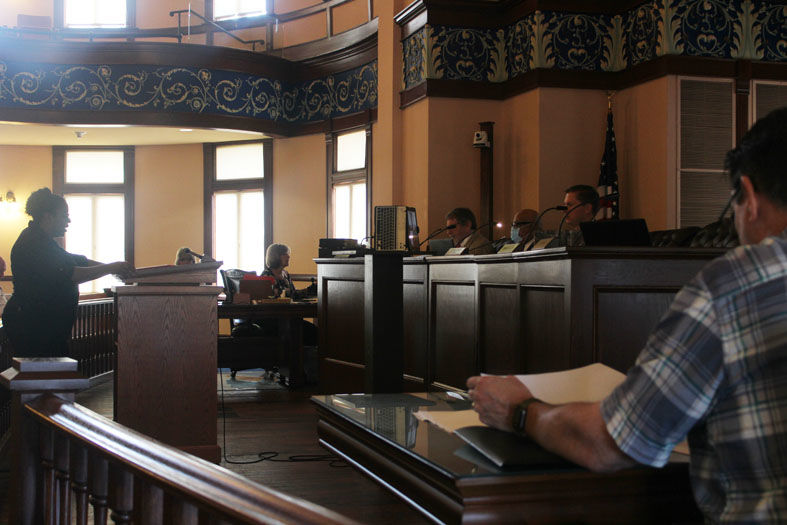 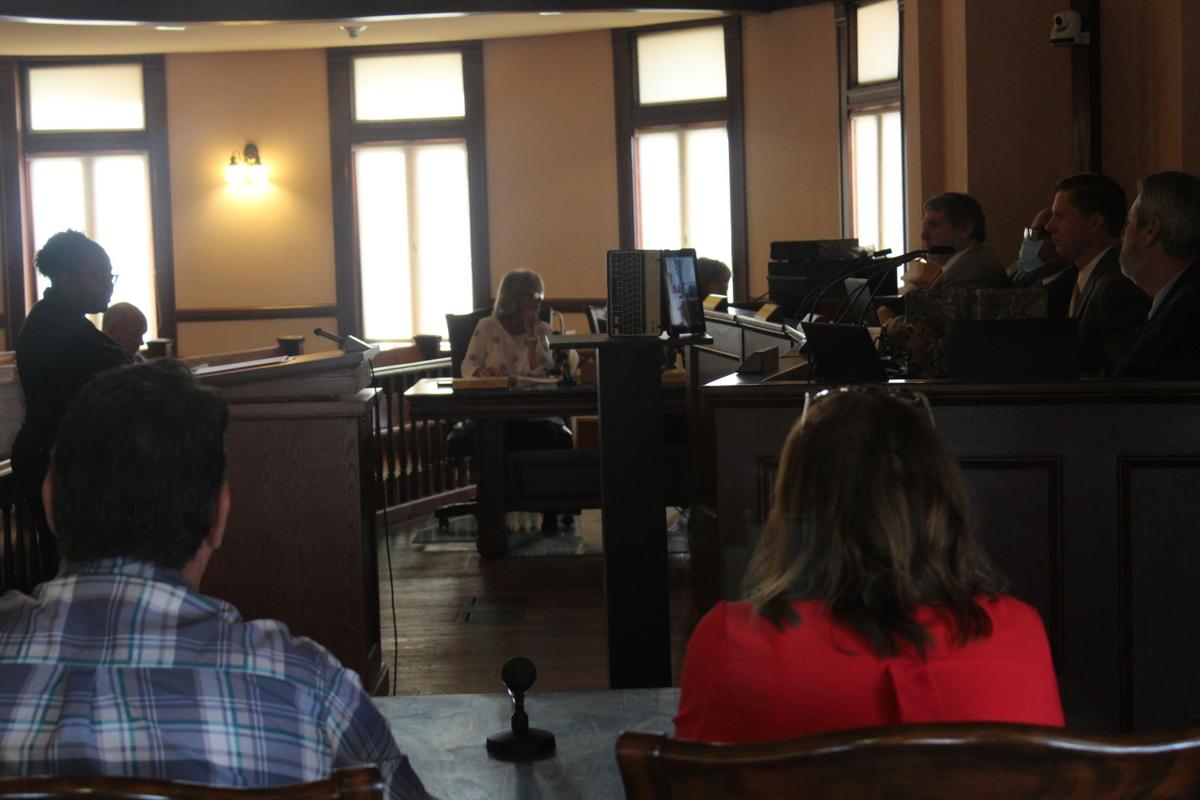 Marshall Against Violence president Demetria McFarland, who launched a petition to remove the Confederate statue on the historic 1901 courthouse grounds, took her campaign before the Harrison County Commissioners Court, on Wednesday.

“I am here peacefully asking for the Confederate statue to be removed from the courthouse grounds,” McFarland told the court.

The MAV leader spoke during the public comment portion of the meeting, which befittingly came right after County Judge Chad Sims offered prayer over race relations and racial tensions felt not only in the county, but the entire nation.

“We ask you, Lord, to heal our land. We need your direction,” Judge Sims prayed.

Opening up the public comment portion of the meeting, the judge noted that since McFarland requested to be on the agenda for public comment, no one would be able to respond.

In her presentation, McFarland said she’s asking for the statue to be removed from the public’s eye because it’s a painful reminder, to particularly African Americans, of America’s dark history of racism and slavery.

“This nation is experiencing a movement after the senseless murder of George Floyd due to systemic racism,” said McFarland.

Floyd, a 46-year-old unarmed black man died May 25 when a white Minneapolis, Minnesota police officer pressed his knee to his neck for eight minutes and 46 seconds, despite Floyd’s outcry for relief.

The death, caught on video, prompted outrage across the country regarding the alarming number of deaths of unarmed black citizens killed at the hands of police.

Communities across the nation are now starting to call for the removal of Confederacy symbols, in the wake of protests over the May 25 officer-involved killing.

“This is something I saw personally as I went to Minneapolis, Minnesota this weekend to see where Mr. Floyd took his last breath,” McFarland told the court. “From the nation’s capital, throughout the world, local officials and protesters are removing symbols of racism, hate and prejudice by taking down the symbols of the Confederacy.

“I’m curious and I do wonder if those in authority, here at this courthouse, also believe in what the Confederacy represents due to the camera that has been placed on the side of this building, a public building, in order to keep a watchful eye upon their idol, the Confederate statue,” she said.

Quoting Daniel Barber of Lakewood, Colorado, McFarland argued that the Confederate States of America stood for two basic principles, as laid out in its own constitution of 1861.

“First, it stood for a dis-union of the United States. Second, it stood for an official establishment of slavery based on race,” said McFarland. “This is a matter of historical fact. Simply stated, the Confederacy was a treasonous and racist institution.

“Therefore, any statue or monument honoring the Confederacy endorses treason and racism. And the people who defend those monuments should think carefully about which flag they want to support — the stars and bars or the stars and stripes. You couldn’t have it both ways then, and still can’t.”

McFarland said, as an African American woman, she should not be reminded of the struggles her ancestors faced while visiting downtown. She said the statue doesn’t represent all communities and races that make up the city of Marshall.

“Again, the Confederacy represents only one race — the white race — one of which they felt was supreme,” she said.

McFarland said the statue seems to mean more to those who are choosing to embrace what it represents than the life of a Black man.

“Could this be the reason why society is seeing the repetition of taught racism, teaching children and grandchildren of the hatred this statue represents — and that is white supremacy,” she questioned.

McFarland said the statue is a reminder of torture and the dehumanization that her ancestors were subject to as well as what unfolded with the death of Floyd.

“Lynching that’s exactly what it was,” she said of Floyd’s death. “It went from placing a noose around the necks of Black men and women to placing a knee on their necks.”

McFarland ended her presentation sharing several photos of civil rights monuments and sites that she’s documented from her travels around the country.

One is picture of Brown v. Board of Education National Historic Site, which was established in Topeka, Kansas, to commemorate the momentous U.S. Supreme Court decision to end segregation in public schools.

Another was a picture of the National Memorial for Peace and Justice, also called the National Lynching Memorial, which was established to remember the nation’s lynching victims.

She also showed a photo of the Little Rock Nine Monument that’s showcased on the grounds of the Arkansas State Capitol to honor the courage of the nine Black students who enrolled at Little Rock Central High School to integrate the city’s public schools in 1957.

“These images represent the perseverance my ancestors endured and what they fought for and believed — not for one race, but all races,” said McFarland.

She implored the court to consider relocating the statue to possibly a museum or historic cemetery to be honored by those who wish to honor it.

“Personally, those that are here to oppose my request, as far as I’m concerned you can move that Confederate statue to your backyard,” McFarland said, turning to address any possible opponents in attendance.

“That way, you can embrace it and what it stands for in the comfort of your own home,” she said.

McFarland reiterated her request to those in authority, asking them to please be mindful of those that have lost loved ones due to systemic racism, by removing the Confederate statue.

“This nation is in the process of removing the Confederate statue; it’s removing the symbols of Confederacy, of hate, racism, racial inequality,” said McFarland. “Let’s move forward.

“I implore you, help us to heal,” she continued. “Help this city to move forward towards racial equality. Take down a statue, which represents racial division and show us that you are willing to move along with the rest of the nation by promoting racial equality.”

Acknowledging arguments from opponents who see Confederate monuments as a symbol of heritage and history, McFarland said it will always be a reminder of slavery and the legacy of white supremacy.

“It doesn’t matter how one tries to promote Confederacy. It will forever represent hate, racism and prejudice,” she said.