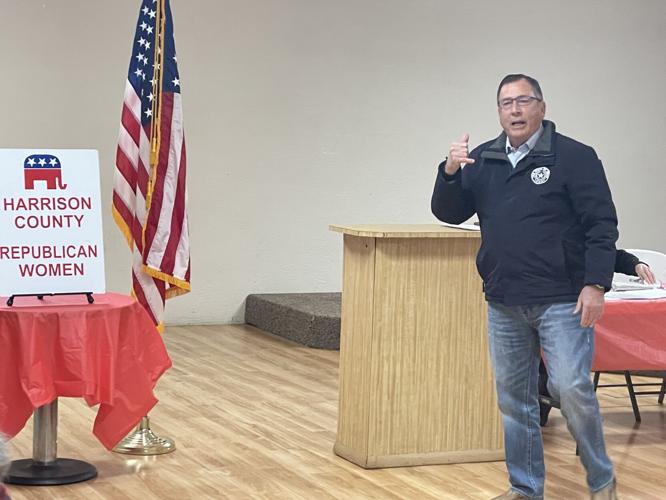 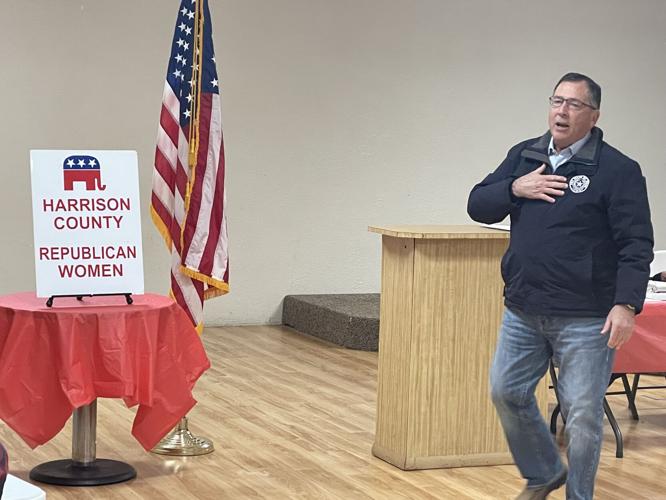 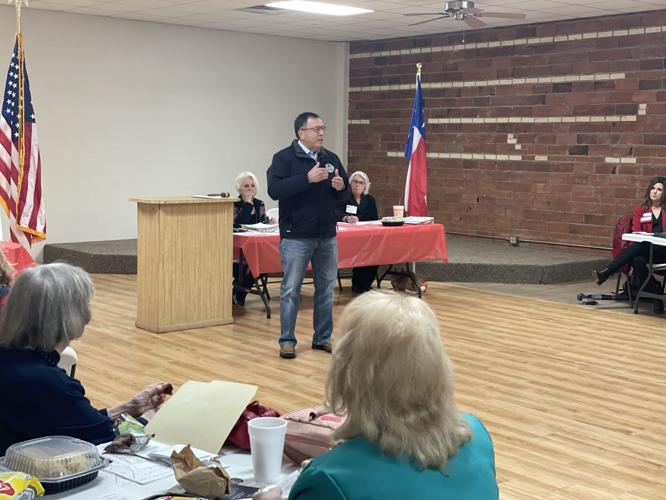 Harrison County Republican Women introduced on Friday House District 7 State Representative Jay Dean, the new legislator for the area, as he served as guest speaker at the auxiliary’s monthly luncheon.

“It’s good to see some old friends, and yet some new friends,” Dean said as he addressed members of the local Republican Party and the surrounding area.

Dean, R-Longview, will serve a fourth term representing House District 7 after drawing no opponents, Republican or Democrat, for the March primary.

While House District 7 is currently comprised of Gregg and Upshur counties, newly drawn maps have added Marion and Harrison to the district. The change will take effect following the November election.

Dean, who is a former city councilman and former mayor for the city of Longview, said he’s excited to represent his newly-redistricted area.

“What’s exciting to me mostly is I kind of look at this as an opportunity to turn a page,” said Dean. “I’m excited about the opportunity that we have in Harrison County to really bring people together, look at some of the common issues that you have and formulate plans on how to address those issues.”

Addressing the intra-party feuding that’s been ongoing within the local party, Dean called for unity. To encourage unity, he admonished them to start as a local party by working together.

“I want to talk to you and be involved with you on bringing unity,” he added. “We’re no different here than any other county. Everybody got this, every now and then, this fussing and feuding going on. It’s OK, but when the lady sings, we [have to] all be singing together.”

Dean thanked all for their support as he embarks on his fourth term.

“By the grace of God and with your help, we thank you. We’re going to go to Austin for a fourth term,” he said. “It’s about working with people. You try to come up with things that are important to us.”

Dean noted he strives to do what’s in the best interest of rural areas, particularly when it comes to challenges the areas face with larger cities.

“If Dallas owns our water, guess what? Where do you think these major economic development projects are going to end up going? So we have to work really hard as a rural region in order for us to fight back, from the numbers that they are going to have in the next coming legislature,” said Dean.

“As a representative, what’s very important to me is having members of our Republican parties working closely with us, to help us to identify issues before we actually go to Austin,” the state representative said.

With that said, he encouraged party members to join him in working diligently for the betterment of the region.

“We have the opportunity for the upcoming summertime where you’re going to get together as a party for the whole state,” he said, referring to the 2022 State Convention, slated for June. “Let’s be prepared to go down and present what we truly feel, as a complete party, is important to us in our region. If we go down there collectively and unified behind issues, it’s hard to beat us.”

And as state representative, Dean realizes he may be challenged on his position on certain issues, but it’s all about maintaining good communication, he said.

“My job in this relationship is to convince you of my position on a certain issue. And your responsibility is to show me why I’m wrong and I will assure you that if you convince me that I’m wrong, I’m man enough to fess up and say OK. But it’s to have good, solid communication and not have this aggressive, mean-spirited conversation,” he said, getting an “Amen.”

As state representative, Dean said he plans to conduct town hall meetings to gauge the issues that are important to constituents. Economic development is one of his personal priorities, he noted. He applauded Harrison County for the strides that the county has made thus far.

“Y’all have been very successful already, but there’s more we can do,” said Dean. “Our job is to look at those opportunities, then it becomes my job to go down and convince the governor’s office why our project is so important, and we want jobs.”

He said if his district views things from a regional perspective, it will be more productive in getting things done.

Explaining the process of proposed bills becoming law, Dean said it’s important to have good communication with the party throughout the process in order to pass legislation that’s good for the region.

Dean said it’s about keeping the future generation in mind as well, and the types of job opportunities that are going to be available for them to pursue.

“Each representative’s number one responsibility is to the district,” said Dean. “By the grace of God, I enjoy representing people, but I enjoy serving. I’m sure not doing this to make a living or to make a name or to be popular. It’s about what is it that we can for our region that’s going to make the quality of life for our region better.”

“I’m excited about being your representative,” he added. “This is a new chapter for me, and I’d be really proud and humbled if you’d look it as a new opportunity for you.”

“We want to see double the amount of people in here. We get things done through numbers, numbers of people that want to come here and help us recruit,” he said. “It’s a lot of Democrats that are absolutely sick and tired of what’s going on. We need to go find them. We’re a melting pot here. That’s what we’re about. Come join with us.”

As the area’s new state representative, he said all he asks is for constituents to work with his administration.

“We just ask you to work with us — and most importantly, to work together,” said Dean. “Let’s start fresh. Let’s start working together on things that are going to be good for not only Harrison County, but for our region.”

Robin Y. Richardson is an award winning print journalist, serving as the county government and courts reporter. She earned her journalism degree from TSU and master's from LSUS. She is the proud mother of one daughter.