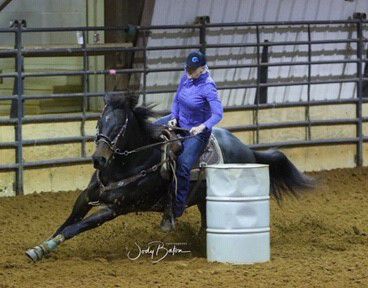 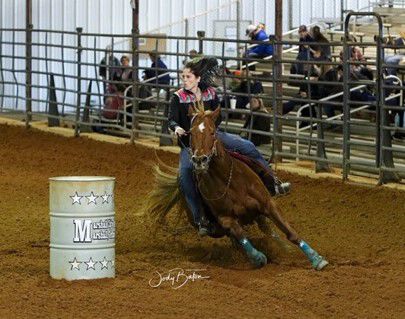 The New Year’s Celebration $2,500 Added Barrel Race was held Jan. 3 and 4 at the Marshall City Arena.

The equine event was the first race for the 2020 riding season at Marshall City Arena and was produced by Martha Reyenga of 2HEARTSbarrelracing — named the 2017 Better Barrel Races Producer of the Year.

The two day barrel racing event drew equine enthusiasts from a five state area and saw 325 training runs, including 443 that ran for a money payout.

On Jan. 3, Kathleen Partain of Bullard was the fastest timed event winner with her horse, Shrek.

“Shrek and I have been working on the barrel racing thing for 11 years,” Partain said. “I bought him as a four-year-old with no training or experience in barrel racing, and so it began. I have had great help with his training along the way and, as the years have gone by, we have had our successes; however, the former successes pale in comparison to our accomplishments at the New Year’s Celebration barrel race. Placing first in the 1D at a 185 plus barrel race is a first for Shrek and I. Also, winning second in the average for the two-days. This win gives me the assurance that it is possible for me to fill my WPRA permit, which is a goal of mine.”

“My daddy loves a good horse sale,” Lowery said. “It’s been a running joke in the family how he can’t keep his hand down at a horse sale. In 2012, my dad had bought a horse in a South Dakota sale and made arrangements to pick him up at the 6666 Ranch. It just so happened to be while the 6666 was having their annual horse sale. Coincidence? So he comes home with two horses instead of one. Fast forwarding to 2020 and Rosie — Stoli Chick — is the only horse I have kept. The New Year Celebration Barrel Race was our first run of the year and it brought us my first win in Marshall. I have never won a race there before and when I saw my time I was so excited.”

Reyenga and 2HEARTSbarrelracing will be back at the Marshall City Arena on April 9-11, for the “I’m Eggstraspecial Too!” and from June 26-28, with the “July Explosion.”

Admission is always free to the public and concessions are available.

“If you enjoy watching an equine event, Marshall City Arena is the place to be,” Reyenga said.