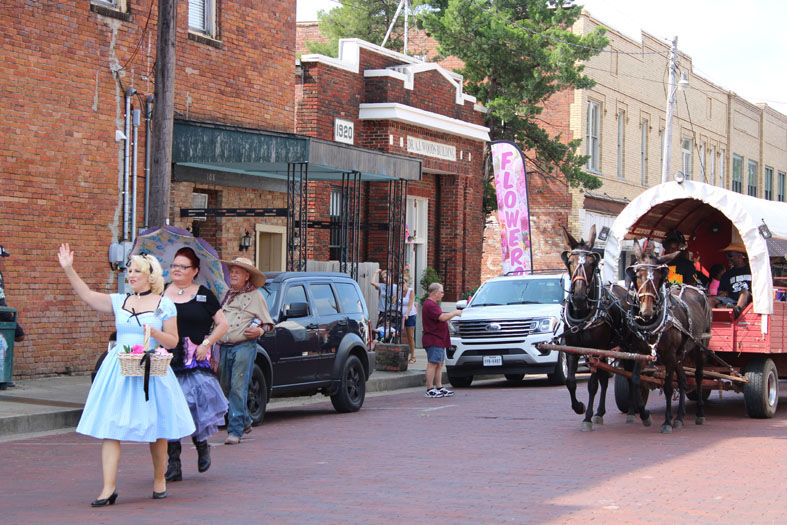 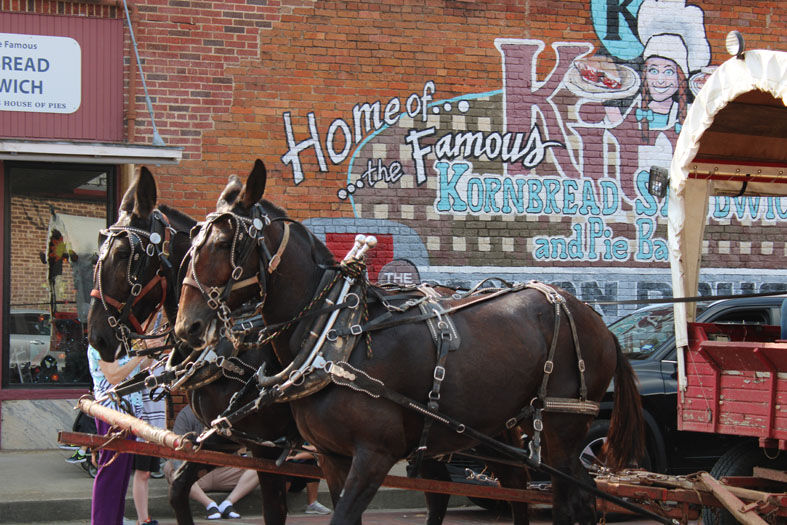 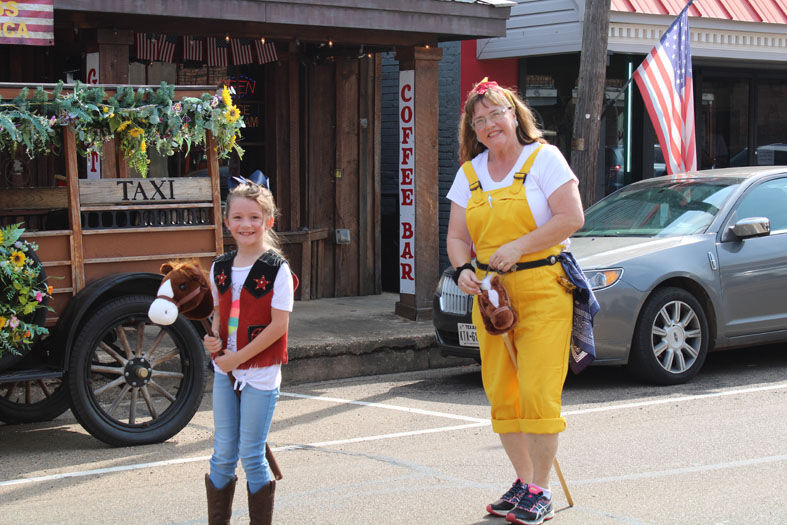 At right, Ann Tijerina, of Marshall, and her granddaughter join in the fun at the inaugural Pioneer Days Festival parade, hosted in downtown Jefferson Saturday by the Opera House Theatre Players. 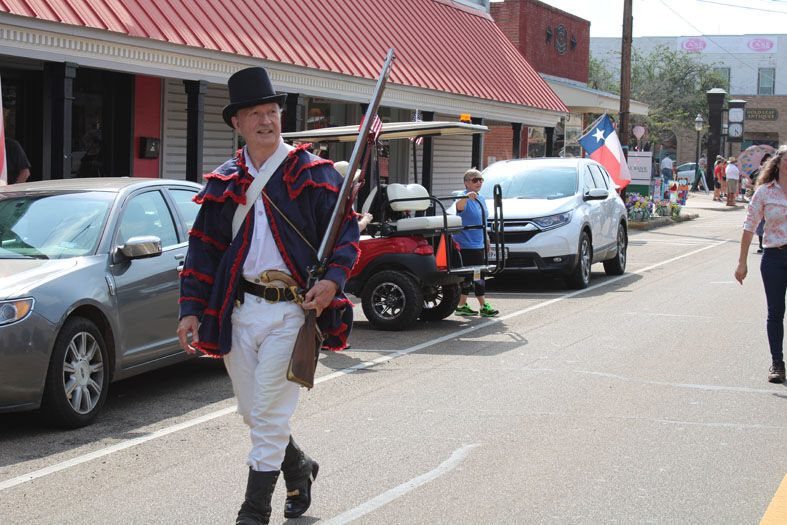 Joining the parade the first annual Pioneer Days Festival parade, hosted in downtown Jefferson Saturday by the Opera House Theatre Players, was local resident, Howard Blatch, who wore an exact replica uniform worn on the Lewis and Clark Expedition that commenced in 1803 to explore the New Louisiana Purchase. 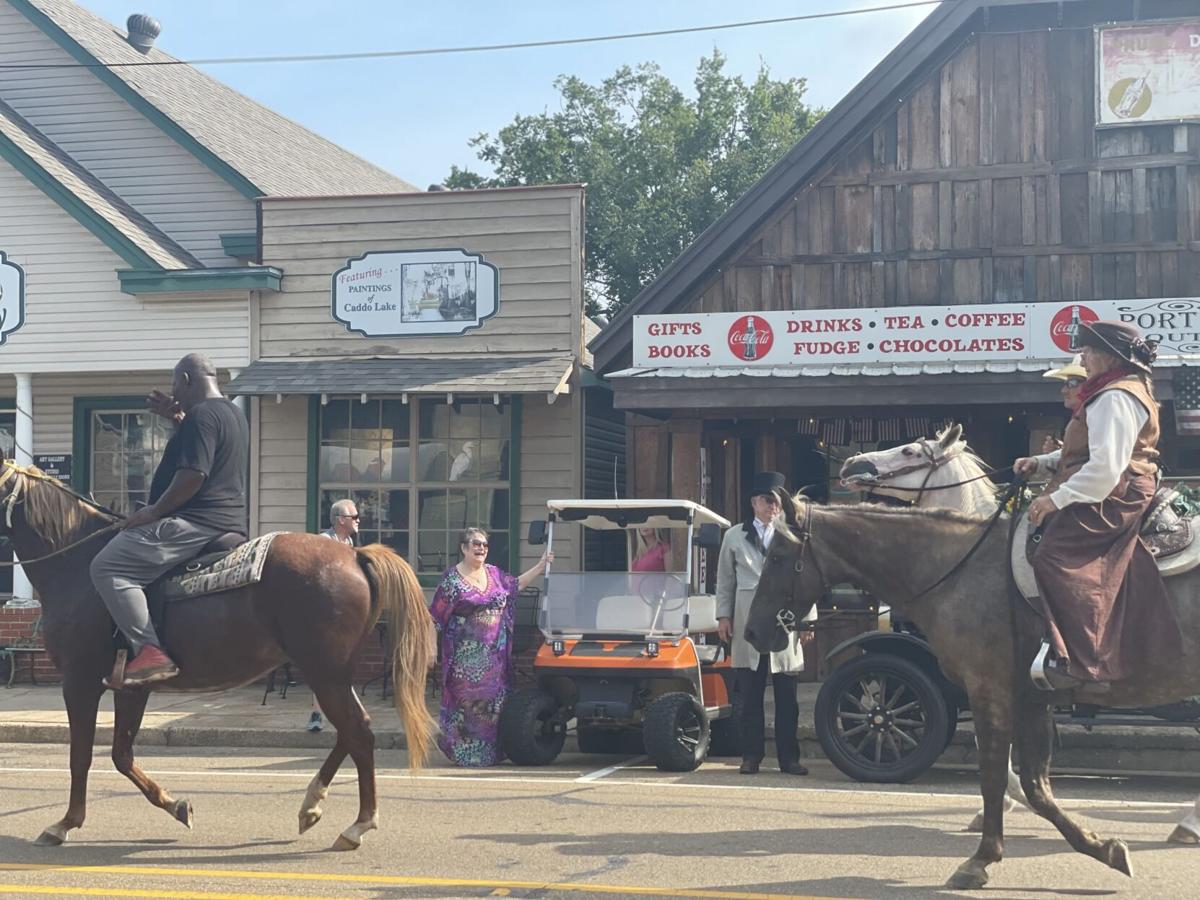 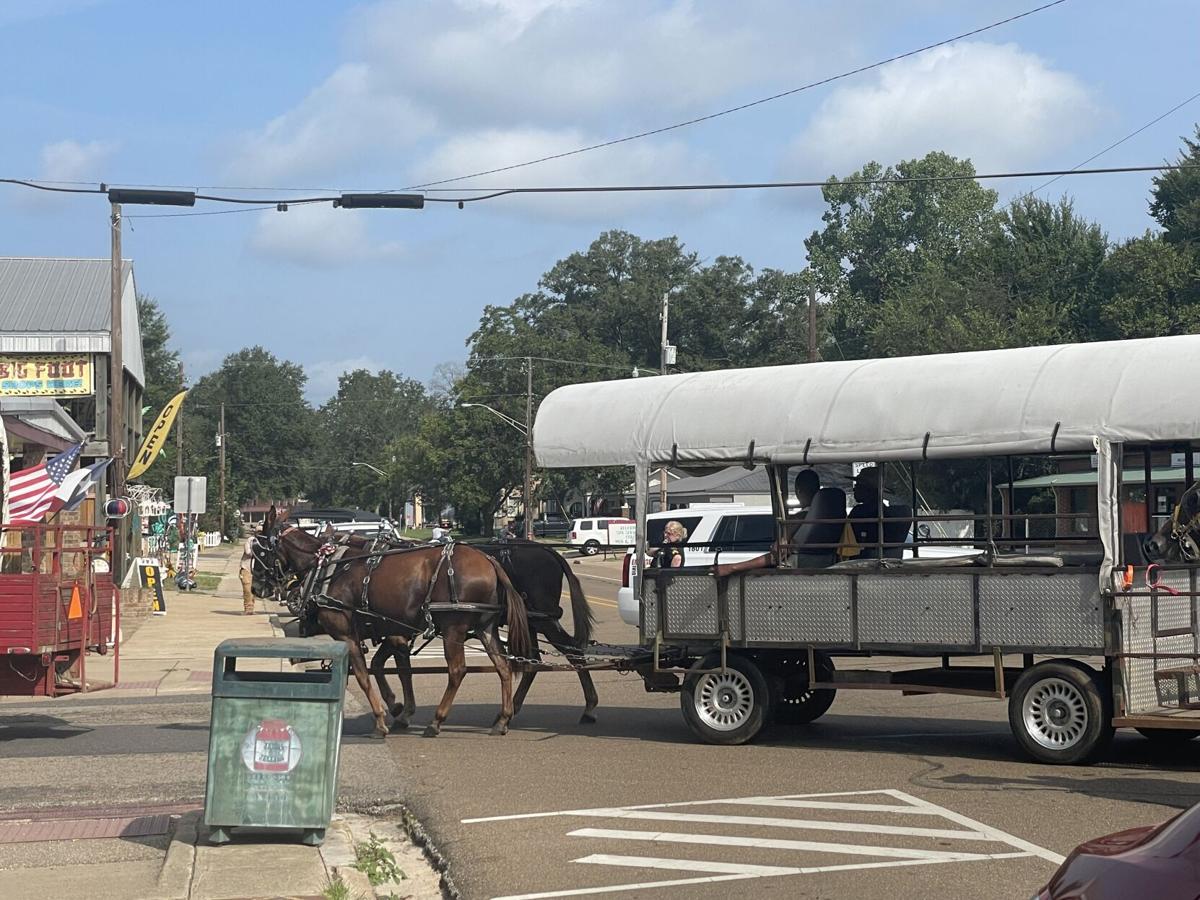 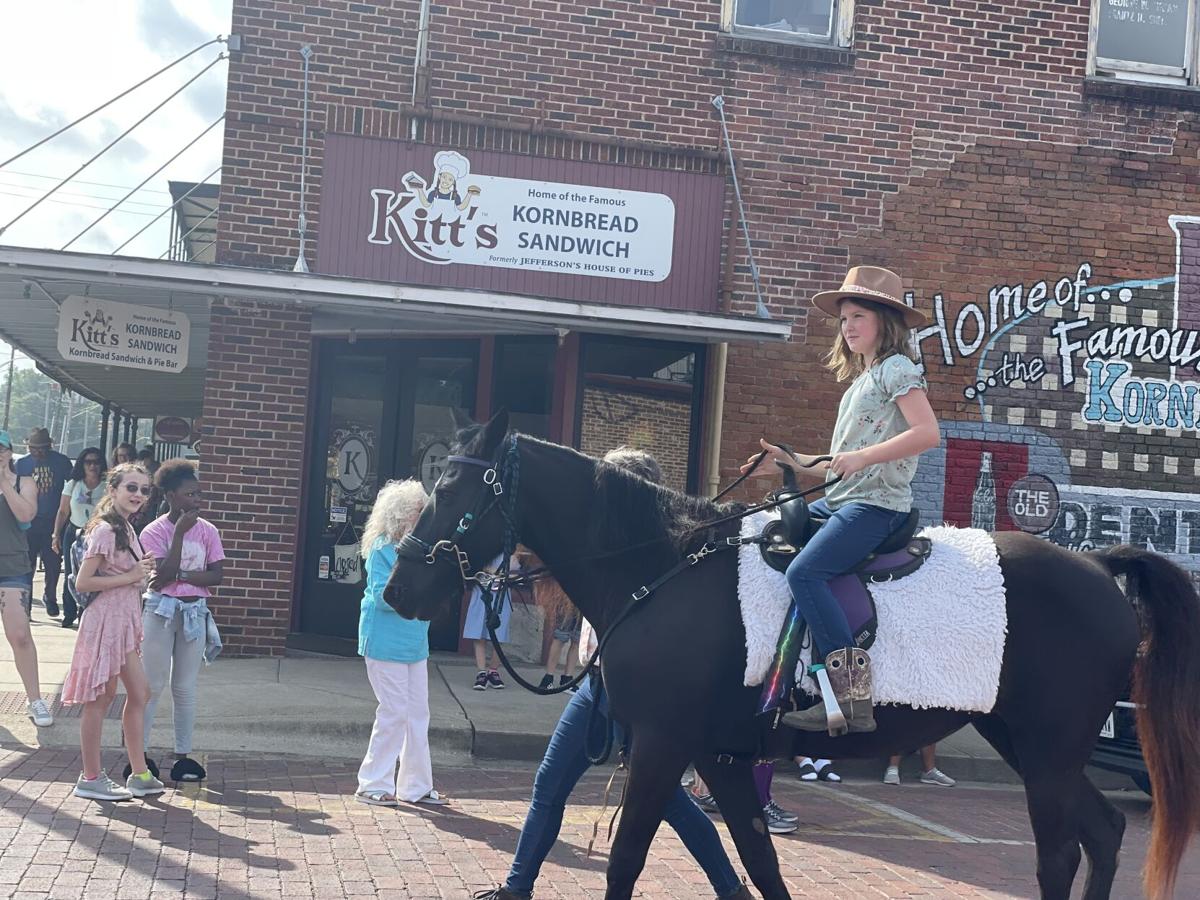 At right, Ann Tijerina, of Marshall, and her granddaughter join in the fun at the inaugural Pioneer Days Festival parade, hosted in downtown Jefferson Saturday by the Opera House Theatre Players.

Joining the parade the first annual Pioneer Days Festival parade, hosted in downtown Jefferson Saturday by the Opera House Theatre Players, was local resident, Howard Blatch, who wore an exact replica uniform worn on the Lewis and Clark Expedition that commenced in 1803 to explore the New Louisiana Purchase.

Jefferson took a step back in time, Saturday, as the Opera House Theatre Players kicked off its inagural Pioneer Days Festival, complete with a parade, street dance and re-enactments, and more for the Labor Day weekend.

“This started with an idea to have the Sons of the Pioneers here for a concert,” shared Marcia Thomas, board president of the community theatre group.

Although delayed in 2020 due to the COVID-19 pandemic, the theatre group was happy to be able to bring the concert to town this year as a special way to celebrate the opening of the new theatre season.

“I said you know what…we nearly always do a special event in September to kick off our membership. Why don’t we put it up in September,” said Thomas.

To add to the excitement, the group decided to expand the occasion to a three-day fun-filled festival.

“I said let’s do something special; let’s have a parade; let’s have a street dance,” said Thomas. “So we got our heads together and all of us said: ‘That’s a great idea.’”

Thomas said they were fortunate to make all activities, except for the concert, free, thanks to donations and sponsorships from individuals and businesses in the community.

“We decided the only way we could afford to do it, if we were going to expand it like that, would be to have donations from individuals and businesses,” she said. “We got wonderful response. I was pleased. There were so many people that were obviously interested in having something different for the community.

“The horse thing has just not been done in a long, long time. I was trying to take it back to Pioneer Days,” she said.

Although small, Saturday’s parade made a great impression to spectators as they watched the host of horses, buggies and period-dressed participants stroll by.

“The horse riders have come from Texarkana, Carthage, Lodi, and Waskom,” said Thomas. “We’ve been real pleased with the way they’ve all showed up.”

Leading off the parade was local resident, Howard Blatch, who wore an exact replica uniform worn on the Lewis and Clark Expedition that commenced in 1803 to explore the New Louisiana Purchase. Also participating was the Bayou Trailblazers Trail Riding Group.

“It was a short parade, but it sure was a nice one,” said Thomas.

The parade was followed by three re-enactments of a 1906 historical shooting that occurred in the wagon yard of downtown Jefferson.

“It’s a recreation of an actual event in the wagon yard,” said Thomas.

Board member Jim Blackburn portrayed Sheriff Terry while theatre member/actor Mark McKay played Charlie Proctor, “the deputy who went bad”. Thomas learned of the historical 1906 shooting between the sheriff and deputy through the accounts of her grandfather and his twin brother, who ironically witnessed the incident as teens.

“Jefferson was founded in 1840s, and it was wild here,” said Thomas. “And then, of course as we rolled on with this idea and got it going, I said I’ve got a great story my grandfather had told me years and years ago. I know it’s true because his twin brother also told it to my mother and she interviewed him and put him on tape; and I also did the interview.”

In addition to the parade and re-enactments, Saturday afternoon was filled with music by singer Ann Leslie Tijerina, of Marshall, who performed her own compositions for all ages at the Otstott Gazebo.

The weekend festival will continue today with a free barbecue cookout, beginning at noon, across from the Visitor’s Center, at the grassy riverfront area near the stagecoach and horse display, courtesy of the Collins Institute.

“We’ll have barbecue, beans, cornbread… and it’s all free,” said Thomas. “Because we got all these donations, we could make it free. All you have to do is show up and have a good time. That’s what we wanted to do — make it really attractive to people.”

Sunday’s cookout will feature entertainment from noon to 4 p.m. The Opera Theatre Players will also host auditions, beginning at 4:30 p.m., today, in the lobby of the visitor building to cast two upcoming productions.

Sons of the Pioneers concert

The festival will end Monday with the highly anticipated concert, featuring the renowned Sons of the Pioneers. Thomas said the nearly two-hour concert will be followed by an autograph and photo session with the audience and the Western singing icons.

Thomas said they are anticipating a crowd of about 300. The theatre group was able to fund the concert through a grant award from the Schluter Foundation.

“It’s really a wonderful thing because they fund very meaningful events and projects in this community,” said Thomas. “They gave us a sizeable grant to cover some of the expenses and fees.”

The group’s latest CDs will also be available for purchase. VIP tickets are sold out, but general seating tickets at $25 per person are still available online at www.JeffersonOperaHouseTheatrePlayers.com or at The Willow Tree by calling 903-601-4515. If there are any left, tickets may be sold at the door on a first-come, first-served basis.

“We’re happy to kick it off this way,” Thomas said of celebrating the Opera House Theatre Player’s new season with a three-day festival.

The group’s first production, a radio version of the Legend of Sleepy Hollow, is set for October.

“We want people to renew their membership and new people to join us; and we just want people to come in town and say: ‘Hey, there’s a lot going on here,’” said Thomas. “We thought this would be the perfect thing to sort of get it moving again.”