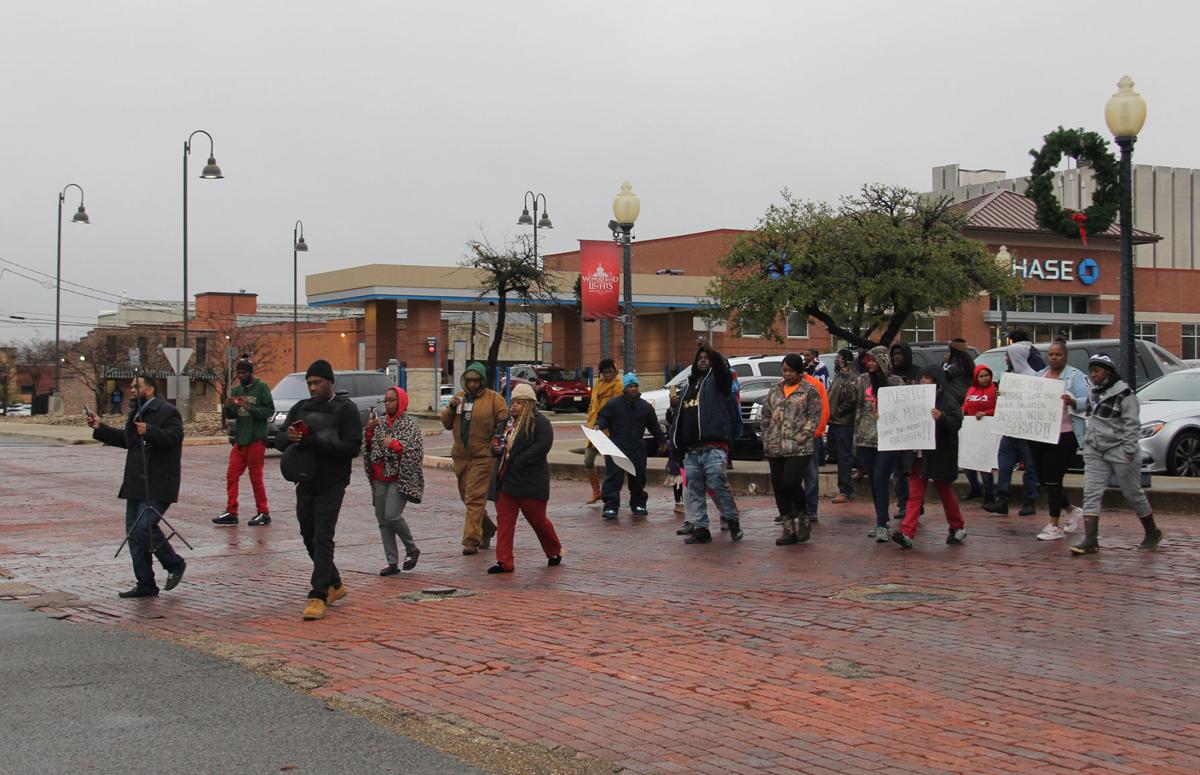 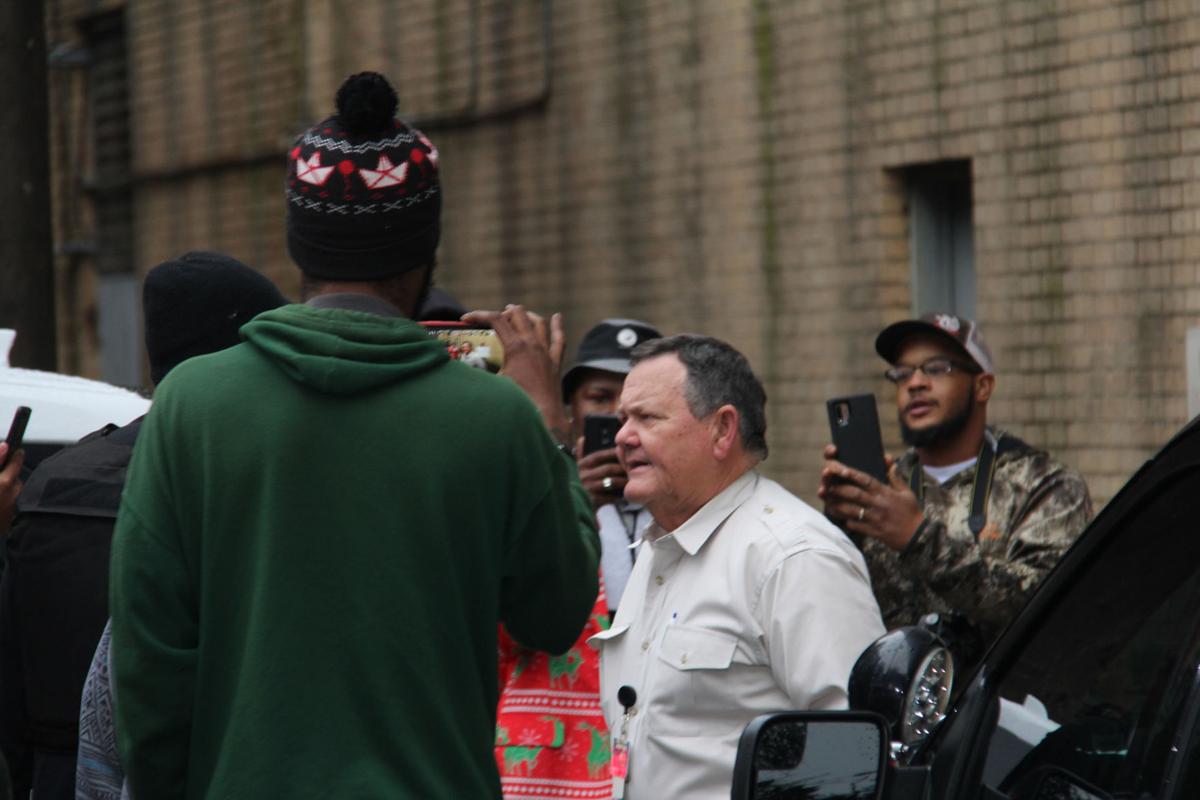 Harrison County Sheriff Tom McCool speaks to local demonstrators at a rally Tuesday in response to the death of Demetrius Williams after an officer involved shooting Dec. 5. 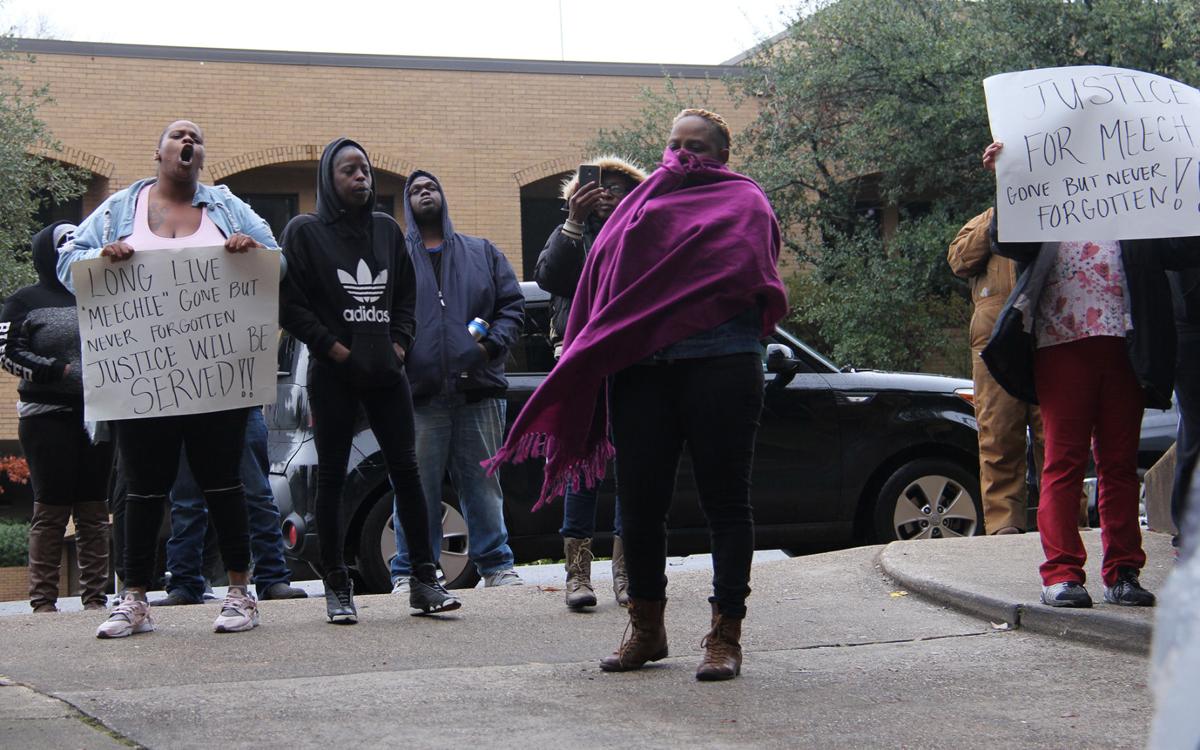 Demonstrators hold up signs demanding justice for the death of Demetrius "Meechy" Williams after an officer involved shooting.

Harrison County Sheriff Tom McCool speaks to local demonstrators at a rally Tuesday in response to the death of Demetrius Williams after an officer involved shooting Dec. 5.

Demonstrators hold up signs demanding justice for the death of Demetrius "Meechy" Williams after an officer involved shooting.

The loved ones of Demetrius Williams, who was fatally shot last Thursday as officers attempted to serve a narcotics warrant at his home, rallied at the Harrison County Sheriff’s Office in a peaceful protest Tuesday in search of closure and answers.

With signs in hand, the demonstrators shouted “No Justice, No Peace” as Dallas activists Eric Price and Ernest Walker led the march from the courthouse parking lot, to the front doors, then around the building, onto the driveway of the sheriff’s office.

The group was met by Harrison County Sheriff Tom McCool, who willingly invited the activists and immediate family members into his office to share their concerns.

“We want some answers,” Walker said of the reason for the protest. “I want to know was the officer hurt; why they fire that many bullets? I want to see an autopsy report; we want to see body cam footage.”

Walker said Marshall is his hometown and he’s concerned.

“When I heard what happened to Demetrius Williams, I heard the mother crying on the phone to me, saying to me that they don’t know what happened. They’re not getting any answers. One (officer) said well he was running. That’s not a reason to shoot someone is it?” Walker asked McCool prior to going inside to further voice concerns.

Price said as an activist, he came to support Williams’ family.

“We know what to do with these situations,” Price said.

The sheriff — in the presence of Chief Deputy Brandon “B.J.” Fletcher — spoke with the activists, Williams’ common-law wife and children’s mother Sherika Stephenson, and a cousin for about 30 minutes, shedding some light on the details that he was able to disclose, considering the case is now under investigation by the DPS Texas Rangers.

Acknowledging Williams’ criminal history, Walker said they realize that he wasn’t a saint, “none of us are… so we understand that he may have had a past here and there, but he deserved his day in court.”

“So she wants answers that she’s not getting,” Walker said, referring to Williams’ spouse.

The group went live on Facebook with the meeting with the sheriff. The video had nearly 6,000 views as of late Tuesday.

“We got a lot of useful information,” Price told the News Messenger following the meeting.

Most concerning was the fact that the HCSO SWAT or Emergency Response Team do not have body cameras. The unmarked cars do not either, the sheriff confirmed to them.

“They didn’t have no body cameras during the raid, no cameras on the vehicle,” Price said.

“First of all it’s 2020; everybody got a cell phone. Why they don’t have body cameras?” Walker questioned.

Answering questions from the group, the sheriff said it is his understanding that Williams did not have a weapon.

When asked by the group if drugs were found, McCool noted that they did find drugs in the vehicle, beside the vehicle and in the deceased’s clothes at the hospital.

Answering questions from Stephenson, the sheriff confirmed six deputies were at the scene; one was reportedly struck by Williams’ vehicle as the suspect allegedly tried to evade.

McCool said the deputy was squeezed between the two vehicles, but did not need medical assistance.

Williams’ cousin said the fact that the officer needed no medical attention makes no sense to him.

“If y’all say he drove off at a high rate of speed and a deputy was hit … his leg (would be) broke or something,” the relative said.

Explaining logistics, the sheriff said operations, such as raids, can be extremely dangerous.

The sheriff said as far as Williams, they’ve never known him to be problematic.

“I know Mechie. I’ve dealt with him right here a number of occasions,” the sheriff said. “We always got along very well with Demetrius. Everybody knew him. Basically my staff was on a first name basis with him.”

Thus, “It was absolutely no reason why anybody in this office or my agency would have wanted to injure Mechie in any way,” he stressed.

“We feel terribly bad that someone got injured, much less killed, because our objective is for that not to happen,” the sheriff said.

McCool went on to tell the group that decisions had to be made within split seconds, that moment of the shooting.

“There were children playing up at the top of the hill, there was an officer pinned between vehicles and it all happened within about three seconds, and it’s all a horrible situation that we wish had not happened,” he said.

McCool said when they went to serve the warrant at Williams’ home, the team approached the residence the minute they arrived.

“We had some officers going to the rear of the residence. Instead of him being in that residence, which was that was our intent to put him in that residence and approach him while he was in that residence, he was in his vehicle,” the sheriff said. “When our van pulled up there, they’re looking and there he is — this is not the plan — everything is just gone badly, all at once.

“A vehicle tries to block him in from the front, a blue (unmarked) pickup’s got him blocked in from the back. He makes an attempt to escape. He pins one of our officers against our own vehicle, backs up, rams the blue vehicle and manages to squeeze in between the two front vehicles, and take off,” the sheriff described. “The shooting takes place, in my view, right there in one time within about three seconds.”

The sheriff said he believes there were 17 rounds total.

“Some were at the vehicle; some went through the vehicle, one bullet struck (Williams),” McCool said, referring to the preliminary autopsy report.

“A lot of shots were not even in his direction; they were at tires, engines and so forth,” he said, adding one of Williams’ rear tires was hit and is now in the possession of the Texas Rangers.

When asked if they could see the body camera footage, McCool said the Emergency Response Team do not wear body cameras because they are in plain clothes. He said there’s also no footage from vehicles because “there were no marked vehicles.”

Asking his thoughts on the incident, if he feels the officers reacted appropriately, the sheriff said he feels the shooting is “terribly unfortunate.”

“I can’t second guess the officers’ decision,” McCool said. “From their perspective we had team members in front of Mr. Williams. He was approaching in an extremely fast manner and their lives were in danger; we had children at the top of the hill ... One of the officer’s only concern was for those children at the top of the hill. Shots were then fired. The Rangers service has the investigation at that point and I really can’t comment.”

When asked by Price what types of drugs were seized, McCool said it appeared to be crack cocaine, marijuana and maybe methamphetamine.

“There were several different types of narcotics,” he said.

The group said with the lack body cameras, for evidence, they are concerned that the Rangers will not be able to determine what really happened.

Sheriff McCool said the Rangers will be able to reconstruct the incident in great detail.

Price expressed he believes the lack of body cams allows room for law enforcement to hide the truth.

“I think that it’s unlawful for y’all not to have body cams on somebody that’s in this situation when y’all are (getting ready) to kill somebody or go do a drug bust,” said Price. “That’s ridiculous.

“How do we know y’all didn’t plant drugs? How do we know you didn’t shoot him in the back of the head and the car came after you shot him?” he asked.

McCool said he understood their position.

Stephenson said she’s not comfortable with the investigation in the hands of the Rangers.

“The Texas Rangers took over the case. How many times has the Texas Rangers came in and investigated Harrison County and found no fault at all?” she said, suggesting that the two agencies are all friends.

McCool assured that he didn’t know any of the investigators on the case. Stephenson said she prefers a federal agency to investigate her husband’s death. The sheriff said he welcomed that.

McCool said it’s not uncommon for officers involved in SWAT and ERT not to wear cameras.

Price suggested that the agency change their policy regarding that. McCool said, in fact, they’ve discussed the topic recently about whether they should put cameras on their ERTs.

“We would generally have one or more uniform officers right there close to the activity and have a camera on that officer. In this particular incident, the only uniformed officer was so far away there was none of this captured,” the sheriff said.

“I would beg of you, as a human being, to get cameras in your facility, whenever they go,” Price pleaded. “You need that for court. You need that to make sure the truth is heard.”

Giving more details behind the search warrant, McCool said they were informed that Williams had been smoking wets for about a week.

“We believed it to be very accurate,” he said.

Hearing that, Walker said the SWAT team already had a preconceived notion that Williams was on drugs.

“That was highly probable,” McCool said of the notion.

McCool said it’s his understanding that the Texas Ranger has set up a meeting with renowned attorney Lee Merritt, who is representing Williams’ family.

The meeting ended when Fletcher advised that the Ranger had contacted their office, advising not to disclose anymore.