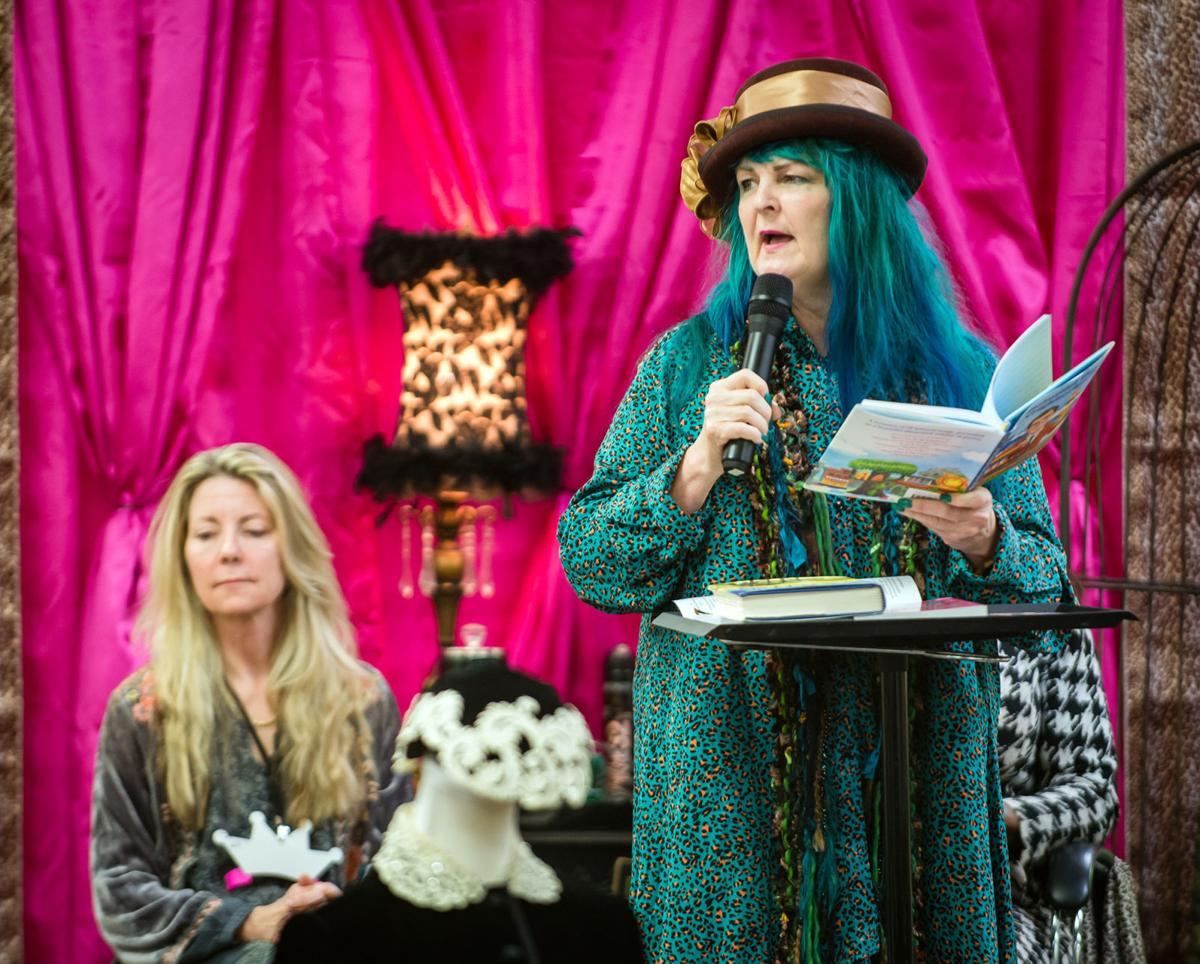 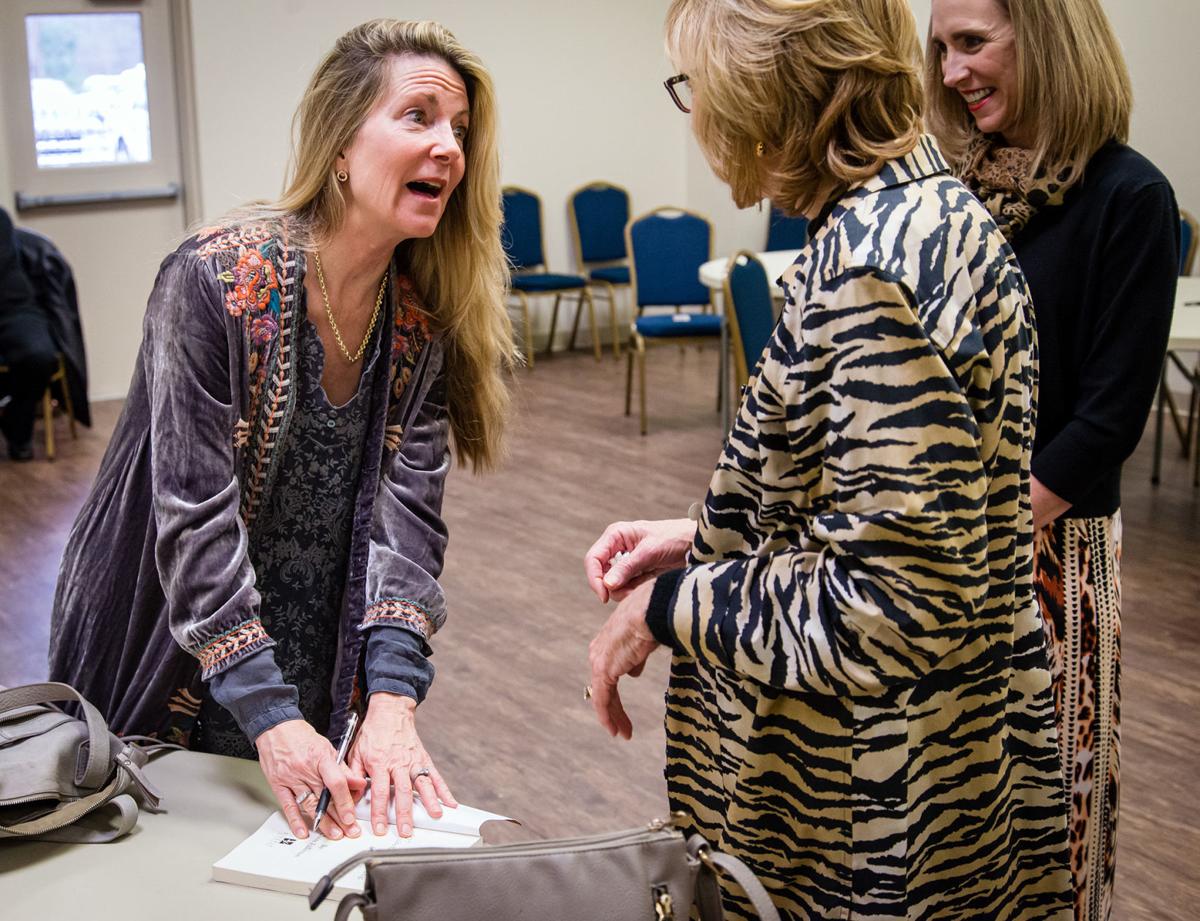 {span}Author Claire Fullerton, left, signs a copy of her book for Sue Flowers on Friday, January 17, 2020, at the 20th annual Pulpwood Queens Girlfriend Weekend in Jefferson.{/span} 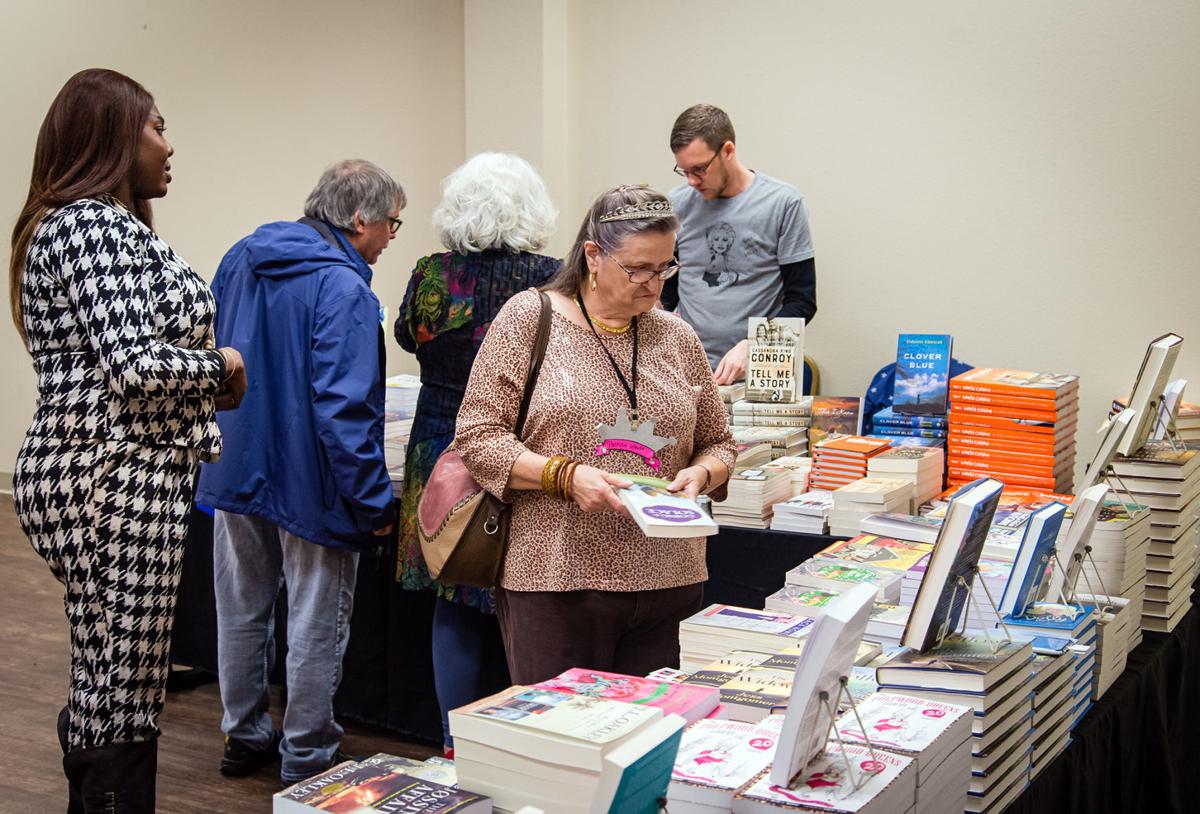 Patricia White and others shop for books Friday at the 20th annual Pulpwood Queens Girlfriend Weekend in Jefferson. 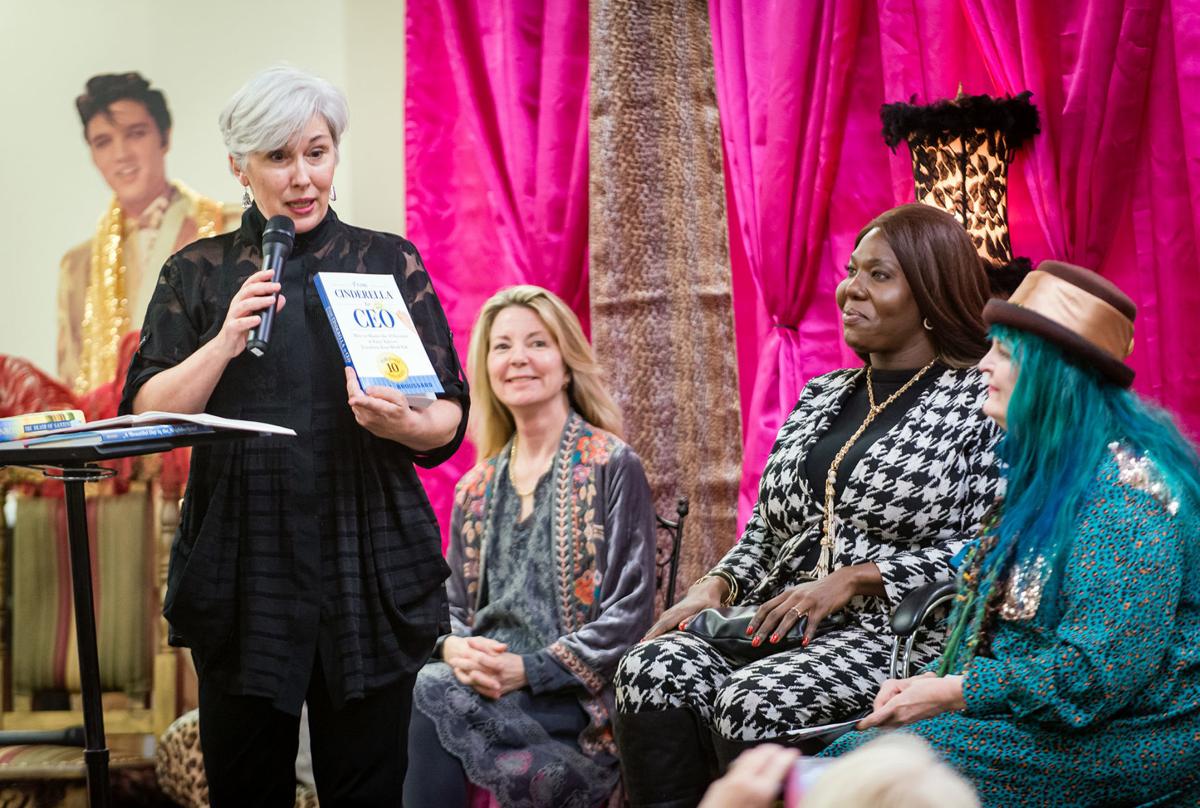 Author Cary Broussard talks about her book during a speakers panel Friday, January 17, 2020, at the 20th annual Pulpwood Queens Girlfriend Weekend in Jefferson. 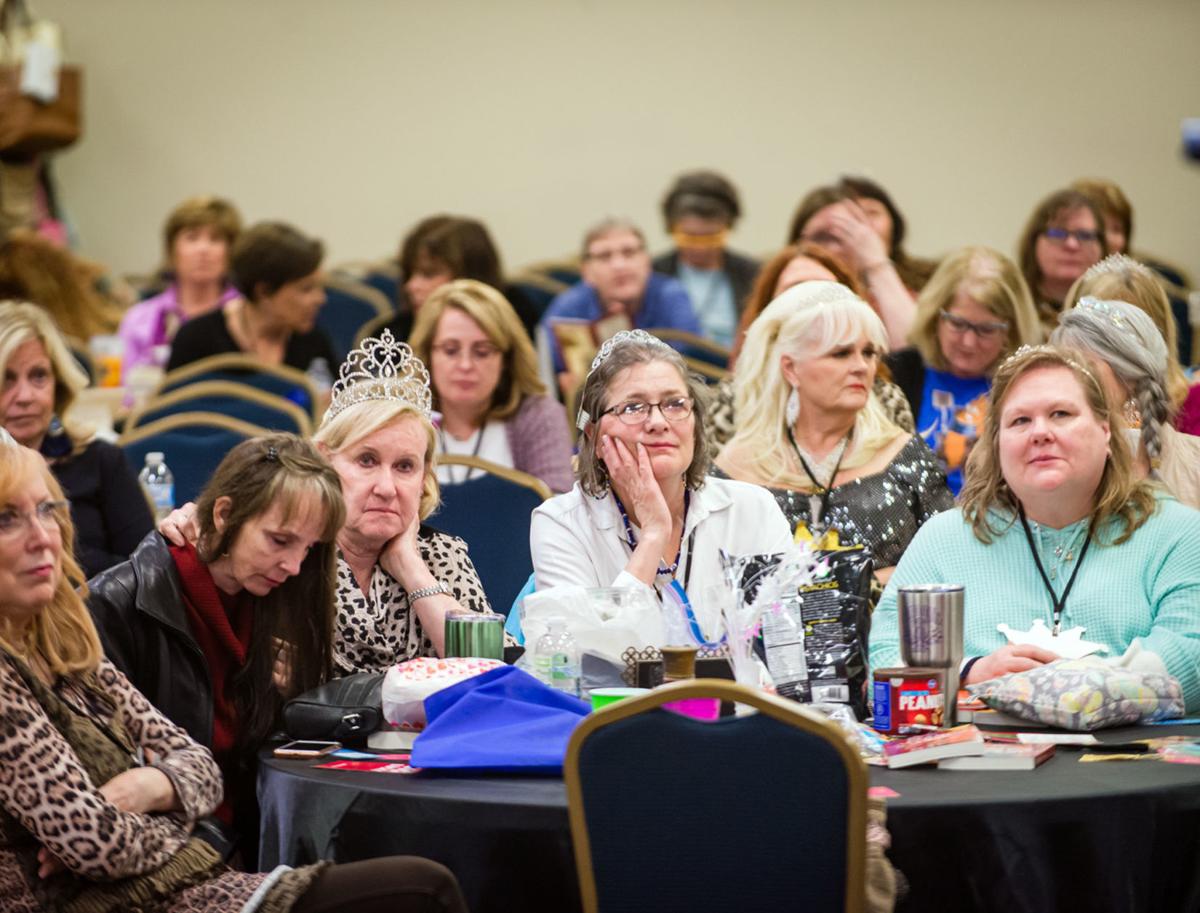 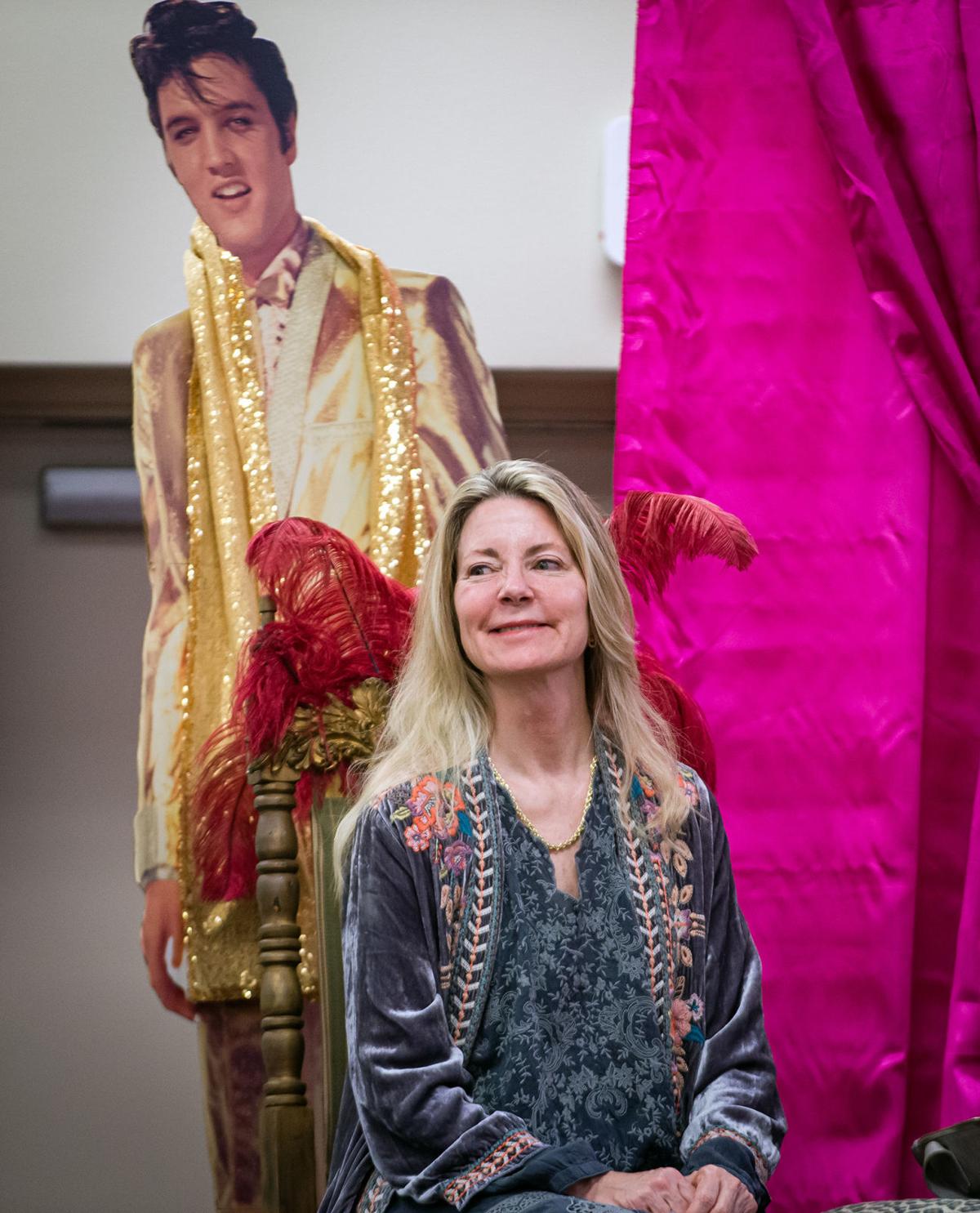 {span}Author Claire Fullerton, left, signs a copy of her book for Sue Flowers on Friday, January 17, 2020, at the 20th annual Pulpwood Queens Girlfriend Weekend in Jefferson.{/span}

Patricia White and others shop for books Friday at the 20th annual Pulpwood Queens Girlfriend Weekend in Jefferson.

Author Cary Broussard talks about her book during a speakers panel Friday, January 17, 2020, at the 20th annual Pulpwood Queens Girlfriend Weekend in Jefferson.

JEFFERSON — The queens are continuing their royal reign today in Jefferson as East Texas author and artist Kathy L. Murphy wraps up the 20th anniversary event of her Pulpwood Queens Girlfriend Weekend — an event that celebrates the largest book club in the world by having authors give presentations and panels about their work.

“This has been the best two days,” Murphy said on Friday. “This Girlfriend Weekend has been the best event ever. We have had very well received panels, so much audience participation, so many people who have come from farther away than ever before, and we’ve had so much support from the local community.”

The event, which continues at the Jefferson Visitors Center today with a lunch by the Jesse Allen Wise Garden Club and a fashion show benefiting their organization, followed by author panels and presentations, a silent auction and the awards presentation.

“It has been a glorious weekend,” Murphy said. “It’s going to be pretty exciting going into the next 20 years of the Pulpwood Queens and I’m so excited to see what happens.”

“We also raised $400 for the Shady Ladies here in Jefferson which will go to benefit the Jefferson Lions Club,” Murphy said on Friday. “The silent auction will wrap up tomorrow and we are on set this year to raise the most donations ever.”

Murphy also launched her newest book, “The Pulpwood Queens Celebrate 20 years!” this weekend during the event.

“The book goes through the past 20 years in the club,” she said. “This is a celebration of 20 years of friendship and a love of books.”

Murphy, a former Jefferson resident and business owner, never believed when she started her book club in 2000 that it would soon turn into the world’s largest book club — now made up of 787 chapters across the nation and in more than 15 countries.

Within a relatively short time, Murphy said word of the book club spread throughout East Texas and beyond.

From Oprah to stories in major newspapers across the nation — including the Houston Chronicle, Los Angeles Times and New York Times, to what would become three appearances on Good Morning America — the book club’s notoriety soared.

“We just exploded and then Diane Sawyer was calling me. It was amazing to me that this book club, started in a small East Texas town, was becoming to mean so much to so many people across the world,” Murphy said. “We are now the largest book club in the world with 787 chapters.”

Murphy wrote and published a book about her club in 2008 titled, “The Pulpwood Queen’s Tiara-Wearing, Book-Sharing Guide to Life.”

The book follows the events and philosophies of the club’s colorful and fun members and authors.

With the rights to her first book about the Pulpwood Queens sold to DreamWorks entertainment and filming in the process for the past three years’ events for a film, Murphy is excited to see how her second book about the club is received.

Now Murphy is in negotiations for a possible Netflix series or special about “Beauty and the Book.”

Also new this year, the book club is going digital.

“We are getting ready to launch the Pulpwood Queens All Access Online Book Club,” Murphy said. “This is a new form of membership we’re starting for the club this year and it’s based online. This is a new way to access and subscribe and we are so excited.”

This year’s Pulpwood Queens Girlfriend Weekend event, which is open to men and the general public who are not yet book club members or authors, wraps up today at the Jefferson Visitors and Transportation Center.

Today’s Vintage Fashion Show, with fashions from 1776 through 1976, will benefit the Jesse Allen Wise Garden Club, the Big Hair Queens Ball and much more.

Tickets to the weekend are still available though capacity is limited. Tickets can be purchased individually per each event or packages for the entire weekend are available.