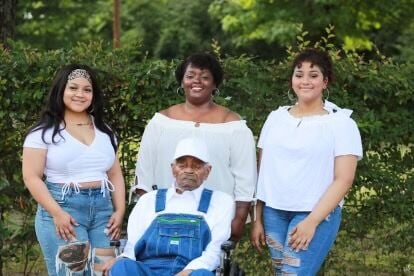 Subrina Robinson (center) poses with her two daughters Jada and Monica Hughes, and her grandfather, who passed away recently. 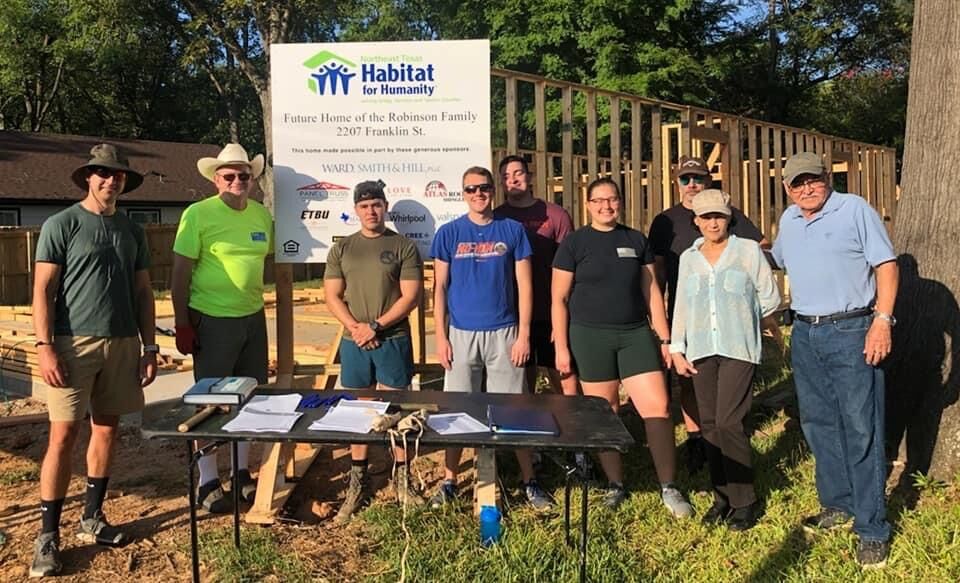 Habitat for Humanity volunteers stand at the site of the Robinson family’s new home on Franklin Street in Marshall.

Subrina Robinson (center) poses with her two daughters Jada and Monica Hughes, and her grandfather, who passed away recently.

Habitat for Humanity volunteers stand at the site of the Robinson family’s new home on Franklin Street in Marshall.

When Subrina Robinson attended a meeting at the Lions Club in Marshall in 2018 and got information about the North East Texas Habitat for Humanity, she never dreamed she would be selected to receive a home.

In fact, Robinson said that she waited for the last day to turn in her application for the program, almost forgoing submitting it all together.

“I waited until the last minute to turn it in, because I never thought in a million years that I would be selected,” Robinson said.

But earlier this year Robinson and her two daughters were selected as the recipients to one of Habitat for Humanity’s new homes in Marshall.

Right now, Robinson and her daughters, Jada and Monica Hughes — 19 and 15 years old respectively — live in a two bedroom apartment. While the family is happy and loves to live together, Robinson said that she had hoped to set down more permanent roots for her two daughters.

“For us, a lot of it was about space; right now three of us in a two bedroom apartment is a lot,” she said.

As a Marshall native, Robinson grew up in the area surrounded by family. With four siblings of her own, Robinson said that her family, and especially her grandparents, were a constant presence in her life in Marshall.

“We may have an uncle who would move out to Dallas, but that’s as far away as my family has moved, we are all still here in Marshall,” Robinson said.

She explained that the presence of her family here in town, and the roots that they have set down here, made her determined to do the same for her two daughters.

“It’s a foundation, it’s a place that they can come home to if they decide to go away,” Robinson said, “I have my mother’s house, and my mother’s house has always been her house, and going there is still going home for me. I want that for my daughters.”

That is the gift that Habitat for Humanity has given to the Robinson family, with work on their new home on Franklin Street in Marshall already underway.

The new house will be a three bedroom, two bathroom house built for the family. Habitat for Humanity volunteers have already started the project, with construction dates planned for every Saturday now through the end of October via the group’s Facebook page.

Robinson said that the very first thing she plans to do with the home is to host a large family dinner, inviting her siblings and nieces over to the new home to celebrate.

“They (her nieces) are already so excited, my sister has brought them by the house already to show them where it will be, and they are going to come and help us plant the grass seeds when its time so that they can say they helped build their Aunty’s home,” she said.

The home will hopefully be finished before the end of the year, according to Robinson, though the celebration will be bitter sweet with one notable loss: Robinson’s grandfather passed away two days before she received the final call about her Habitat for Humanity home, which she said disappointed her.

“I am happy, I’m so grateful, but it’s also a little bitter sweet because I never got to have him over to my home,” she said.

The family will keep him firmly in their minds though as they gather together to celebrate the completion of Robinson’s home.

Habitat for Humanity is always seeking volunteers, and community members can learn more about the organization or volunteer to help by going to www.facebook.com/northeasttexashabitat.