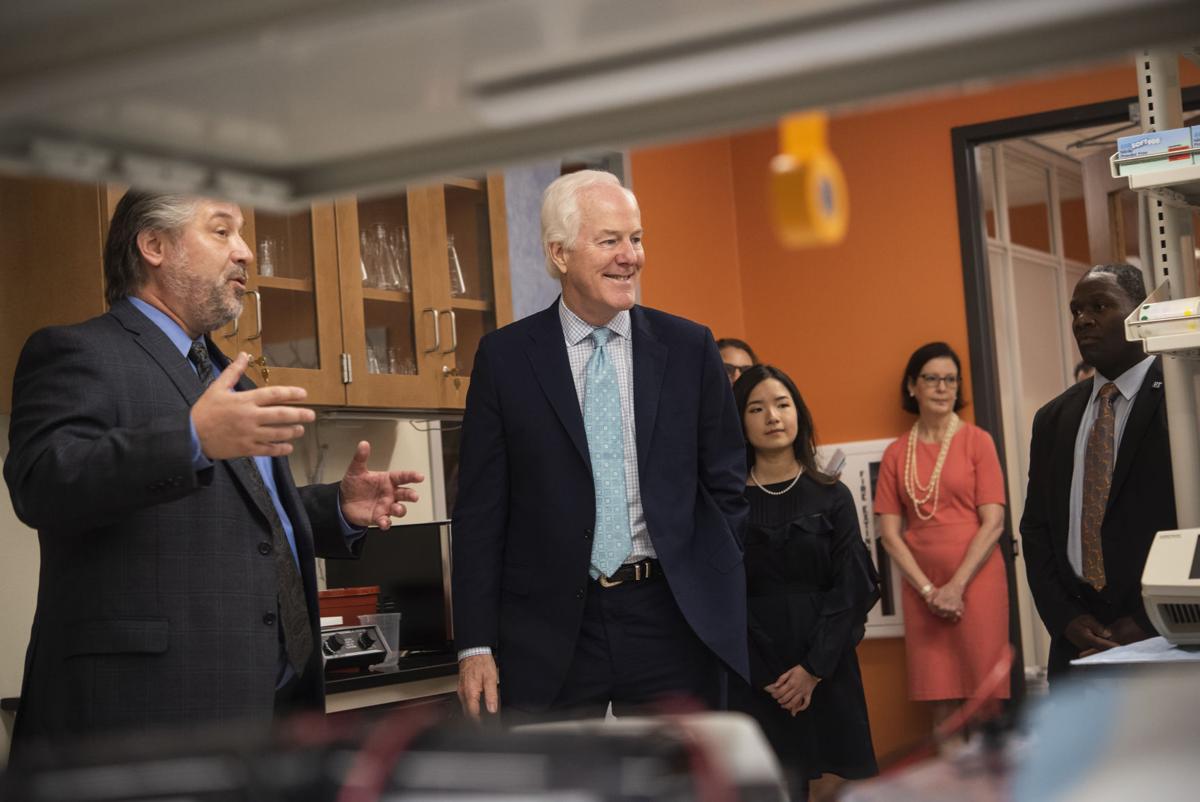 Dr. Lane Brunner, Dean of the Fisch College of Pharmacy, at left, gives U.S. Senator John Cornyn, R-TX, a tour of the pharmacy lab after Cornyn hosted a roundtable discussion at the school about opioid addiction on Wednesday at W.T. Brookshire Hall at The University of Texas at Tyler. 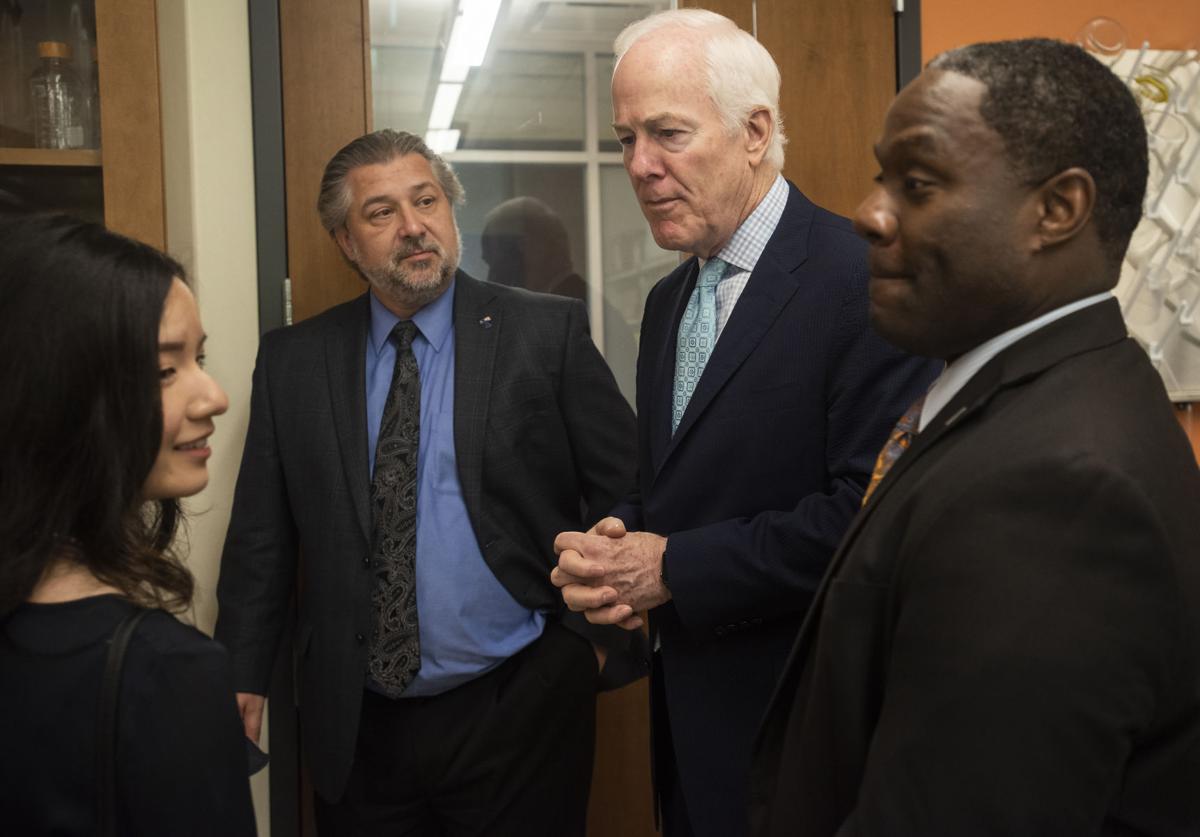 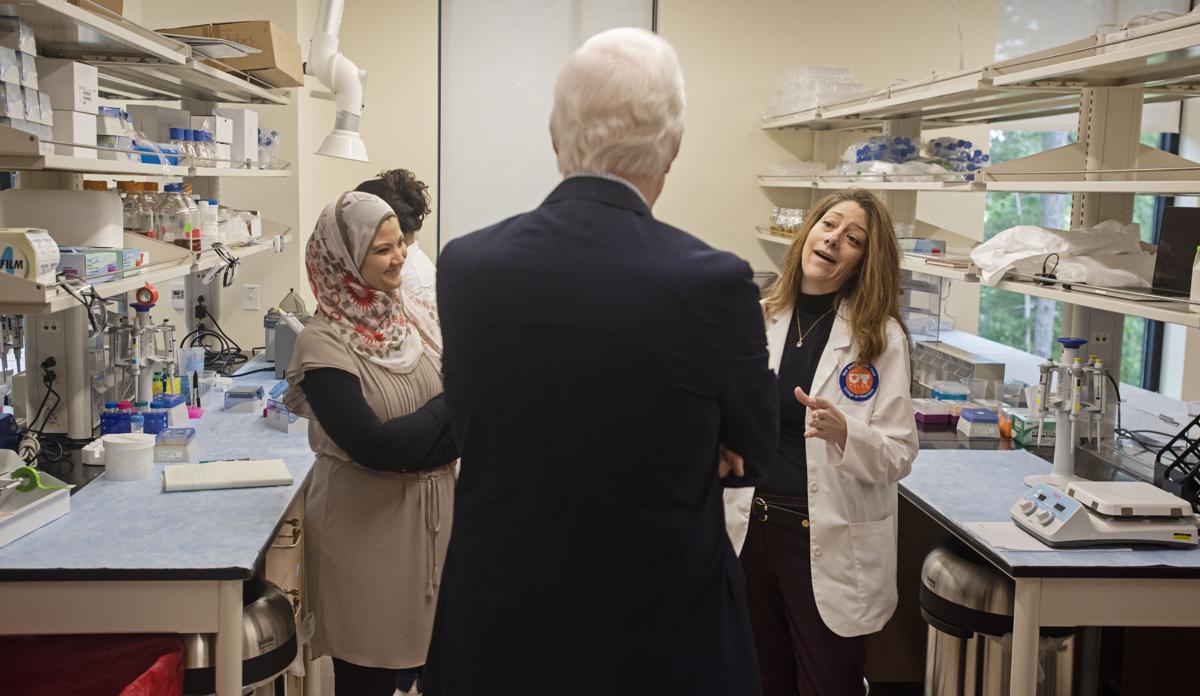 U.S. Senator John Cornyn meets with Dr. May Abdelaziz, left, and student pharmacist Heather Sibal, right, during a tour of the Fisch College of Pharmacy pharmacy lab on Wednesday.

Dr. Lane Brunner, Dean of the Fisch College of Pharmacy, at left, gives U.S. Senator John Cornyn, R-TX, a tour of the pharmacy lab after Cornyn hosted a roundtable discussion at the school about opioid addiction on Wednesday at W.T. Brookshire Hall at The University of Texas at Tyler.

U.S. Senator John Cornyn meets with Dr. May Abdelaziz, left, and student pharmacist Heather Sibal, right, during a tour of the Fisch College of Pharmacy pharmacy lab on Wednesday.

U.S. Senator John Cornyn said the biggest challenge in America is the demand for opioids. He stressed the urgent need to stanch the demand and provide support for officials and specialty courts that provide supervision to help people break the habit.

“As long as people keep buying these drugs, the cartels will continue to get rich,” Cornyn, R-Texas, said Wednesday. “They don’t care about people. It’s part of a larger problem, but anything we can do with the demand side will strike a blow.”

Cornyn was in Tyler for a roundtable discussion at the University of Texas at Tyler’s Fisch College of Pharmacy, where he heard from local leaders about the work being done in East Texas to combat the opioid addiction, misuse and overdose problems plaguing the area and the country.

Cornyn said the opioid epidemic is a global phenomenon.

“We have to look at all sources whether it’s across the border, through the mail through FedEx or DHL or some other source,” Cornyn said.

Smith County Sheriff Larry Smith said he’s convinced opioid abuse is not a choice, but an illness. Smith said he would like to see a program like Hope Not Handcuffs, something he said he became familiar with through a woman in Detroit.

Smith said the program allows people to self-identify as having a drug problem at a police station or a sheriff’s office.

“Volunteers who will get them into a treatment program,” Smith said. “It’s something we need to do. We need to have another outlet to get to those people before they get to the DA, the police department or law enforcement, which will help with the demand for opioids.”

Elueze said the committee wants to increase awareness and education to combat the misinformation about the drugs and to reduce misuse and overdose by educating physicians and pharmacists about how the drugs are prescribed.

“We want resources to help us treat in a physician’s office,” Elueze said.

Cornyn praised Smith and Elueze’s efforts and motivation about their work.

Linda Oyer, chief executive officer of East Texas Council on Alcoholism and Drug Abuse, said funding is needed to expand recovery services, medication and therapy for those who have gone through treatment.

She also told Cornyn about the challenges the area faces with the lack of state-funded bed space in residential treatment programs. She said there are 10.

Dr. Lane Brunner, dean of UT Tyler’s Fisch College of Pharmacy, told the senator about the college’s role in training new pharmacists and how pharmacists are on the front lines of opioid issues.

“They are the experts in medication in the community,” Brunner said. “They are in every community, every hospital and on every corner. That means we have the initial touch with people who have difficulty with opioids.”

Brunner said the college spends a lot of time teaching students about opioid addiction, including pharmacology, the therapeutic use of opioids and what to do when therapy stops so patients don’t go through withdrawals.

“When a prescription comes to the pharmacy, it’s not about dispensing it,” Brunner said. “It’s about looking at the total patient to determine if it’s the right drug and the right dose for that patient for the right period of time.”

Brunner said it’s hard to get people to spend more time talking with a pharmacist.

“It’s one of the ways we find out if a patient has fears about taking a particular medication,” Brunner said.

Ngoc Nguyen, 2019 valedictorian of the UT Tyler’s Fisch College of Pharmacy, told Cornyn her mission to ensure that patients understands their disease and understands what medications they are taking — especially when it comes to opioids.

Cornyn said the Centers for Disease Control and Prevention reported 70,000 people died from overdoses (in 2017) and there are synthetic opioids like fentanyl that are more deadly. He stressed the need for law enforcement to intervene if physicians are overprescribing prescriptions.

Cornyn said the SUPPORT for Patients and Communities Act, signed into law in October 2018, is to enhance the ability to scan boxes going through the U.S. Postal Service.

The law, which includes language authored by Cornyn, reauthorized critical programs to reduce demand for narcotics, provides tools to pharmacists, prescribers and law enforcement so they can better combat opioid addiction and supports those recovering from substance use disorders.

Putman said he is grateful to see in the legislation that all the stakeholders have a part in fixing the problem.

Cornyn also stressed the need for physicians to prescribe non-steroidal medications for pain.

“You don’t need a 10-pound hammer when a fly swatter will do the job,” Cornyn said. “I think this has to do with educating physicians, and I think this is where pharmacists play an important role. It’s harder and harder to get focus on getting patients to interface with pharmacists. “

Cornyn said patients should be willing to talk to pharmacists and ask questions about their prescriptions.

He said drug courts also have an important role to play. Through them, judges and probation officers have to monitor an individual’s compliance with a recovery regimen.