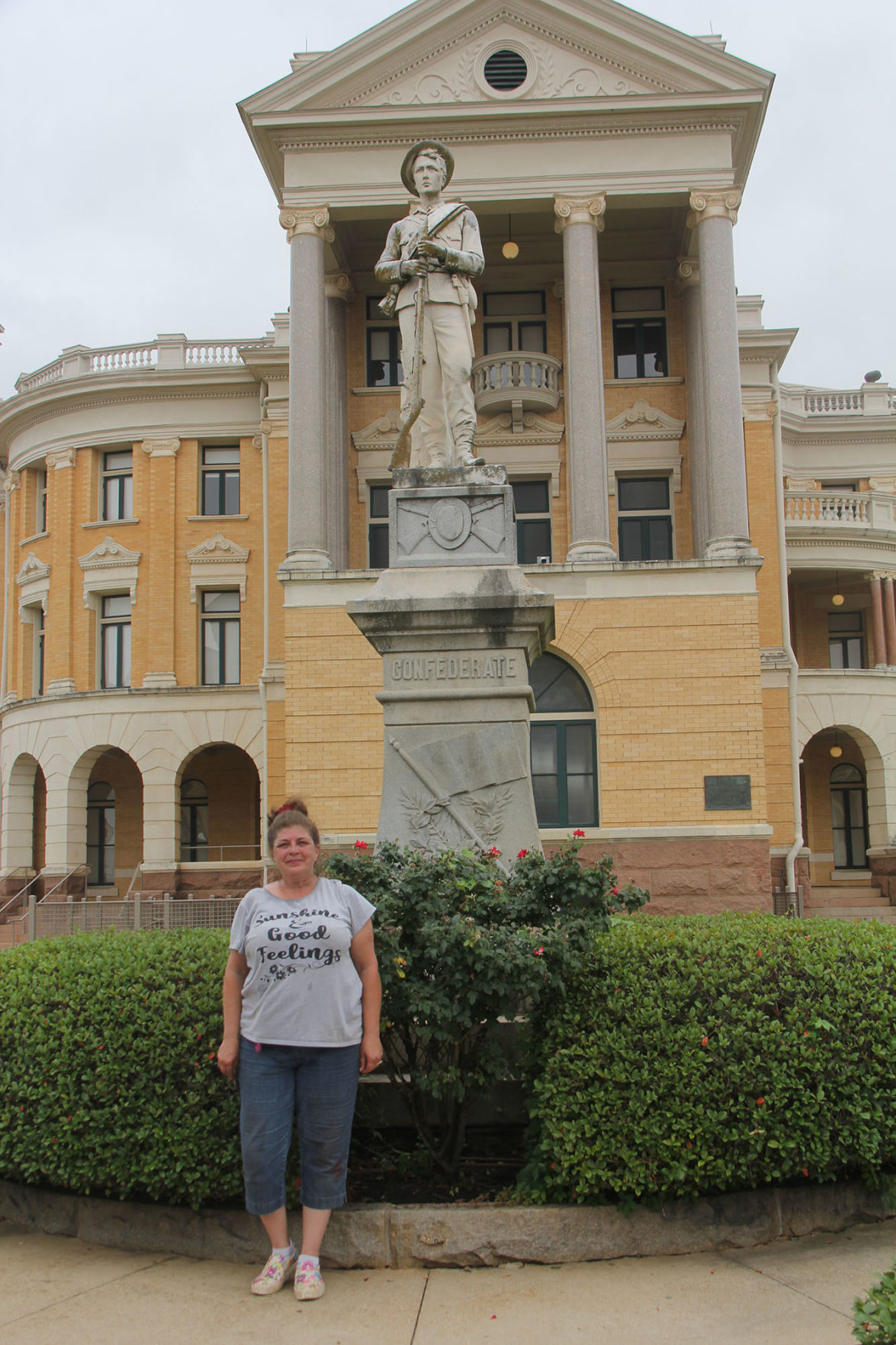 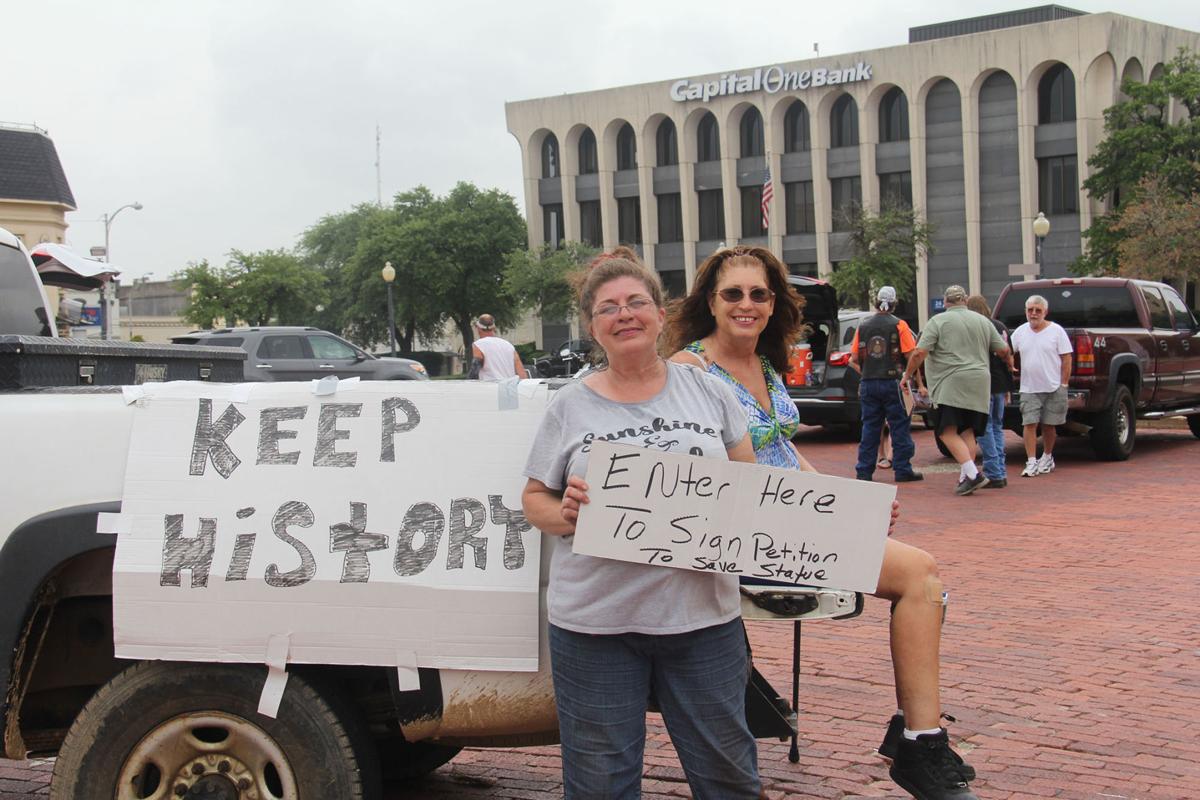 Susan Chamberlain, left, and her friend, Sherry Dallas Howard direct people into the downtown area to sign a petition to save the Confederate statue. 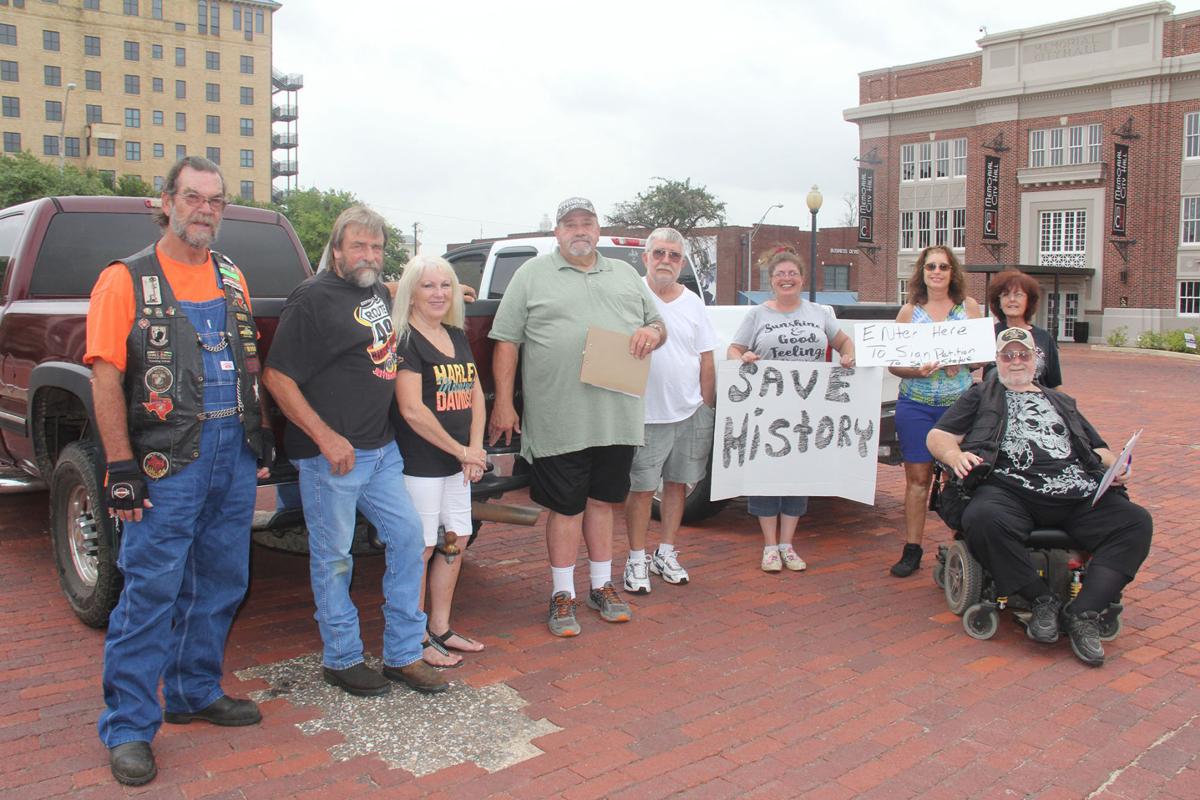 Volunteers gather signatures downtown to save the Confederate statue on a petition in opposition to remove it.

Susan Chamberlain, left, and her friend, Sherry Dallas Howard direct people into the downtown area to sign a petition to save the Confederate statue.

Volunteers gather signatures downtown to save the Confederate statue on a petition in opposition to remove it.

The now controversial Confederate statue that stands over the east side lawn of the historic 1901 Harrison County Courthouse was gifted by the Daughters of Confederacy in 1906 to pay homage to soldiers who lost their lives during the Civil War, protesters against the statue’s relocation say.

The history of the statue has been a hot topic since the launching of a petition by Marshall Against Violence president, Demetria McFarland, calling for it to be peacefully removed because of the Confederacy’s historic connection to America’s dark history of slavery.

Counterpetitioners to McFarland’s request say the monument has nothing to do with race. Bill Elliot, a member of the WW Heartsill Camp No. 2042 of the Sons of Confederate Veterans, recently gave his insight, sharing the history of organizations and auxiliaries of the Confederacy.

“The intent is to keep the memory and the respect of the Confederate and Union soldiers, of both groups, alive for the sacrifice and suffering that they went through,” he said.

“We are not to judge why they did it. We didn’t live back then,” he said of the Civil War era.

“People just need to understand what happened in Fort Sumter, (South)Carolina, by the time they fired the shots that started the war, how distorted it was by the time it got to East Texas,” Elliot said.

He said in soldiers’ minds, they were fighting for their’ state’s rights. States had a right to secede from the Union.

“Anybody who looks at the Constitution, (can see) the states did have a right to get out if they didn’t like the way it was going; but that’s their decision,” said Elliot. “I didn’t live back then.

Elliot pointed out the Constitution of the Sons of Confederate Veterans, which states the nature and purpose “shall be strictly patriotic, historical, educational, fraternal, benevolent, non-political, non-racial and non-sectarian.”

The Constitution goes on to say, the Sons of Confederate Veterans neither embraces, nor espouses acts or ideologies of racial and religious bigotry, and further, condemns the misuse of its sacred symbols and flags in the conduct of same.

Likewise, in 2018, the United Daughters of the Confederacy released a statement asking citizens to join them in denouncing hate groups and affirming that Confederate memorial statues and monuments are part of a shared American history and should remain in place.

“We are grieved that certain hate groups have taken the Confederate flag and other symbols as their own,” Nelma Crutcher, President General, wrote in a statement. “We are the descendants of Confederate soldiers, sailors and patriots. Our members are the ones who have spent 125 years honoring their memory by various activities in the fields of education, history and charity, promoting patriotism and good citizenship.

“We are saddened that some people find anything connected with the Confederacy to be offensive,” she added. “Our Confederate ancestors were and are Americans. We as an organization do not sit in judgment of them nor do we impose the standards of the 19th century on Americans of the 21st century.”

Crutcher said it is their sincere wish that they’d be allowed, as fellow Americans, to continue to honor the memory of their ancestors. Elliot, who has devoted time in various capacities working for the betterment of all in the community, said it breaks his heart to see the Marshall community at odds over the statue.

“I hate that anything would do anything to separate the community; but I have to stand firm,” he said.

He said to remove the memorial dedicated to those soldiers would be heartbreaking.

“I am a descendant of a veteran of the American Revolution War, and the Civil War (both sides) and World War I, and I’m the son of a World War II vet; I am a cousin of a Vietnam vet,” said Elliot. “I believe in honoring all vets – men, women, black, white, all colors, because they stuck their neck out for my liberty. And this is honoring them when that statue was put up.”

Elliot said dedicating monuments to the Civil War-era was a popular gesture by the women’s auxiliary groups at the time.

“It was to honor them because they were dying off, and to do something for the ones still alive,” said Elliot. “That was a community event. There were merchants that gave a percentage of their sales over the weekend to that fund. There were plays and shows and musicals given to raise money for that statue. There were individuals like Robert Loughery, he was the publisher of the Evening Messenger and he was a Civil War veteran, and he was begging and pleading for men to step up and raise the last $100 by giving $1….the last $100 they owed. This statue cost them (about) $3,000.”

The idea of a memorial monument was the brainchild of Mrs. TA Elgin. The Daughters of the Confederacy were able to realize the dream with the help of supporters from New York to El Paso and from “ocean to ocean,” the Evening Messenger article states.

News coverage of the Friday, Jan. 19, 1906, edition of the Marshall newspaper, featured the unveiling on the front page. The headline read: “Impressive Ceremony in the Presence of a Large Concourse, with Ideal Weather Conditions. Splendid Gift of U.D.C.”

The unveiling was celebrated in conjunction with the birthday observance of General Robert E. Lee, also a controversial figure renowned as the infamous Confederate Army commander who defended the enslavement of Blacks during the American Civil War.

The occasion was well attended with special guests from Jefferson to Shreveport, La. It was a ceremony of grandeur complete with poems, speeches, a grand march and concert band.

Thirteen little girls represented the 13 Southern states. Songs rendered during the ceremony included Dixie and Maryland, Maryland, which have both been current topics of debate and viewed as controversial songs of the Civil-War era.

The “Vacant Chair,” a sentimental Union song that was a hit to both the north and the south was also performed along with the patriotic song, “America”.

In her address, Mrs. T.A. Elgin, president of the Daughters and brainchild of the statue, expressed the sculpture was a thought of love, patriotism and unshaken fidelity to the old cause.

“This monument erected to the memory of our Confederate soldiers and dedicated by their noble achievements is the ‘Labor of Love’ fresh from the hands of the Daughters of the Confederacy of the Marshall Chapter No. 412, who have labored for almost three years to achieve its consummation,” she said.

Elgin said the monument was to stand like a stone wall to commemorate the noble and their many virtues and bravery “until time shall be no more.”

The white marble monument was designed by Frank Teich, and boasts a gray granite base. The first step or base is nine-feet square and the monument is 19-feet high from bottom to top. The middle part contains inscriptions dedicated to the love, gratitude and memory of the soldiers. On the front or east side is carved a Confederate flag entwined with a laurel wreath and a palm leaf. Directly below the plinth are four bas-reliefs, representing the four-armed services branches.

“The soldier that surmounts the pedestal is a well-studied figure of a Confederate soldier, youthful but strong, with a determined face,” the 1906 Evening Messenger article of the unveiling describes. “There is a deep study in this soldier which is executed in the higher degree of fine arts. He can stand alongside statues made by ancient heroes like an Apollo of the 19th century.”

The sculptor, Teich made the first model in clay, full size. A young man, who was around age 22 and a member of the militia, served as his model.

“The gun, bayonet, canteen and haversack all were studied separately so as to be perfect in representing the accoutrements during the war,” the article states.

A Plaster of Paris model of the sculpture was shipped to Italy, where the figure was carved from marble, the Smithsonian catalog states. The granite for the base was quarried near Llano.

Upon the very ground upon which the monument was unveiled, several companies were sworn into service during the early part of the war. One of the most notable was “Bass Greys,” later known as Co. D of the Seventh Texas regiment. In the late summer of 1861, the company was engaged in many of the bloodiest battles during the struggle. Of the 91 names upon the roster leaving Marshall, 73 had died. Gen. K.M. Van Zandth, who was the captain of the old company when organized, was present to witness the unveiling of the statue.

Harrison County boasted 13 companies. A total of 844 soldiers served from this community. “There were 177 that didn’t come back,” Elliot said.

The companies lost even more after the war through 1876 as a result of disease, wounds, and trauma.

“Disease killed a whole bunch of them. 11 percent of the 177, disease got them,” said Elliot.

His camp’s namesake, W.W. Heartsill, returned after war and later served as mayor of Marshall.

Elliot reiterated the statue is not meant to be an offensive relic; just a memorial.

“But it’s been turned around, so it’s a flag of embarrassment, when it is actually a flag of pride for our ancestors that served under it,” he said.

He said it’s already at a museum, situated on the grounds between the historic museum and the new military museum.

Like Leigh Ann Buchanan, who started one of the counterpetitions to keep the statue where it is, Elliot said he would love to see the statue idea of James Famer on the opposite side of the courthouse come to fruition, and contribute. Local late historian Gail Beil had started a movement to raise funds for a statue, to be erected also on the courthouse grounds, of the Marshall native, civil rights leader and member of the renowned 1935 Wiley College Great Debaters, to no avail.

Elliot said the Confederate monument is a part of history, which is what Marshall prides itself on

“Marshall was an important part of the Confederacy. It was the headquarters of everything that come in and out of Texas to do with the Civil War, from mail to supplies, to money,” said Elliot. “That’s history.”

Elliot said there’s nothing on the monument alluding to the superiority of a race.

“So let’s not divide our community,” he said. “Let’s do what we can today to move Marshall forward.”