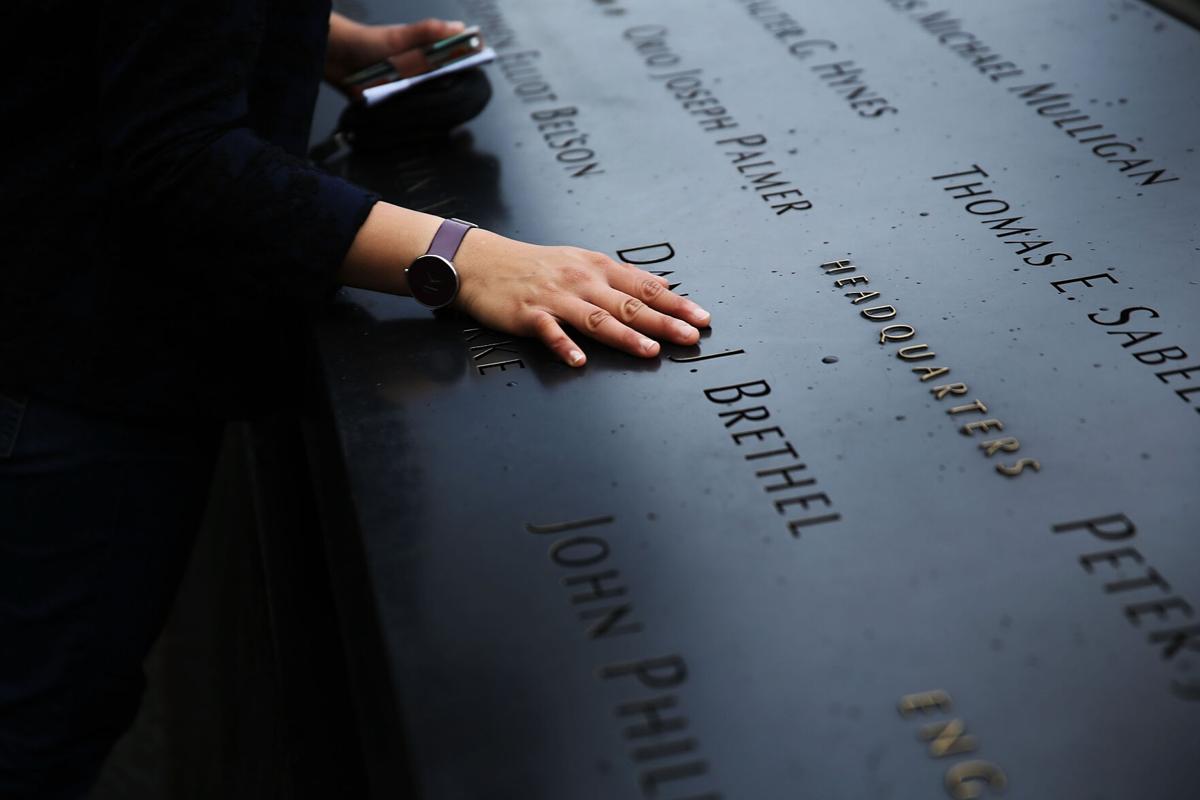 A woman places a hand on the names engraved along the South reflecting pool at the Ground Zero memorial site during the dedication ceremony of the National September 11 Memorial Museum in New York on Thursday, May 15, 2014. (AP Photo/Spencer Platt, Pool) 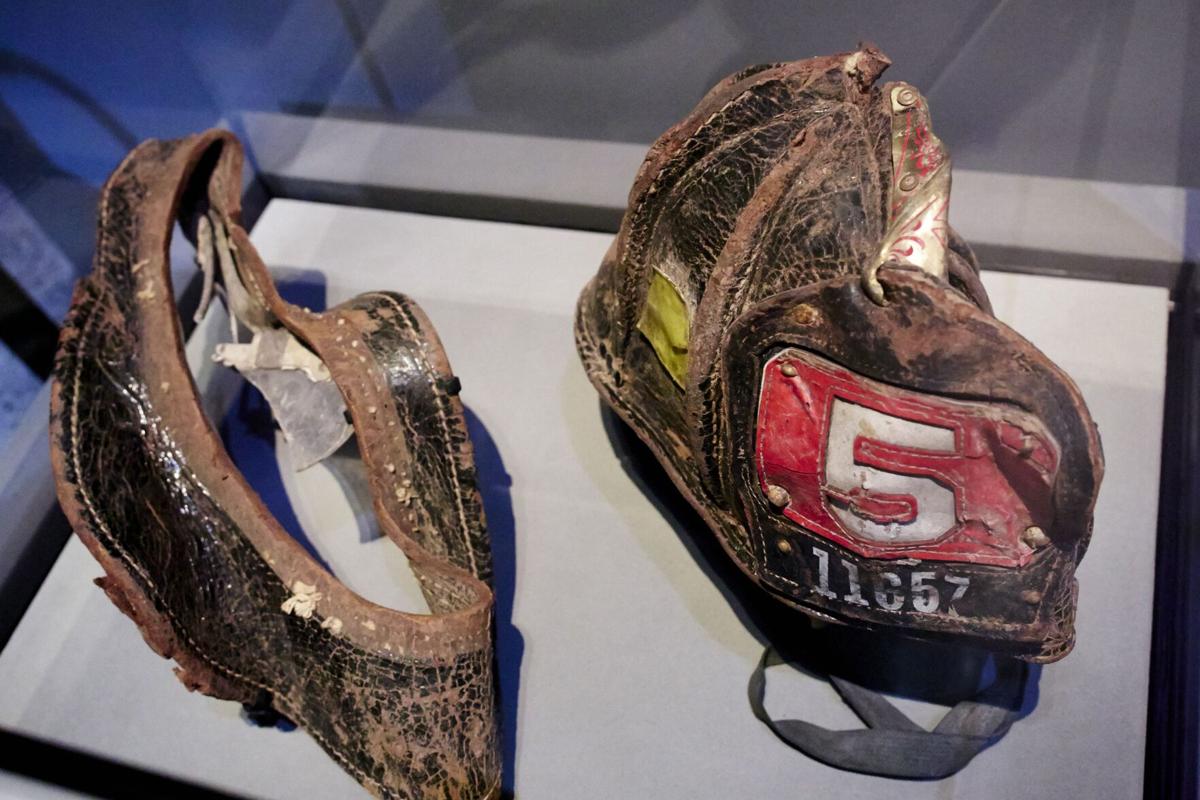 New York City Fire Department Firefighter Christian Waugh’s helmet he wore on September 11, 2001, are on display during a press preview of the National September 11 Memorial Museum on Wednesday, May. 14, 2014 in New York. The museum opens on May 21, 2014. (AP Photo/The Daily News, James Keivom, Pool)

A woman places a hand on the names engraved along the South reflecting pool at the Ground Zero memorial site during the dedication ceremony of the National September 11 Memorial Museum in New York on Thursday, May 15, 2014. (AP Photo/Spencer Platt, Pool)

New York City Fire Department Firefighter Christian Waugh’s helmet he wore on September 11, 2001, are on display during a press preview of the National September 11 Memorial Museum on Wednesday, May. 14, 2014 in New York. The museum opens on May 21, 2014. (AP Photo/The Daily News, James Keivom, Pool)

Editor’s Note: As the 20th anniversary of 9/11 approached, we asked local citizens to share their thoughts and memories of that day. We appreciate everyone for sharing.

Hiring firefighters who weren’t alive for 9/11

“I can remember it was my off day and being awakened by a friend frantic concerning the attacks. It was a horrible day indeed with so much uncertainty.

Starting with what was believed to be a terrible accident, and later realizing we were under a coordinated attack left Americans from a National level all the way down to a local level lost and wondering.

We had no idea how in-depth this murderous attack could have been. Everyone was on high alert and there was extreme chaos.

But I do remember Americans quickly coming together on one accord with one desire. If not but just for one moment there was no separation among nationalities or races or anything. There was one United States of America with a defined objective that included the safety of its people and justice for all.

It is amazing to think that this terrible event occurred 20 years ago. We are hiring firefighters now that were only months old during the attack.

Though it’s hard to continually re-live the moments of 9/11, this is a history we cannot ignore. We cannot forget those heroes that gave the ultimate sacrifice for those in need during one of the worst days in American history.” — Marshall Fire Chief Reggie Cooper

Trying to find out information at a U.S. Consulate

“It was evening in Chengdu, China on Sept. 11, where I taught English at Sichuan University, twelve hours ahead of Central Time in the U.S.

My son called from a high-rise office tower in downtown Chicago and told me in a surprisingly calm voice of that day’s horror. There was fear that other large cities were still at risk and he had helped evacuate the floor where he worked.

My mind raced, trying to keep up with the horrendous things he was telling me, trying to take it all in. When we hung up, my body was shaking. Nothing seemed real. I worried about my son getting home safely and there would be no sleep for me that night.

The next morning, in a daze, I made my way to the U.S. consulate not far from my apartment. When I arrived, there were other ex-pats presenting their passports to go through the gates. They were all there for the same reason I was there: to be with fellow Americans. To be at the next best place we could call “home.” Seeing our glorious flag flying inside the gate lifted our spirits.

Inside the consulate, we were ushered to a back room where we could watch and hear the news commentators on a large TV. We sat transfixed, the only sound beside the television came from those of us who were weeping. Nobody left their seats for the longest time. Except for whenever the flag came into view on the screen.

Then we would all stand. What else could we do?” — Meredith McLeod Dunton

20 and 16 years later, I am alive to talk about two different National events

Remembering two different tragic events in a life is important to me, because first, I experienced 9/11 the worst, and the second, was Hurricane Katrina.

At that moment, I said that this is a terrorist act that hit the buildings, not one of the news planes. At that time, I saw the fire and smoke on the towers as they were burning and eventually coming down.

I got up, dressed to check on my sister, Velma Banks who was working the polls in the neighborhood to tell her the news. There was no phone service at the time. They had already heard the news and closed the polling place and told everyone to go home.

About an hour later, my father called to see if all was well with us. Two minutes later a call came from Mrs. Wilson to see if we were OK and with that my telephone went dead, and it stayed dead for about three days. Cell phone were not part of our lives at that time, so I had no communication with the outside world. I was afraid of what was to come. I lived where the only way to get out was to swim, and I can’t swim and am afraid of water.

Sixteen years later I remember the impact Hurricane Katrina had in 2005 when people were evacuated from New Orleans to Marshall Convention Center. When Hurricane Rita hit Houston, Port Arthur and Galveston, where I volunteered to serve in the kitchen serve the evacuated people. Serving the evacuated people was one of the most rewarding experience I have ever had.

That is the experience that I had and I am happy to share about 9/11 and Katrina.

Additionally, regarding about 9/11. I was afraid to ride the trains for a while, and the trains that I used did not open the doors at the affected stations. The smell and smoke traveled to my neighborhood from about 56 blocks away. Everything was closed for about three days until it was established that everything was under control. The smell and smoke lingered for months.” —Marshall resident Lillian Banks

Being hyper-aware and vigilant

“I was with the Collin County Sheriff’s Office and we all watched in disbelief when the planes hit the buildings.

The sheriff sent every deputy to assigned areas in the county to park and be able to respond to any needs that the police in Plano, McKinney, Frisco, or other areas that might need “back-up” in the event of splinter groups or “sleeper-cells” activity.

After the initial shock of the attack, we were all very hyper-vigilant and aware. The disbelief of folks that anything like that could happen was on everyone’s mind.” — Harrison County Sheriff’s Office Lt. Jay Webb

“I vividly remember the events as they unfolded on Sept. 11, 2001. I was working as a Special Agent with the FBI assigned in the Tyler office. As I was in my office, the stories of an aircraft striking one of the towers of the World Trade Center in NY, NY was on every television station. It struck everyone odd that a large aircraft would hit the building. At first, no one realized that we were under an organized terrorist attack.

As the events unfolded, a second aircraft struck the second tower and there were reports of a third aircraft being “high-jacked.” It was then when everyone realized it was an organized attack.

I was saddened when the towers fell, taking the lives of thousands of Americans. I can still see the images from the live broadcasts of the towers falling and the long list of people who were killed that day.

This event effected my career and in many ways my life.

I worked for over a year in assisting in the investigation. This event led to me being promoted and assigned to the FBI International Terrorism Unit in Washington D.C. where I continued to work on terrorist cases from 2008-10.

This event also led me to working in Doha, Qatar and Iraq as part of the Saddam Hussein trial in 2006.

I have met numerous individuals and coworkers who were at the World Trade Center when the towers fell. I have heard their stories and the stories of those who died that day.

I will spend some time on 09/11/2021, to reflect on the past, reflect those lost, and reflect on the heroes who rushed into the chaos to save others. I will honor their memory and pray for their families who still mourn. I hope that America never forgets!” Marshall Police Chief Cliff Carruth.