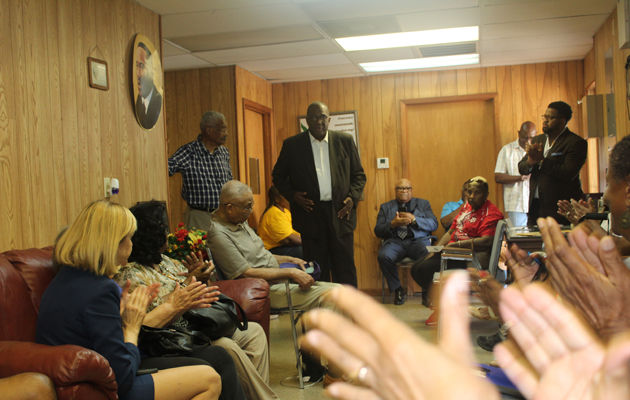 State Sen. Royce West, D-Dallas, receives applause from a crowd at the Harrison County NAACP during a stop in Marshall while on the campaign trail in his run for the U.S. Senate seat currently held by Republican John Cornyn. 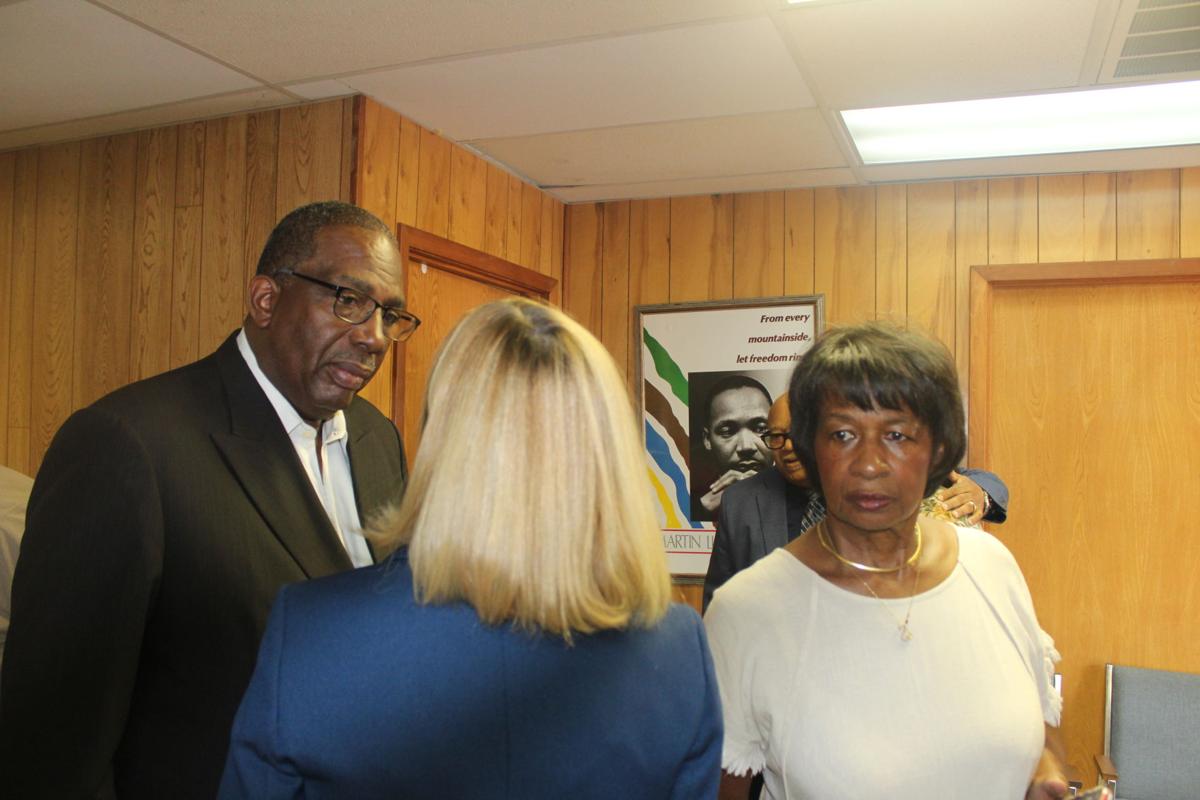 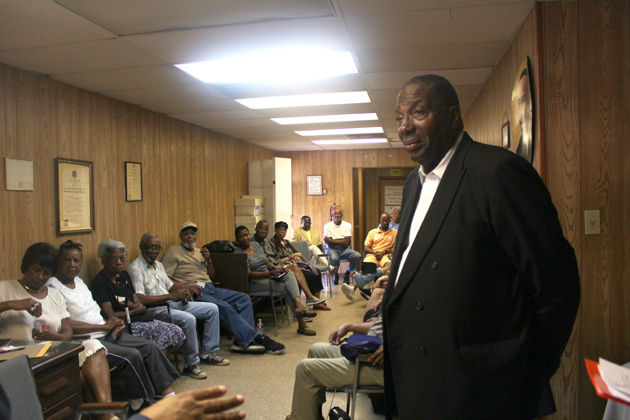 State Sen. Royce West, D-Dallas, visits with a crowd at the Harrison County NAACP while on the campaign trail. 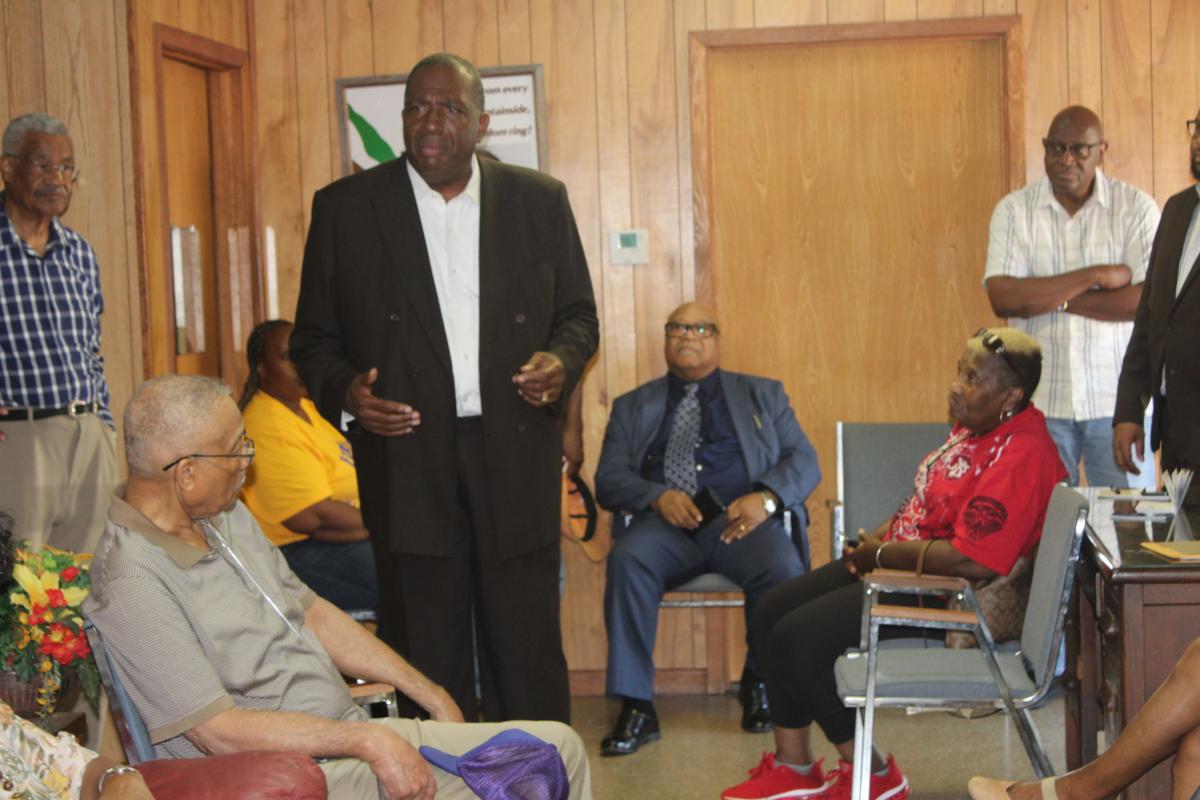 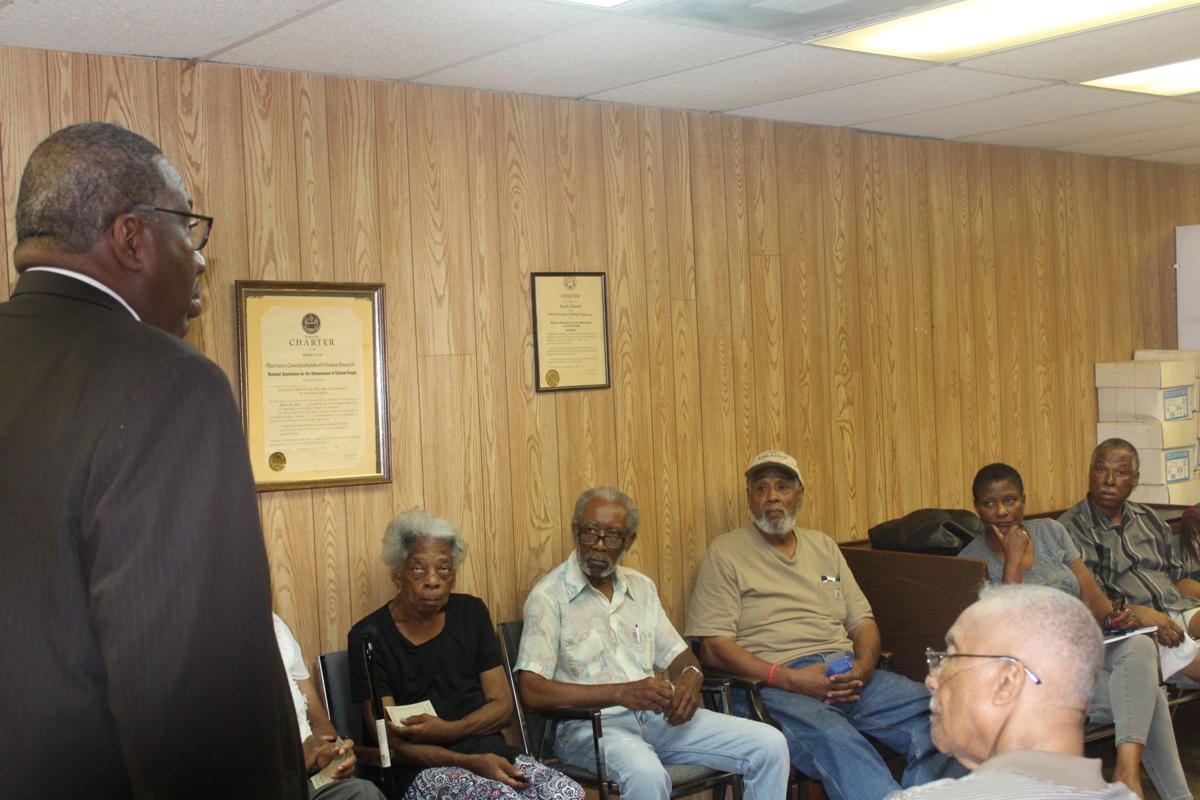 State Sen. Royce West, D-Dallas, addresses a crowd at the Harrison County NAACP Branch while on the campaign trail.

State Sen. Royce West, D-Dallas, receives applause from a crowd at the Harrison County NAACP during a stop in Marshall while on the campaign trail in his run for the U.S. Senate seat currently held by Republican John Cornyn.

State Sen. Royce West, D-Dallas, visits with a crowd at the Harrison County NAACP while on the campaign trail.

State Sen. Royce West, D-Dallas, addresses a crowd at the Harrison County NAACP Branch while on the campaign trail.

State Sen. Royce West, D-Dallas, returned to his Harrison County roots last week and addressed an audience at the Harrison County NAACP while on the campaign trail in his run for Sen. John Cornyn’s seat.

“I have friends here in Marshall. I have roots here in terms of my work with (the late local NAACP president) Charles Wilson; she was a very good friend,” West said. “So I wanted to make certain that I came back here, let people that I met in the past and new people know who I am and that I’m running for the United States Senator.”

West has been on the campaign trail for the past two months. Marshall was his 10th city to visit. Attendees at the campaign stop last week thanked him for coming to Marshall to share his platform. As a former Dallas resident, Marshall City Commissioner Vernia Calhoun said she, for one, can attest to the leadership West has shown.

“I lived in the Dallas community for years. Thank you for your service,” Calhoun told West. “I know the service that you have done for the city of Dallas and what you’re capable of doing; and I’ve always voted for Royce West when I was in Dallas.”

Rene’ Keys, daughter of the late local NAACP president Mrs. Charles Wilson, recalled how instrumental West, a lawyer, was whenever her mother called on him to assist a resident in need.

Keys said West has never outgrown his service in the community.

“A lot of people didn’t know who was really behind the scenes,” said Keys. “I commend Sen. West. He is what you see.”

“I do want to say thank you because I probably can speak for a lot of people in this room that, sometimes we feel like our voices aren’t heard because of representation; and it’s so great to know that there’s a senator in Dallas who does speak for some of us,” Anderson said.

“So I just want to thank you for the years that you’ve done that,” she told West, describing him as a “staunch” leader.

Sharing why constituents’ “choice should be Royce,” West cited the broad support he’s garnered from colleagues in both the House and Senate.

“I think that people, in deciding to support me, (should know) there are 12 state senators that are Democrats in the state of Texas; 10 of them have endorsed me,” West said. “There’s 67 (Democrat) House members; 48 have endorsed me.”

“That says something about me as a person, that I have that broad-based support,” West said. “They’ve looked at my past and as a result of working with me, going in my past, they are supportive of me.”

West told supporters the 2020 election is more important than ever. West’s top priorities include making certain that the country is reunited.

“It’s divisive as I’ve ever seen in my life,” he said.

A supporter of rural healthcare, West said he also wants to make certain that health care becomes a basic right for all citizens. Women’s rights are also important to him in terms of their own healthcare.

“…That we have gun sense, but we still maintain the intent of the Second Amendment,” he said of the amendment to the constitution that protects the individual right to keep and bear arms.

Climate changing issues are also important to the state senator as well as border-related issues.

“Do we have a problem at the border? Yes, we do,” West said. “But is the answer separating families? No. There’s got to be a more humane way in order to get those things done. Do we need more resources there? Yes. In terms of getting more judges to get people through the process as expeditiously as possible, we need to do that.”

He noted that House Speaker Nancy Pelosi, who is leading the impeachment inquiry against President Donald Trump, has shown great steel in terms of being the leader of the House.

“We need to show the same amount of (steel) in making certain that we do what’s necessary in order to get people registered and that we get them out to vote,” West said. “It’s going to be up to people here in Harrison County to do just that.

Local NAACP president Jim McCutchens said he’s glad the branch had the opportunity to host West. He said the connection was made possible through former Harrison County Justice of the Peace Kent Alford.

“It was fantastic and it was my first opportunity having met him,” said McCutchens. “He mentioned that he kind of started here in Marshall/Harrison County as an attorney in this area, so this is like home for him.”

West is a managing partner at West & Associates LLP. He was first elected to the Texas Senate in November 1992. During his tenure, Sen. West has been named by Texas Monthly as one of the 25 most powerful people in Texas politics; been selected for the magazine’s biennial “Ten Best Legislators in Texas” list; and has twice been named as an “Honorable Mention.” West has also received mention on the Associated Press’s “Movers and Shakers” list, and Texas Insider named West to its 2009 “Best Legislators” list.

West authored Senate Bill 158, which passed by the Texas Legislature in 2015 and establishes statewide policy on the use of body-worn cameras by law enforcement. The bill also provides a grant program to assist law enforcement agencies in purchasing cameras.

Additionally, in 2001, he introduced Senate Bill 1074 — which provided $18.5 million in state funding to purchase 7,550 in-car/dashboard cameras for patrol cars across the state, which reduced the number of frivolous complaints against police officers and helped to resolve judicial disputes.

His website, roycewest.com, says that he advocated with parents and teachers to achieve world-class education for students, championed criminal justice reform and supported workers seeking fair wages, among other things.