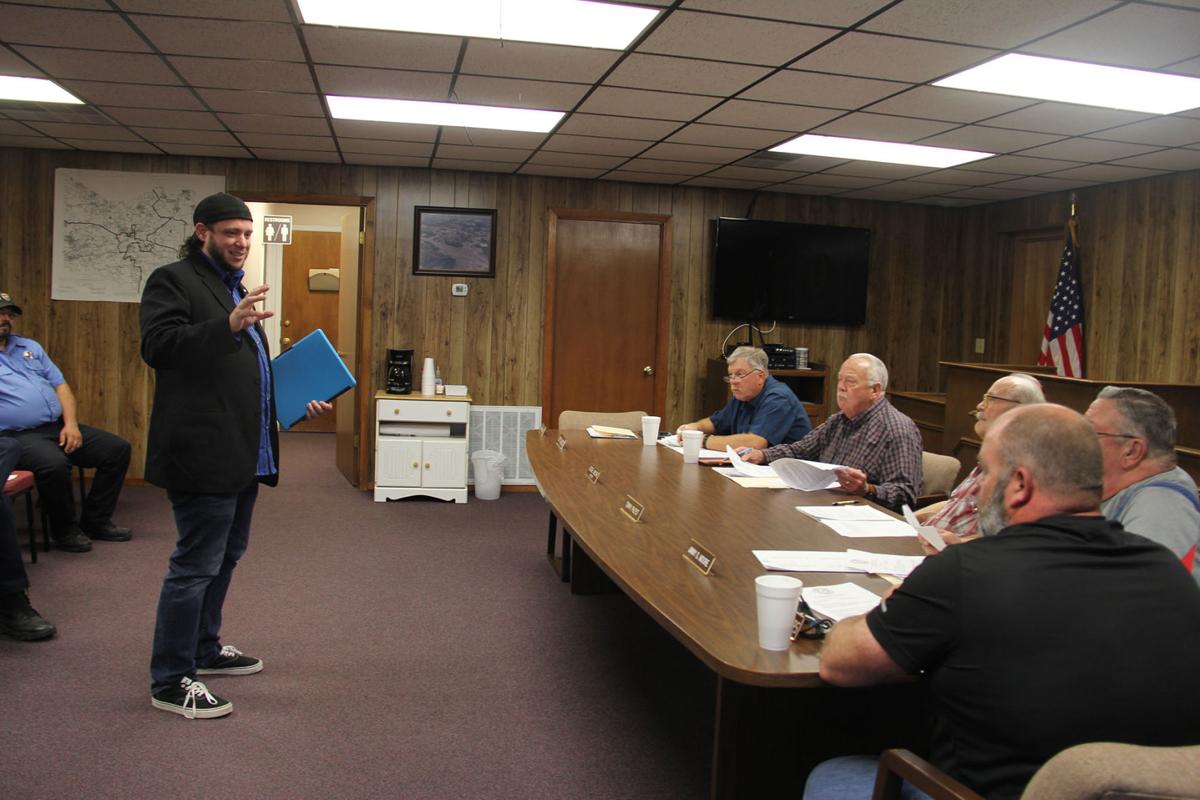 Mark Lee Dickson Director of East Texas Right to Life addresses the Waskom City Council on Tuesday.Dickson continued to say if NARAL Pro-Choice Texas and Lilith Fund want to spend more money on “Abortion is Freedom” billboards in the sanctuary cities, just like the ones the organizations erected after Waskom outlawed abortion, then he welcomes them to do so. 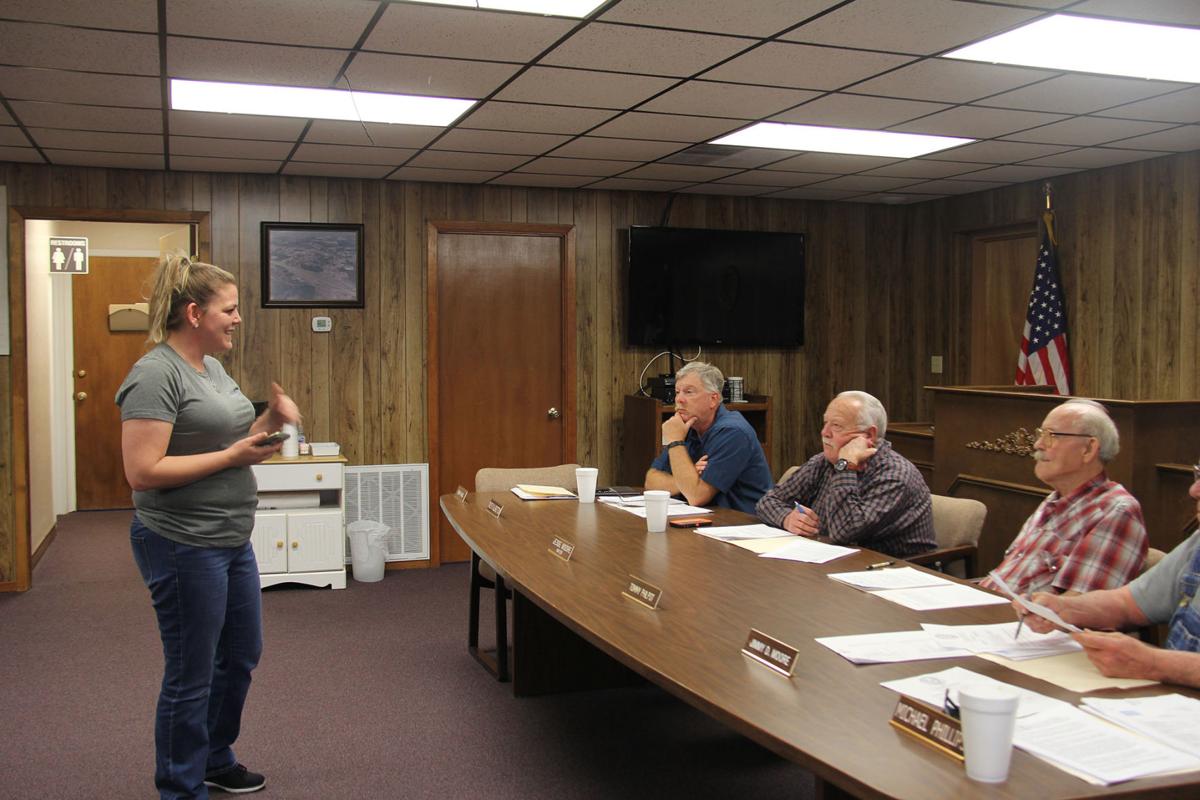 Katie Morris, a resident of Levelland and a supporter of Right to Life, thanks the Waskom City Council for being trailblazers.

Mark Lee Dickson Director of East Texas Right to Life addresses the Waskom City Council on Tuesday.Dickson continued to say if NARAL Pro-Choice Texas and Lilith Fund want to spend more money on “Abortion is Freedom” billboards in the sanctuary cities, just like the ones the organizations erected after Waskom outlawed abortion, then he welcomes them to do so.

Katie Morris, a resident of Levelland and a supporter of Right to Life, thanks the Waskom City Council for being trailblazers.

WASKOM — The Waskom City Council, on Tuesday, approved an amendment to its abortion ban ordinance, in response to a lawsuit filed in late February by the American Civil Liberties Union against the city and six others that passed similar ordinances.

“We said before that the lawsuit brought by the ACLU on behalf of the Lilith Fund and the TEA (Texas Equal Access) Fund against seven of our sanctuary cities for the unborn was without merit,” said Mark Lee Dickson, director with Right to Life of East Texas. “We stand 100 percent behind this statement.”

The American Civil Liberties Union announced Feb. 25 it had filed a lawsuit on behalf of the two abortion funds to challenge abortion ban ordinances passed in seven East Texas cities.

The lawsuit noted that both groups are labeled “criminal entities” under the abortion ordinances. It accuses the ordinances of being unconstitutional and violating the abortion funds’ rights to free expression and association under the First Amendment.

Speaking at the city council meeting Tuesday, Dickson assured there was nothing in the Waskom ordinance that was unconstitutional.

“The amended ordinance adopted by the Waskom City Council was adopted on the advice of our expert legal counsel for the purpose of the unification of all ordinances and in the preparation of a swooping legal victory for the seven sanctuary cities for the unborn, which were sued,” said Dickson.

In support of Right to Life East Texas, the city of Waskom unanimously approved its ordinance in June 2019, becoming Texas’ first “sanctuary city for the unborn.”

“Right to Life approached us because the abortion laws are changing in Louisiana, Alabama and Mississippi that the abortion clinics may start moving to Texas,” Waskom Mayor Jesse Moore, explained at the time. “With Waskom being the first city, 18 miles (west) from (Shreveport) Louisiana, they were anticipating one moving over here.

“The citizens in Waskom, they don’t want to have an abortion clinic in Waskom, so they presented the board with an ordinance and resolution that will make abortions in the city of Waskom a criminal offense,” the mayor said.

Dickson said the amendments were made on Tuesday not only in response to the lawsuit filed, but to make the ordinance even stronger.

“Before, the Waskom ordinance allowed for elective abortions in the cases of rape or incest,” explained Dickson. “Now those exceptions have been removed. Now we can truly say all surgical and medical abortions have been outlawed in Waskom.”

Thus, Dickson said if the Lilith Fund pays for an abortion that takes place within the city limits of Waskom, the organization will still be breaking the law.

“The demonic and predatory organization is, by no means, above the law,” he said.

Dickson continued to say if NARAL Pro-Choice Texas and Lilith Fund want to spend more money on “Abortion is Freedom” billboards in the sanctuary cities, just like the ones the organizations erected after Waskom outlawed abortion, then he welcomes them to do so.

“From day one, they treated what happened in Waskom as what happens when ‘old white men’ lead,” said Dickson. “It can also be said, from day one, these groups have ignored the fact that Waskom’s City Hall was full of women standing in favor of their city council’s decision on the day of the vote. In that response we were very clear when we said, ‘If NARAL Pro-Choice Texas and the Lilith Fund want to spend more money on billboards in those cities, we welcome them to do so. After all, the more money they spend on billboards the less money they can spend on funding the murder of innocent unborn children.”

Dickson said he has the same sentiments in regard to this lawsuit. He said the only difference is that in the case of legal challenge, the cities in suit have the opportunity for a victory in the courts.

“When this lawsuit is over, abortion will still be outlawed in every city, which has this ordinance in effect,” he said.

Jonathan F. Mitchell has been retained to represent all defendants in the lawsuit, which are Waskom, Naples, Joaquin, Tenaha, Rusk, Gary and Wells. The former Solicitor General of Texas, who has been nominated by President Donald Trump to become Chairman of the Administrative Conference of the United States, is representing the defendants at no cost to the cities or taxpayers.

“He’s that confident in what we’re doing here today,” Dickson said of Mitchell.

“We are willing and prepared to go to the Supreme Court, if necessary, to defend these constitutional ordinances enacted to protect baby Texans from the baby murdering industry,” said Dickson.

Dickson said they believe the pending lawsuit will be dismissed, because he believes the claims are without merit.

“Calling them a criminal organization is not all that important because if an abortion is committed here or if they pay for an abortion, they’ve broken the law – period,” Dickson explained. “Ultimately this prevents the abortion industry from doing what, in the past, they have mentioned doing in Waskom.”

Dickson said since Waskom paved the way, they’ve gotten letters of support from tons of representatives, senators and individuals from across the state.

One supporter, Katie Morris, traveled nearly eight hours from her residence in Levelland to express her gratitude on Tuesday.

“My biological mother had tried to abort me on two different occasions and she finally chose life for me; so when y’all take a stand like this y’all are sticking up for every person who has already been aborted,” said Morris.

Morris said Waskom has set the standard in Texas.

“Y’all were courageous and bold and y’all moved forward with it. I just wanted to say thank you very much. Keep doing what y’all are doing,” she encouraged.

The city of Waskom amended its abortion ban ordinance, in response to a lawsuit filed in late February by the American Civil Liberties Union a…