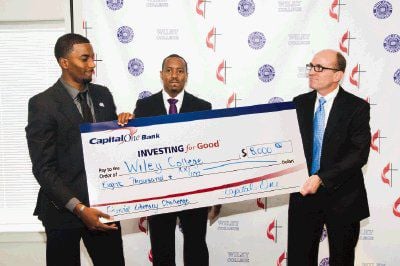 Taylor Jacobs, student president of the Financial Literacy Organization of Wiley College is pictured with Kareem McLemore, Associate Director of Financial Aid at Wiley College and Mark Loughmiller of Capital One Bank. 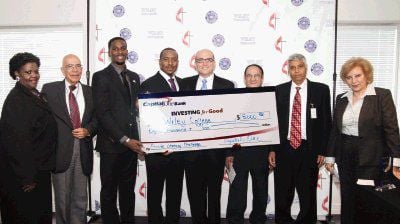 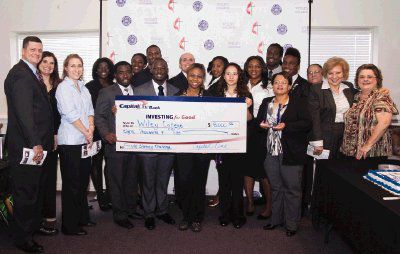 Taylor Jacobs, student president of the Financial Literacy Organization of Wiley College is pictured with Kareem McLemore, Associate Director of Financial Aid at Wiley College and Mark Loughmiller of Capital One Bank.

The Financial Literacy Awards program identifies community organizations that strive to help inform numerous audiences of the importance of financial literacy. Last year Wiley received a similar award from the bank in the amount of $4,000.

"This is amazing, simply amazing," said Taylor Jacobs, President of Financial Literacy Organization of Wiley College (FLOW). "We are so thankful of Capital One in doing this for us."

The award came as a surprise when Wiley was honored for its efforts. Mark Loughmiller, the bank's East Texas area president, attended the ceremony to congratulate Wiley on the honors.

"I'm so pleased to be a participant and offer something like this to Wiley," he said. "Wiley was one of three finalists for this award, and as a group, Capital One selected Wiley in the summer."

Wiley was selected to receive last year's grant due to the creativity Capitol One found in the college's proposed community financial education program. Prior to receiving the original $4,000 grant, Wiley worked with the bank and Everfi, Inc. to host a financial scholars program as part of the freshman seminar. There, students were taught important skills on handling money before and after graduation.

"We wanted to find out how we could help financial literacy in our East Texas communities," Loughmiller said. "In late 2012, we requested propositions from organizations with financial literacy promotion plans in about a 12-county area in East Texas. We received around 20 proposal plans."

Since last year, Wiley College has continued to make efforts to promote financial literacy in the community. One such example occurred earlier this year when members of the group stopped by Marshall High School to give the rundown on topics such as establishing credit and identity theft. More than 300 students were reached through the program in a single day.

In April, Wiley created the FLOW program dedicated to raising awareness on financial literacy. Wiley students also presented at the Academy of Business and Public Administration Discipline Conference on the subject. These combined efforts by the Wiley community helped spur Capitol One's decision to award the local school the grant.