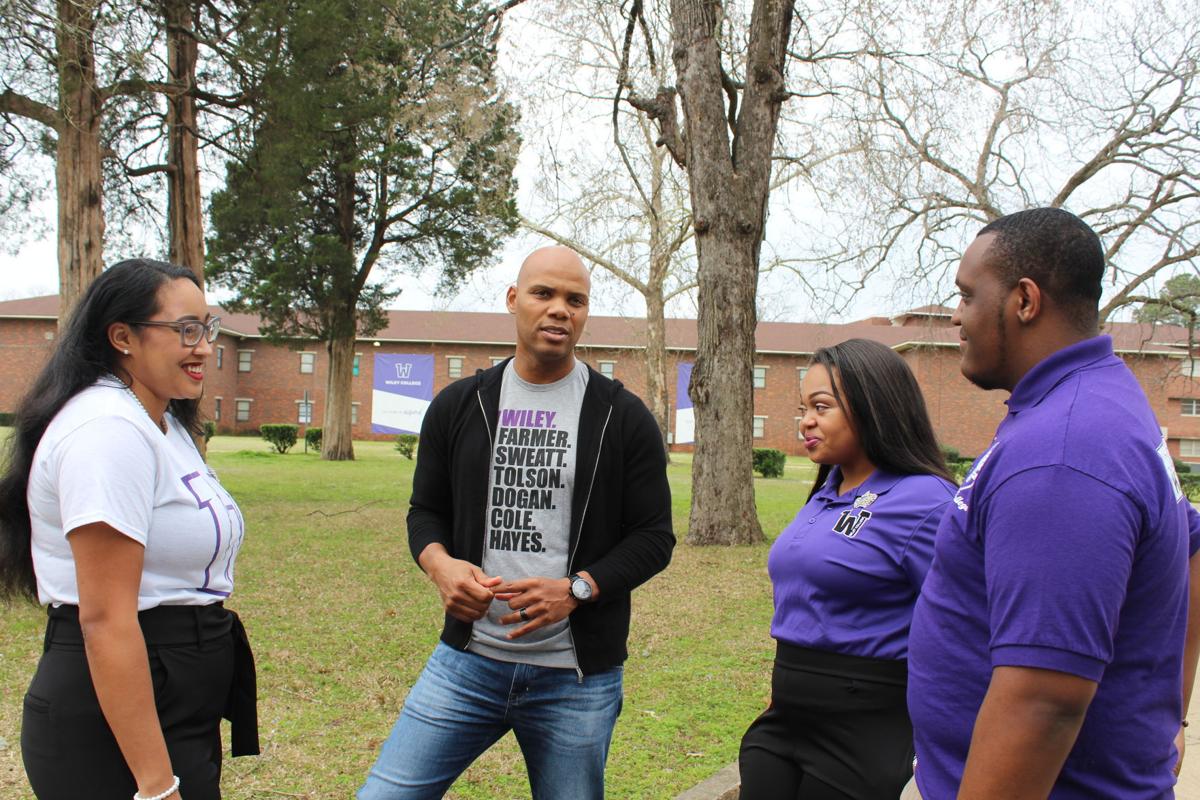 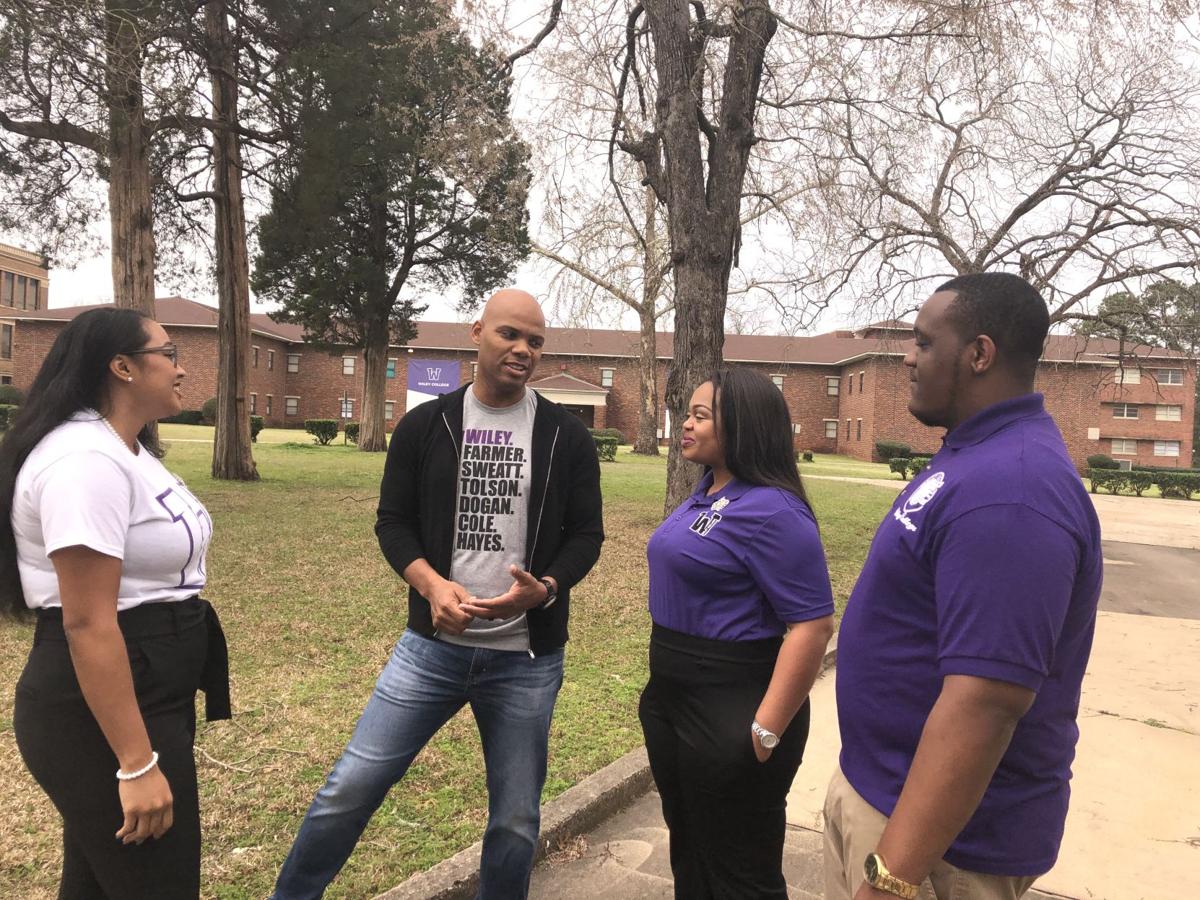 Wiley College President Dr. Herman Felton Jr. visits with students on campus. The college is launching a campaign to boost enrollment by creating micro-grants, an on-campus food pantry and a tuition reduction.

Wiley College President Dr. Herman Felton Jr. visits with students on campus. The college is launching a campaign to boost enrollment by creating micro-grants, an on-campus food pantry and a tuition reduction.

Wiley College will soon carry the title of the most affordable HBCU (Historically Black College and Universities) in the state, thanks to a new campaign the university is rolling out in January called, “Wiley Cares.”

The new campaign is set to change not only how the university operates in regards to tuition and student debt, but also seeks to change the culture on campus to provide a more well rounded graduate and college experience, Wiley College President Herman Felton Jr. said on Tuesday.

The multi-tiered campaign includes a major tuition reduction, the creation of an on-campus food pantry and micro-grants for students, and a reclamation initiative for students who have previously dropped out.

“After 18 months being on the ground and officially a year (as university president), we’ve done environmental scans and looked at our students and tried to figure out exactly how we could service them better on several fronts — their academic experience, enrichment, then the elephant in the room is really student debt, poverty for first generation students,” Felton said. “All of these things really touch attrition or matriculation and over the course of the year, in concert with the board, we have been trying to figure out how do we reduce the amount of prohibitors from student success and retention.”

Specifically, Felton and the board cut student tuition costs across the board from $21,000 per year for a full-time student, including room and board, to $17,500 per year.

Felton said incoming freshman were snowballing in tuition debt each academic year they progressed, eventually leading almost a third of the university’s students to drop out during the 2018-19 school year.

“An incoming freshman from Texas can receive a maximum of $16,000 in financial aid and pell grants per year,” he said. “Our students come in having to come up with more than $4,000 and by the next year it becomes more than $8,000. We realized this was a problem. Between 2018-19, 356 of our students had dropped out because of debt. That would signify close to 25-30 percent of our students. So, we knew that the tuition and affordability piece had to really line up. We want to be attractive not just for the affordability but because we are providing a quality education.”

The second component of the “Wiley Cares” campaign is the university’s local answer to what has become a problem for college and university students across the nation — hunger.

“Students are having serious issues all across the nation,” Felton said. “They come here with little to no resources and after the meal plan is exhausted, during three times a day, from 7 p.m. to midnight, that’s when I would argue life really starts for most of these students and they don’t have options, so we are creating a food pantry that would allow our students to find nourishment in some small way, to assist.”

In addition to the creation of an on campus food pantry for students that will be manned by university employees, Felton and the board are creating micro-grants for students.

“We are launching our micro-grants program that will give students $100 to help with necessities,” he said. “Some of our students come with challenges that having those resources will reduce stress on having to figure out how to make ends meet.”

Felton said student involvement on campus is key to a student sticking it through until graduation but many will become disengaged if they are worrying about how they can afford toiletry and hygiene items, how they can wash their clothes and other basic necessities.

Felton said while the college hopes community members will partner with them to help supply the student food pantry, he feels the micro-grants are mainly the responsibility of the college and he and his wife Katherine Felton led the call to action by donating $2,500 to the micro-grants program for students.

Felton said university board members and alumni will also generously pledge to donate to the micro-grants program and students will be awarded grants next year following an application process.

The micro-grants can be used by the students to relieve any pressing needs or necessities they might face.

“It’s a silent epidemic across the nation, not just at Wiley College, HBCUs don’t have the market on it — private, public, large, small — all institutions across America are having challenges with the cost of education and it’s leaving people to wonder, ‘Is it really worth getting an education?’ We say, ‘yes,’ a liberal arts degree is a strong foundation for you being a better person and having a global and holistic view on society that allows you to be a productive citizen. We believe getting an education is important and it is a costly venture but I think institutions now have the onus to look at their fixed costs and figure out what can go away and what needs to stay without compromising the quality of the education, so that we’re not passing off generational debt to students.”

Earlier this month, the university’s Career Center launched its new Career Closet which allows students to visit the closet and select a professional outfit including clothes, shoes, belts and other items needed to attend a job or internship interview.

The last component of the new “Wiley Cares” campaign, which students first learned about during chapel service on Tuesday, is the student debt forgiveness for drop out students, in an effort to have them return and graduate.

“The reclamation process will allow us to reach out to those students who have stopped out and say to them, ‘hey, if you’re interested in coming back to college, we are willing to forgive the debt that you have and that will be predicated on your matriculation,’” Felton said. “So, what you come into in the fall of 2020, will be a tuition that’s $3,500 less than what you had in the past and whatever debt you had, we will hold that until you graduate and then wipe that clear. We don’t want a situation where we wipe the debt out and they take their transcript and go somewhere else but we want to help them.”

“We’ve got to figure out how to do something that shows them that we care about them as well,” he said. “That may be looking at a percentage of the debt, them being able to come up with a percentage of the debt and then moving forward. Our goal is to have our students leave this college not owing the college anything and owing the federal government as little as possible.”

Through “Wiley Cares,” which will have its own website with resources and instructions for students at, www.wileyc.edu/wileycares, Felton hopes students will now have the tools and the support they need to succeed and thrive.

“We don’t want our students to just come and get through college, we want them to have a productive time while they’re here and engage,” Felton said. “We know if they’re engaged, the propensity for graduation on time is significantly better if you’re involved in campus activities. This initiative is really about making sure we do our part and we understand that we have not just a fiduciary responsibility to educate people and make sure they get a quality education, but from the very birthing of HBCUs, there’s always been an extra special sauce at these institutions and I think it would be an affront to the graduates and the founders for us to not recognize that there are some issues that we need to address. We want our students to walk away feeling as though we care.”

Felton said the “Wiley Cares” campaign should pay for itself if it accomplishes the perceived goal of keeping students enrolled until graduation and enticing more students to enroll at the university.

“If you think about tuition reduction, it’s not collectible, we are literally carrying debt over the course of years and eventually taking hits on our audit because we have to write it off — it’s bad debt, un-collectible debt,” he said. “We believe in looking at studies all across America for the past year and we found institutions similarly situated like Benedict College in Columbia, South Carolina who reduced their tuition and saw an increase. They realized more students and more revenue because of the cost. It sort of balances itself out. We need to recruit more students.”

Felton said he believes the new “Wiley Cares” campaign will be the key to increasing enrollment and seeing students through to graduation.

“Our board and our administration cares,” he said. “We want to be holistic in our approach and demonstrate that we care.”