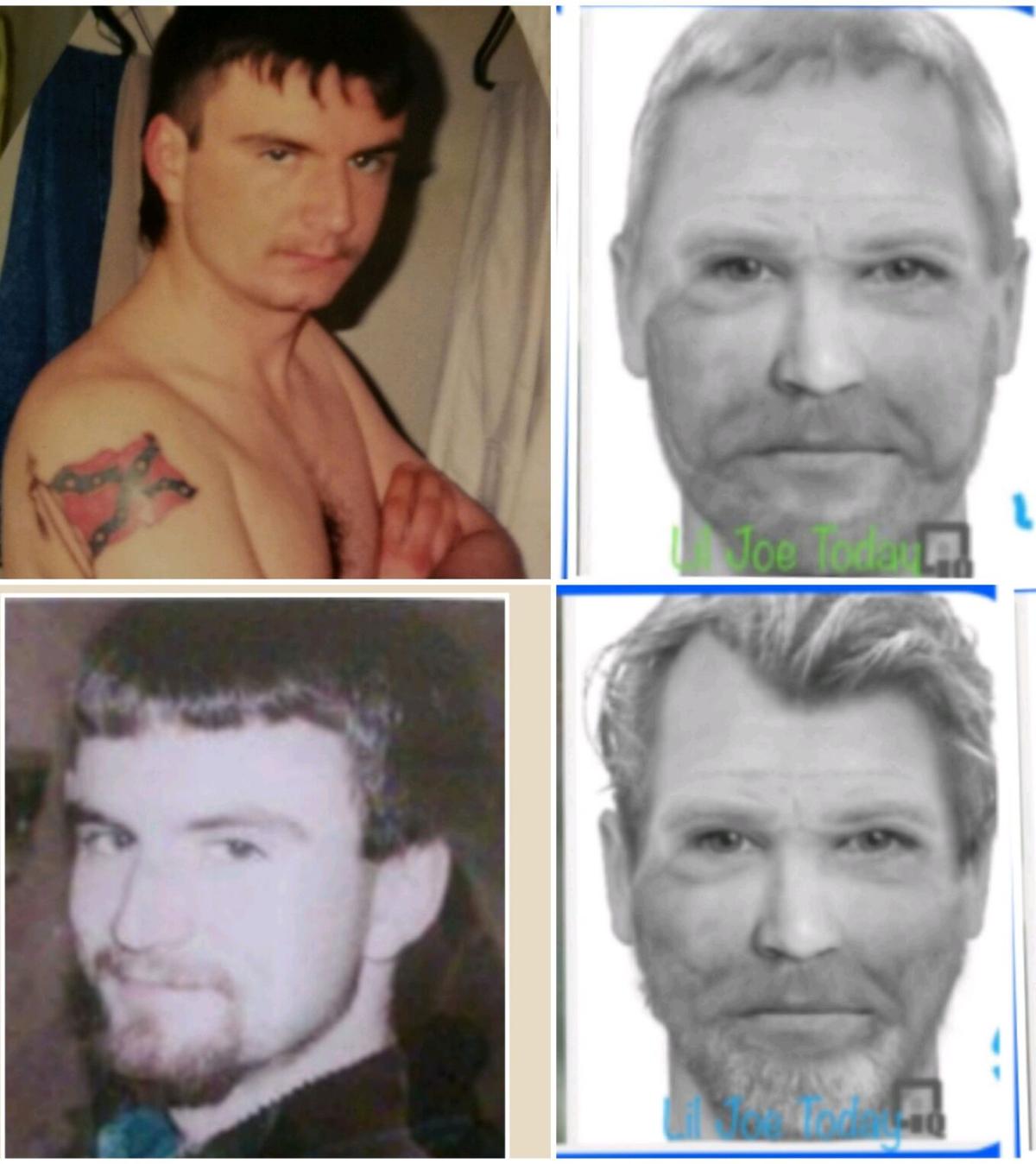 Frederick Joseph Boehm, with age progression photos to see what he would look like 20 years after he went missing. 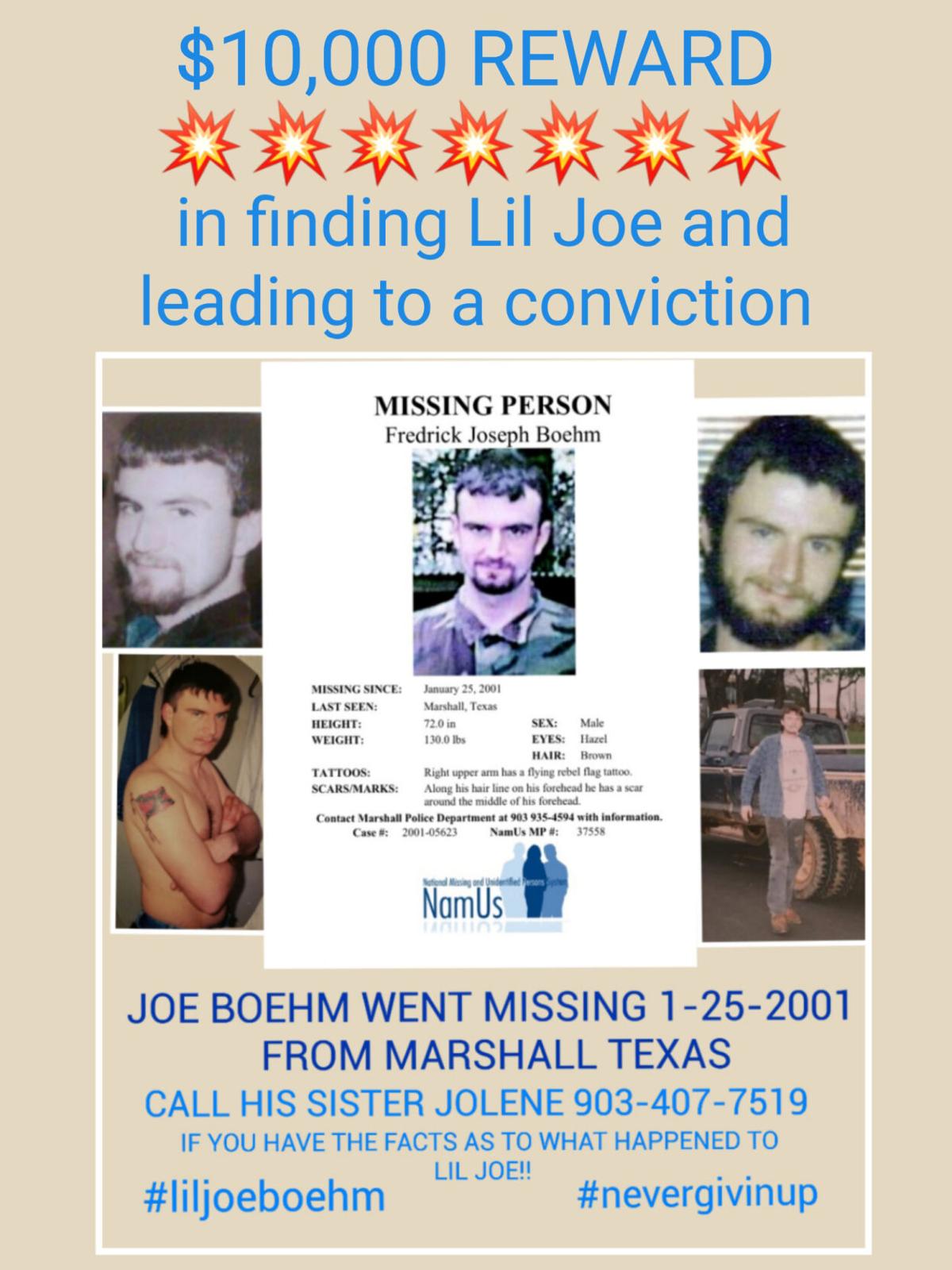 A flyer offering a $10,000 reward for information leading to an arrest, and finding Frederick Joseph Boehm.

Frederick Joseph Boehm, with age progression photos to see what he would look like 20 years after he went missing.

A flyer offering a $10,000 reward for information leading to an arrest, and finding Frederick Joseph Boehm.

Jolene Oney, Boehm’s sister, has spent the last 20 years looking for him, or at the very least, looking for answers to what happened to her brother. That search has not ended yet.

“I have wanted to leave Marshall for years, for my entire life. But I can’t because I’m tied to here. Little Joe has me tied to here,” Oney said.

On Jan. 25, 2001 Boehm was living with his friend, Coley Briggs, along with Briggs’ family, which included his girlfriend and their children. Briggs’ mother was also present during that evening, visiting her son’s home.

Between 11 p.m. and midnight, the night Boehm went missing, the house phone at the Briggs home rang, and when someone picked it up, the unknown caller asked for Boehm.

Reports stated that Boehm was already dressed for bed at this point, which Oney said leads the family to believe that Boehm was not expecting to hear from anyone that evening.

After the call, the contents of which are unknown, Boehm reportedly got dressed and left the dwelling, walking towards downtown Marshall, informing the Briggs family as he left that he was not planning to return that evening.

He was never seen again.

Oney said it was 10 days later, on Feb. 3, 2001, that she received a call from Briggs asking if she knew where Boehm was, and telling her for the first time that no one had seen him in over a week.

“He called me and asked if I had seen Little Joe recently, and when I said I hadn’t he told me that he hadn’t seen him in over a week,” Oney said. “My heart dropped.”

She said that it was not unusual for her to go a few days or weeks without speaking to her brother, since the both lived in town and were able to see each other whenever they wanted, so she had no idea that something may have happened to him.

The search for Little Joe

For 20 years now Oney has been searching every face on the highway, looking in the eyes of every homeless person she sees, searching for a glimpse of her brother.

Fowl play is suspected in the disappearance of Boehm, but the family has nothing but rumors to go off of, with no solid evidence of what happened to him.

Last year, Oney even went on a podcast about missing people, titled “Unfound” to discuss Boehm’s case. The episode can be found online for free, and is No. 205.

Boehm’s face is all over social media, through Facebook pages designated to finding missing persons, to news articles and television specials.

Flyers featuring photos of Boehm’s, some of which were age progressed to show what he may look like now, are put up regularly by Oney and her family.

During the beginning, when Boehm first went missing, Oney said that she worked nonstop to find out what happened to him.

She said that after the first few months of help from the police, she has not heard from them in many years, and largely feels like she is continuing the search on her own.

Two community members did come forward about a week after Boehm was reported to the police as missing, reporting seeing a man matching his physical description walking around different parts of Marshall.

Oney has searched these areas herself, as well as other wooded areas across Marshall that she has received tips about, with many people claiming that Boehm is dead, and buried in different locations.

The last report Oney received from the Marshall Police Department was actually information from a psychic that one of the officers on the case asked Boehm about.

Oney herself has even contacted this woman, more than once, and is working on other similar ways to get any information she can about her brother.

“In the beginning, I trusted the police, I thought that they would be able to find my brother. But now, after I have been ignored, and treated so disrespectfully, I don’t trust them to do it anymore,” Oney said.

When Little Joe disappeared he was just 23 year old. He was unmarried, and has no children, though he did have a girlfriend when he went missing.

Oney described him as a bit of a loner, a man who grew up in Marshall and spent his entire life here. Boehm was an outdoors man, and loved to fish and to hunt just like his family always had.

He was also known to tinker with items, always looking to know how they worked.

“He’s curious,” Oney said. “He wanted to know how everything operated. And that sometimes, led him to be a bit accident prone.”

Oney said that for the majority of their childhood, it was just her, Little Joe, and their brother, whom she refers to as Junior, with their parents. She said that all three of them were close, with Boehm and Junior even sharing the same birthday.

“He was one of those people who would help you no matter what,” she said.

When both of their parents died in the 1990s Boehm was still in school. Oney said that it was a hard time for him, with her living outside of the house with her now husband.

Boehm was known to use drugs, and had crashed flipped his truck shortly before he went missing, which was the reason he was living with the Briggs family.

“It seemed like no one cared when he went missing because he didn’t have kids, so they all thought he just left, but he would never do that, they didn’t know him,” Oney said. “He deserves to be found just like everyone else.”

Anyone with information on Boehm’s disappearance should contact crimestoppers at 903-935-4575 or contact Oney’s family directly through the information on their flyers.