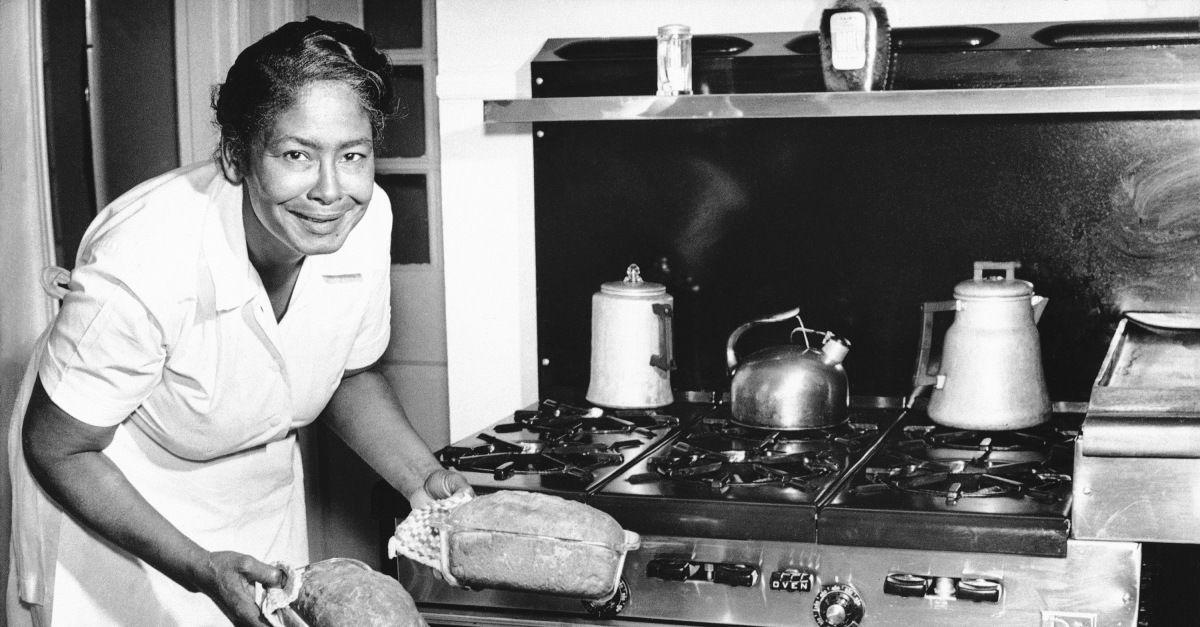 Zephyr Wright, the White House cook, takes loaves of fresh baked bread from the oven in Washington in 1961. 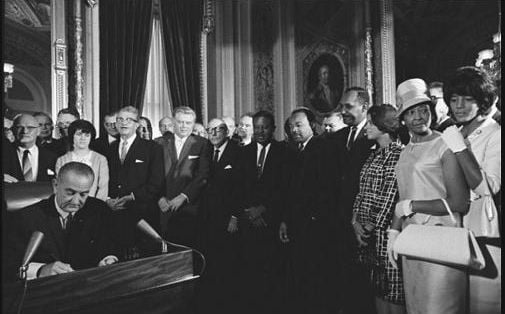 Zephyr Wright, the White House cook, takes loaves of fresh baked bread from the oven in Washington in 1961.

Zephyr Wright watched as President Lyndon Johnson went through the many pens he used to sign the groundbreaking Civil Rights Bill in 1964. He handed her one, saying, “You deserve this more than anybody else.”

Mrs. Wright was born in Marshall, Texas in 1914. She was not a lawmaker, not a Civil Rights activist — on the surface, at least. She was the Johnson family cook, a job she acquired in 1942 when First Lady Lady Bird Johnson went to Wiley College President Matthew W. Dogan asking him to find her a student she could hire to fill the position. She never held another job, retiring in 1969 when the Johnson’s returned to their ranch on the Pedernales River, she chose to remain in Washington D.C.

In the 1930’s and 40’s Wiley College was highly recognized for its academic quality. It was the first historic black college in Texas to be accredited by the Southern Association of Colleges and Universities. Marshall’s Central High School, from which Mrs. Wright graduated, was one of first 12 African American high schools given an” A” rating by the state of Texas. In 1935, its debate team, under the direction of Melvin Tolson, defeated the University of Southern California, the white national champions in an exhibition debate. Its home economics department, re-established in 1941 — added a lecture hall, labs and a mock dining hall and lodging facility. Dr Dogan, in his last year as the college president, undoubtedly wanted the best student available to work for the family of U.S. Congressman Johnson. He chose Mrs. Wright, even though she was still an undergraduate. Some biographical accounts say she completed her degree with the salary she was paid by the Johnson family

Lady Bird’s initiation into the humiliating world faced by the nation’s African-Americans began on their trip from Marshall to Washington DC. They stopped for the night in the famous Peabody Hotel in Memphis, Tennessee. Mrs. Johnson asked for two rooms. The desk clerk said, “We have a room for you but not for her,” pointing at Mrs. Wright.

“That’s nasty of you,” Ms. Johnson said, and they left.

By 1963, following Johnson’s ascendancy to the presidency, Mrs. Wright’s adventures cooking for the Johnsons and her recopies could be found in newspapers from Maine to Hawaii.

Style of the White House cuisine changed with arrival of the South Westerners. One of the first stories to appear came in Mrs. Wright’s hometown paper, the Marshall News Messenger. She was asked what the family would have for Thanksgiving dinner. Turkey would be the center of the meal. The rest of the menu was cornbread dressing in a side dish was ambrosia described as the southern dish with orange sections and whipped cream. She added, “I imagine something like dressing with giblet gravy, whipped sweet potatoes which green beans on the and I usually have cranberry salad and hot rolls of course.”

And on the Wednesday before this great feast, at the invitation of Mrs. Johnson Ms. Wright sat in the family box of the House of Representatives when Pres. Johnson made his first address to a joint session of Congress

There was soon a battle between René Verdon, the Kennedy’s French chef who remained as the official chef White House and LBJ himself. Johnson was known to be anything if not frugal, so among the first things he did was shift from fresh vegetables to the cheaper frozen ones and that infuriated Verdon so he resigned, scandalized and saying he didn’t want to “lose his reputation” by cooking “lousy” frozen foods in the White House. Those disagreements really weren’t about food purchases in the White House according to writers at the time. Johnson wanted the president’s table to represent all the world. Within two years Verdon was out and Mrs. Wright became the official White House chef. Several writers described her as “an exceptionally talented African-American cook who specialized in making virtuosity soul food. ”

Soon her recipes for pecan pie, pop-overs and chili were frequent additions to the food pages of the nation’s newspapers. ”Johnsons Dine a la Zephyr,” read the headline in the Long Beach (Calf.) Independent. The Pedernales River chili recipe was so popular it was printed on cards and passed out to White House visitors.

Over the years as LBJ moved up political ranks, many of his friends, most of them from the South, came to know her. In his book The President’s Kitchen Cabinet: The Story of the African Americans Who Have Fed Our First Families, author Adrian Miller tells the following story;

You hear about LBJ being overbearing person. She gave it right back. About LBJ with Sen. William Fulbright of Arkansas who was one of LBJ sharpest critics during the Vietnam War era Fulbright was at the same White House function and LBJ made a beeline to said you said I have an arrogance of power let me show you a note my cook gave me’ so he pulls out a quote from Zephyr Wright that tells the president to that he should not complain that he doesn’t take care of himself and You gotta eat whatever I put in front of you.’

On July 2,1955, LBJ suffered a heart attack. If he was overbearing and moody before the heart attack the fact that he had to give up smoking and was ordered to lose weight made it even worse. And Lady Bird suffered the brunt of his bad behavior when she tried to scold or cajole him the following doctor’s orders. Zephyr Wright, who didn’t suffer LBJ’s arrogance without giving back in kind. She tried to take some of the pressure off Lady Bird, who was bringing her husband Zephyr’s food from home as he lay in the hospital. But there was more than food on those trays from home. With each meal MS. Wright added a note listing the grams, carbohydrates, protein and fat of each item on the tray, notes LBJ called his “love letters.” Finally, Mrs. Wright got so irritated with Johnson’s complaints that she told him it was up to him — not her — to lose the excess weight. In one of those notes she told him to eat what was put in front of him not complain. At the time he laughed at the notes, but he did what the two women ordered and by the fall had lost a considerable amount of weight — going from 225 to 177 pounds — and quit smoking.

Mrs. Wright’s close relationship with the Johnson family made newspaper headlines again with the wedding of youngest daughter Luci to Patrick Nugent in 1966.Luci was determined to learn to cook, a skill her mother never mastered. Under Mrs .Wright’s supervision Luci said she learned to use spices and herbs and often cooked the entrée and side dishes, including the president’s favorite sauces and pudding. That skill became important when the former president sunk into depression following his retirement and return to Texas. Ms. Wright elected to stay in Washington where she had made her home for most of her working life. Luci, who lived in Austin, would call to check on him.

“There’s nothing you can do,” he lamented. “I just miss some of my creature comforts.”

“Daddy, Zephyr told me I could either get out of her kitchen or learn how to cook. What is it you want, because I can make it and I’ll drive down from Austin every day.”

When LBJ was lobbying for the 1964 Civil Rights Act he would use the Jim Crow experiences of Zephyr Wright and her husband Sammy. They would drive from Texas to Washington DC and while they were driving through the south the Wrights and Johnsons would not be able to eat with them and could not use the restroom in the same place It got to the point where she refused to go on these trips.

“When we drive to Texas and I have to go to the restroom like Bird or the girls, I’m not allowed to go to the bathroom. I have to find a bush and squat. When it comes time to eat, we can’t go into restaurants. We have to eat out of a brown bag. And at night Sammy sleeps in the front of the Car with the steering wheel around his neck and I sleep in the back. We’re not going to do the again.”

This description came about when Johnson had asked the Wrights to take the dogs with them back to Austin. Johnson walked out of the room in tears. The president would use those stories to explain why this law was so needed.

Mrs. Wright, in her interview with Mike Gillette, then director of the LBJ Library, agreed that the Johnsons, albeit Southern, were not racial bigots. Asked about the Johnson’s attitude on race relations she said, “They had to be easy to work with, because how do you think I worked for them for twenty-seven years if they hadn’t been....I think I noticed [their attitude] more during that time when Martin Luther King had that march on Washington. I didn’t go, of course, because I think working for the Johnsons I didn’t associate myself with any of these things that were going on. I kept it on TV, and President Johnson would come in and say, ‘Did you hear what went on today?’ and I said, ‘Yes.’ He just seemed happy with what was going on. He said, ‘Well, this is a step forward for your people.

Wright said she felt as though Johnson was unable to do what he wanted in regard to ending segregation because he could not ignore his constituents in Texas if he expected to be reelected. She could excuse Johnson, but had problems with one of Johnson’s mentors, Georgia Senator Richard Russell.

“When I read some of the things he was saying and doing in Congress then I got a different feeling about him. Here I Am; I’m working for Lyndon B. Johnson. These are his friends. I must accept them the way they are because he accepts them. There is nothing else I can do about it.”

While intellectually she could accept the possibility that his public statements may have been motivated by the same forces that caused Johnson to weaken the 1957 Civil Rights Bill, still she seemed reluctant to tell Gillette her true feelings about the men who led the fight against the Civil rights Bill of 1964

Zephyr B. Wright, 73, former White House cook during the presidency of Lyndon B. Johnson, died April 23 at George Washington University. She had heart ailments,

Ms. Wright, a native of Marshall, Tx., came to Washington in 1942 to work as a cook for the Johnson family when Johnson was serving in the House of Representatives. When Johnson became president on 1963 MS. Wright became Johnson’s personal cook

She retired in 1969 when Johnson left office and she he had lived in Washington since that time.

Her husband Sammy Wright died in11969. She is survived by half-brothers James and Willie Black of Ft. Worth, half-sisters Mary Yancy of Houston, Virginia Clemons of Dallas. Her maiden name was probably Black.