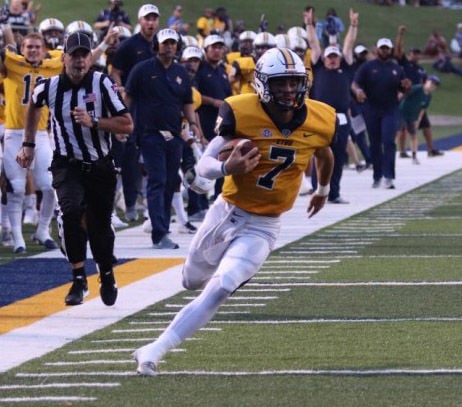 ETBU’s Brian Baca runs down the field during a game last season. 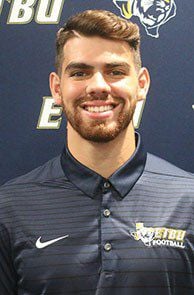 ETBU’s Brian Baca runs down the field during a game last season.

Football has always played a large role in the life of Brian Baca. Now, ETBU’s quarterback is looking to make the most of his senior year.

“In life there’s not a lot of start and stop indefinitely and football is one of them where you have a start and you have an end indefinitely,” Baca said. “I’m trying to enjoy is as much as I can, not trying to be too uptight and having fun, letting things fall and really just go out and not think about anything else, just think about the next play. I’m excited. I think I’ve got a good mindset on our team and I’m ready to be move forward and do the best we can. That starts Sept. 7 in Wisconsin.”

That day is today when Baca and his Tigers will take on Wisconsin-Platteville on the road.

“Probably taking one play at a time,” Baca said when asked what the key is to having a successful game and season. “I look back on a lot of plays my whole college career where I’d throw a pick or something like that and I would just hold on to that and remain frustrated about that but going into my last year, the year after this, it’s not going to matter whether I throw a pick. What matters is I did the best I could. To me, learning to take one play at a time, whether it’s a good or bad play, is extremely important. I’m excited about doing that instead of pressing too much, just have fun in everything, in practice and in games.”

Baca first played organized football in seventh grade but his football memories extend further back than that.

“I have four brothers, so probably playing in the backyard with the youngest two,” he said when asked what his earliest memories were from being around that game. “One of my older brothers would be the all-time quarterback and I’d play against one of my other younger brothers, Scott, and we’d just kind of go head-to-head with it. That was so fun for me. That’s probably my earliest memory of playing football was with them.”

“I think when they were 4, 5, and 6 years old, they practiced in front of a fake microphone,” ETBU head football coach Brian Mayper said.

“That’s what we did as kids,” Baca confirmed. “We didn’t have all those video games. We just had our imaginations and we would play in the backyard and then come inside and have our postgame interviews and stuff like that. It was fun. I enjoyed it.”

His passion for the game grew as he watched his family play and coach.

“I was a fan of whatever team my dad coached,” Baca offered. “Also, out of my four older brothers, three of them played college football and my team was always the one they played for. My brother, Brad, played for Air Force and Sam Houston. Brooks played for Sam Houston and Stephen played Division II at Adams State in Colorado, so those were kind of my teams. As for pro, we never had a team we rooted for but we always watched it. It was more about the teams we were playing for.”

In his years around the game, Baca has learned many valuable life lessons that he hopes to help teach, whether as a player now, and maybe later, as a coach.

“I want to be a graduate assistant coach at the college level, just anywhere I can be,” he said. “I have a passion for young kids, especially young football players. I just want to mentor them and lead them. The game of football teaches you a lot about life that you can teach them. My main goal is to have an impact on young men. That’s what I want to do in life and football is a good avenue to do that. That’s what I want to do like my dad and my brother.”

His brother, Brad, is the head while his dad serves as an assistant coach at Pittsburg High School where the ETBU quarterback played his senior year of high school.

“We 10-2, lost to Argyle in the second round,” he recalls of his senior year. “They went pretty far this past year. I think I was able to see two games in the playoffs. We call each other every Sunday, go over his games and go over my games. My mom and my sister-in-law keep me updated on what’s going on.”

Baca, the youngest of five boys, said he has always been able to get advice from his dad and brothers.

“I stopped getting football advice from my dad, as far as Xs and Os, probably once college started,” he said. “As far as advice, like controlling what you can control, I call him almost every day during football season, just kind of telling him what’s going on, and for my brothers, it’s the same way.

“They’re super insightful as far as what they went through since they all played. My dad has great wisdom as far as how to handle things on the field and off the field. I’ve been blessed with them.

“I wouldn’t be where I’m at without my dad and brothers talking with me about how to navigate my way through college ball because it can be tough sometimes.”

It likely doesn’t come as a surprise to anyone that Baca hopes to continue the family business of coaching.

“He’s a coach on the field,” Mayper said. “He’s super competitive, very intelligent. He’s a competitor. He wants to win as bad as anybody else. He’s a child of God. He’s an FCA leader. He’s a leader on campus.”

Baca will look to lead his team to a 1-0 start with a victory today in Wisconsin. Kickoff is slated for 1 p.m. The Tigers will be off next week and are slated to play their first home game Saturday, Sept. 21 when they play host to Texas Lutheran.