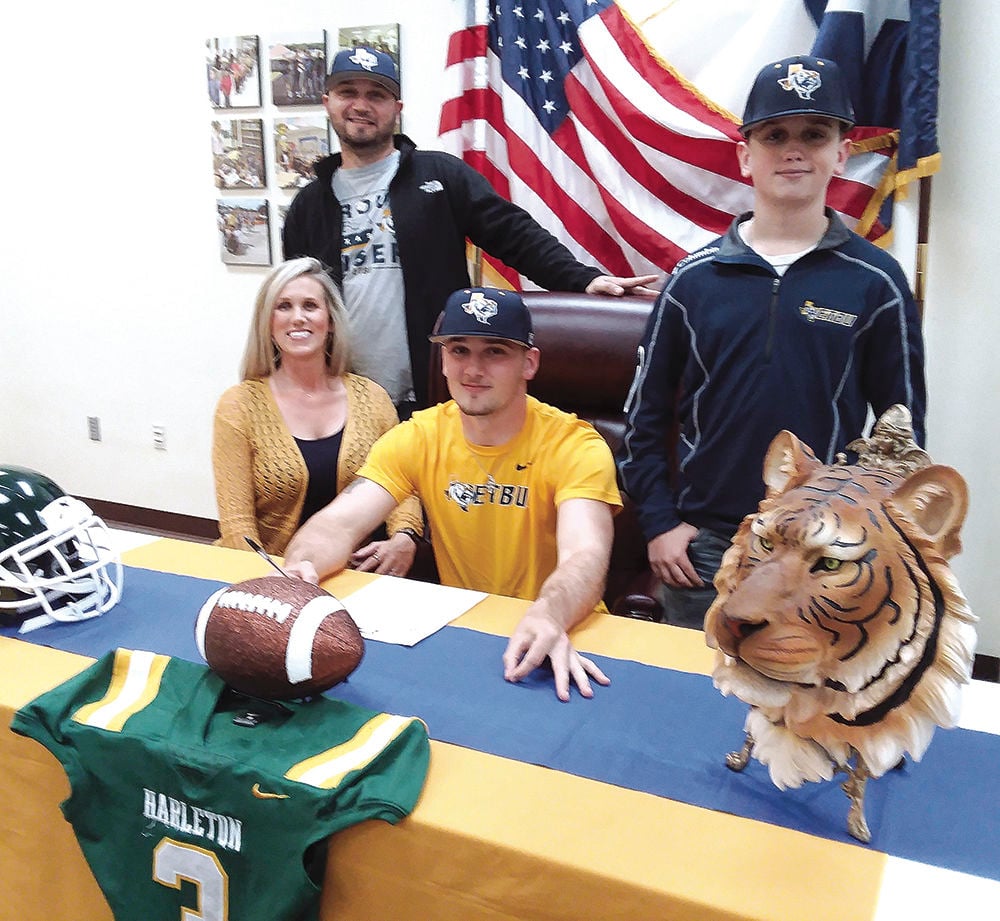 Harleton’s Hunter Wallace poses for a photo with members of his family as he signs with East Texas Baptist University on Tuesday. 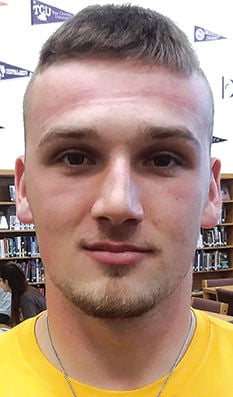 The Harleton two-way standout (fullback and linebacker) loved football, but his body didn’t always cooperate. He was injured in each of his first three seasons, but decided to give the game one final try as a senior.

A breakout — and healthy — season for Wallace and a turnaround season for the Wildcats paid off in a big way on Tuesday when Wallace signed a national letter-of-intent to continue his academic and athletic career at nearby East Texas Baptist University in Marshall.

“To be honest, I did have it (quitting) on my mind several times,” said Wallace, who was named to the Texas Sports Writers Association’s Class 2A All-State Team as a first-team fullback and honorable mention linebacker on Tuesday.

“My dad and my coaches kept encouraging me. They told me stories about guys they knew who overcame injuries, stayed with it, went on and signed, got degrees and did great things. That’s what I wanted.”

Despite injuries, Wallace put up solid numbers as a freshman, sophomore and junior — rushing for a total of 1,578 yards and 11 touchdowns and recording nearly 200 tackles — but injuries and a combined 4-26 record for the team during that span called for some major soul searching.

Things turned around for Wallace and the Wildcats in a big way during the 2019 season, with Wallace staying healthy and becoming a dominant force on both sides of the ball and the Wildcats — under first-year head coach Kyle Little — going from 1-9 to 10-3.

“The talent has always been there,” Little said of Wallace. “We just weren’t winning, and he was hurt some so he wasn’t on anyone’s radar. Now, he’s getting a chance.”

The Wildcats opened the season with back-to-back wins in 2019 to surpass the 2018 win total. After a loss to Linden-Kildare, the Wildcats reeled off five straight wins to close out the regular season and then defeated Deweyville (46-7) and Carlisle (39-27) in the playoffs before falling to San Augustine (47-21) in the regional quarterfinals.

Wallace was a key contributor on both sides of the ball, rushing for 2,103 yards and 31 touchdowns while racking up 124 tackles, 20.5 tackles for loss, four forced fumbles, three fumble recoveries and two sacks.

“He’s a great kid and a joy to coach,” Little said. “He’s one of those kids who doesn’t talk a lot. He leads by example. ...just shows up every day and goes to work.”

The Tigers finished 6-4 overall and 6-3 in the ASC this past season.