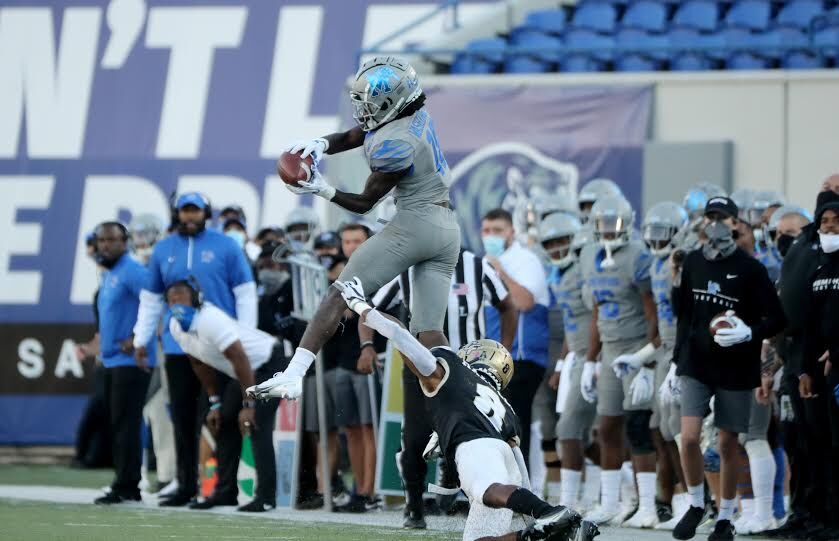 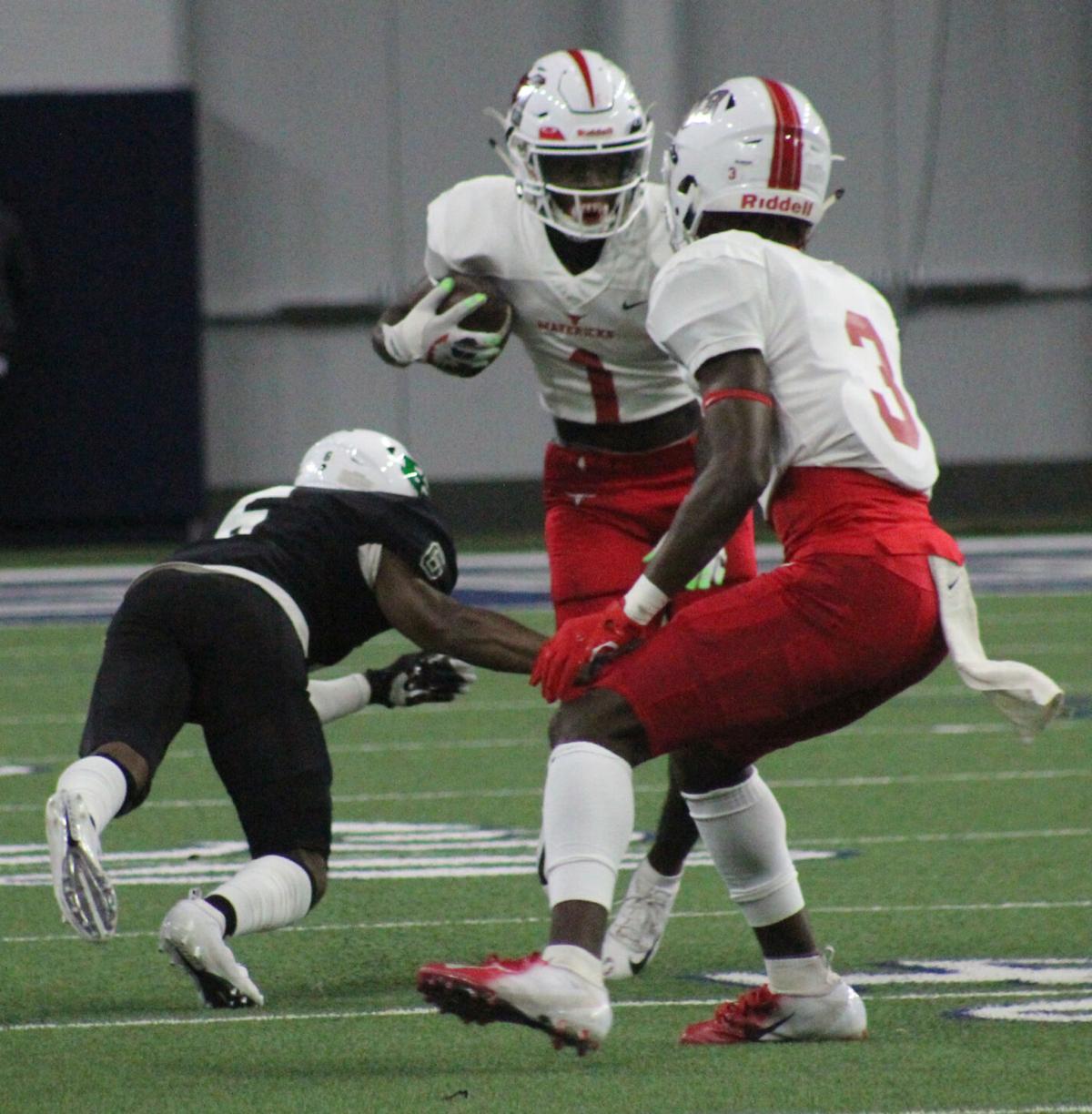 Marshall’s Tahj Washington carries the ball for the Mavericks in his final high school game against Huntsville. 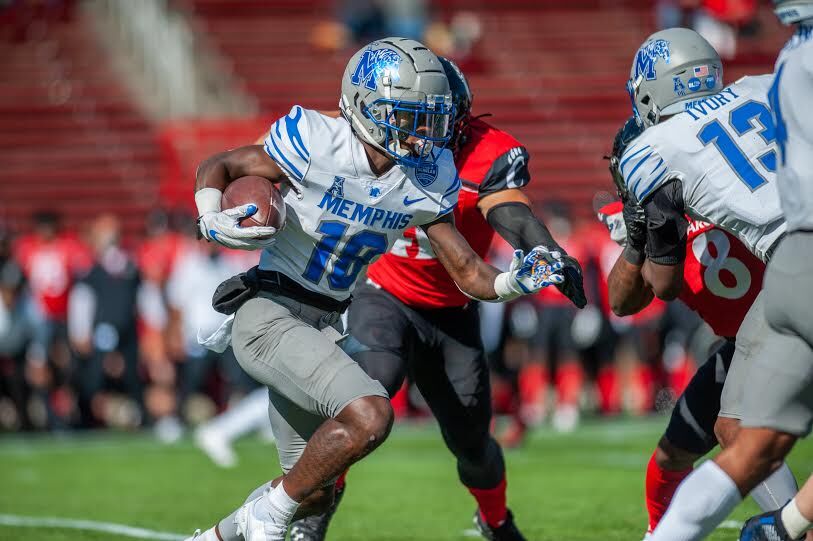 Marshall’s Tahj Washington carries the ball for the Mavericks in his final high school game against Huntsville.

Time was ticking down on the 2018 football season as Marshall trailed Huntsville, 35-28. The Mavericks had the ball on the Hornets’ 19-yard line.

The pass went to then senior wide receiver Tahj Washington who secured the ball, got his toes to the ground in bounds and scored his final touchdown of his high school career.

“Looking back, I would say my last high school game at The Star, that last catch,” Washington said when asked what moments from his high school career stand out the most. “That was a moment I’ll never forget. That was a dream-come true for real. I think every kid practices that in their back yard, no time left, got to catch it in the back of the end zone, toe-tap.”

Unfortunately for Washington and his Marshall squad, the Mavericks fell short by one point, 35-34 and his high school football career was over.

His football career, however, continued at the next level.

Washington saw action in four games as a freshman in 2019 and earned himself a redshirt season. His Tigers finished the year with an overall record of 12-2 and an American Conference record 8-1, earning a conference championship and a trip to the Cotton Bowl.

As a redshirt freshman, Washington is already making an impact. He’s No. 2 in receiving yards for the team with 17 catches for 330 yards and four touchdowns. In last week’s game against No. 7 Cincinnati, the former Maverick scored the Tigers’ only touchdown on a 92-yard reception. He also played a crucial role in helping Memphis come from behind to defeat University of Central Florida 50-49.

“I took my mental game to a whole new level,” Washington said. “Just knowing where to be now, the game is way slower now that I know what to do. I know my assignments and I know the overall concept of our offense and what we’re trying to do.”

His success comes as no surprise to those who knew him as a Maverick.

“We communicate quite often, Tahj and I do,” said former Marshall head football coach and athletic director Claude Mathis who coached Washington in his final two years of high school. “Champ (Mathis’ son and former Maverick who now plays defensive back at Texas A&M University-Commerce) and I and our family, we keep a close eye on Tahj. I communicate with his mom when I can. We’re very, very proud of him. This is nothing new to me. I figured he would do that. I said a long time ago that I expected him to make it. I really did and I think he has a shot to play on Sundays but right now he’s going to have a great college career.”

“I would say the UCF game because we hadn’t beaten those guys in the last 13 meetings,” Washington said when asked what moments from this season stand out the most so far. “So for me to have that big play in a crucial moment, that was something special.”

Washington hopes to continue creating special moments with his Tigers, who currently own a 3-2 record.

“To win out, try to win every game,” he said. “We play to win at the end of the day, so we’re taking it week-by-week, 1-0 every week, one week at a time. I would say just be us, come out and execute. Don’t try to do too much. Just do what we do and we’ll be successful.”

That’s probably something he learned from his high school coaches and he certainly won’t forget his Marshall roots anytime soon. In fact, he said it means everything to be able represent his hometown on this level.

“I grew up in Marshall my whole life from running out before the game to graduating from there,” he offered. “It’s a pride thing. Having everyone supporting me from back home, I’ve just got to keep on for them.”

He added if there’s anybody who wants to be in a situation similar to where Washington is now, “I would tell them work hard, pray and be a student in everything that you do. Don’t be satisfied with just knowing something. Learn more. Try to learn every day.

“I just want to thank everybody for their support,” Washington continued. “I want them to notice. I’m looking and I’m so grateful for them, for real. It kind of makes me want to go harder each day because I know I’m not doing it for myself any more. I know people are looking up to me now. I’ve got some pride about being from Marshall now. I’m just grateful for that.”

“Just his work ethic alone is unbelievable,” Mathis said. “He’s one of the hardest-working kids I’ve ever been around and one of the greatest route-runners. I always tell him he was always tied with one of my receivers that I had at Desoto. Tahj was always one of the best route-runners that I’ve ever coached and he’s right there tied No.1 with another kid. He’s just so gifted but he works so hard to stay that way.”

Washington knows when he straps on his helmet today, he’ll be playing for an entire community that helped him become who he is today, and on the field, he hopes to help his Tigers defeat the University of South Florida Bulls.

“I would say just be us, come out and execute,” he said when asked what the key is to coming away with a win today. “Don’t try to do too much. Just do what we do and we’ll be successful.”

Kickoff between Memphis and USF is slated for 11 a.m. today.